Is that why you’re here? To see if your baby’s having nightmares?

The main takeaway from A Nightmare on Elm Street 5: The Dream Child, found in post-mortems and general hindsight, was that its box office was so poor (less than half that of its predecessor) because it failed to offer the fans what they wanted. I’ll be the first to admit the premise isn’t a great one, or a very original one (hearkening back to the demon offspring cycle, spanning Rosemary’s Baby to The Omen), but it’s at least attempting to stretch itself, for all that director Stephen Hopkins’ approach is decidedly scrappy and the dream sequences are less than elegant.

A lack of elegance when comparing the oeuvre of The Dream Master’s Renny Harlin to that of Hopkins might seem like an incredibly damning observation, particularly with both of them conspicuously head-hunted by Joel Silver for 1990 franchise sequels, but Hopkins’ “ramp-up-the-gore” response to material in both this and Predator 2 wasn’t really what either series needed, nor was it any great loss when both movies fell foul of the MPAA and cuts ensued. Hopkins cited the original as scary and gory when discussing The Dream Child, but it isn’t really much of either. Whereas the motorbike sequence here, Tetsuo by way of Darkman, is unnecessary, both in terms of cheesiness and grisly gross out.

Nevertheless, Hopkins, in his rudimentary way, succeeds in making his Nightmare more nightmarish than Harlin’s; there is a sense of danger here, and combined with a surprisingly effective (since it’s usually obvious in the series, and therefore ineffective) unclear dividing line between reality’s ends and dreams’ beginnings. This is partly down to the script’s conceit, and a muddled one at that, such as the scene of Greta (Erika Anderson) with her grotesque mother and spoiled guests. It appears as an absurdist dream upfront; it’s only as it continues that we realise it isn’t, until it is (and again, it’s no loss that the scene’s excesses were excised).

It seems there were numerous script wrangles en route to screen, with Leslie Bohem’s originally storyline nixed by then-pregnant producer Sara Rischer back in 1986; Bohem (his name can be found adorning such gems as Daylight, Dante’s Peak and The Alamo) takes the final credit, with story contributions going to John Skipp and Craig Spector (at WAG’s insistence). Uncredited are William Wisher (T2), David J Schow (Texas Chainsaw Massacre 3, Critters 3 and 4) and Michael De Luca. And yet, despite this over-egged soup of contributing scripters, there’s more actual story making it into this one than the oft-praised The Dream Master.

Reintroducing the spectre of Amanda Kreuger, complete with “flashback” to the scene of the asylum crime (featuring an unadorned Englund), is an effective place to begin. If this is hampered somewhat by repetition (Amanda’s bones feature this time, as opposed to Freddy’s in The Dream Warriors), incoherence (exactly what Amanda is doing is never very clear) and performance (Beatrice Boepple simply isn’t very good), it scores points for leading us away from the “nightmare kill after nightmare kill” formula. Add to that an effectively unnerving subplot in which the parents of Dan (Danny Hassel) appear, attempting to take custody of the as yet unborn Jacob, and the picture has more than enough going on between sequences.

Kim Newman gave more credit to Hopkins in The Film Yearbook Volume 9 than I perhaps would (“his overdrive style is constantly undercut by the terrible, much rewritten screenplay”). Newman praised the production but damned the plot, whereby the series’ “scripts make less and less sense” and “the story advances through disorientating lapses and leaps as another uninteresting selection of teenagers are brought on and killed off”.

True, the teenagers are never much cop, but they are noteworthy, give or take Yvonne (Kelly Jo Minter), identifiable mainly as the requisite Freddy denier (in this context, though, she represents the masses, because she is deceived). Anderson, later of Zandalee, wins the most grotesque sequence, suffering from her parent’s aspirations for her modelling career. Mark (Joe Seely) is, appropriately in the summer of Batman, a comics fan (“Told ya comic books was bad for ya”), although the a-Ha video-esque rotoscoping isn’t as effectively used as it might have been, suggesting, like so much here, a lack of funds or time; you can see evidence of this in the iffy greenscreen as the diner kitchen rips away behind Alice (the returning Lisa Wilcox) to reveal Dan’s death throes, and in the noble attempt to emulate Escher during the finale (Hopkins namechecks Labyrinth and The Name of the Rose; I wonder if he saw Castrovalva).

Talalay felt for Hopkins, given the least amount of time of any sequel and what she saw as the worst concept. But the concept is only actually lousy when it comes to the need – and by the nature of the series’ emphasis on prosthetic nightmares, it is a need – to show baby Freddy. If he’d been kept as a fear, the results might not have been in line with Elm Street expectations, but it would surely have been more resonant. It certainly couldn’t have been less.

Scurrying around the place, baby Freddy looks like old David Tennant from Last of the Time Lords, and none of these warped versions of foetal form add anything to the picture, conceptually or visually. The general view was that associations with pregnancy just weren’t what teenagers trying to have a good time wanted from a Freddy frightmare, and this is probably true, since The Dream Child opened softly rather than landing large and taking a nose dive.

The most telling sign of how different this one is to The Dream Master, and so undermining expectations, is that you can no longer bask in Freddy’s kill-happy quips. Instead, they seem gratuitous, unfunny and in bad taste. On balance, I think that’s a good thing, even if it’s directly pulling back from what was tickling the series’ fans. There’s even a frightened Freddy in this movie. Not just one stunned that someone is fighting back, but fearful in response to his son’s/nun mum’s mojo.

There’d be a two-year gap before the then-intended series capper, with Talalay ascending to the director’s chair; it would be the most roundly drubbed entry to that point, despite a box-office boost off the back of gimmicky 3D. Freddy was also stepping into a new decade, and it would be accurate to suggest he was beginning to seem passé; from this point on, the series would be mixed with nostalgic impulses (Depp cameos, post-modernism, a vs, and then a remake). In The Dream Child, we were still getting rap songs over the end credits, and Iron Maiden scoring a Number 1 single from one of the tracks. 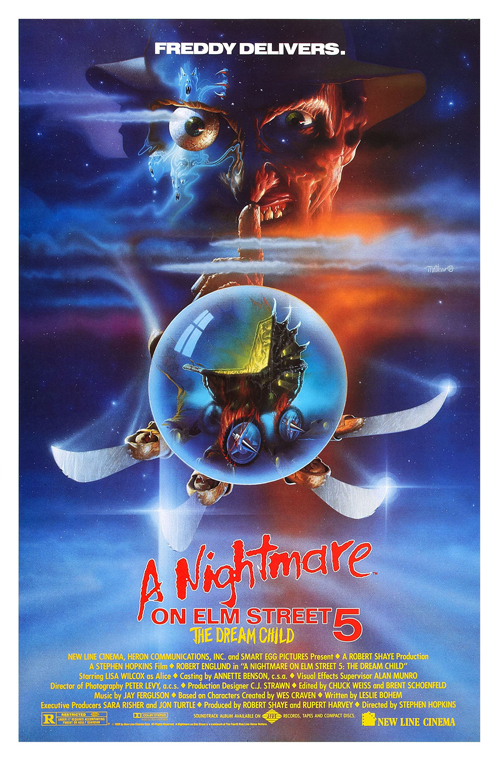 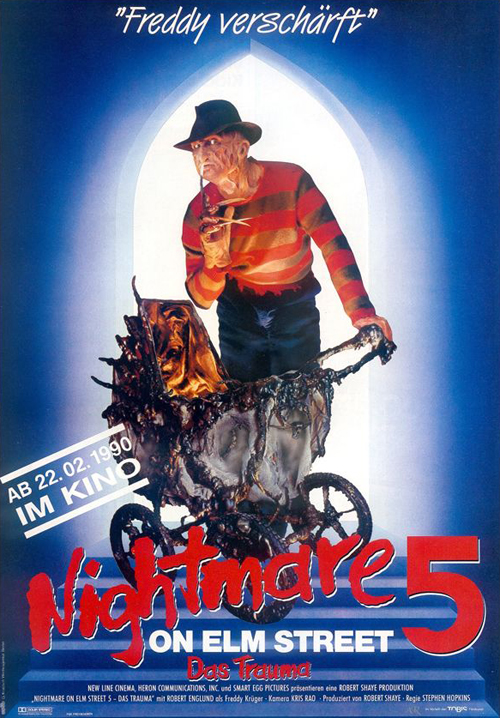