I’m going to get my chimp.

Tim Burton’s Planet of the Apes remake is one of those movies, like Roland Emmerich’s Godzilla, where everyone knows it’s terrible, so there’s nothing much else to discuss. Except that neither of those movies are terrible. They may not be what fans wanted, but in many respects they’re both much more interesting “failures” than the later, heralded incarnations where the studios concerned “got it right” (which, in Apes’ case, entailed getting bogged down in a highly pedestrian human-ape war, and in Godzilla’s, failing to find a means to instil interest in the token human element). Burton’s movie is probably the least Burton-esque picture he has made, and it’s irreversibly crippled by a flat-out terrible choice of lead actor, but I maintain there’s a lot here that deserves respect, up to and including that ending.

Leo Davidson: How the hell did these monkeys get like this?

Arnie was attached to various incarnations of a remake for much of the ’90s, which variously had Oliver Stone, Philip Noyce, Chris Columbus, James Cameron, Peter Jackson, Michael Bay and the Hughes Brothers involved as director/s. The prospect of a remake was initially sparked by Adam Rifkin during the ’80s (he had in mind a Gladiator-type tale and a now very in-vogue – see Superman Returns, Terminator: Dark Fate, Halloween – retconning that would have taken only the 1968 movie as canon). The Stone version, involving The Bible Code, time travel and a lethal virus sounds like unwieldy cobblers (“…one of the best scripts I ever read” according to Fox President Peter Chernin). There was more virus cobblers in the later Chris Columbus and Sam Hamm draft (and, of course, in the one that did eventually restart the franchise in 2011).

Was Burton a good fit for the material? Perhaps for the comedy take suggested at one point. You can see his eccentric eye in parts of the picture – anything involving ape society and its more oddball elements, basically – but otherwise, it’s an alarmingly bland Burton we see here. Mars Attacks! had been a case of expensive career hubris that threw his bankability into question, and he evidently saw the fallout as a state of affairs for which he had to atone; Sleepy Hollow would do so to some degree, but it wasn’t a blockbuster, not in the way Batman was. Perhaps he was unconcerned this pick might damage the Burton brand, dilute its distinctive signature, in view of the freedom a big hit would muster. The irony is that while it was a big hit, like Godzilla, it was seen as a such a creative and audience failure that – in contradiction of the prevailing impulse that will push forward no matter what – it couldn’t guarantee a sequel, less still a brace of them.

Burton was caught chasing a release date, something that made the entire experience one he’d sooner forget (he said he’d rather jump out of a window than make a sequel). But it’s most notable how his instincts appear to have been severely suppressed in order to serve the Fox machine. Even later, when he’d churn out shallow facsimiles of Burton pictures (Charlie and the Chocolate Factory, Alice in Wonderland), you could still see him in the mix, however much they were shallow parodies of himself. In Planet of the Apes, though, he somehow persuaded himself to cast Marky Mark. Sincerely!

Wahlberg, entirely failing to see the irony of being asked to deliver a line like “Never send a monkey to do a man’s job”, shoulders his way through the proceedings with an expression of slack-jawed bafflement. Did I say bafflement? He doesn’t so much look baffled as downright thick. There’s a very limited, short stretch of track along which Wahlberg functions as an actor, and it’s definitely not straight, generic, leading-man parts. Ones where he succeeds only in accentuating his dim-witted side.

I mean, he’s doing something right, clearly, because he continues to hang on in there, but Planet of the Apes finds him at his least presentable, most typified by his being asked to deliver a rallying speech to the humans in the face of an oncoming ape army. When the apes observe “This one seems to be different” you can only assume they mean his natty tailoring, as opposed to his nous or grey matter. Otherwise, it’s difficult to conceive why Captain Leo Davidson should elicit such strong emotions in Tim Roth’s General Thade or passionate glances from Helena Bonham Carter’s Ari. Estella Warren is more his league, as vacuous, pneumatic, bee-stung-lipped slave girl Daena.

But maybe the joke was on us? Maybe Burton purposefully cast the least charismatic bunch imaginable as the humans. Hence Kris Kristofferson, no one’s idea of scintillating, unless you count prolific follicles and tiny, tiny eyes as such, as their other notable representative. If so, it ends up back on him, as the picture is fatally undermined in terms of dynamic. With that and having to stage grand action sequences – never his strong suit, although they’re reasonably competent here, where ten years earlier they were borderline risible – there’s a point post-Leo discovering the truth of what is going on and returning home where the picture rather loses all hope, and certainly any sense that anyone believes in what they’re making.

Elsewhere, however, there are some undeniable saving graces. Philippe Rousselot’s cinematography – his first work with the director – is rich and textured, and the production design and costuming are memorable and distinctive. The picture looks great, basically, particularly when it’s on soundstages (not something you can often claim). Burton likes these closed worlds, of course, and would score a major hit soon thereafter with one in a chocolate factory.

Also in its considerable favour are the ape performances. If Michael Clarke Duncan is a little on the imperviously imperious side as gorilla Colonel Attar, Roth is absolutely sensational as Thade (it’s suggested he lost out on Severus Snape due to this one). All in-your-face malevolence and rage, Thade is Christian Bale by way of Jack Palance, and his posture and movement attest to an actor who has clearly thought a great deal about how to make the most impact from the potentially incredibly constrictive encumbrance of all those prosthetics and outfitting.

Bonham-Carter is really good too, this coming at a point post-Fight Club where she was consciously rejecting those English rose, Merchant Ivory parts and showing she did actually have range. She’s just unfortunate she had Wahlberg for her “romantic” interest (Fox nixed anything overt, but it’s very obvious she’s jealous of Daena, and Daena’s jealous of her. And Leo is all round perplexed by it all).

Paul Giamatti’s notable also, in the comedy orangutan part (I can’t see how aspirin are going to mean anything to him, let alone junior apes, but fine). The platitudes about tolerance and difference can only be rendered rote in the thirty years between the original and this version, and much of the picture’s “politicking” in is similarly undercooked, from Thade declaring martial law (it isn’t anyway?) to society readjusting itself to cross-species inclusivity super quickly. At one point, Leo opines of humans “The smarter we get, the more dangerous our world becomes” (which is, yawn, exactly what they want you to think).

Lisa Marie’s in it. So is David Warner (his makeup’s disappointing, and he lacks the punch of his previous prosthetics-shrouded part as a Klingon). Chuck Heston cameos, as the keeper of the secrets and Thades dad; Roth said wouldn’t have appeared if known which is, well… maybe he’s mellowed since into the kind of guy who’d perhaps be willing to discuss differences of opinion reasonably with others, rather than flounce about, disinterested in nuance or the individual behind the disagreeable viewpoint.

One of the big bones of contention with Planet of the Apes, contributing to its reviled status, is the plot, and twists thereof. Now, I intend to offer no earnest defence of the movie’s main structure, which operates functionally, on the landing-capture-escape-reveal level, and little more than that (credited to William Broyles Jr, Lawrence Konner and Mark Rosenthal).

I don’t see, however, that Interstellar deserves raves for its serious science (whatever that means) approach while Burton’s Planet of the Apes deserves brickbats. They’re both operating in the time-wimey territory of cause and effect getting scrambled, rather depending on where one is and at what point in relation to whatever one is observing. Planet of the Apes tips the wink to things messing up with Leo’s commander (Chris Ellis) during the early sequences, showing him as an old man, and the reveal that their crashed ship spawned this topsy-turvy society is a reasonable refiguring of the original (complete with Star Trek: The Motion Picture-style compression of names in order to create new ones: Caution live animal).

This leads, germanely, to the WTF ending where Leo arrives safely back on Earth, only to discover Thade got their first. Which is, after all, what Leo did earlier, when he was giving chase to Pericles. It’s a completely reasonable cliffhanger. Okay, less clear is how Thade managed to get himself a space vehicle in order to travel to Earth, and from thence take over, and that puzzler may be part of the reason Fox gave up on a follow up, but I see no reason someone couldn’t map out the minutiae. The graft needed is no greater than the retcon of Cornelius and Zira escaping their doomed planet in the second sequel of the original series.

We also have the picture’s thematic stratum. Ideas of equality and difference are passé by this point, so we should be focussing instead on the perils of technology and science. It is science, after all as Leo so adroitly puts it, that has made the world so dangerous. Pericles is a state-of-the-art augmented monkey; “he’s gene-spliced, chromosome-enhanced… He can handle it”. The apes of Burton’s Planet of the Apes are effectively a vision for humanity’s future, unrecognisable to us now (one might do a straight swap for Greys, if one entertains the suggestion that they represent the consequence of our transhumanist, devolved, degendered future). These apes, of course, are designed to reflect our own presumed superior stature in a fairly cheap-shot manner (“Is there a soul in there?” asks Thade, peering down a human’s throat). And for the apes, as for us, science is shown to be a whole lot of theoretical fudging in order to project a prevailing narrative: “Our scientists do tell me these humans have terrible diseases”.

Is Planet of the Apes a worthy reinvention? No, but neither is it a total loss, and it’s at least as interesting in content as the recent trilogy. They have in common less than effervescent human performers (be it James Franco or Jason Clarke), and I’ll take the Rick Baker makeup, the costume design work and studio exteriors over photoreal CGI and authentically dank woods any day.

The real problem with the new trilogy is that it stuck so closely to a “realistic” rendition, it finally lost sight of the concept’s giddy genre flourish. The real problem with the Burton movie, though, is a director without a strong desire to tell that story, a star lacking chutzpah, and a screenplay with a solid enough variation on the core concept, yet an absence of any strategy for developing it as a singular movie script, let alone a trilogy (or beyond). Nevertheless, this is far from a disaster. 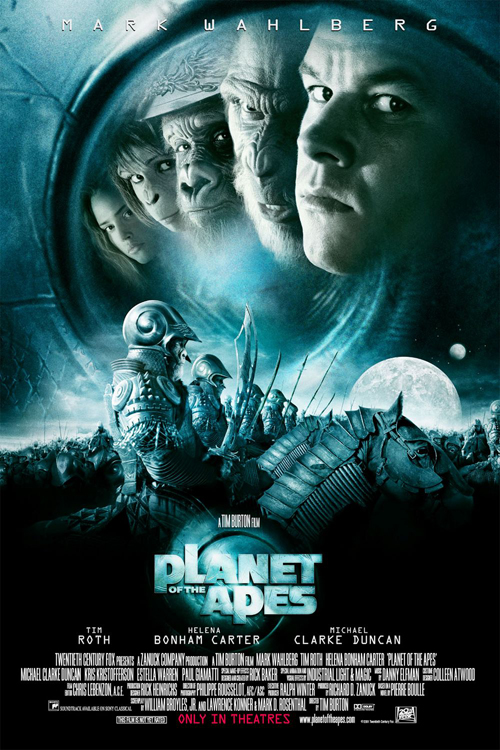