Last Night in Soho is a cautionary lesson in one’s reach extending one’s grasp. It isn’t that Edgar Wright shouldn’t attempt to stretch himself, it’s simply that he needs the self-awareness to realise which moves are going to throw his back out and leave him in a floundering and enfeebled heap on the studio floor. Wright’s an uber-geek, one with a very specific comfort zone, and there’s no shame in that. He evidently was shamed, though, hence this response to criticisms of a lack of maturity and – obviously – lack of versatility with female characters. Last Night in Soho goes broke for woke, and in so doing exposes his new clothes in the least flattering light. Because Edgar is in no way woke, his attempts to prove his progressive mettle lead to a lurid, muddled mess, one that will satisfy no one. Well, perhaps his most ardent fans, but no one else.

Wright recounts how he was told by an Empire reader he should make a movie that passed the Bechdel Test (he also related this incident to the now uber-woke Empire, so woke, it can barely go a paragraph without mentioning toxic males as well as boasting a monthly “Black in Focus” column; well, of course it does, now it actually has a black journalist on the staff). And then by someone else that he should make Baby Driver with a female lead (but presumably without Kevin Spacey). And being essentially malleable – maybe not enough for Kevin Feige, but infinitely more so than Woody Allen or the Coen Brothers when it comes to the woke police snapping at one’s heels – he willingly capitulated. He even invoked the “comfort zone” measure of striving to improve himself.

Baby Driver succeeded – for the most part – because it unspooled from Wright’s own heartfelt but endearingly shallow pop-visual sensibility, strung together as it was by music and movie tropes. Even the difficult-to-love Scott Pilgrim vs. the World was similarly cued from a visual spark – making a comic book real. But if it’s tempting to suggest he was only truly in his element when collaborating with Simon Pegg – there’s a reason Shaun of the Dead and Hot Fuzz stand up, or did last time I looked, and it may not be dissimilar to Danny Boyle and his homegrown first couple of movies – one needs only look at World’s End to recognise that ship long since sailed, before being capsized by unfettered success.

The consequence of his combination of a surfeit of style and an eager-to-please personality is that one never gets the sense Wright quite knows what, or who, he’s making Last Night in Soho for. Apart from appeasement. Yes, there’s a sliver of the autobiographical in the country girl (Thomas McKenzie’s Ellie) who heads for the big city of dreams. And Wright essays the London College of Fashion’s alpha bitches like he’s been on the receiving end of similar treatment; Jocasta is effectively ghastly, and well performed by Stephen Woolley’s (Palace Pictures) niece Synnøve Karlsen.

There’s a scene during the movie’s tiresome second half, towards the end of Ellie’s library hallucinations, where she discovers she’s about to stab Jocasta with a pair of scissors, and there’s a sudden glimmer of another, altogether more palpable palate. Alas, it quickly washes away into genre dishwater. Likewise, perhaps the most coherently cued sequence – as in, one you can see Wright fully embracing, rather than diligently piecing together like the parts of a homework project – is the Halloween party where Ellie’s drink is spiked and she loses herself to Happy House.

Ellie, obsessed with all things Swinging Sixties, discovers she can timeslip away from all the present-day hideousness into the idyll of that era, complete with Thunderball and Cilla. The transportive cues are from literature, of The Lion, the Witch and the Wardrobe or The Box of Delights, but Wright perversely rears away from period veneration. He wants, feels he is required, has been told to, put a message in there. To lend himself support, he has enlisted Krysty Wilson-Cairns as co-writer, presumably hoping he wouldn’t be able to cop all the (toxic white male) blame for failing to pass muster. But Wilson-Cairns previously worked on the wafer-thin 1917, after contributing to the self-descriptive Penny Dreadful, so the pedigree she brings is itself suspect.

Ellie finds herself symbiotically doubling up with Sixties Sandie (Anya Taylor-Joy), who is as confident as she isn’t, and observes/experiences her situations and scene. Soon, Ellie has undergone a surge of creative energy at university and is dying her hair blonde. Alas, the lustre of swinging London wears off almost immediately, with chipper Jack (Smith) leading Sandie into a life of seedy, predatory, toxic (yes) white masculinity.

The first forty or fifty minutes of Last Night in Soho do at least allow Wright a flourish of visual exposition, replete with his expected stylistic aplomb and accompanying musically synched virtuosity. But there’s never once a sense that the weirdness on display, as the walls of Ellie’s mind begin to peel apart in the grip of vaunting hysteria, is the result of an unbridled imagination; once it becomes clear that hallucinations in movies are only hallucinations, they tend to have a limited shelf life (see Jacob’s Ladder or The Lighthouse). Wright’s plotting is borne of wrestling with the dilemma of “What would be weird here?” which inevitably leads to pedestrian scenes of ghostly zombies haunting Ellie in a library. I half expected them to materialise into Cybus-men.

Indeed, the opening scenes are desperately flat, as if Wright’s been taking his cues from Chibnall era Doctor Who, ladling on the character exposition (although, there’s precious little character here) and yielding stilted performances, since there’s no crutch of arch/comedic measure to be milked from his performers. The course he sets is un homage, to Polanski, to Giallo, but after the set up – à la The Avengers’ Escape in Time – he has no place to go.

That the movie ultimately reveals itself as a female revenger in a sub-sub-Promising Young Woman vein, by way of a Grand Guignol slasher, is risibly after-the-fact. It appears to be exactly what it is, a last-ditch attempt to glue the proceedings together dramatically. But in his announced task of woke-ing his tale up, Edgar perversely manages to shine a spotlight on female characters with a dearth of substance, prettified in ways that are purely cosmetic (or fashionable) and lent character twists are that are demeaningly puerile.

Landlady Diana Rigg is revealed as present-day Sandie, a non-sequitur plot-twist version of Death Wish where her actions are entirely justified (as Ellie keeps telling her), because men are all bad (well, white ones), and “It felt right, Ellie”. We’re supposed to commiserate with her because “I’ve been in prison all my life”. Quite beside the turgid banality of the twist, it fails because there’s nothing underpinning it. Wright has established no murder mystery to be solved (Ellie’s vision of a stabbed Sandie is hardly that), or formative character to be traced, so making her a murderer is unearned. It’s cheap.

The one twist that plays – which isn’t a vote of confidence in it – is the reveal that Stamp’s spry old fella isn’t present-day Jack. Smith hoovers up an extended riff on his In Bruges deleted scene, but aside from the cockney accent has absolutely nothing to chew on. Instead of Jack, Stamp is revealed as the older version of a two-minute Sam Claflin cameo, and so becomes throwaway and borderline meaningless. And there’s something rather distasteful about the way Wright uses these icons, Rigg and Stamp, denigrating them with such sullied parts.

Bafflingly too – well, except that it’s okay, as she’s a female lead, so she’s “good” – Ellie gets away scot-free with being a complete loony, nearly stabbing a fellow student in the neck, getting an innocent old man killed (all white males are toxic, except for the one who’s a red herring) and her boyfriend stabbed. Let’s celebrate her! And she can celebrate Sandie, blowing her a kiss from the beyond of her mind. Michael Ajao is absurdly antiseptic as decent male John – he’s allowed, because he’s a person of colour – offering torturously sensitive lines like “I’m a good listener if you ever want to talk”; for his pains, he nearly falls foul of a #MeToo case of mistaken rapist.

While Taylor-Joy is little more than a cut out, McKenzie delivers an overdose of startled, squeaky mouse, crossbred with a Robert Smith panda. She was very good in Leave No Trace a few years back, but Ellie does her no favours at all. I’d hesitate to blame her, though. She’s stranded high and dry, assaulted by her director’s noble attempts to find his bruised feminine for two hours. Perhaps Wright wished to show the versatility of a Guillermo del Toro (although that side of the director comes under increasing doubt the further he strays from his Spanish language days), but all he’s really showing is his kinship with another shameless adolescent – as Jeff Wells put it, “47 going on 14” – who once attempted to show off his range; remember Zack Snyder’s Sucker Punch?

Wright is a sexless fellow, so it makes sense that he should relate sex to horror, and not in the way De Palma exhales libidinous threat, but as someone compelled to present it as unseemly and really quite repulsive. The manifestation of men, the seedier the better. Is it better to make a rather bad, shallow movie about a woman’s experience than not to make one at all? I’m doubtful, but I’ll reemphasise my initial point. There’s no shame in Wright inhabiting an oeuvre that suits him and being very good at it. Unlike Tarantino, another overgrown adolescent, Wright only has a visual voice, not an authorial one; when Tarantino homages, it invariably feels as if he’s making a genre his own. Which may be why he is celebrated by his peers. All Last Night in Solo can boast is an empty stylist. 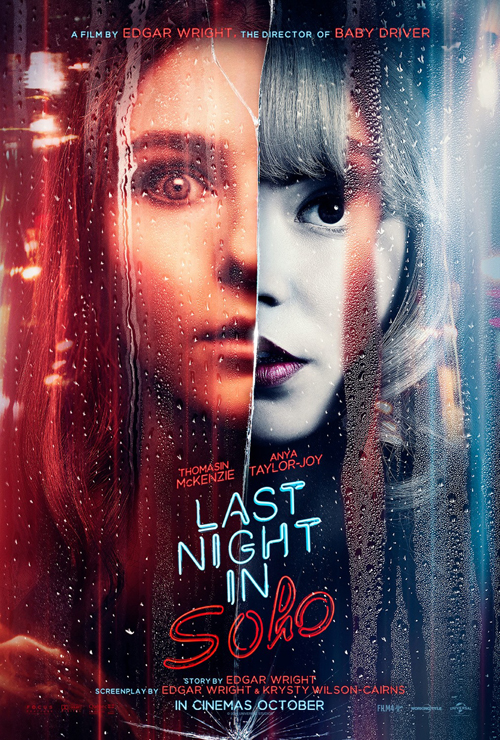