Dark Disney? I guess… Kind of. I don’t think I ever got round to seeing this previously. The Fox and the Hound, sure. Basil the Great Mouse Detective, most certainly. Even Oliver and Company, so I wasn’t that selective. But I must have missed The Black Cauldron, the one that nearly broke Disney, for the same reason everyone else did. But what reason was that? Perhaps nothing leaping out about it, when the same summer, kids could see The Goonies, or Back to the Future, or Pee Wee’s Big Adventure. The Black Cauldron seemed like a soup of other, better-executed ideas and past Disney movies, stirred up in the titular pot and slopped out into an environment where audiences now wanted something a touch more gourmet.

It probably doesn’t help any that it’s very similar to Legend (which actually came out afterwards, but you get the idea). Ridley Scott’s movie was hardly the high-water mark in originality or sophistication either, but at least its expense was all up there on screen. The Black Cauldron’s animation is a mixed bag, intermittently very impressive, but also far below the standards Don Bluth, having absconded, was eking out during the decade, so making the Mouse House realise they were trailing very badly. Part of the problem is the uninspired character designs, be they the comic relief, the villain or the heroes. The Horned One (John Hurt) is exactly what he says on the tin, whereas other approximations (Tim Curry’s Darkness or Skeletor) at least had some degree of chutzpah on their side.

It seems The Horned One is something of a composite of the source material; Disney purchased Lloyd Alexander’s The Chronicles of Prydain trilogy in 1971 (and then repurchased it in 2016). It’s actually five novels, based on The Mabinogion – see also Alan Garner’s The Owl Service – and it has been rumoured everyone’s favourite wokester Rian Johnson may limber it up for the remake. This version took until 1980 to enter production, at which point Disney was undergoing an existential crisis – appropriately, since it seems Alexander was preoccupied with existentialism – and second guessing their target audience. They duly, mostly, failed to hit that target for a good half decade as they strived in vain to keep abreast of the changing face of ’80s cinema (The Black Hole, TRON, The Watcher in the Woods, Something Wicked this Way Comes, Return to Oz were all, to a greater or lesser degree, financial disappointments).

Tim Burton had worked on The Black Cauldron, and the animation was, in conceptual form, an attempt to appeal to more than just the junior viewers. Disney understandably wanted a slice of that broader audience base flocking to the Spielbergs and Lucases. Part of the problem, it seemed, was the Disney old school versus the new young punks, leading to a neither-flesh-nor-fowl picture that supplied many of the Disney standards yet also a less edifying streak.

Notably, exec Jeffrey Katzenberg, newly appointed and later to hog all the credit for resuscitating the studio’s animation arm, blanched. He demanded the excision of ten of the blackest minutes of The Black Cauldron (the most infamous of which being a man mauled by one of Cauldron born before rotting away into one of their number). It became known as “the movie Disney tried to bury”, and if you doubt a studio would wish to do that, it’s accepted and expected practice for the new guard to throw away potential jewels they’ll get no credit for (see Columbia and The Adventures of Baron Munchausen). There’s talk that, in original form, this was destined for an R rating, but I’m dubious; it’s hardly Ralph Bakshi (it earned a PG, but a U in the UK).

Whatever development process the picture was wrung through, it came out feeling rather bereft of passion and distinctiveness. The ickier elements – the un-dead sequence – are memorable, but most of the rest seems little more than a knock-off. A comedy mentor type (Freddie Jones’ Dalben), a comedy minstrel (Nigel Hawthorne’s Fflewddur Fflam), an earnest but bland hero (Grant Bardsley’s Taran), a princess who barely gets a look in (Susan Sheridan’s Eilonwy).

The magical oracular pig (Hen Wen) seems like a sparky idea, but said pig doesn’t have much going on beyond looking cutely porcine. There’s a magic sword (read lightsaber). There’s comedy evil minion Creeper (Phil Fondacaro) and comedy friendly sidekick Gurgi (John Byner). The latter is a like a hairy Gollum, but slightly less psychotic, inclined to refer to himself in the third person and discuss “crunchings and munchings”.

More than a degree of dark Disney, I was struck by pervy Disney, however. We’re veering towards a category The Young Ones’ Neil referred to as a Disney Nasty. Obviously, this is the studio that would flash Jessica Rabbit’s snatch a few short years later, but I didn’t expect the Carry-On shenanigans presented here, as a buxom witch gets all feisty with Fflam, causing a string to spontaneously snap on his lyre. And then, the leading invitation “You don’t mind if I pluck your harp?” Following which, transformed into a frog, Fflam plunges into said witch’s cleavage. In closeup.

I don’t think one can really lay a particular finger of blame at Disney not knowing what to do with the movie (although, it would be nice to see the unsullied cut, to get a better idea of what it was they had in the first place). Very few were actually showing acumen getting fantasy onto the screen at that time, despite it being a relative boom period. Peter Yates went belly up with Krull a few years before, and Lucas would do the same with Willow a few years later. Ridley had dynamite visuals, but lacked the inner poetry to make a wafer-thin story work. It seems The Black Cauldron’s problem, in part, was shearing off the more thoughtful elements of the source material, such that what we we’re left with feels perfunctory. As if it got so far down the line in development that the makers lost sight of it is initial appeal. 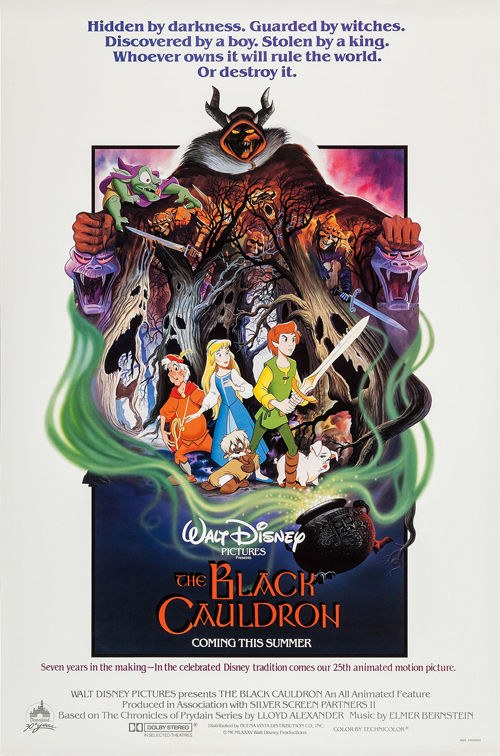 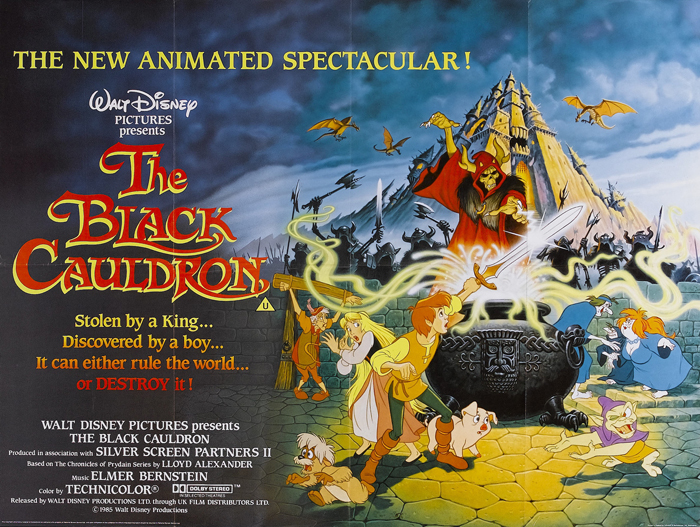