What are we gonna do? Hijack a space shuttle? Put rockets on our backs?

Okay, fair dues. They went and did that thing clearly ­– initially – suggested in jest. They sent F&F into space. And you know what? It’s no more ludicrous seeing Ludacris and Tyrese in orbit, in a rocket car, than Elon Musk informing us of his space Tesla, “You can tell it’s real because it looks so fake”, or Jeff Bezos lifting off in his Dr Evil-esque penis craft with a fictionally fulsome starship captain. The rest of the movie? Far from the series’ peak period (5-7), but not without its engaging interludes, bloated action behemoth that F9 is.

Roman: Is that a Pontiac Sierra, strapped to a rocket engine?

The gleeful wackiness of the spaceflight sequence fits into a generally meta sensibility promulgated by returnee Justin Lin’s take on the series, and is spearheaded by Tyrese’s Roman and his realisation that nothing this gang, I mean family, get up to makes a lick of sense. “How the hell are you not dead?” he questions early on, adding that their antics are “damn near impossible”. “That’s what I’m sayin’. We are not normal”; it seems they are invincible, something that will only be underlined by Han’s resurrection.

As such, when Tej (Ludacris) sagely informs Roman on “lift off” that “As long as we obey the laws of physics, we will be fine, okay?”, before adding “It’s just all math and science”, it’s entirely in keeping with the established approach, yet it’s still hard not to double take, Musk style, at the essential silliness of all this math, science and laws of physics. It’s thus entirely appropriate that, after smashing up a satellite – you’ve got space travel as an initial rabbit hole, and then you have satellites as a further one – they are rescued by the ISS, renowned for its amazing facility for showing authentic space-based footage that isn’t at all shot against green screen.

For me, the delirious daftness of this series reached its zenith with F7 (directed by James Wan), but F9 does its best to throw in a share of bug-nuts sequences besides the space spectacle. Early on, there’s a drive through a minefield, across a disintegrating bridge and Dom swinging through the air, in a car, with the greatest of ease (collectively, they’re the incidents initiating Roman’s initial disbelief). Later Ramsey (Natalie Emmanuel) is gifted an inspired action set piece dedicated to someone who can’t drive, while an over-active magnet adds to the general abandon.

There is a problem in all this, in that, while the assisted action is better rendered than The Matrix Reloaded’s crazy leaps, the human-on-vehicular jumping and leaping and bounding leaves one no less conscious they’re watching a world of full-on pixels (there’s zero suspension of disbelief that these aren’t CGI avatars leaping onto CGI vehicles, however passable the effects). That slightly passé approach to the visual sheen is reflected in an undeniably sluggish bloat in the storytelling, if you must insist on calling the stitched together canvas that.

If IMDB is any indication, there’s been some fairly fierce pushback against this instalment (I make the running, from highest rated to lowest, 5, 7, 1, 4/8, 6/3, 2, 9, with only the last two scoring below 6/10). It probably doesn’t help that key crowd-pleasers Dwayne Johnson and the Stath are absent (although, the latter cameos). It surely helps even less that Dom’s retconned brother Jakob is a less than essential presence as encapsulated in the maxi-jawed John Cena.

By most accounts, Cena has been making a popular fist of his segue from wrestling to movies, but I have to say the Toretto brothers’ historic feud left me largely indifferent. Of course, they going to make up. Of course, there’s a misunderstanding at the root of their conflict. It’s a vaguely pleasant surprise not to get horrifically plastic de-aged Vin and Cena as their 1989 selves, but I’d guess that’s less an aesthetic decision than down to Vin getting Vin Jr to play himself (and it’s a perfectly respectable performance).

Roman: See? What did I tell you? Not even a scratch.

Han (Sung Kang) is back, of course, with some piffle about Mr Nobody (Kurt Russell in strict cameo form) helping him to fake his own death. I’ve never been clear why Han is so popular, as I can’t for the life of me recall him doing anything of note. Apart from not being killed by the Stath, it now seems (the mid-credits sequence is a bit of nothing, since Han is hardly going to have a beef with Deckard Shaw for intentionally ensuring he lives). In contrast, Lucas Black is also back (both debuted in Tokyo Drift, as all F-ficianodas will be more than aware), and he’s always an amiable presence, although, for someone who was one of only three actors to lead one of these movies (not counting the spinoff), there seems to be a wilful intent to keep him well away from the centre frame.

Cipher: No, Yoda’s a puppet, with someone’s hand shoved up his ass.

Elsewhere, the lack of villainous flourish doesn’t help matters any, represented by Jakob, Otto (Thue Ersted Rasmussen) and a returning Charlize (as Cipher). Theron, despite a prolific pudding bowl, is in entirely unengaging territory, as happens fairly frequently lately when she takes on blockbuster roles (from Huntsman to The Old Guard, Fury Road being an honourable exception). Helen Mirren shows her how it should be done, although it helps that her character has some attitude and that Vin clearly adores her (“Don’t get yourself killed, okay? You’re my favourite American”).

Michael Rooker and Shea Whigham crop up too. Michelle Rodriguez is there, of course, and so is, rather awkwardly, Jordana Brewster, looking ever more rictus. Brian arrives at the end too, but at least they have the good taste (even if I’m unsure that can be said to apply to these movies on any level) not to show his face.

As ever, the fatal mistake is in thinking some of the characters (Dom, Mia, Han) are actually interesting or compelling. On the other hand, anyone armed with a sense of humour or sniff of personality comes off well, and as bloated and unwieldy as F9 undoubtedly is, there are just enough enjoyable interludes to edge it ahead of The Fate of the Furious.

I guess I ought to mention the plot. The Ares McGuffin is mightily blah as blah world-shaking McGuffins go (it can hack into any computer-controlled system). On the daftness scale, though, it scores, as there are two devices, and it incorporates human DNA (Anna Sawai’s) as its final component. I’m sure everyone was as WTF? as I at this. But who knows, perhaps the makers were told any civilisation-compromising weapon needed to include the genome as part of its modus operandi. It would be very current, after all.

In some respects, these movies are taking off (literally) from where the Roger Moore Bonds left us in terms of overblown spy(-ish) spectaculars with dastardly, deranged plots. What they lack is a central actor as thoroughly winning as Rog, although respect is due to Vin for remaining poker-faced throughout the ever-more-absurd antics. Lin has said the last two (yeah, I know, where will we all be by then?) will be more down to Earth. Which, as Tej and Roman discovered in F9, most definitely has a curvature. Since I’m rarely given to ponder these movies after seeing them, and have never revisited any, my ranking, in descending order is quite possibly flawed. But here it is: 7, 5, 6, 9, 1, 8, 2, 3, 4. 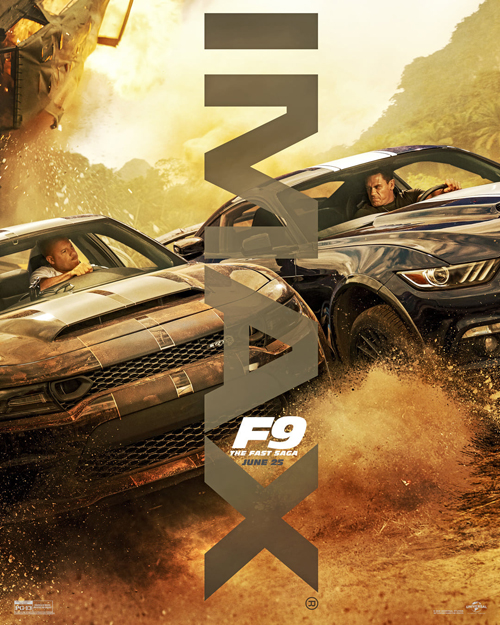