The unquiet spirit must be laid to rest. It is an abomination to God, and to man.

It’s easy to see why the third movie in this franchise proved such a big hit. It both boosted the inventive dream sequences/kills in a no-brainer way – Freddy’s Revenge is more than a little “Doh!” in that regard – and added to the lore. More astutely still, it made Freddy Kreuger a quip-meister, from whence his reputation was sealed. But what’s most notable, perhaps, is the manner in which, rather than simply piling on the set-piece deaths the way Jason Voorhees was wont, A Nightmare on Elm Street 3: Dream Warriors apes the form of a classical horror movie in plotting terms. Ultimately, this aspect peels apart, failing to satisfy, and director Chuck Russell only rarely elicits either true narrative tension or genuine suspense, but Dream Warriors is nevertheless the most satisfying outing to this point.

The Elm Street series is surely responsible for forwarding the “layered reality” idea in the consciousness like no other in cinema. During the ’80s, everyone knew who Freddy was and what he was about, even if they hadn’t the remotest intention of seeing one of his star turns. The (lower) astral is a force that that lives alongside and is capable of intruding into the visible, the tangible, the manifest physical.

Elm Street has tended to operate fast and loose rules in this regard; Freddy’s powers generally exert themselves when his intended victims are no longer in a wakeful state and are thus victims to the subconscious. Dream Warriors explicitly denies and rejects the “knowing” of “science” (that is, the pseudoscience – or rather philosophy – that is psychology) with regard to this realm and spuriously positing rational explanations for the invasion of the sleeping mind. Perhaps that knock-on of such spurning was Frank Darabont – in his feature debut – and Chuck Russell – previously scribe of superior dream manipulation movie Dreamscape – feeling they didn’t need to observe coherence themselves (they also pretty much threw out Wes Craven and Bruce Wagner’s original screenplay). To wit.

Mary Helena: If your only faith is science, doctor, it may be you that’s laid to rest.

The Freddy Kreuger backstory here is a most definite bonus, even if, by its nature, it leads the movie down a trail of standard (or, yes, classical if you like) horror tropes: crucifixes; holy water; ghostly apparitions. The scientific sceptic Dr Gordon (Craig Wasson; no panty-sniffing for Craig this time) is led on a dance by a ghostly sister, who informs him, in an indelible description, and as Nigel Floyd in Time Out put it “a suitably tasteless account of his conception”, that Freddy is “The bastard son of a hundred maniacs”. This owing to the rape (in the final twist reveal) of the self-same nun in an insane asylum, giving birth to Freddy’s twisted aberration. One might even see Gordon’s preceding state of ignorance as a metaphor for the entire medical profession, as fostered by Rockefeller materialist dogma.

I’m not as impressed, however, by the junkyard reanimation of Freddy’s skeleton, which proceeds to kill the returning John Saxon – as Nancy Thompson’s dad; no longer a detective, he’s now a widower security guard with a drink problem – and attempts to inter Dr Gordon. Just what is the logic here? How exactly does Freddy take “possession of his own skeleton” (per the Wiki synopsis) with regard to Elm Street lore? If anything, it’s less coherent and more of a leap than anything that transpires in the much-derided Freddy’s Revenge (where Freddy is at least possessing someone alive and already animated).

The sequence also, rather damagingly to the movie’s entire premise, removes the agency from the Dream Warriors themselves, since they have been proving entirely ineffectual in terms of putting paid to Kreuger’s alt-world conquests. Thus, it falls to Gordon to effect the crucial blow. There’s a sense here of a flaw Rachel Talalay cited in the original Craven/Wagner envisioning for 3, that Freddy is too powerful and the limits to his abilities are insufficiently defined. We repeatedly see him get knocked down and get back up again in various forms, as “the last of the Elm Street children” evidence that the super-cheesy “In my dreams I can…” scene is just that: cheese immaculate. Perhaps on paper their “heroics” were intended as a false dawn in the way Saxon doing a Patrick Swayze in Ghost is, only to reveal he’s Freddy. Either way, they represent the picture at its daftest, closer to Weird Science than a horror movie.

Nancy: Have you ever done that before? Called someone into your dream?

As has been generally recognised, though, the core idea here is not just solid but very good. Kristen Parker (Patricia Arquette in her movie debut) is able to bridge the gap in the dreams of others, something recognised by the returning Nancy (Heather Langenkamp, unfortunately less than entirely convincing as a more mature grad student). And the setting, post-One Flew Over the Cuckoo’s Nest and pre-The New Mutants and The Ward, with an inevitable whiff of The Breakfast Club, is the perfect one for tension of ethos, as embodied by the blindly hissable Dr Simms (Priscilla Pointer).

Dr Simms: The nightmares are just a symptom of their problems.

She underlines in an almost self-reflexive manner – this is after all the precise mode of analysing horror movies – the unyielding nature of analysis when she denies the patients’ truth: their nightmares are “The by-product of guilt stemming from moral conflicts and overt sexuality”. It’s the perfect recipe for Freddy carnage, as she orders them to be locked in their rooms and sedated. Darabont (who would return to incarceration a number of times in his movies) and Russell (his feature debut as a director) may not ramp up the tension – these movies are notably lacking in tension or effective scares – but the visual palette is leaps and bounds beyond anything their predecessors mustered.

Wagner invoked Bunuel in his envisaging of the material’s surrealistic possibilities, and reviews at the time acknowledged that Dream Warriors was striving for something more: “the feeling is less of down-market pop cinema than of something genuinely experimental” wrote Tim Pulleine in The Film Yearbook 1989. Kim Newman called it a “flamboyant, effects-laden, three-ring circus”, and there’s much here that is genuinely impressive, from the burnt-out opening with Kristen encountering infant Freddy victims (the closest we’ve come thus far to addressing his crimes), prefaced by a Poe quote, to a series of ghoulish and grisly animatronic and puppet effects.

The Giant Freddy head swallowing Kristen may have phallic connotations I missed (although the maquette with lovingly sculpted nude victim tells you exactly what was on the makers’ minds), but it’s an incredibly well realised visual (less when we see the snake form in action). There’s the stop-motion Freddy, who then becomes a puppeteer of his victim via their tendons (again, I wondered on the reality/dream interface here, since Freddy can cut “Come and get him bitch” on someone’s stomach yet the tendons are all in the dream). Also the Videodrome-esque TV interface, complete with the adlibbed “Welcome to primetime, bitch”. Others are slightly less effective: “Let’s get high” with syringes instead of blade fingers. And the Dick Cavett and Zsa Zsa Gabor may be much referenced, but it’s too brief to land.

I wouldn’t consider A Nightmare on Elm Street 3: Dream Warriors the unqualified success its biggest advocates do. It’s let down by faulty internal coherence, and Langenkamp can’t really hold the centre ground. But Arquette is very good (what’s the deal with Kristen’s black wallpaper?), while Larry Fishburne, a few years from being in demand, makes an impression as a kindly orderly. The choice of killing off Nancy is an interesting one, but as noted, it’s diminished somewhat by Gordon being the one who puts an end to Freddy (for now). Angelo Badalamenti’s score isn’t perhaps as interesting as one might expect, given his pedigree. Nevertheless, Dream Warriors is a sign of what the horror sequel can do when it opts against resting on its laurels or pursuing slavish retreads. 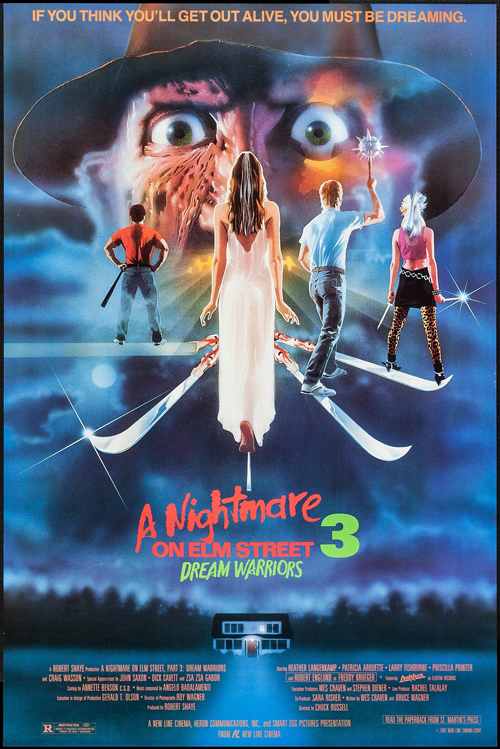 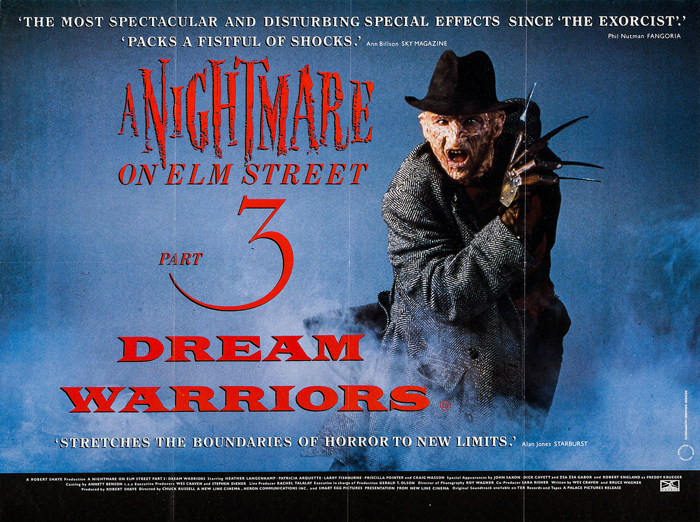