Madam, the chances of bagging an elephant on the Moon are remote.

Ray Harryhausen swaps fantasy for science fiction and stumbles somewhat. The problem with his adaptation of popular eugenicist HG Wells’ 1901 novel isn’t so much that it opts for a quirky storytelling approach over an overtly dramatic one, but that it’s insufficiently dedicated to pursuing that choice. Which means First Men in the Moon, despite a Nigel Kneale screenplay, rather squanders its potential. It does have Lionel Jeffries, though.

It was Kneale’s bright idea to bookend the main 1899 narrative with the UN’s 1964 landing on the Moon (will you just look at the supra-national approach! See how marvellous the UN is!) This stemmed from producer Charles Schneer’s concern that “space exploration had advanced to such a degree that it would be difficult to make the story seem believable to modern audiences” (Ray Harryhausen in An Animated Life). Which is evidently assuming audience credulity with regard to the space race, and all things space, and NASA. Ironically, it’s this antiquated aspect, from a post-steampunk perspective, that is arguably the movie’s strongest suit. Harryhausen had considered modernising the material, per George Pal’s The War of the Worlds, but Kneale’s solution effectively adds a “secrets of the past” quality common to his work.

First Men on the Moon is otherwise fairly nondescript with regard to the writer’s prevailing themes, however, and in form at least – if not tone – it has been cited as one of the more faithful Wells adaptations. Schneer considered there was “not enough variety in it for a feature production” (I tend to agree) while studio Columbia initially expressed reservations that there was “not an audience for it… there is too much space fact on television to allow for space fiction”. Well, yes. Quite. On the subject of which, Harryhausen professed to being most proud of the scientific accuracy of the prologue… Ahem, well it’s feasible NASA and Kubrick were taking notes, I’ll give it that.

These sequences, with a spaceship and mothership, and later/earlier ones with the Cavor space sphere, represent probably the best effects work in the movie, which offers some memorable moonscapes but is rather limited in the trad-Harryhausen creature-shop department. The use of widescreen, while it looks quite nice, was against Ray’s better instincts and created numerous complications, limiting the use of animation to three main sequences (the Selenites’ science, the mooncalf, and the Grand Lunar). And of those, the only real “action” set piece is the mooncalf/giant centipede. The Troglodyte insectoid Selenite design is suggestive of Kneale’s own Martians from Quatermass and the Pit, albeit they’re limited in impact through casting kids in costumes.

Harryhausen observed that the lightening in the movie’s tone resulted from Columbia’s demand for an American director (he promptly made a call to The 7th Voyage of Sinbad’s Nathan Juran): “Many of the ‘laughs’ are from his mind, from actor Lionel Jeffries (Cavor) or a combination of both”. Curiously, as a result, there’s much play on space food, so reflecting the previous year’s outright comedy Mouse on the Moon (chickens especially; Edward Judd’s Bedford is “sick of sardines”). There’s no mention of where they go to the toilet, but since this is set in Victoriana, they probably don’t go at all. Jeffries’ enthusiastic playing of Joseph Cavor – inventor of liquid cavorite, the anti-gravity substance that propels their craft to the Moon – is infectious, energising the proceedings where Juran, in his plodding, functional way, singularly fails.

Another Columbia directive was for a female character, added by Kneale and Jan Read, who was brought in for second draught. She takes the form of irksome stowaway Kate (Martha Hyer), who conspicuously sabotages or foils our heroes’ plans through determined ineptitude. Judd was being fashioned as a leading man at the time, post-The Day the Earth Caught Fire (where he’s pretty good); he can also be seen in Invasion, penned by Robert Holmes. His character Bedford, whose motivation in teaming with Cavor is strictly financial (getting out of debt), is determinedly unsympathetic, be it through berating Cavor or attacking Selenites (“You’ve certainly given them a taste of human violence”). His 1964 old-age makeup is pretty poor too, and rather makes him look like he’s been caked in mud.

Kneale and Read don’t really embrace Wells’ themes, aside from the emphasis on humanity’s propensity for warfare; the Selenites’ progress is based on specialisation absent from mankind’s path, who are “brutes”. Jules Verne objected to Wells’ fantastical invention of Cavorite, but it doesn’t strike me as any more grossly unscientific than accepted doctrine (ie riddled with nonsense and half-truths). Notably, the novel also mentions Tesla (transmissions sent by Cavor from the Moon), someone else who’d fall foul of mainstream narratives. There’s also mention in the movie of unlimited power sources, which is very Tesla: “I’d say it was perpetual motion, if it wasn’t impossible” (power from sunlight). Plus, there’s sound in space.

Harryhausen credited to Kneale the idea that Cavor had a cold, such that his bacteria wipe out the Selenites – “it was a respectful nod at Wells, who had used the bacteria idea in his War of the Worlds” –although it feels a little too close to over-appropriation to me. Ironically, this means Kneale was doubling down on one set of illusory markers of modern society in order to massage the overt fictions of an earlier age. If First Men in the Moon betrays influences, it was also quite possibly influential, in its own low-key way. Flash Gordon’s homemade rocket ship (Zaroff) as envisaged by Mike Hodges? And Doctor Who’s laughably inept insectoid hell, The Web Planet, would be visited only a year later.

It isn’t hugely surprising that First Men in the Moon is rather forgotten, both as a Wells adaptation and in Harryhausen’s oeuvre. It lacks the inspired animations of his best work, and also the adventuring spirit of later attempts to mine Victorian era fiction (At the Earth’s Core). But it’s still an intermittently engaging curio, caught as it is between pillar and post. One might easily imagine Guillermo Del Toro suggesting an authentic, big-budget version, but I agree with Schneer that, to make a successful movie, one would need to go further off text. There have, of course, been more recent takes on the material. Fortunately, I’d been entirely unaware of the Mark Gatiss BBC4 interpretation until writing this review. I intend to resume blissful ignorance directly. 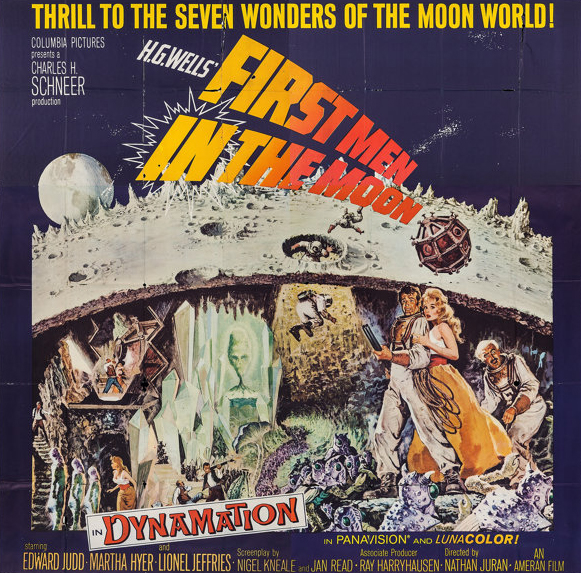