Ladies and gentlemen, this could be a cultural misunderstanding.

Ak. Akk-akk! Tim Burton’s gleefully ghoulish sci-fi was his first real taste of failure. Sure, there was Ed Wood, but that was cheap, critics loved it, and it won Oscars. Mars Attacks! was BIG, though, expected to do boffo business, and like more than a few other idiosyncratic spectaculars of the 1990s (Last Action Hero, Hudson Hawk) it bombed BIG. The effect on Burton was noticeable. He retreated into bankable propositions (the creative and critical nadir perhaps being Planet of the Apes, although I’d rate it higher than the likes of Alice in Wonderland and Dumbo) and put the brakes on his undisciplined goth energy. Something was lost. Mars Attacks! is far from entirely successful, but it finds the director let loose with his own playset and his sensibility intact, apparently given the licence to do what he will.

I was unaware that an adaptation of the Topps trading cards was first suggested by none other than Alex Cox during the mid-80s (an association with producer Jon Davison that also saw the Repo Man director attached to Robocop 2 at one stage). It was put in development with Tristar, where Mike Medavoy nixed Cox’s scripts, commissioning Martin Amis: “TriStar abandoned the project. A decade later it was picked up by Tim Burton, and made into a film. I don’t think either of us got it right. My scripts were too diffuse: too many stories running in parallel… Burton’s Mars Attacks! movie began with a brilliant scene based on card number 22: Burning Cattle. Thereafter, it became a celebrity fest, and suffered from being made at a time when all Hollywood movies had to be filmed in Las Vegas, for reasons unknown”.

That last sentence sounds entirely like one of Cox’s Moviedrome introductions. He’s right, though. For Casino, fine. Legitimate, germane. Mars Attacks! benefits very little from Vegas, and in some respects (characters who add nothing to the proceedings) actively suffers. But while Cox isn’t wrong – it is a celebrity fest – much of the wanton excess of Mars Attacks! works to the picture’s advantage. Burton’s having a huge amount of queasy, twisted fun during the first hour or so. It’s only during the third act (if such rigidity of structure can be applied to this sprawling enterprise) that the proceedings begins to buckle under the weight of elements that are neither funny/sick nor engaging (Vegas, mostly).

In terms of uncontrolled abandon, the movie Mars Attacks! most resembles may be Joe Dante’s Gremlins 2: The New Batch, another Warner Bros production. That picture sustains its satirical swipes much more coherently, arguably, but Burton, with his combination of winking at the audience, cheerfully destructive creatures and the loosest string of connective plot tissue, is working in similar territory to Dante. You’d have thought WB would have learned from allowing idiosyncratic visionaries their head half a decade earlier, but no.

So Burton’s movie, which he saw following the self-conscious, self-referential line of Ed Wood, adopts in broadest terms the disaster-cycle trappings of the ’70s, marrying them to Earth-invasion, B impulses from the ’50s. He was out of step, it seems, for these very forms were simultaneously gestating in newly CGI-spangled straight tellings – or at least, semi-straight – at the same time. Deep Impact and Armageddon would surface two years later – not to mention a couple of duelling volcano pics – and Independence Day had the drop on Mars Attacks! by six months (Rod Steiger suggested WB moved up the release date from 1997, meaning Burton’s vision was compromised; while tweaking might well have resulted in a better movie, I’m doubtful it would have been transformed into one the public also wanted to see). Burton admitted to being struck by the similarities to Roland Emmerich’s picture: “It almost seemed like we had done a kind of Mad magazine version of Independence Day”.

The fun of Mars Attacks! comes from it going actively against the grain of lofty “We come in peace” ideals, Star Trek pseudo-liberalism; in Burton’s movie, the warmongering military is right. The general clash of ethe, of course, echoes Dr. Strangelove (to which Burton’s movie has been compared, usually less than favourably, and certainly so when it comes to Nicholson aping Peter Sellers in multiple roles). Rod Steiger’s General Decker is an undiluted champion of aggression (“We should nuke them now, sir” – evidently under the illusion such a thing would be possible). And every incident of the hilariously revolting – “We probably look equally gross to them” – Martians meeting world leaders results in a spray of colourful laser carnage (Burton allegedly claimed the skeletons were based on the red and green of Christmas).

Pleas of “Don’t run, we are your friends” are especially chucklesome in this regard. The idea of well-meaning Martians is the stuff of intellectuals (Pierce Brosnan’s Professor Donald Kessler, advisor to the President), flakes (Annette Bening’s New Age alcoholic Barbara Land: “And I’m feeling so optimistic because of the Martians…”) and… the French. Much of the first part of the picture revolves around Nicholson’s President Dale attempting to broker an engagement strategy, with conflicting views offered by Decker and Kessler. Martin Short as Dale’s Press Secretary Jerry Ross, an oozing smarmster and frequenter of floozies – including the Martian kind in the form of then-Burton-belle Lisa Marie, leading to a grisly severed finger – is content to sit in the middle.

Nicholson’s on fine form as the President (Warren Beatty, then Paul Newman passed first), it has to be said; the problems with his presence in the picture lie elsewhere. Dale is by turns insincere and consummately presidential (much the same thing for Nicholson). His blistering confrontation with Decker is classic material, and for all that it’s played as a comedy, carries far more punch – Jack and Steiger are real heavyweights – than his celebrated turn in A Few Good Men. And his last-ditch attempt to reason – or smooth – the Martians is wonderful (“Why can’t we just get along?”) eliciting a tear before he’s killed with a robot hand.

Glenn Close also deserves singling out for a stellar performance as the first lady, caught in a state of permanent disbelieving hysteria/revulsion/gagging at the aliens and their acts (it might be my favourite Close role). Part of the fun here is that none of these stars are safe, and you can hear Burton hooting with laughter as they variously meet untimely ends.

There are some gems too in the entourage revolving around the White House. I’m no great fan of Sarah Jessica Parker, having entirely failed to understand her career appeal, but she is strangely perfect as a vacuous talk show host whose head is grafted onto the body of her pet Chihuahua – complete with frantically wagging tail – before she and a similarly headless Kessler declare undying lust for each other (in spite of the logistical obstacles, they even manage to steal a kiss before succumbing to the destruction of the Martian saucer). Brosnan is absolutely a class act as Kessler – the role was originally earmarked for Hugh Grant – betraying unquestionable self-confidence and charm (well, of course, he’s Pierce Brosnan) and showing an absolute understanding of the necessary tone.

Also appearing in this section are Michael J Fox as the jealous – of Parker and Brosnan – serious newshound (Depp turned the part down, and wisely, as Fox makes far more of it than he could have; Depp would have been simply vanilla as Jason Stone). Paul Winfield is early victim General Casey, who got where he is by never speaking up, just staying the path, and assuring himself that “good things are bound to happen” (is his demise a reference to Star Trek II: The Wrath of Khan?) Natalie Portman is the President’s daughter, in probably her most innocuous of some dubious flirtations with older guys during this period (Lukas Haas is a mere five years her senior; see also Leon and Beautiful Girls for less innocent suggestiveness).

The Haas plotline, whereby his Richie Norris must deal with the redneck influences of parents Joe Don Baker and O-Lan Jones, while brother Jack Black goes off to fight (and dies on TV, much to his parents’ horror), is only so-so. Following her Beetlejuice performance, it’s nice to see Sylvia Sidney again – a rare beauty in the 1930s – as Haas’ dotty grandma. She provides the inadvertent solution to the Martian menace due to the destructive effects of her Slim Whitman records. You can see how intentionally dopey this plotline is by Haas’ Medal of Honour speech (suggesting they all live in tepees instead of houses), but the most impressive part of this is Christina Applegate’s astonishingly sheer leggings.

Much of the rest is Vegas related, and the results are patchy at best. Pam Grier’s ’90s “renaissance” began with Escape from L.A. earlier the same year (what’s that? Bill and Ted’s Bogus Journey?), but she makes scant impression in a dull role. Jim Brown fares a little better as her former world champ-boxer hubby, mainly because of his airfield smackdown of a mass of Martians towards the end (very They Live!) Tom Jones is also, winningly, himself. Less winningly, he introduces himself to Brown with “Hey, I saw you fight in Cardiff, Wales once”. I have to credit Burton for featuring a double-taking songbird in Jones’ final performance, though. We haven’t seen the like in a blockbuster since Moonraker, less is the pity.

Decidedly redundant are Bening and Danny DeVito. The latter’s miniscule role – in terms of screen time – is explained by his replacing the unavailable Glenn Shadix (who would probably have made it work). The real black hole here, however, which may explain how deflated the Vegas section is as a whole, or it may just be a crappy character – is Nicholson in his secondary role of wheeler-dealer Art Land. He has a fake nose and a cowboy hat, and he’s entirely unfunny. I was struck however, that in terms of manner and voice he’s very similar to Beetlejuice. It thus makes sense that Burton was looking to cast Keaton until Jack requested dual roles. More, I could see Keaton making it work, bring a wired energy that isn’t late-period Nicholson.

Mars Attacks! feels like a Tim Burton movie through and through, warts and all, which is hugely in its favour. He originally planned to render the Martians via stop motion. Burton’s stop-motion intent in was to make the effects “look cheap and purposely fake looking as possible”. Costs proved prohibitive, so ILM were drafted in. Ironically, since their visuals are outstanding. Anyone who thinks CGI has come on in 25 years should look at this (it should have been Oscar nominated; which stands the test of time better, this or Dragonheart?)

The opening stampede of flaming cows sets the tone perfectly, along with a suitably wacky Danny Elfman score and OTT title sequence (all those saucers). Peter Suschitzky’s cinematography highlights the pop-art colour scheme, while the Martian movements were based on Gloria Swanson (very swishy). Obviously, many of the gags don’t land, but the sicker they are the better chance they have. Occasionally, there’s a strikingly odd moment amongst the general melange of oddness: “Do the Martians have two sexes, like we do?” asks an indeterminately gendered reporter (transphobic or predictive or both?) Mars Attacks! is very undisciplined and occasionally a little hopeless, but as an example of a creative director unfettered, it’s a Burton to be savoured. 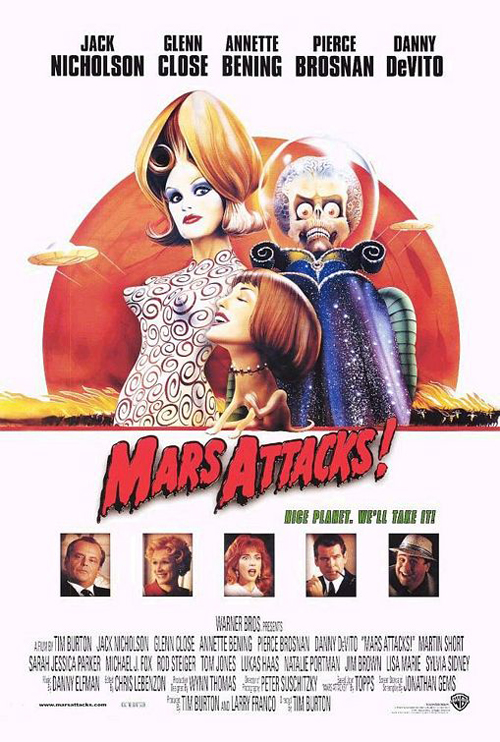 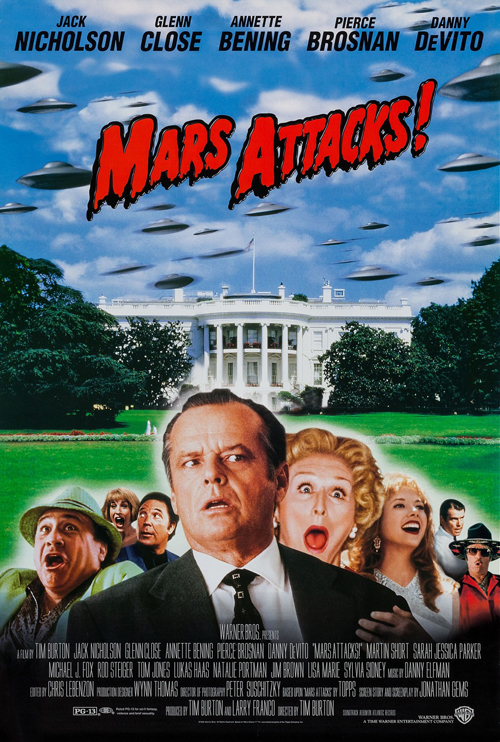