I’ve crossed the Atlantic to be reasonable.

Prestige Samuel Goldwyn production – signifiers being attaching a reputable director, often William Wyler, to then-popular plays or classical literature, see also Dead End, Wuthering Heights, The Little Foxes, The Best Years of Our Lives, and earning a Best Picture nomination as a matter of course – that manages to be both engrossing and irritating. Which is to say that, in terms of characterisation, Dodsworth rather shows its years, expecting a level of engagement in the relationship between Sam Dodsworth (Walter Huston) and his wayward, fun-loving wife Fran (Ruth Chatterton) at odds with their unsympathetic behaviour.

Fran: I’m fighting for my life! You can’t drag me back!

There’s only so much of Sam being a walkover as his younger wife (but not that much younger), desperate to retain the illusion of youthful freedom, carries on with other men, one can take. So, even though he’s the injured party in this, he’s so much of a doormat that he loses our vote. Huston’s nevertheless very reliable, and likeable, as the retiree from his firm Dodsworth Motors. He discovers life outside the business world to be rather vexing during a European trip, as Fran engages in extended flirtations with younger men, first caddish Captain Lockert (David Niven) and then aristocratic Arnold Iselin (Paul Lukas).

Tubby: Would you lay off those European liberties with my wife?

Sidney Howard, who adapted his 1934 play, itself an adaptation of Sinclair Lewis’ 1929 novel, would go on to pen the likes of Raffles and Gone with the Wind, and Pauline Kael suggested the picture’s only problem was sticking too closely to the stage version (“It looks programmed and underpopulated, though in an elegantly stylised way”). It’s true that Dodsworth is very interior, and at times claustrophobic in sticking like glue to its main characters. But the issue is more one identified by Wyler, one he clashed with lead Chatterton over; Fran is an incredibly unsympathetic character (a “foolish horror”), whose utterly shallow obsession with her youth and retaining it for as long as possible (“You’ve got to let me have my fling now!“) offers no chance of finding anything redeemable or relatable.

Perhaps, were Chatterton comely (Fran refers to herself as “a wife who isn’t exactly plain”, but she has a face like a soup spoon), we might at least understand the attentions Mrs Dodsworth is getting from younger suitors, and her vain attempt to keep a hold of her most precious asset. Instead she just seems delusional, and the men keen on her idiots.

Sam: I’ve got nothing to do but look at ruined temples. They’ll keep. They’ve kept this long.

This in turn influences our view of Sam (a “true dreamer”). At first, his tolerance of his wife seems to be down to understanding the limits of the situation (“I suppose it’s up to me to go out and shoot him” he says drolly of Lockert’s indiscreet behaviour). There’s even a point when it looks as if he’s going to lay down the law (“I think I’ve been weak with you quite long enough”) before summarily wilting and retreating to New York. Only to then go and fetch her and be further rebuked.

At this point, other factors come into play, illustrating the grotesque extent of Fran’s disregard for anything but herself. Their daughter is pregnant, but Mrs Dodsworth elects to avoid returning home to see the baby, because it will be a stark reminder that she is now a grandma. Almost as damning is that Sam, very keen to see the wee tot, doesn’t go home anyway but instead decides to loaf around Europe; who’d want to be this pair’s offspring, given their response when you most need them to be there for you?

Fran: I hope I look as young as you do, when I’m your age.
Edith: You’re almost sure to, my dear.

This drag fortunately takes a turn when Sam falls in with the really rather nice Edith (Mary Astor, going through a highly scandalous, high profile divorce herself at the time), while Fran gets her comeuppance, told to sling her hook by Arnold’s overbearing mumsie (Maria Ouspenskaya, of The Wolf Man fame). Inevitably, this leads to an eleventh-hour call for Sam to return to his floozy wife, only for him to then see sense. So Dodsworth at least ends with a sliver of satisfaction, but there’s an awful lot of time spent en route with characters who are either entirely dislikeable or so lacking in judgement they may as well be.

Fran: All our friends think of me as young, and I am, I am.

One aspect that hasn’t aged, because it was evidently a pain on the eardrums at the time – if Graham Greene’s contemporary review is anything to go by – is the “almost incessant” music. It’s the equivalent of aural diarrhoea, sprayed indiscriminately across the soundtrack with wanton disregard for mood or, you know, actually enhancing a scene.

Fran: What’s going to become of me?
Sam: I don’t know. You’ll have to stop getting younger someday.

Dodsworth was nominated for seven Oscars, including Picture, Director, Actor (Huston), Supporting Actress (Ouspenskaya) and Screenplay. It won one, Art Direction for Richard Day. Few of the ten nominees carry much weight today, Mr. Deeds Goes to Town aside, and you’d likely not figure, coming to it cold, that Dodsworth had received such plaudits. Like its title character, the movie’s a bit of an old duffer, lacking self-awareness, youth and verve. 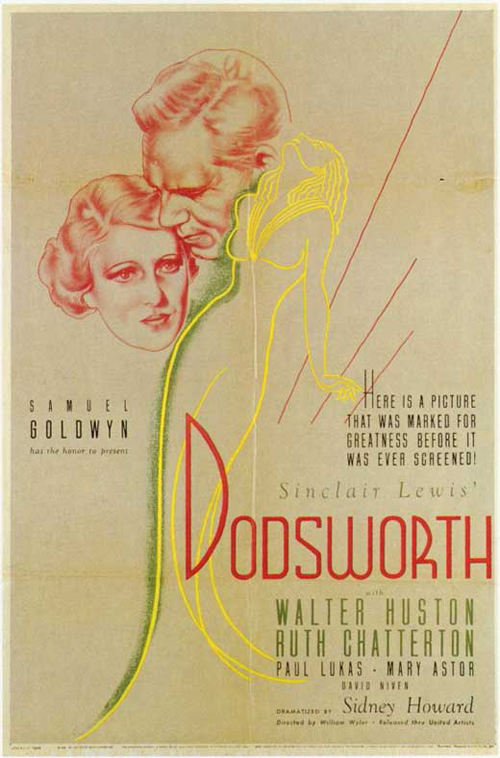