What are you doing, watching life in the slums?

In case you doubted it, there was never a monopoly on Denzel making all the painfully stagey movie adaptations of plays. Less still their getting rafts of Oscar nominations. It’s impossible to watch a certain kind of movie – or play, at any rate – without the Coen Brothers’ classic Barton Fink coming to mind, and its title character waxing “lyrical” about a tenement building on the Lower East Side, and the smell of fish, amid copious earnest moralising and an overwhelming air of self-importance. Which is Dead End all over. Like Barton Fink’s fish, it stinks.

Drina: I know that house in the country so well, I can almost build it.

William Wyler was entering a peak period of success at this point; he’d been nominated the previous year for Dodsworth, and would garner another seven nominations and two wins before his third and final statuette came winging his way at the end of the 1950s (for Ben-Hur). Quite a run, and quite a versatile array of genres and subject matter, such was the studio system.

Dead End came at the behest of Samuel Goldwyn, who snapped up the rights to Sidney Kingsley’s 1935 Broadway hit play for a crazy $165k (about $3m in today’s dosh). His intention was to translate the sometimes-unsuitable subject matter – to the Hayes Code – largely uncut. So while Francey (Claire Trevor, Best Supporting Actress nominated) is clearly sickly, her syphilis goes unmentioned. About the strongest allusion to her less-than-reputable lifestyle comes when the henchman of Baby Face Martin (Bogey), sent to call on her, reports that she isn’t up yet, and then adds pointedly “She seemed kind of busy, your Francey”. Obviously, Baby Face – who has returned to the neighbourhood through nostalgia or some such – is less interested in his former squeeze when he learns she’s sullied goods.

Goldwyn lavished a lavish set on the production (cinematographer Gregg Toland and Art Director Richard Day were also Oscar nominated; the former would go on to win for Wyler’s Wuthering Heights, the latter had already taken home two trophies, and would win another six, with twelve other noms besides!) Wyler wanted to shoot authentically on location, perhaps not such a grand idea when it came to swimming in the East River (unless you’re Cosmo Kramer). However, you can see his point. No matter how much it’s dirtied up with the occasional cockroach, the set is resolutely closed and confined, beginning and ending on the artifice of a pan to and from the cityscape. Which means most of the interactions and transitions between characters retain the overt staginess of the play; no matter how many sequences are effectively (noirishly) lit, the end results creak as much as the performances.

The introductory titles signpost the theme, of rich and poor, and how the former are lately encroaching on the East River because of its prettifying views, such that “now terraces look down into the windows of the tenement poor”. This divide is exactly as crudely fashioned as that sounds, with unruly street kidz hanging around a fortress-like doorway guarded by Ward Bond. The stately premises are inhabited by posh totty Kay (Wendy Barrie), and also unlucky rich kid Philip (Charles Peck), who gets a jolly good beating from the urchinz.

These kidz, popularly The Dead End Kids, had mostly appeared in Dead End’s Broadway incarnation and were contracted to United Artists, only to be released to Warner Bros (they also appeared in Angels with Dirty Faces amongst others) after they ran riot on the lot. They’re a wretchedly amateurish bunch, given to cries of “I’ll marbleise ya, you goon!” and poised somewhere between Happy Days and Once Upon a Time in America. In particular, the plight of Tommy (Billy Halop), doted over by big sister Drina (what kind of name is Drina? The kind given to a river in the Balkans, it seems). Drina is played by the lovely Sylvia Sidney, who was great in the previous year’s Sabotage. Unfortunately, here she’s saddled with a quite awful wet blanket and doormat character, whose inability to see Tommy’s recalcitrance is especially wearing.

Indeed, it’s surely a bit of an own goal that rich fellow Mr Griswald (Minor Watson) should seem eminently reasonable in wanting Tommy to face justice for knifing him and robbing and mugging Philip. It doesn’t help either that Drina’s protestations that her brother just made a mistake are terribly unpersuasive (“I’m sure he didn’t mean to”), while Griswald’s retorts are pretty good (“Yes, a mistake half-an-inch deep and painful”).

Dave: He was smart, and brave, and decent… at first.

Elsewhere, we have Joel McCrea’s poverty-trap architect Dave, a very McCrea bastion of rugged goodness and so faintly dull. His head’s been turned by upper-crust Kay, but you know he’ll end up with Drina and be the surrogate dad Tommy so desperately needs. Dave’s been set against Baby Face, objecting to his guns and knives approach and proving more than a match for him when it comes to a set-to. The latter is the movie’s biggest concession to, well, the movies, since the point from Dave dropping into the East River to shooting Bogey on a rooftop is about the only interval where Dead Endfeels genuinely cinematic. That and Kay blanching at the sickly coughing, the filthy roaches in the garbage and the crying babies when she steals her way to Dave’s derelict door.

McCrea apparently kept flinching in his scenes with Bogey, not because the latter was intimidating, but because Humphrey was on the spitty side. Yeuch. Bogey was there largely because they couldn’t get George Raft or Jimmy Cagney, and it would be another four years before he really broke through as a leading man.

Hunk: We all make mistakes, boss. That’s why they put rubbers on the ends of pencils.

As noted, Dead End received a Best Picture nomination and three other nods in a year featuring ten nominees for the top slot (The Life of Emile Zola won, but The Awful Truth is probably the keeper). I have little compunction in writing this one off, and I doubt even a sympathetic adaptation, geared to actual realism, would have helped. It’s the kind of faintly patronising fare written by the middle classes about the working classes, the kind of thing Mike Leigh would later thrive off, which only further diminishes any pretensions towards drama heft or lingering resonance. Pauline Kael called this “ambience of Broadway social conscience of the 30s” “highly entertaining”, but it really isn’t. Still, Bogey’s mum’s response on seeing him is quite sobering: “Then get out of here, before I cut your face again”. It certainly explains why he got that “plastic”. 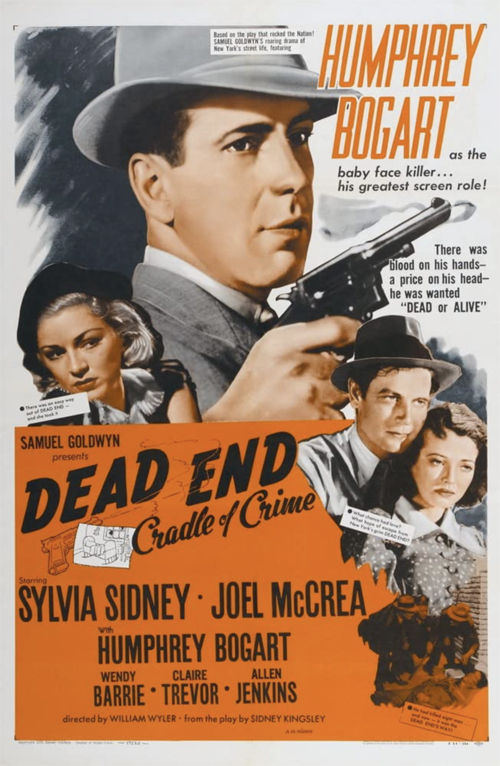