Tea without milk is so uncivilised.

Anyone minded to suggest Hollywood blockbuster filmmaking took hold in the 1980s needs to take a good hard look at The Great Escape, with its prototypical starry cast, engineered set pieces and bloated running time. It’s a dazzling entertainment machine, from Elmer Bernstein’s signature theme on in. If it’s far from a masterpiece, John Sturges movie stands the test of time for a very good reason; WWII as a boys’-own (exclusively boys’ own) fantasy romp. Even the few (quite a few, offscreen) deaths can’t get in the way of its indomitable, rousing, can-do joie de vivre.

Sturges set the scene for this kind of ensemble with The Magnificent Seven three years earlier (not such a success in the US on original release, however), but it had taken him eight years to get a studio to bite on the material, Paul Brickhill’s 1950 book. Brickhill was a former POW whose The Dambusters and Reach for the Sky were previously adapted in 1954 and 1956 respectively. He was a digger in the tunnel depicted in the movie (“Tom”), and the Charles Bronson claustrophobia subplot was a personal one. The adaptation came courtesy of James Clavell and WR Burnett (and an uncredited Walter Newman, who took his name off the picture over disagreements with Sturges about how things turned out).

The Great Escape is something of a self-conscious epic; it boasts a substantial three-hour running time, all of it built on the call to action. There’s little appetite for reflection or deliberation on the ethics of war and the realities thereof. We see Angus Lennie’s flying officer Ives breaking after his escape hopes are dashed, shot as he attempts to get over the fence. And there’s Bronson’s Polish tunneller, overcome with anxiety about the confined spaces after one too many cave-ins.

There’s also an attempt to delineate the SS from the Luftwaffe in charge of the camp; the Kommandant (Hanes Messemer) is a decided moderate, lax about Heiling Hitler in response to his Gestapo fellows and duly relieved of his command at the end; Squadron Leader Barlett (“Big X”, Sir Dickie) vows to “cause a terrible stink in his Third Reich of theirs” and is unimpressed at the distinctions made by the SBO (James Donald) between the Nazis and their captors (“We’re fighting the bloody lot”). Likewise, we’re made to feel sympathy for guard Werner (Robert Graf), even if he does discover the tunnel.

The more deliberate pose is the stiff upper lip of the likes of Bartlett and, in his own uncomplicated way, Steve McQueen’s Cooler King. Too much interrogation of the subject matter would entirely defeat the purpose of the picture, which is, by its nature, functional, planned, calculated and effective. The last hour is all about the escape, the first all about the introductions and planning. If it loses a little momentum in between, well, it’s only a little.

Sturges masterstroke is assembling the cast. The Magnificent Seven transitioned McQueen from TV to movie star, and it was also instrumental in establishing or repositioning Charles Bronson, Robert Vaughn and James Coburn too (following suit, Escape would be James Garner’s first movie after Maverick’s TV success). The Great Escape would make McQueen an icon, an actor so cool he seemed oblivious to the trappings of the period he was supposed to be in, and it didn’t really matter (is Hilts even wearing a costume, or just something McQueen decided on that morning?) The movie is unapologetically built on American stars McQueen and Garner (who apparently became friends during the picture, bonding over a shared love of vroom vrooms).

Perhaps because I was more familiar with him when I first saw it (The Rockford Files), I always preferred Garner’s scrounger character to McQueen’s cool Cooler King. Both have their little British pal to humanise them (McQueen has Lennie, joining him in escape bids until the latter is pushed to the edge), but the relationship between Hendley and Blythe the forger (Donald Pleasance) is easily the most affecting aspect of the picture; the former takes responsibility for aiding the escape of the latter, who is going blind. Both have the most fantastical of escape bids – Hilts on a bike, Hendley in a plane – even if Hilts’ is the one that goes down in the movie history books.

Unlike some star-heavy vehicles, this blend works seamlessly. On screen at least. Sir Dickie apparently found McQueen very difficult, and the latter caused trouble with his demands for more screen time (the push-pull of aloofness and lack-of-involvement in respect of the character exposing his insecurities). But McQueen requested the motorcycle sequence, and it’s a genius inclusion, both in concept and execution. What’s interesting is realising these are TV guys – McQueen, Bronson, Garner – effectively filling the big screen. Garner would never really take (hence a return to TV) while McQueen and Bronson would still have to wait a few more years before they found their niches. In some respects, outlier Coburn would have a more prolific decade, hipper to the prevailing vibe, man.

It has to be admitted though – and I’m a huge Coburn fan – that Flying Officer Sedgwick is an atrocity, an unspeakable crime to mangled accents murdered in the name of the performing arts. He’s supposed to be an Australian, but his vandalised verbiage makes Dick van Dyke in Mary Poppins sound as if he was genuinely born within the sound of bow bells. Coburn’s escapee was based on a Netherlander, and it’s probably as easy to imagine his accent as Dutch as it is Australian. As it is, though, he gets probably the actual coolest escape attempt, casually thieving a bicycle and making himself much less conspicuous and low-key than his co-star utilising a motorised model.

It’s amazing too how likeable Bronson is here; I’m as much not a fan of Bronson as I am one of Coburn, but Tunnel King Welinski couldn’t be more antithetical to his later gimlet-eyed, cash-grab, gun-wielding vigilantes for Cannon. Also of note: pre-The Man from U.N.C.L.E. David McCallum; pre-The Ipcress File Gordon Jackson; pre-Watson and Number Six Nigel Stock (being a rotund old duffer, it’s Cavendish who manages to stumble and alert the guards); pre-Doctor Who companion William Russell (but only just). Sir Dickie might just be the standout, though, in a role earmarked for Richard Harris (who was waylaid on This Sporting Life). The young Sir Dickie roles were now exiting fast (I’m All Right Jack might count as the last of them) and in came his more patrician ones, still often with a military bias. He’s the driving force behind the escape, instilling the urgency and fuelling the fervour.

Brandishing the “legitimate fiction” cards of “composites” and “compression”, the opening titles informs us “every detail of the escape is the way it really happened”. No one seriously believes it’s other than a fantasy, though and “largely fictional” (Wiki). There was willing help from Germans in the escape (including several guards), for example, making some of the more inexplicable incidents (the wallet theft is straight out of Hogan’s Heroes), much more explicable.

The Great Escape was released on July 4, and would sneak in at Number 10 for the US year (it has outshone most of the others in the ranking since, one that includes such truly bloated affairs as Cleopatra, How the West was Won and It’s a Mad, Mad, Mad, Mad World). In a way, this type of Hollywood war fare – along with the likes of Where Eagles Dare – is more honest than the celebrated Oscar fuel Spielberg has since delivered. Because it’s offering no real pretence about its artifice, or presumption of importance and pomp. It’s pretty much irresistible. 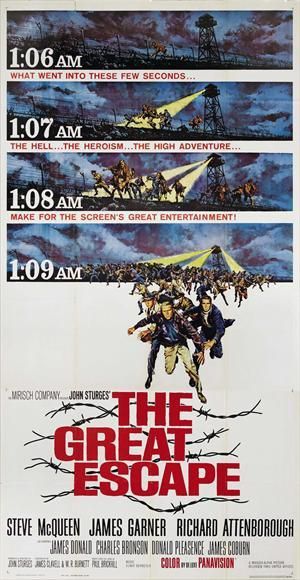