George Lucas’ massively influential and hugely successful nostalgia-fest, set in an America just far enough away and not really so long ago at all but increasingly heading that way with every passing year. I’ve never really cared too much for American Graffiti, even as I can appreciate Lucas’ instinctive ability to tap a rich seam (generational yearning for yesteryear, million-dollar soundtrack of bygone hits, new/old through combining then-current filmmaking acumen and social attitudes with classical tropes). Many of the similarly themed – nostalgic or otherwise – period pieces or navel gazing it spawned were superior: The Wanderers; Diner; The Big Chill. And then, of course, there’s its direct responsibility for Happy Days. And worse, the maturation of little Ronnie Howard, now a directing “legend”.

American Graffiti’s a case, however, where I cannot really take issue with the Academy’s predilection (well, it was a predilection) for recognising at least a smattering of big earners in its annual back-slapping fest. If the year’s Best Picture Oscar winner The Sting was more representative of the kind of thinking that saw The Towering Inferno nominated the following year (a little classier, but let’s not kid ourselves), American Graffiti and The Exorcist were both innovative and original works that entirely justified their presence. Graffitireceived five nominations (Picture, Director, Candy Clark as Supporting Actress, Original Screenplay and significantly Film Editing). It won none.

Set in 1962 – in my head, it’s the 1950s, probably because of Happy Days – on the eve of several characters leaving for college, Lucas offers a series of rites of passage: buying beer; joining a gang; racing cars; splitting with the girlfriend; getting a girlfriend; getting into a fight; getting into trouble with the cops. All oft-drawn on touchstones, and Lucas’ main characters represent the four stages of George (although, I find it difficult to imagine Lucas as a street racer; that however, is part of the sepia-tinted wave he is surfing). Lucas particular trick was to apply a vérité feel, rather than that of the more expected exploitation flick.

Famously, no one much believed in his vision, except for Uncle Francis. There were music licensing worries, (Tarantino’s soundtrack to Once Upon a Time in Hollywood is clearly influenced by American Graffiti) and the diegetic use of music would be significant generally in cinema, emphasising realism even where (as here) it was riding on the fumes of nostalgic fantasy. United Artists passed on the picture, and then every studio but Universal followed suit. Universal was going to throw it out on TV until Coppola scored with The Godfather, and the studio slowly started to listen up as employees boosted its rep (as Terry Gilliam later discovered, no easy thing to achieve with Sid Sheinberg involved).

If most critics swooned before the movie, Pauline Kael was a notable exception. You’ll be aware by now that I quote Kael’s (often contemporary) reviews a lot, not only because they’re a great read, whatever side of the fence she sits in relation to one’s own view, but because she invariably had a distinctive take. She recognised the filmmaking skill involved with American Graffiti, yet objected to what she perceived as a mechanical quality.

More particularly, she took issue with its positioning via “white middle class boys whose memories have turned into pop”. If that sounds like an almost contemporary, woke take on Lucas’ blinkeredness, Kael was at pains to stress that, while it may have been implicit, she wasn’t making a “feminist issue of it” (as De Palma’s later greatest advocate, she could hardly do that, although she frequently did try to have her cake and eat it). The kernel of her objections come in the “epitaphs” that end the picture, bringing us up to date by informing us where the characters are now. There’s no room for the females in this, perhaps inevitably since they represent “plot functions”.

It goes without saying, retrospectively, that Lucas has no interest in or facility for his female characters (albeit, he shares screenwriting duties with Willard Huyck and Gloria Katz, later of Indiana Jones and the Temple of Doom and the magnificent Howard the Duck). And certainly, in Oscar-nominated Candy Clark’s case, Debbie’s little more than a cypher, a bubble-gum blonde simply there to facilitate something remarkable happening to delta-male Terry (Charles Martin-Smith) that night. In which regard, her presence is mystifying, except maybe as some nerd-George fantasy wish fulfilment (this might be Lucas’ “Why do we have to kill people?” instinct at work; he’ll even retcon Terry surviving Nam in the unloved, forgotten sequel).

Kael’s point is difficult to argue when it comes to Cindy William’s Laurie, however; she’s a bona fide character with agency, whom we follow even when she isn’t with boyfriend Steve (Howard). And John’s (Paul Le Mat) evening is entirely about his “odd couple” bonding with twelve-year-old Carol (Mackenzie Phillips). As Kael suggests, she’s the most entertaining character in the movie.

One might reasonably contest that Kael is drawing attention to the bleedin’ obvious. How could she possibly have expected the wunderkind film nerds to show a facility for and insight into the female psyche, less still treat them as possessing equal individuality to the men? Besides which, Lucas is unapologetically focussing on exactly what she’s accusing him of: shallow, adolescent obsessiveness with girls and cars and booze, captured through a nostalgic fugue.

Some of her comments are interesting with hindsight: “The images aren’t as visually striking as they would be if only there were a mind at work behind them” and there is “nothing to back up the style”. I don’t think that’s the case. I think it’s simply – as is the problem with the era Lucas and Spielberg ushered in – that the mind at work is only really concerned with the surface detail; shallow mythos is exactly why Star Wars hit a nerve. That’s not necessarily a problem (well, the prequel trilogy…) Rather, it’s indicative of where Lucas’ mind is focussed.

But I’m fully on board with Kael in being unimpressed by the broader impulse of the picture, its “pop narcissism” and how “it invites audiences to share in a fond, jokey view of its own adolescence” and be “ecstatically happy condescending towards its own past”. Your mileage is going to vary according to how inclined you are to nostalgia anyway, and how disposed you are to characterising your life in such archetypal terms (something Lucas had a knack for): “the giggle you get from looking at a false image of yourself” through his “fake folk art”.

Where I part ways with Kael is that I think, as Star Wars proved in triplicate, there’s a very significant skill set and attunement that enables one to elicit such a response. It isn’t just about shallow self-regard. Admittedly, that doesn’t help, if you’re unimpressed with George’s assembly of stock types or the various rites of passage he has in store. What Kael objected to was something she, and every moviegoer, is victim to, to some extent: the audience-identification aspect (she references both Rebel Without a Cause and Easy Rider). In a broader genre, that can simply elicit an emotional response, but I’m not sure this is necessarily any more inducive of conditioned, sheep-like behaviour (drawing on the screen images as a template for the recall of one’s own life).

Richard Dreyfuss gives the most appealing performance of the quartet, particularly in Curt’s nervy/ laidback response to being drafted for a ride around with gang the Pharaohs; Lucas was apparently unable to budget the planned opening reveal that Curt’s dream girl (Suzanne Somers) is in fact a dream, but that’s probably no bad thing.

It’s interesting that Bob Balaban turned Terry (Charles Martin Smith) down, as the geek/whizz guy he played in Close Encounters of the Third Kind could easily have been Smith (just as Smith’s character in Starman could easily have been played by Balaban). There’s nothing to distinguish Terry from later versions of his type; Smith performs the character with honours, but there’s no interior. Even as his “I’ll die soon and it’ll all be over” (heaving then getting pummelled) produces a chuckle. Even the self-help group gimmick of The Breakfast Club gave us more compelling renditions of the reject and loser. The only surprise with Howard “the all-American-soda-jerk hero of the forties” is that he’s a relatively comfortable successful kid rather than one straight-laced naïf.

The John (Paul Le Mat) and Carol (Mackenzie Phillips) plotline is noteworthy. Presented quite sweetly, it becomes less so when you acknowledge the later Raiders of the Lost Ark and how Lucas was boosting the underage relationship between Indy and Marion (left at the screen version’s indeterminate “I was just a child”; “You knew what you were doing”). Or remind yourself that Phillips announced an entirely disturbed familial relationship (producer Gary Kurtz had to become her temporary guardian on set as she arrived alone for filming).

Kael’s quite correct that the “what happened next” offers a very short-sighted perspective, one reflecting Lucas’ youth: “as if lives were set ten years after high school!” Animal House would riff on many of the elements American Graffiti popularised, including mocking the epitaphs. Perhaps that goes some way to explaining the failure of More American Graffiti, released in 1979 and bombing miserably. It wasn’t for want of the cast coming back. Only Dreyfuss (wisely) said no, with even Harrison Ford (at that point agreeing to anything and everything in the wake of Han Solo’s first flush) came back as Stetson-wearing Bob Falfa. Bill L Norton was the director, which probably didn’t help (he later made the extraordinary Baby: Secret of the Lost Legend).

The same year saw the forlorn Butch and Sundance: The Early Years, while Exorcist II: The Heretic killed thatfranchise for another decade two years before. The prized and profitable sequel would only truly become a thing the following year, when Lucas first ongoing cash cow was released. And, with a woke Willow (TV) sequel coming down the pipe, how long before we get THX1139? What’s that? We’re living in it? 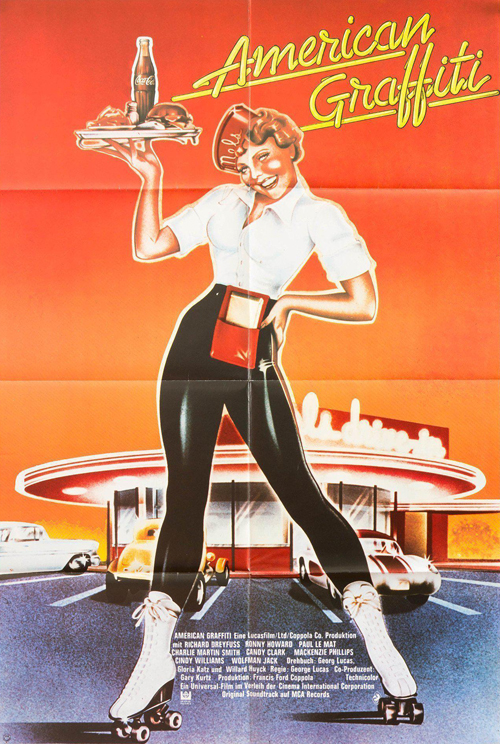 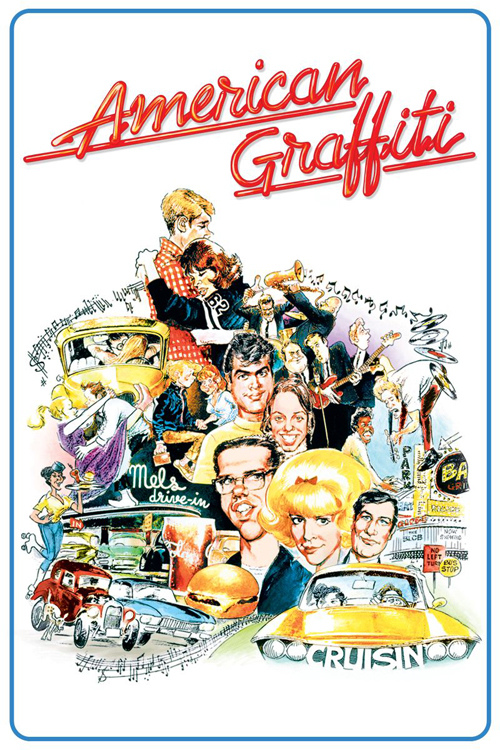