I must remind you that the scanning experience is usually a painful one.

David Cronenberg has made a career – albeit, he may have “matured” a little over the past few decades, so it is now somewhat less foregrounded – from sticking up for the less edifying notions of evolution and modern scientific thought. The idea that regress is, in fact, a form of progress, and unpropitious developments are less dead ends than a means to a state or states as yet unappreciated. He began this path with some squeam-worthy body horrors, before genre hopping to more explicit science fiction with Scanners, and with it, greater critical acclaim and a wider audience. And it remains a good movie, even as it suffers from an unprepossessing lead and rather fumbles the last furlong, cutting to the chase when a more measured, considered approach would have paid dividends.

Rather than diseases that “destroy a well-functioning machine” (an atheist-materialist perspective at its core level), they may change that system into something else; instead of a defective machine, it becomes one that “just has a different purpose”. Cronenberg seems genuinely convinced of this, and is fond of extolling the “empathic” position: “I can imagine what it feels like to be a virus” (I guess Cronenberg as a virus is preferable to Prince Philip, at least). Of course, to validate this concept, he must embrace the fallacy that it is “a living creature”: “See the movies from the point of view of the disease. You can see why they would resist attempts to destroy them”. You can observe this (if you must) as a through line from Shivers to The Fly, in particular. But in tandem, gaining in strength, is Cronenberg’s interest in not just the disease, but also the technology behind it. By the time The Fly comes along, the physical mutation of his ’70s movies is specifically attenuated to scientific progress, however in error.

In Scanners, the disease is a man made, and its end is at least in part a transhumanist one, whereby “a new world will emerge” from the conflict between sides, as Kim Newman notes in Nightmare Movies. In its tritest sense, we find this in Michael Ironside’s Revok and his desire to take over, to become the new dominant species (through the mass distribution of ephemerol). His only difference from Dr Ruth (Patrick McGoohan) is that of method; Ruth was, after all, willing to experiment on his pregnant wife, who gave birth to Revok and Stephen Lack’s Cameron Vale. Even come Blade Runner 2049, such ideas of uprising and revolution seem rather clumsy as plot devices, such that the stealth encroachment of the new flesh (Videodrome) carries more weight and resonance.

But if Revok’s plan – and the spying of Lawrence Dane’s Consec Head of Security Keller – is a little on the rote side, and Cronenberg, for all his lo-fi science-fiction sheen, aided by then regular cinematographer Mark Irwin, delivers chamber-piece visions of epochal events, many of the ideas are acute. We’ve seen De Palma explore the surveillance services putting the psychically gifted to use in The Fury by this point, and the talk of corporate interests supplying espionage and private armies conjures visions of much-vaunted super soldiers, be they psychic (Montauk) or augmented (black goo).

Rather than a host of gruey deformities – give or take the odd exploding head and popping veins – Cronenberg has a more contained evolution in mind in Scanners, such that the end note is, as Newman notes, his version of a happy ending. Even one that involves inhabiting a villain’s body (it might have been more effective had Ironside given a genuinely changed performance, utilising his own voice, rather than hearing Lack through him).

Can it be a coincidence that Cronenberg, an atheist (“I think atheism is an acceptance of what is real”) should call his psychic-producing drug ephemerol (ephemeral)? The only means of immortality, in Scanners, is continuance through appropriation of another physical vessel (very pointedly, Cameron makes short work of a yoga master, a much-vaunted symbol of spiritual advancement). These new humans embody scientism, despite the emphasis on power of the mind. Symptoms of being scanned – nosebleeds, earaches, stomach cramps, nausea, etc – might also characterise an EM assault. And very pre-Neo, Cameron’s embodiment of the next step in evolution can infiltrate and control computer systems, even if he is not yet one himself (“You have a nervous system and so does a computer”). The title itself, and therefore the skillset of these new humans, invokes technological application.

Cronenberg commented “I’m interested in saying, ‘Let us discuss the existential question. We are all going to die, that is the end of all consciousness. There is no afterlife. There is no God. Now what do we do.’ That’s the point where it starts getting interesting to me“. But it is, also, a very limiting sandpit. Like many with a singular vision, Cronenberg has some very fixed ideas governing his world. He would, for example, be in a pretty pickle if the façade of his philosophy, rooted as it is in Pasteurian virus theory, were suddenly ripped away. It is, after all, the kernel of most of his early work. The idea that it is not only real, but also, look at it from the disease’s point of view: it just wants to survive.

Doubtless he would dispute such reductive characterisation, and it’s undoubtedly a generalisation, but the frostiness of his vision very much keys into finite, materialist perspectives, whereby we may be consumed, leaving nothing of ourselves behind, or whatever is left is curiously removed from any emotionally invested component (and a spiritual one is right out).

It may in part be because my appreciation of his work as a director has always been somewhat qualified, then, but I found this revisit of Scanners more rewarding than I expected. The movie definitely has its issues. Lack lacks the weight Ironside, all twisted, gurning, savaging of the screen, brings to bear. He’s okay, but more striking for his wide-eyed appearance than his performance.

There’s a sense too that the picture’s progression should take more time (Newman believes it goes so fast, you only look at flaws in retrospect). Cameron becomes actualised very speedily, and Revok turns on him even more so; in the space of a single exchange, he decides that’s quite enough of his plan for them to unite (one might argue he was itching for a fight anyway, but it’s still a disappointment).

Likewise McGoohan, who gives a marvellously authoritative performance as Ruth; it’s the kind of element that’s beyond a price tag in what it adds to the movie. Which makes it a shame his character rather perfunctorily exits after muttering to himself about past deeds, receiving a bullet in the head offscreen. Cronenberg also dumps reams of exposition, from Ruth and then from Revok, in a most ungainly manner, clearly having concluded it’s time to wrap things up.

But the bits that work are transfixing, and the tone and atmosphere are aided throughout by Howard Shore’s hypnotic synths. The opening Consec marketing event (“I must remind you that the scanning experience is usually a painful one”) remains a masterful set piece, not merely for its explosive climax. Cameron discovering his powers (“You were, right, Doctor Ruth. It was easy”) and his visit to sculptor Benjamin Pierce (Robert Silverman), who leads a discourse inside a giant head, are compelling. And there’s the scanner group Cameron attends, in which the mantra of losing oneself to the group will has a troubling subtext all its own.

Cronenberg opined that he and McGoohan didn’t hit it off (“His self-hatred came out as anger against everybody and everything”; reference to his drinking may explain why he and Mad Mel got on – well, that and Catholicism). Yet he also noted “But he was sensing the disorganization; the script wasn’t there, so he was right to worry about it”. Lack liked Pat (“a man of vast intellectual capacities and great heart”) but was less effusive about Ironside (“Ironside wants to prove that he’s as good as whoever he’s trying to be as good as. And that’s exciting for Michael and the audience. He does a good villain, though I don’t feel that a good villain necessarily has to scowl”).

I probably first became aware of Scanners through the Starburst cover (I didn’t pick up a copy until much later, but that poster art is an all-timer). And yet, it wasn’t a movie that really stayed with me. It was only watching it this time that I realised a trio of lines on Future Sound of London’s Among Myselves – “I can hear myself”; “I think I’m a little afraid”; “They were drowning me” – are from the picture.

I wonder how Cronenberg sees things just now, whether he’s had his shots and is looking forward to his eventual fate, desperately hoping it’s the transhumanist one, rather than the alternative. His next, Crimes of the Future – the same title as his second film – is apparently an explicit exploration of transhumanism by way of opposing factions; he may be deemed to have been a more persuasive force when he was ahead of the curve. 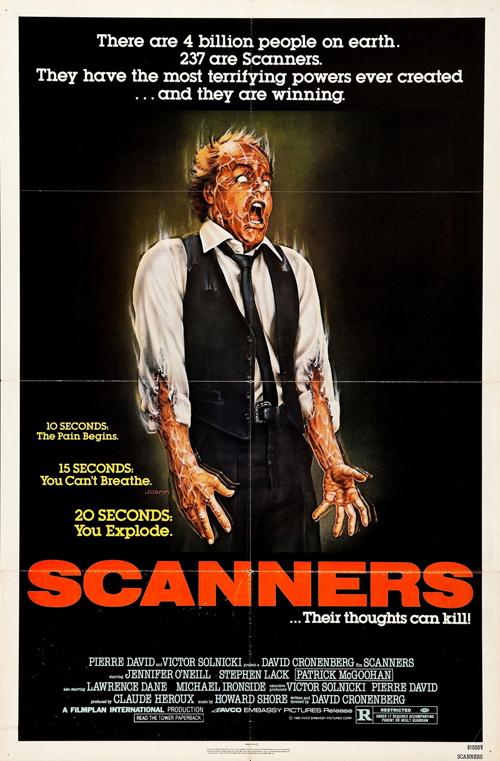 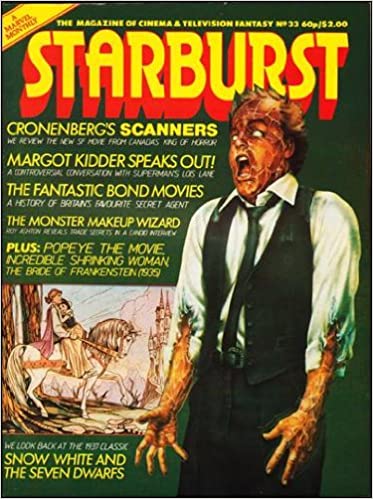