He must have eaten a whole rhino horn!

“I wouldn’t have married Alyce Faye Eicheberger and I wouldn’t have made Fierce Creatures.” So said John Cleese, when industrial-sized, now-ex gourmand Michael Winner, of Winner’s Dinners, Death Wish II and You Must Be Joking! fame (one of those is a legitimate treasure, but only one) asked him what he would do differently if he could live his life again. One of the regrets identified in the response being Cleese’s one-time wife (one-time of two other one-time wives, with the present one mercifully, for John’s sake, ongoing) and the other being the much-anticipated Death Fish II, the sequel to monster hit A Fish Called Wanda. Wanda was a movie that proved all Cleese’s meticulous, focus-group-tested honing and analysis of comedy was justified. Fierce Creatures proved the reverse.

It would be fair to say a prolific career in comedy was no longer Cleese’s priority by the time he made A Fish Called Wanda. He was dealing with messy family business and Shrink-age (Families and How to Survive Them and Life and How to Survive It, written with therapist Robin Skynner). He was making corporate training videos, and making a lot of money from them. He also married the above-mentioned now ex-wife, also a therapist. There was time for bit parts (Silverado) and a lead in a movie he didn’t originate (Clockwise), and Monty Python’s last shout (The Meaning of Life), of course. Consequently, A Fish Called Wanda seemed to justify all that lack of comedic direction, bringing all these threads together and allow them to cohere; he was still in the game, still motivated. It was as important a solo career move as Fawlty Towers had been.

But then. Everyone had a good time making A Fish Called Wanda, and everyone agreed it would be nice to reunite. It took seven years. In the meantime, Cleese appeared in Erik the Viking, Michael Winner classic Bullseye! and Francis Ford Coppola’s Kenneth Branagh’s Mary Shelley’s Frankenstein; after Fierce Creatures he’d pick up where he left off, offering textbook condescension in the Q/R role in Bond, voice work in Shrek, and basically any low-maintenance pay cheque jobs that would contribute to all that alimony.

Fierce Creatures began shooting in 1995 under the direction of Robert Young, a serviceable TV director – G.B.H., Jeeves and Wooster – and a variable big screen one – Vampire Circus, Eric Idle abomination Splitting Heirs. In which Cleese cameoed. In other words, Young was not exactly the British screen legend Charles Crichton was, but maybe it didn’t matter too much. It was all about the screenplay, the great idea, and the ensemble working their magic. Right?

Well, yes. And no. Test audiences didn’t like Fierce Creatures’ ending, in which, it is suggested, both Kevin Kline’s characters (Murdoch-esque mogul Rod McCain and his son Vince) are gored to death by rhinos. Which seems like a curious thing to single out, of all the possible issues one might have with the material. Cast and crew reconvened a year later – Michael Palin was busy until then – for reshoots. Carey Lowell, Robert Lindsay and Derek Griffiths weren’t available, which is why they largely disappear for the final forty minutes. This substantial alteration also explains the co-directing credit for Fred Schepisi. Had it only been the ending, Young – who was also unavailable – would doubtless have retained sole credit (it seems Cleese had been discussing a Don Quixote project with Fred – not with Gilliam! – and it’s reasonable to assume this came about at Steve Martin’s suggestion, Martin being pally with Cleese and having starred in Roxanne for the director).

Cleese had written the screenplay with critic and biographer Iain Johnstone – often an ill omen: see also Peter Bradshaw. But then again, Peter Bogdanovich – but William Goldman was brought in to help retool the ending. Cleese would doubtless argue none of this was new. On Wanda “I think we altogether had 13 screenings after the re-shoots, and edited the film 12 times… Ultimately, the audience tells you what works”. There, Archie Leach ends up with Wanda romantically, in contrast to the “darker, much darker, more sinister ending” where it’s clear she’s taking him for a ride. Curtis was initially pissed at this, seeing it as “tilting towards this American sentimentality and faux romanticism and all of this bullshit”.

The difference, though, is that A Fish Called Wanda had a strong spine. A direction. It was cops and robbers and jewels with a romance plot in the middle, however much tweaking went on with the latter. Even the earlier Clockwise had a strong sense of trajectory and urgency. Fierce Creatures boasted none of that. Was it inspired by Cleese’s love of lemurs (“I adore lemurs. They’re extremely gentle, well-mannered, pretty and yet great fun … I should have married one“)? Perhaps the animal motif that had served him well for A Fish Called Wanda – both in title and sick canine carnage humour – felt superstitiously appropriate. Whatever the reasoning, or lack thereof, the “keeping a zoo open” premise is desperately thin.

Octopus Inc’s Rod McCain counts the zoo among his numerous acquisitions, one that needs to make twenty percent profits or it will be kyboshed. His idiot son Vince is fixated on Curtis’ Willa Weston, employed to run the zoo, while Cleese is Rollo Lee, a retired policeman appointed as the zoo director and working on the principal that fiercer creatures will attract more visitors. Yeah, it’s a mess. Where’s the through line? You can put together a series of weak sketches about making cute animals look fearsome, sure. You can even have tit-for-tat attempts by Rollo to convince the staff he’s shooting the unaggressive animals while the staff produce mutilated guests.

And you can wheel on old Cleese pals like Ronnie Corbett and Derek Griffiths (the former desperately unfunny, but I can’t say I was ever a fan). None of the zookeepers, bar Palin, have a character to speak of, and Lindsay’s a particular bust (I’m guessing Young and Palin vouched for him). Cleese was most likely an ardent appreciator of Licence to Kill’s Bond girl (one of them), understandably so, but the only discernible reason Lowell is in the movie is a scene where she strips to her underwear and another where she sports a revealing leopard costume.

And that’s without discussing the main quartet. Cleese and Johnstone simply haven’t thrashed out decent main characters. Curtis probably fares best, since Willa’s wryly amused pose, fending off Vince while finding Rollo strangely alluring, isn’t so far from Wanda. It certainly isn’t an embarrassment of a role, but it’s nevertheless stricken, since the others are nothing.

Palin’s playing a sketch as Adrian Bugsy Malone, possibly based on the one of his Python chartered accountant (who wanted to become a lion tamer, appropriately enough); his adroit monotone is reliable, but there’s never the remotest sense that he’s an active part of the ensemble, so it feels as if he’s been entirely wasted (except at the reworked climax).

Kline’s Vince is a weak-sauce Otto, awarded only the objectionable-sex-pest aspects of that character, none of the memorably abrasive flourishes and only a smattering of the Anglophobia. Vince only makes an impression – again – during the climax, when he’s impersonating his father Rod. Who is a brash, farting Australian, more the type Mike Myers would play, or Barry Humphries for that matter (Kline also seems to be attempting to channel Jim Carrey at points, always inadvisable). Palin said of A Fish Called Wanda, “I think Kevin’s performance really gave the film its energy”, and the black hole in Fierce Creatures is surely at least partly for that reason.

Quite possibly it was the Goldman factor, but the climax does suddenly manage to click into place, with characters functioning effectively together and comic timing in evidence. You’ve got Rod kneeing Malone in the balls, Malone accidentally shooting Rod in the head (better than goring?) and going out farting, and Kline finding his comic mojo as Vince impersonating Rod (for the sake of a $7bn inheritance). He can be found delivering a crap Australian accent while all assembled attempt to engineer the discovery of the actual Rod – experiencing one of his “black moods” – by Gareth Hunt’s inspector at the crucial moment.

It’s a hint of what Fierce Creatures might have been, were it not for the fatal premise and fumbled characters. Much of the material is otherwise feeble, overfamiliar or mistimed. Rollo sucking blood from someone he believes to be faking it (“Christopher Lee, more like”) is just the wrong side of gross.

As is the realisation that daughter Cynthia is playing a keeper, one repeatedly assumed to be up to sauciness with Rollo. Perhaps Alyce advised John casting his daughter as a zookeeper continually assumed to be shagging his character wasn’t the best thing for his (or her) personal development. Or perhaps she advised precisely the reverse. Funny sorts, psychotherapists, after all. Show them a hotdog sausage and they give you a withering look. Who knows what goes through Cleese’s head, then or now, aside from being a paid-up member of the black-eye club.

One might take a positive view of the animal-conservation element, Star Trek IV: The Voyage Home style (it’s dedicated to Gerald Durrell… and Peter Cook, who wanted “to see every endangered species wiped off the fucking face of the Earth”). But zoological parks aren’t exactly in favour these days.

I’d assumed Fierce Creatures was a resounding flop, but it appears to have made $40m on a $25m budget. Not a hit by any means, but by this point it’s most likely made its money back. Cleese, nearing sixty when the comedy came out, couldn’t be bothered with any new ideas subsequently, aside from a story credit on The Croods. Even the title Fierce Creatures is vaguely antiseptic, as if they were stuck with it because they couldn’t come up with anything better (should have kept Death Fish II). Goldman might have better advised starting from scratch, but Cleese let himself be a slave to the focus groups, and it rather capsized his cinematic boat for good. 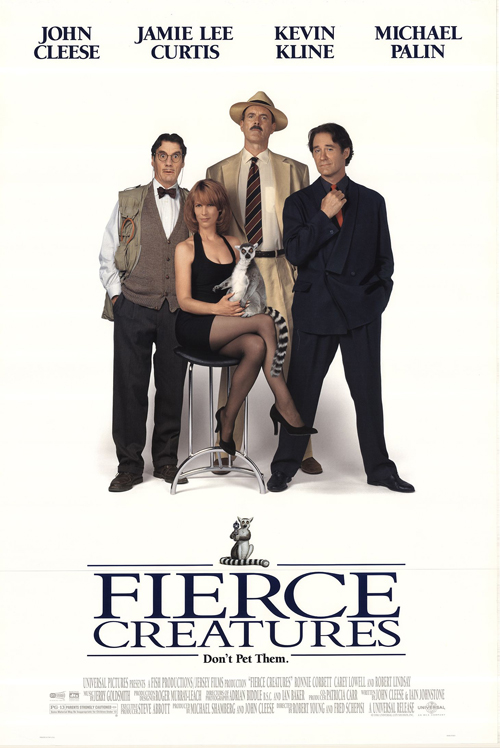