You gave me life, and then you left me to die.

Or Francis Ford Coppola’s Kenneth Branagh’s Mary Shelley’s Frankenstein, to the plebs. Except that Franny was very quick to disassociate himself from the garbage spewed forth by Ireland’s favourite Englishman. For anyone else, this would deservedly have been a career-ending episode. Just look at what happened to another swirling-camera artisan with another crude goth knock-off; Stephen Sommers struggled to catch a break after Van Helsing preposterously failed to be the next The Mummy. But a trained luvvie with boundless self-regard was bound to bounce back. Sir Ken retreated to Shakespeare for a few years (and an equally overblown “definitive” Hamlet) before eventually returning to the mode of mediocre (at best) Hollywood behemoths with the likes of Thor (the Second Unit saved it), Jack Ryan: Shadow Recruit, Cinderella and Murder on the Orient Express. All of which proved to any doubters that, as a director, he’s a less than talented hack.

And on the evidence of his performance in Mary Shelley’s Frankenstein, he isn’t much of a thesp either. Yes, the then-heralded successor to Sir Larry is really sucky as a Hollywood star. He’d been noticed by Tinseltown, obviously, because of Henry V. Then Dead Again, his first US foray – complete with requisite dodgy Yank accent – did mystifyingly brisk business. Everyone loved Ken, and Ken was going to show them he was hugely loveable. As loveable and desirable as your Costner or your Willis or your Mel or your Tom. Thus, he attacks the material – Frank Darabont’s material – with misplaced narcissistic vigour, turning Mary Shelley’s mad scientist into a shirtless, potbellied homunculus, a Byronic twat with a MOR-rock mullet.

Ken’s face is devoid of character, a doughy pudding attempting to inhabit a deluded scientist. When he sports a beard, he simply looks like he’s trying much too hard. In a ginger kind of way. His self-belief in his own swoony studliness is by far the funniest thing about the movie (that it seemed to work on Helena Bonham Carter in reality – to Emma Thompson’s cost, or should that be ultimate good fortune? – is, well… She ended up with Burton, didn’t she? Tim, not Richard).

Whether he’s wooing adoptive sister Elizabeth (Bonham Carter) or writhing around in a risibly homoerotic pool of post, or pre,-Freudian birthing fluid, Ken is abjectly awful (thematically, the latter sequence echoes the absurdly bloody early scene in which Ian Holm, also stripped to the waist, has his hands up wife Cheri Lunghi in an attempt to deliver their baby. He emerges festooned in her innards, tumbling down an absurdly immense and operatic staircase).

Ken at least isn’t alone in his rubbishness. He coaxes some truly terrible turns from his co-stars too. Frankenstein is an embarrassment of shitses. Right from the off, there’s Aidan Quinn (as a ship’s captain) doing his level best to meet Ken amdram overemphasis for amdram overemphasis. Tom Hulce, ten years on from Mozart, was, I feel sure, cast as a measure to make Ken look good, and if it doesn’t work, Hulce does his darnedest (he apparently replaced Christopher Lambert. My suspicion is that Chris was too tall for pint-sized Ken to share the screen with).

Helena is horrifying, reminding you why she was such an objectionable creature during her Merchant Ivory phase. This is also a rare instance where Holm can come up with nothing to remedy matters. Robert Hardy is solid as a tutor denouncing Vic, while Briers does his patent Briers as the blind hermit. The surprise is John Cleese, with different teeth, hair and delivery, who is actually quite decent in the straight role of influencer of Vic’s unnatural experiments.

And then there’s Bob. De Niro was beginning to enter his parody phase at this point. Even his work with greats this decade (Casino, Heat) delivered films that were much more notable than his now-familiar performances in them. His creature comes very much from the guy who played Max Cady and earlier still Louis Cypher. Bob makes for possibly the most anaemic creature imaginable, so reflecting the makeup, which is good, but neither interesting nor inspired.

Thus, the diligence of Darabont’s adaptation is buried beneath utterly unnuanced performance and delivery. There’s zero connection between beast and creator, even when they’re slopping about together in amniotic fluid. And while the lines are there, any sensitivity of poetry is beyond Bob. “Because I am so very ugly and they are so very beautiful” he tells Briars of why he cannot go home, before spinning on a dime and exclaiming “I will have revenge!” as he burns down the hermit’s home. “He never gave me a name” he commiserates with himself at the end, and cries because “He was my father”. Yet the observation is meaningless because no relationship or connection has been established.

This is typical of Ken’s approach: swathes of bloody overkill but absent any emotional core. In his own inept way, he seems to be attempting to ape superhero movies; the super-strength toad leads to a super-strength Bob, leaping at Ken in inglorious slo-mo amid the snow. That and his later leering through a skylight are among the Creature’s Batman moments. Then there’s Elizabeth, reduced to the states of a bride and renouncing affections for either suitor before engaging in some OTT overkill as she rampages aflame down a corridor (that bit was Ken’s bright idea). It’s all quite ghastly.

For Ken, the lack of an iota of artistry means the artifice is evident despite the cost. The ice sequence sets are very obvious sets. DP Roger Pratt, so good for Gilliam, rather combusts under the strain of Ken’s relentlessly roving camera and complete lack of acumen for atmosphere. Mary Shelley’s Frankenstein fails even to work as a melodrama, let alone a horror. Crazy camera “save the baby” freneticism is just the start, and the picture never stops. To the point that, when Victor attempts to dance with monster Elizabeth, we’re “treated” to a flashback medley of dizzying camera swirls (lest you assume Ken has matured or become more stylistically conscious with age, Murder on the Orient Express’ signature shot was a zoom in on Poirot walking on top of the train). And yes, we keep returning to the loooong staircase, the looongest ever.

Darabont was not impressed, quite correctly. Here’s Frank being frank about Frankenstein:

I think Ken Branagh will probably think I’m after him now (laughs). We’ve all heard stories about their work didn’t turn out the way they wanted when it hit the screen. This is my prime example of a movie I wrote going down the shitter. In my opinion, I think Frankenstein was one of the best things I ever wrote. Easily equal to The Green Mile. And that wasn’t the movie that Ken Branagh wanted to make. He wanted to make something else. What he made I thought was a dunderheaded, ham-fisted mess. But I wasn’t the director on that, so…I felt like he tried to reinvent the wheel every step of the way. It’s so dumbed down. It’s so bombastic, that I was just flabbergasted. And let’s describe Mary Shelley’s novel: very understated, very smart, conceptually brilliant. I don’t know what happened there. Had I known how it was going to turn out, I never would have done it. My all-time favourite book is Shelley’s Frankenstein.

He was being too kind there. Although, his dialogue isn’t always so choice (“It’s not often a man has his wedding night” Ken is told by his right-hand man. This is true. Unless you’re John Cleese). The most interesting part of the movie, from the current perspective, is one I wasn’t expecting, less still recalled. Turns out the monster is an anti-vaxxer. But by implication, science creates anti-vaxers and then creates monsters from them. Not unlike The X-Files, science extolling the benefits of receiving the shot also betrays that those doing so are entirely unscrupulous. Victor proudly announces “You take vaccines for instance. Thirty years ago, the concept of vaccine was unheard of, and now we save lives every day” before waxing lyrical about how, if you have a sick heart, you can be given a healthy one. It’s the pre-monster man (played by De Niro, and much more interesting in this brief turn than his monster manifestation) who objects to the vaccination programme of Cleese’s Professor Waldman (the movie’s own Fauci):

Bob: You’re not sticking that in me. It’s got pox in it, I hear.
Woman: Pox? They given us pox?
Bob: Pox.
Waldman: It’s not pox. It’s a vaccine.
Bob: What’s that?
Waldman: It’s a vaccine that will prevent a plague in this city. It’s a tiny, harmless amount of anti-small pox serum.
Bob: You just said pox!
Waldman: I said it was harmless. It’s a necessary precaution without which this godforsaken city would be immediately put under quarantine.
Bob: You doctors kill people. I don’t care what you say. You’re not sticking that in me.
Waldman: Yes, I am. It’s the law!

Now here, the forced vaccinations unsurprisingly lead to violence (De Niro stabs the doctor in the neck with his syringe). And it turns out that everything the “superstitious” “unscientific” fool says to Waldman is fair comment. The key to the afflictions of the urban environment, of overcrowding, bad air, water, vermin and putrescence are the true elements leading to the realisation “This cholera is an epidemic!” But the scientific vanguard of Mary Shelley’s Frankenstein – the same ones now leading the transhumanist charge – are steeped in early (Pasteurian) virus theory, and their backwardness soon leads to widespread suffering (Briers’ family’s livelihoods are threatened by the quarantine).

Reportedly, Coppola wanted to re-edit the movie when he saw Ken’s cut. I dare say he was minded to bin it entirely. While there’s no doubting his Bram Stoker’s Dracula is riddled with excess and indulgence, it’s also unmistakeably the work of someone with talent to spare. Mary Shelley’s Frankenstein, in contrast, is entirely bereft. It is a blighted movie. An abomination. 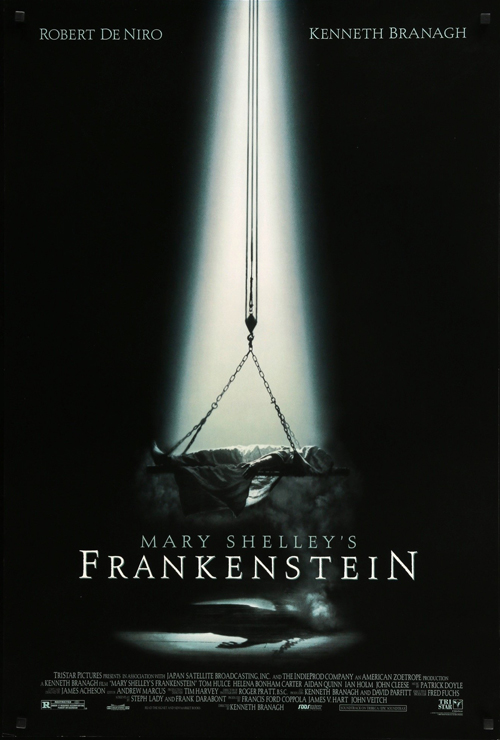