Man, this is crazy. Some guy calling me a sausage?

Elvis was a hero to most… John Carpenter dives into some (relatively) uncharacteristic genre-busting, the biopic being an area neither horrormeisters nor wunderkinds were yet tackling (Scorsese with Raging Bull, Wes Craven to deafening silence with Music of the Heart). Carpenter agreed to it because he “wanted to do something different” and, with regard to the King, he “liked him very much”, thank you very much. He made it for TV, although the 168-minute movie would turn up in a two-hour European theatrical cut. How well does it fit in with his oeuvre? Well, despite a spirited performance from Kurt Russell (with Ronnie McDowell providing note-perfect vocals to the hits, at least, to my tin ear), it’s a rather indifferent affair, rendered so by a combination of determinedly biopic-by-numbers screenplay from Anthony Lawrence and the vanilla demands of network TV.

The rather bland, A-Z approach can’t really be laid at the director’s door, as he had no input in the editing (or the score). Although, how much he could have made a dent on network strictures anyway is debatable. We join Mr Presley readying to play Vegas on July 26 1969 and proceed swiftly into a flashback, an earnestly indifferent deep dive through his childhood and career and personal life to that date; the bookend of Vegas offers the rapturous crowds and the promise that he will “go on forever”, so missing on the subsequent burgers, burgeoning waistline and drug abuse. Which, some might say, is the best part.

There’s conflict on the way, with pal Red West (Robert Gray) and the entourage. And Priscilla (future Mrs Russell Season Hubley) starts off young – fourteen, hmmm, yes; taking a leaf out of Jerry Lee Lewis’ book there, and a profound influence on Bill Wyman – and ends up stifled. Pat Hingle appears as Colonel Tom Parker (soon to be incarnated by Guantanamo Hanks in Baz Luhrmann’s doubtless motion-sickness-inducing Elvis movie), but is less of a presence in the second half of the movie. A young Joe Mantegna (in his TV debut) is road manager Joe Esposito. Shelley Winters casts a long shadow over the first section as doting, stricken momma Gladys, with Kurt’s own dad Bing less memorable as Vernon Presley. Ed Begley Jr and John Travota’s sister Ellen can also be seen.

Kurt isn’t as pretty as Presley, but he gets the snarl down pat, and in some shots he’s as close to a spit as you could feasibly expect. He’s evidently having fun with the early, hip-thrusting model (“They’re calling me Elvis the Pelvis!” he declares of his reviews, aggrieved), but once Elvis has been called up, rather like the real deal, it’s all downhill for the movie. There’s more than enough material to mine some golden nuggets, but the picture continues shallowly, dredging torpid melodrama instead, along with some fey introspection on Presley’s part (“I got it all, but I still feel like there’s something missing, you know? What’s it going to take to fill that up?”) Plus some very literal psychoanalysis (“What are you running from? What are you so afraid of?” asks the increasingly entrapped Priscilla).

Russell mimes decently enough, and it’s understandable that a significant wodge of the running time is spent on the performances (it helps that the classic Suspicious Minds comes at the end). Cinematographer Donald M Morgan is no Dean Cundey but fortunately no Gary Kibbe either (he’d go on to lens Carpenter’s Christine and Starman). Mostly, Elvis is a conspicuously anonymous TV movie, more notable for beginning a rightly-celebrated director-star relationship than being very remarkable in its own right. 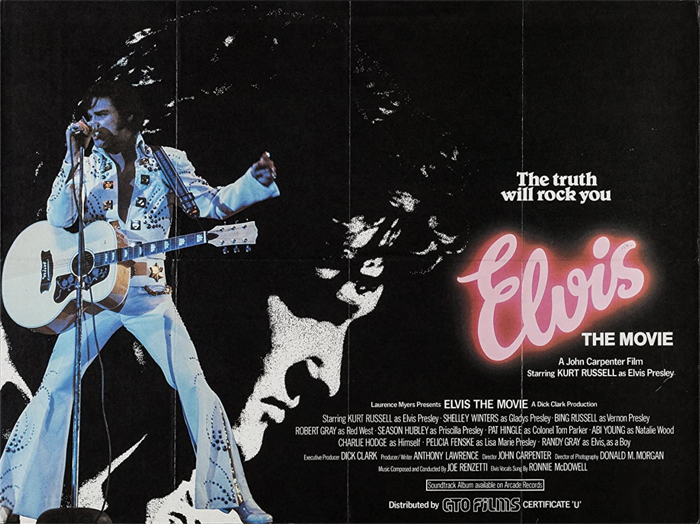