I’m not the killer that little girls call their hero.

To suggest the MCU largely comprises a production line in which homogeneity is key is stating the obvious, but that hasn’t prevented it from occasionally coming up with something sufficiently distinctive to merit praise. Nor has it, for the most part, detracted from the series being largely watchable, if also largely undemanding. It may have suffered exits of those insufficiently on board with its general directive – Edgar Wright, more recently Scott Derrickson – but it’s also been quite rare for the formulaic nature of Kevin Feige’s visions to get in the way of a serviceably slick time of it. Captain Marvel comes to mind, where the empty space at its centre drew attention to just how mechanical its entirety was. Black Widow is similar, but more so by a significant multiplier. Much like its now deceased supporting character made main protagonist, it’s entirely redundant, not only inessential but also actively retrograde.

As ever, Marvel making a deal of its directors – for reasons of woke, obviously – is entirely beside the point, since seventy to eighty percent of their average picture is second unit and/or CGI/green screen. You might get a sense of someone calling the shots if they also have a screenplay credit, but otherwise, good luck. So Cate Shortland ticks the necessary representational box, and– at best – you could say there’s a spot of faux-Malick natural light (or its post-production equivalent) in there. For more of that – faux-natural light – see the forthcoming Eternals. Come the tediously excessive pixel clash of the climax, her guiding influence is evidently minimal, and consequently, there’s at best a grudging coherence to the editing, Gabriel Beristain likely cursing that whoever was in charge thought it would all somehow come together in post.

Feige is now putting his progressive foot thoroughly forward, in lockstep with the decrees of his overlords (no, not Doomcock, a different overlord entirely), and we’ll see how long the Marvel faithful stick with his every move. It’s been suggested the Disney+ series haven’t been getting the hoped-for traction, but it’s difficult to find non-partial analysis of viewer uptake and more difficult still to access reliable data on that viewer uptake. Certainly, though, in the wake (or woke) of Endgame, there’s a sense of dissipation, that Feige simply hasn’t come up with enough goodies to induce true viewer salivation.

Shang-Chi and the Legend of the Ten Rings with its wooden lead? Eternals with its D-list superteam and confusion over why you should care (not to mention its vastly overrated director, but again: see second unit above)? The more of the same (comedy Thor: Love and Thunder, Peter Parker and the New Mentor Figure Stealing His Limelight, Doctor Strange and the Raimi of Madness) may or may not land, but kicking off Phase Four with a prequel, one featuring a dead character you never found the time to give a solo vehicle when she was alive – until you were looking really bad compared to DC’s gender-representational example of, all places – isn’t really the best way to instil enthusiasm.

Indeed, one might almost think Feige was attempting to prove Ike Permulter’s antagonistic stance towards female-led superhero movies correct, given the weak sauce he’s stirred up so far. Captain Marvel arrived as a belated, retconning attempt to insert Carol Danvers into the MCU and was singularly let down by the devastating combination of uber-godlike powers (so where’s the danger?) and bland lead (and one prone to inflammatory remarks). Making a Black Widow movie retrospectively seems like a slap in the face, since it’s served up as a one-and-done deal (completely with new Widow in the wings… one instantly relegated to a support slot in a TV show, mind).

Now, your mileage may vary and doubtless it does, but I’ve never been a big Scarlett Johansson fan, and I was firmly in the Emily Blunt camp when it came to the character’s initial casting. Scarlett’s emotional void is unfortunately called upon to carry Black Widow, where before she simply failed to fill dud scenes, and the results, or lack thereof, are undeniable when stretched to movie length. Perhaps Black Widow would have worked had it been conceived on a smaller scale, rather than the sub-Bond (sub, sub Moonraker, although the clip isn’t really that representative of a plot steal) fare it attempts to be. Trying to make a good thriller with Black Widow – something closer to Red Sparrow in scale – would surely have been more effective than overlaying the standard-issue, bigger-better-faster-boom Marvel template. But then, what would the shareholders have said?

Indeed, on that level, the Disney+ approach might have yielded some dividends in terms of pursuing a different tone – the counter being Falcon and the Winter Soldier, similarly mechanically retrieved as this, and also lacking genuine superpowered superheroes, but much longer. Natasha Romanoff, at least as Johansson plays her, is entirely uninteresting. That’s not to say the MKUltra meets The Americans prologue, with young Natasha (Ever Anderson, daughter of Milla Jovovich and Paul WS) and her spy parents Alexi Shoshtakov (David Harbour) and Melina Vostokoff (Rachel Weisz), didn’t have some potential. Quickly squandered when their escape devolves into the standard MCU FX overkill (did Alexei spend the entire flight to Cuba on the wing? I guess that’s just how super-soldiers roll).

The plot doesn’t bear close analysis, revolving as it does around the chemical mind-control agent – and its antidote – that gives villain Dreykov (Ray fackin’ Winstone) power over his brood of Black Widows. Whatever happened to good old-fashioned brainwashing? Too messy, I assume, for a plot from Jac Schaeffer (yay! female writer), Ned Benson (boo! man) and Eric Pearson (double boo!) screenplay. Being able to flick a switch (or release a cloud of transformative gas) makes for less hard work. Naturally, the flicker is a loathsomely evil man, preventing the sisters from doing it for themselves. He lives in the sky (where the processing Red Room facility is based) and is everything you’d expect from Winstone attempting a Russian accent; tiresome, unconvincing and utterly lacking in villainous verve.

There’s some exposition about his entire network of Slags, I mean Widows, calling the shots with world leaders (“…these great men, they answer to me and my Widows”) but it’s a comprehensively unpersuasive attempt to ape the idea of a hidden elite pulling the strings, as well as a rather unsubtle suggestion that Russia is responsible for all our ills (always a popular go-to ploy). We’ve seen this before with Hydra, of course, and the MCU is generally pretty incoherent when it comes to putting to rights the forces behind every wrong (shouldn’t systems improve after their evil orchestrators have gone kaput? You’d think…)

Natasha’s given a very specific guilt complex in this, having killed Dreykov’s young daughter Antonia during her attempt to assassinate him. Turns outs she’s still alive, bioengineered – a transhuman chip in her head – and assuming the mantle of the unstoppable Taskmaster (it was fairly evident that the character would be revealed as a woman – gender swapped from the comic – as soon as she was set up as a mysterious foe). This depth is nanochip deep, however, entailing numerous of shots of Scarlett’s empty eyes pleading with Antonio (Olga Kurylenko, half a decade older than Johansson). More fruitful might have been concentrating on the human-machine conflict in the character, but that might have elicited actual dramatic engagement. Instead, Taskmaster is simply a cypher.

The picture stumbles, perhaps most damagingly – set pieces and villains and fights are all fairly interchangeable in the MCU – with its non-nuclear family dynamic. There’s zero spark between Natasha and “sister” Yelena (Florence Pugh, bravely spurning standard Hollywood etiquette of employing a personal trainer), such that you’re half-expecting tumbleweeds to traverse the terrain, or dashboard, whenever they engage in “snappy” banter (most egregious being the self-conscious strike-a-pose dig from Yelena. If she’d said something to the effect of “And isn’t strange how we never see your face when you’re in the middle of incredible stunts?” I might have flickered a smile).

Likewise, comic relief Harbour, who, in his Red Guardian regalia – as a friend pointed out – rather resembles The Cannonball Run’s Captain Chaos. Harbour’s really trying hard, but even safe-bet material – “My father goes toilet on my hands” – meets with a frosty silence. Weisz is there to offer Natasha platitudinous tributes (“Tell me, how did you keep your heart?”) and is as entirely forgettable as she always is on those occasions (admittedly fairly rare) when she ventures into Hollywood fare. O-T Fagbenie is Natasha’s sidekick. He’s shit. Julia Louis-Dreyfus returns from Falcon and the Winter Soldier, further cementing her flinty reinvention now she’s in her sixties. I prefer Elaine Julia. I also prefer the original Smells Like Teen Spirit to the dreadful dirge of this slow-tempo “soulful” take.

There’s one inspired sequence in the whole movie, and it stands as testament to how wholly unengaging the main cast are. Melina keeps pigs she trains up in a maze; she can control them remotely, such that she “switches off” one piggy’s breathing. Poor piggy is slowly suffocating during an extended piece of exposition, and all we can think is “Poor piggy!” It’s the only truly dramatic, tense scene here. The whole enterprise would have been exponentially improved as a superhero Babe, with Mr Piggy seeking revenge on Melina: a guaranteed five-star classic.

The choice between venturing to the cinema to see Black Widow or taking in a Disney+ viewing wasn’t really difficult, since there seemed no good reason – cinematically, vista-speaking – to go to the extra effort. There was universal agreement among those assembled of Black Widow’s lack of merit, aside from the attendee who fell asleep. Which speaks volumes in itself.

Has the MCU ruptured itself? I’d argue, since Hollywood – and Disney in particular – has been playing the woke card so shamelessly, it’s become less and less easy to bring audiences on board; even those amenable to the “message” don’t tend to like being patronised, something we’ve seen very visibly with the fallout on the Star Wars universe. A similar fate may be in store here, with only fanboy – the series’ bedrock, whether Disney realises it or not – wet dreams (the multiverse) to hold back the tide. 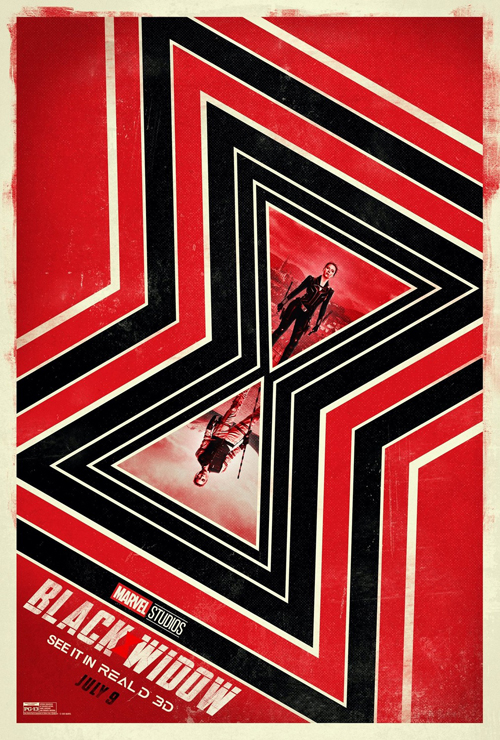