I want the secret of the cards. That’s all.

Marty Scorsese’s a big fan (“a masterpiece”), as is John Boorman, but it was Edgar Wright on the Empire podcast with Quentin “One more movie and I’m out, honest” Tarantino who drew my attention to this Thorold Dickinson picture. The Queen of Spades has, however, undergone a renaissance over the last decade or so, hailed as a hitherto unjustly neglected classic of British cinema, one that ploughed a stylistic furrow at odds with the era’s predominant neo-realism. Ian Christie notes its relationship to the ilk of German expressionist work The Cabinet of Dr of Caligari, and it’s very true that the picture exerts a degree of mesmeric immersion rarely found in homegrown fare.

Based on Pushkin’s 1834 short story – there are at least five other film adaptations, all Russian or German – the writer’s inspiration is said to have been Princess Natalya Petrovna Golitsyna (Princess Moustache, due to her increasingly prominent facial hair, lived to sprightly age of 96). She was a socialite and a noblewoman, a maid of honour to Catherine the Great who reputedly gave her grandnephew the secret of three magic cards; as per the story, these being the Three, the Seven and the Ace. This secret had in turn been given to her by her friend, the Count of Saint Germain. Natalya’s grandnephew was said to have then told Pushkin (much of this inspiration is disputed and has also been attributed to another lady-in-waiting, Natalia Zagryazhskaya).

Pushkin hailed from Russian nobility himself (and was descended from an African slaveowner on his mother’s side), so he clearly knew a thing or two about this area. However, his principal character is Herman (Anton Walbrook), considered a relatively lowly captain in the Imperial Russian Army’s engineers in 1806, lacking the pecuniary or societal status of his peer group (hence “I’ll show them all one day”). Herman hears of the secret of the magic cards during a game of Faro (he neither takes part in the games nor the debauch with “gypsy” entertainers: “Gypsies! May as well call them what they are”). He concocts a plan to learn the secret from an aging countess (Edith Evans) who lives in St Petersburg, which involves him cynically wooing her ward Lizavetta (Yvonne Mitchell). Things don’t quite go as planned, though, for the countess snuffs it in fright when Herman becomes threatening, waving an unloaded pistol in her face. He believes his errand has been in vain (and confesses his plan to Lizavetta, who is understandably unimpressed and distraught). But then…

In both the short story and the film, there’s an emphasis on the unreliable narrator – is the supernatural unfolding real, or a figment of Herman’s fevered mind? – and Dickinson reportedly rejected showing the ghostly countess outright, emphasising instead spooky sounds and supernatural omens (wind, subjectively seeing the countess open her eyes at the open-casket funeral). In contrast to the story, Saint Germain is very clearly emphasised – via the flashback tale – as a malevolent force. Here, the nature is that of a pact, of selling one’s soul to the devil, for it is believed this is what the countess did.

In one of the moments rather suggesting a literal interpretation of events (or subjective experience or uncanny coincidence – Ian Christie also notes the subjective lens present in Olivier’s earlier Hamlet and Val Lewton’s Cat People), Herman visits a local bookshop and spies a volume on The Campaigns of Napoleon Bonaparte. He reaches for it but dislodges the exact tome he yearns for: “This is a very rare book. It tells of strange things that some would say are better left alone” Ivor Barnard’s ghoulish, cackling bookseller informs him. The Strange Secrets of the Count de Saint Germain contains “the true stories of people who sold their souls in return for wealth, power and influence”. One such listed is Countess R – Countess Ranevskaya – in Chapter IV (the book is dated 1762 book, yet the story tells of events in 1746, “sixty years ago”; maybe it was a reprint).

Saint Germain took up residence in the vaults of the St Petersburg palace, where he fashioned a selection of wax figures “containing souls of those who had fallen under his evil influence”. He lured the countess to his lair, where he gave her the secret of the three winning cards; she vowed no one else would ever know the secret and promptly won a fortune, “But the visit left a mark on her soul for the rest of her life”.

This isn’t the most complimentary depiction of Saint Germain, of course. More frequently, he is upheld as an ascended master, starting with the theosophists and continuing through to Rudolf Steiner (Christian Rosenkreutz was Saint Germain, and some saw Steiner as an incarnation of Rosenkreutz). And from there, onward to the New Age movement. Dickinson reworked Rodney Ackland and Arthur Boys’ screenplay and noted the influence of his discussions with Evans – a Christian scientist playing one who sold her soul – and her familiarity with Hindu religion. He accordingly formulated “the notion that the Devil does exist as the dark side of goodness” based on Hindu cycles (winter/summer).

In his introduction to the interview with Dickinson, Bob Baker suggested the former was “not a philosopher-filmmaker” and that “A study of his work will not reveal any recurring themes on the nature of the human condition. His personality is present in his films at a second remove”. Yet it is evident Dickinson put a significant degree of thought into the material’s thematic content, far beyond simply replicating Pushkin.

The framing introduction emphasises many superstitions concerning the cards – “one of these was the evil influence of the Queen of Spades” – such that the picture places an emphasis on the corruption and perception of the spirit from the first. At one point, Andrei tells Herman “I believe all humans are fundamentally good, and evil is a force, a mighty force that is abroad in the world to take possession of men’s souls, if they allow it to”. On a thematic level, this holds true of Herman, even if one chooses to interpret events as incipient madness à la The Innocents. “I’ll take your sin upon my soul!” Herman pleads with the countess, before she carks it.

It’s very easy to see why The Queen of Spades has been so feted by cineastes like Scorsese: “one of the few real classics of supernatural cinema”; the “precision of the sound and the editing”; it’s “uniquely haunting”. I did, however, find the mid-section a little less compelling, as Herman slavishly pursues the seduction of Lizaveta, copying out poetry to win her heart while her other admirer Andrei – Ronald Howard, with a touch of wet Lord Percy from Blackadder II about him, despite being the “good guy” – is admonished for slurring him. In contrast, the picture’s last third of is sheer dynamite, from the moment Herman gains access to the countess’ house.

His unnerved response to the countess’ dead staring eyes and flight through a secret exit into the early morning is vivid, and his subsequent haunting ranks up there with any horror movie (the door creaking open, the curtain blowing in the wind, and the shuffling sounds along the floor). It’s Herman’s failure to abide by the ghostly condition “That you marry my ward” that muddles his winning streak at Faro (it’s a bit like Snap). One wonders if anyone overhearing the secret decided to try it themselves? Certainly, The Queen of Spades concludes very neatly for winning Andrei (not that he didn’t have the readies anyway), releasing captive birdies to Lizavetta’s delight. As for Herman, his fate appears to be that of an unhinged mind (in the story, he is committed to an asylum). Notably, a duel was earlier on the agenda between the two men; Pushkin himself would be fatally wounded in such an altercation.

The performances are highly memorable. Makeup-strewn Evans comes on Like Alice in Wonderland’s Queen of Hearts as envisaged by Terry Gilliam in Brazil. Walbrook is appropriately obsessed. Miles Malleson shows up as a bookkeeper and Pauline Tennant, herself of aristocratic birth, is particularly striking as the young countess. The visuals are even more so. Otto Heller was an aces cinematographer who later worked on The Ladykillers and The Ipcress File, but his work here is truly something special.

Dickinson was called in at less than a week’s notice to replace another director Walbrook didn’t much like. Star and director previously worked together on the English Gaslight (the one that came first and wasn’t nominated for Best Picture Oscar): “we had to alter much of the script as we went along”.

He also observed that “it took us weeks before we discovered where the flashback should go” and that “after a few days, I said ‘By the way, this card game, how do you play it?’ And nobody knew!”. They were shooting six or seven weeks before they understood the rules. You’d scarcely credit the production and sets were so modest, given how sumptuous and atmospheric the imagery is. Dickson’s guiding principle was that “the challenge has always been to make a film that can be watched without one necessarily hearing the soundtrack at all” and there are long sections of The Queen of Spades achieving exactly that. Although, perhaps in the case of the gypsy “song”, which I’m convinced contains no actual intelligible words, an absence of soundtrack would also have been preferable.

In considering Dickinson’s oeuvre, Baker suggested it would be appropriate “to define the pleasure to be had from them as primarily aesthetic” and “His films can be read as ‘texts’ but it seems more fulfilling to watch them as films”. I can certainly see that argument with The Queen of Spades. It’s possible Dickinson was a little too malleable politically, turning against the Soviet regime (The Secret People), making WWII propaganda pictures and, most damning of all, heading film production for the UN. Or perhaps he was simply naïve (“he believed that people were as idealistic and good-hearted as he was”) in the way that Andrei is. I perhaps wouldn’t go as far as Scorsese in presuming its masterpiece status, but The Queen of Spades, which earned a BAFTA nomination for Best British Film, is an aesthetic delight. 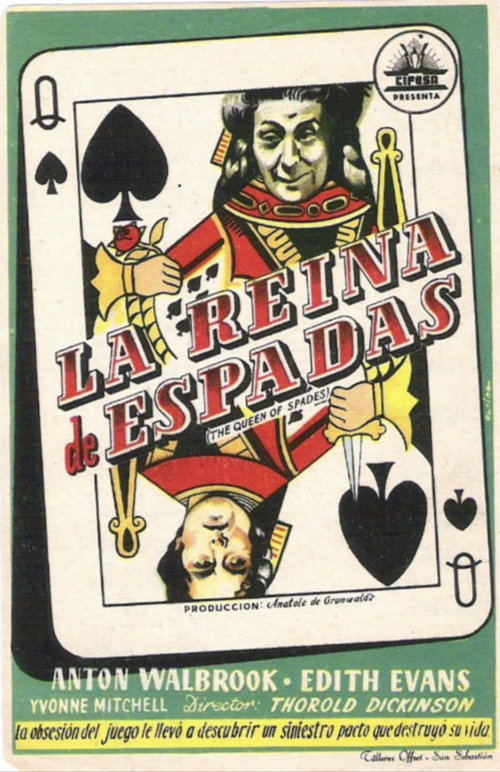