Here’s Bloody Justice for you.

The beginning of a comedic run for director-producer Mario Zampa that spanned much of the 1950s, invariably aided by writers Michael Pertwee and Jack Davies (the latter went on to pen a spate of Norman Wisdom pictures including The Early Bird, and also comedy rally classic Monte Carlo or Bust!) As usual with these Pertwee jaunts, Laughter in Paradise boasts a sparky premise – renowned practical joker bequeaths a fortune to four relatives, on condition they complete selected tasks that tickle him – and more than enough resultant situational humour.

While Laughter in Paradise doesn’t quite reach the consistent peaks of the later The Naked Truth (1957), it distinguishes itself through the fortification of a benign moral centre. This is best illustrated by the rather touching plotline devoted to Agnes Russell (Fay Compton), introduced as a glowering, flinty disciplinarian set to dismiss maid Ethel (Charlotte Mitchell) when she hears the news of her £50,000 inheritance (£1.6m today). However, her task, to serve as a “domestic servant in a middle-class home” for a month, her bequeathment to be forfeited should she be dismissed or resign, brings about a change in her outlook as she realises what a right bag she has been. Lest this plotline sound too severe or melodramatic, it is noticeably buoyed by the presence of John Laurie as the “old” man she must attend to (Laurie was a mere stripling of 54 at the time).

Guy Middleton has the contrasting “doesn’t learn anything” subplot as Simon Russell. He’s essentially playing the Terry-Thomas part, had this been made half a decade later. Simon’s a shameless cad and bounder who thoroughly enjoys his roguish ways; when he’s told he must marry the first woman he speaks to following the reading of the will – he quickly defaults, since he doesn’t marry Audrey Hepburn’s cigarette girl – he’s entirely up for the challenge.

Unfortunately for him, his slipperiness finds him telling his butler Benson (Mackenzie Ward) – another of the rules is that no one else is to be informed of the details of the challenges – who then surreptitiously sets him up with his niece Lucille (Beatrice Campbell). Come the conclusion, when the executor reveals there wasn’t, in fact, any money at all, everyone involved, having been improved by the experience, can see the funny side. Except for Simon. Until he realises how much this will put out Lucille, whereupon he too has a good chuckle.

Just like Agnes – who is fired from her job, but Laurie then shows up to take her out to dinner – George Cole’s Herbert Russell fails at his task. He’s a mild-mannered bank clerk tasked with standing up to his fearsome manager (Ronald Adam) by holding him up with a water pistol and procuring the keys to the bank for two minutes. Naturally, Herbert repeatedly bungles this, along the way having to deal with a stinker colleague (Michael Pertwee) while being encouraged by a sympathetic one (Mary Germaine); the final turn of events, however, whereby he walks in on an actual robbery, so foiling it, finds him promoted to branch manager and getting the girl.

Cole’s serial ineptitude parallels the best plot, in which Alastair Sim’s Deniston Russell must incarcerate himself for 28 days for a genuine crime. Naturally, this is easier said than done. Deniston is a writer of pulp crime fiction, which he has published under fifteen different pseudonyms (he lends Herbert The Bank Banditas prep); his identity is unknown to fiancé Elizabeth (Joyce Grenfell), an “officer and a lady”, and her magistrate father Sir Charles (AE Matthews). Obviously, Elizabeth is entirely unsuited to Deniston; devoted secretary Sheila (Eleanor Summerfield) is, really, his ideal match. The various trials and tribulations he endures, culminating in a court appearance, lead Deniston to this happy realisation (he succeeds in his mission, but he has already admitted the outcome of events are reward enough prior to learning there is no inheritance).

The sequences in which Deniston attempts various thefts and criminal undertakings are highly amusing. These include probing the police for details of a suitable endeavour and trying, to no avail, to get pinched in a department store (when he is eventually stopped, it turns out he has already been pickpocketed of his purloined items). He eventually accomplishes the double whammy of throwing a brick through a shop window and hitting a policeman with his brolly – the latter, in casual-afterthought Sim style, is a delight – so ending up before Sir Charles, whom he insults to boost his sentence to the desired term.

There are numerous amusing lines and plays on words in this subplot. Facing seemingly insurmountable odds at his task, he asks Simon if he can rob him: “I couldn’t possibly burgle somebody I didn’t know”. He allows his prospective family to believe he may be going undercover behind the Iron Curtain (behind bars) and relates that one of his book plots involves an entire football team being poisoned on the eve of the FA Cup final (“I’m afraid it was the goalkeeper’s daughter”). Deniston’s nom de plumes include one Gloria Trubshaw, while Sheila announces “I’m just longing to get on with Bloodlust” before offering the Sir Charles evidence of her employee’s credentials (“Here’s Bloody Justice for you”). Grenfell, having already appeared opposite Sim in several movies (including Hitchcock’s Stage Fright), is on fine form too as she scolds Deniston for being a “complete rotter to poor, darling daddikin”.

Pertwee and Davies, although they set the scheme up as wheeze on the part of Henry Russell (Hugh Griffith) – “I died flat broke!” – ensure no one involved is really going short. Both Denistion and Agnes are doing nicely for themselves, and Herbert has a secure job. Only Simon is a bit skint, but that’s because he keeps a butler and is an inveterate gambler, rather than any true hardship. The title’s a little on the self-satisfied side, it has to be admitted, one of those that might well put viewers off since its assuming enjoyment as a done deal. But Laughter in Paradise is highly enjoyable and frequently very funny, and further evidence of Michael Pertwee’s credentials as one of British cinema’s best comic writers of that period. 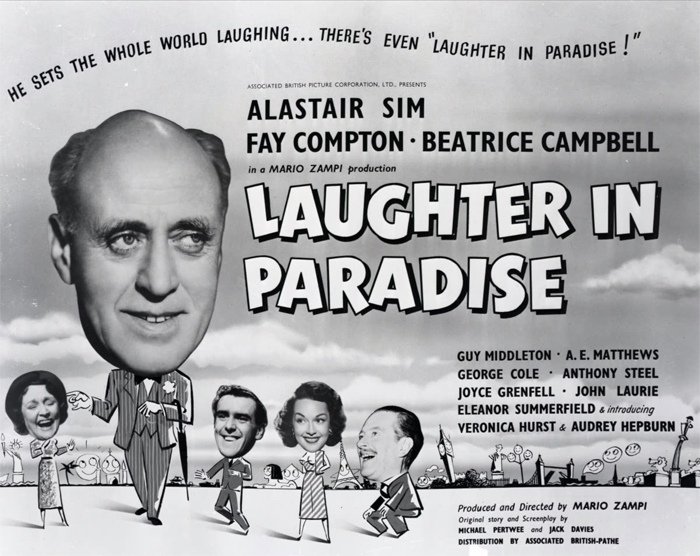