He’ll regret it to his dying day, if ever he lives that long.

The John Wayne & John Ford film for those who don’t like John Wayne & John Ford films? The Quiet Man takes its cues from Ford’s earlier How Green Was My Valley in terms of, well, less Anglophile than Hibernophile and Cambrophile nostalgia respectively for past times, climes and heritage, as Wayne’s pugilist returns to his family seat and stirs up a hot bed of emotions, not least with Maureen O’Hara’s red-headed hothead. The result is a very likeable movie, for all its inculcated Oirishness and studied eccentricity.

Michaeleen: Saints preserve us, what do they feed you Irishmen on in Pittsburg?

Ford is as fast and loose as Hitchcock with his cuts between studio and location – Wayne vocally disapproved – but there’s an infectious energy to Frank Nugent’s screenplay (from a Maurice Walsh story) that clearly inspired both director and cast. Maureen O’Hara cited The Quiet Man as her favourite movie, and her incipiently apoplectic Mary Kate Danaher is an absolute delight. Most of the cast are, actually, from Barry Fitzgerald’s prerequisite local drunk Michaeleen Flynn, to Victor McLaglen’s overbearingly oafish Red Danaher (Mary Kate’s brother, somehow more than twice her age).

Red’s the source of much of the conflict owing to his taking offence at Widow Tillane – Mildred Natwick, wonderful; she’d service a similar role a few years later in The Trouble with Harry – selling the old family farm to Wayne’s Sean Thornton, a property Red had his eye on. Thus, he’s none too happy when Sean also expresses his wish to court his sister. And less happy still when he’s hoodwinked into approving the union on the basis that the Widow Tillane will reciprocate his desire to marry once the intervening woman – Mary Kate – is out of the picture (obviously, all comes right between them in the end).

Ford’s affinity for the IRA is also alive and jovially well, and the local clergy are an entirely unscrupulous bunch, preceding Father Ted by some four decades in that regard. When they aren’t approving subterfuge and betting, they’re persuading a man who forswears fighting, for entirely scrupulous moral reasons, to enter a round of fisticuffs in the name of “honour”.

Of course, it might have helped matters had Sean just been honest with Mary in the first place, told her he didn’t want a punch up with Red on the basis that he once killed a man in the ring, but there’d be no drama if movie characters acted sensibly (notably, ex-boxers feature in three Best Picture Oscar nominees in three consecutive years – this, From Here to Eternity and On the Waterfront – and two based a crucial plot point on killing a man in the ring, resolved through proving the man’s mettle by returning to the ways of violence. Hurrah for Hollywood!)

Fishwoman: Here’s a good stick, to beat the lovely lady.

Not that you aren’t fully on board with Sean giving Red what for, come the final reel. Indeed, you rather wish he’d succeeded in laying him out cold. The best part of The Quiet Man is the knowingness – because it’s Irish – with which all of this plays out. Wayne played the straight man (he said it was hard – he should have tried it more often) and a carnival of caricatures whirl affectionately around him, “A bold sinful man”. Along with a surfeit of sparkling lines.

I’ve never been overly partial to either Wayne or Ford, but the star fits this kind of role like a swaggering glove, and there’s something irresistible about the confection. It’s striking and distracting how Sean is found chain smoking throughout, though. All you can think when he first kisses Mary Kate is how she fell for the overpowering taste of stale fag ash.

Michaeleen: It’s Homeric. That’s what it is. Homeric.

The picture runs several thematic points around values, Sean having enough money to see the filthy stuff as irrelevant, and enough distaste – through killing a man for it – to have perspective on what it won’t buy. Mary Kate, in contrast, clings to the tradition and vision of the home she wants and the way she will obtain it. There are equal parts chauvinism and reactions to the same (Sean heroically drags his wayward wife five miles across town at the end, with the upshot that she cooks him supper; this doesn’t, however, come across as backward, mainly because it gives her exactly what she wants. She doesn’t even stick around for the dust up). There’s also copious celebration of inebriation and sex rites. Good, hearty values.

Michaeleen: Buttermilk? The Borgias would do better.

The Quiet Man arrived in a year lacking the most illustrious of Best Picture Oscar competition, High Noon aside. Somehow, a slightly rubbish Chuck Heston movie won. This one has gained most of the longevity, however. It likely isn’t far from anyone’s list of five most memorable Ford films, and probably comfortably in the top five of most of them. It is, basically, to repeat my introductory paragraph, very likeable. In a very The Irish R.M. blarney-kissed way. And scenically – at least, when it’s boasting the actual outdoors – it’s also rather pretty. It is thus readily evident why The Quiet Man fosters such rose-tinted reverence. 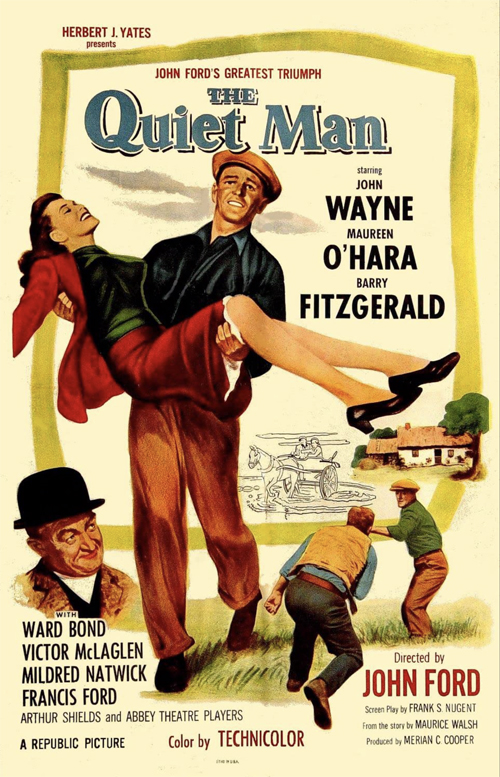