You don’t own that plane, the tax payers do!

I wasn’t a fan of this Navy recruitment reel at the time. If anything, I’m even less so now. I well recall how insanely popular Top Gun was, but I doubt if I’d have found it palatable even without the insistent effrontery of Tom Cruise’s shit-eating grin bookending each scene. This Simpson and Bruckheimer production is a studiously hollow, vacuous picture, one that attempted to make a virtue of its empty-headed machismo and consequently landed in the most zeitgeisty fashion. It’s this, rather than Wall Street, that really sums up the ’80s, because it’s this that really reflects uncomprehending audiences’ aspirations, so easily swayed were they by its materialist frivolities and cornball rhetoric.

Don Simpson and Jerry Bruckheimer – or perhaps, in retrospect, it was mostly Jerry Bruckheimer – were nothing if not canny, tapping the ad market for engineers, I mean artisans, who could bring the same kind of compelling spectacle to the big screen. Such packaging was as much about sound as vision, hence hugely popular soundtrack CDs accompanying the flashy visuals in this, Flashdance and Beverly Hills Cop.

There’s no understating the savvy of the move. It’s impossible to truly divorce the two – call it alchemy, if you like – but Tony Scott’s sheen and the Giorgio Moroder/Harold Faltermeyer synth charge are masterstrokes. Which doesn’t make the movie any less horrible, but it’s to emphasise that elsewhere, Scott would deliver the goods and then some – the trio of Last Boy Scout, True Romance and Enemy of the State particularly – and that if both Faltermeyer and Moroder fell out of fashion, their contributions to this movie remain classics. Mostly… It’s easy to see why the soundtrack was a huge hit (Danger Zone, Take My Breath Away) but some of Faltermeyer’s incidentals, notably Maverick in mourning, are quite insufferable.

Bafflingly, Chris Peachment in Time Out suggested “The story is risible, the direction routine…” One thing the direction is not is routine. It’s really quite ground breaking. War was cool again, legitimately (not just in a Nam veteran way), which was quite some doing. And Scott’s kineticism would be hugely influential, right the way through to “virtuous” war-porn horror like Saving Private Ryan. Scott made the Navy groovy and being a fighter pilot the ultimate aspirational goal.

He shot his planes backlit by the Sun and embraced his cast’s macho camaraderie to such an overpowering extent that Tarantino would later cameo in torporous love-triangle dramedy Sleep with Me, waxing lyrical about the movie’s homoerotic subtext. It’s a lot more convincing than his indulgent Like a Virgin monologue that kicks off Reservoir Dogs, in part because Top Gun is so overt, it barely qualifies as subtext or undercurrent; every opportunity to flaunt buff male bods is taken, intermittent with sparring and scoffing and complimentary come-ons. All amusingly cheesy, but not quite loveable for it, as the picture goes out of its way to horrifically over-sensationalise in almost any given aspect. Meaning any given aspect, cumulatively, becomes plain tiresome.

It isn’t surprising then, that Cruise needs to convince us he’s a passionate heterosexual; a love scene was added in reshoots as, apparently, test screenings demanded it. If not for that, even the least discerning, devoutly straight male viewer would be found intermittently tugging uneasily at his collar.

I forgot how charmlessly punchable Tom used to be. Around this time, it took Oliver Stone to bury that “quality”, and it would loosely be another decade before he’d begin working actively against it. He’s a thoroughly obnoxious little shit in Top Gun. This was far from his breakout role – that would be Risky Business – but it’s definitely the one that made him a brand (curious to look back and note that, rather than capitalise on his 1983 hits, he dived into a huge and time-consuming bomb for Tony’s brother, so there was a three-year gap between Business and this, his next hit. Something not dissimilar happened after the double of Mission: Impossible and Jerry Maguire, as he entered the quagmire of Eyes Wide Shut).

I’m far from the only one who found Cruise intolerable during this period. Bart Mills referred to Maverick as a “nasty little mirror-watching puke” in the Film Yearbook Vol 6, while Peachmant, who liked the movie, termed him “an arrogant piece of Officer Material”. It’s particularly unconscionable that everyone is constantly showering Pete Mitchell’s obnoxious behaviour with compliments, even if not to his face. They all find him irresistible in his cocksure majesty, and anyone would be his wingman, young or old. Even Strickland, I mean Stinger (James Tolkan in the back-to-back biggest movies of consecutive years).

Maverick’s a legend, a myth, not least to nemesis/lover Iceman (“I heard about you. You like to work alone”; “It’s not your flying. It’s your attitude”). “Gutsiest move I ever saw, man” says a former denier after Maverick is admonished for dangerous flying. If even Michael frickin’ Ironside adores Maverick, you know no one will stand up to him. Tom Skerritt’s a pushover (“And if you don’t, give me a call. I’ll fly with you”). All these seasoned veterans give the little sex pest far more rope than he deserves.

It remains perplexing why would Kelly McGillis’ Charlie Blackwood thinks him hot stuff. I mean, sure, she’s playing a fantasy civilian astrophysicist Navy advisor, but that half-decade age gap may as well be a quarter of a century, between his adolescent insistence and her straight-up adult (McGillis is not back for the sequel, but then she isn’t spending her sixties attempting to be thirty). When Maverick and Goose (Anthony Edwards) serenade Charlie in a bar, she seems to consider it flattering, rather than cause to break a bottle over his head. And if she initially mocks him perceptively (“Maverick? Does your mother not like you or something?”), she soon changes her tune, wowed by his manly manoeuvring: “So you’re the one”, on realising he was “in a 4G negative dive with a MIG 28”.

There’s a reason Tom doesn’t need to play a superhero: Maverick’s Batman! A Batman who needs to wear lifts or have McGillis standing in a trench so she doesn’t tower over him. Charlie doesn’t press charges for Maverick pursuing him into the ladies and hassling him. Instead she engages in steamy rumpo and drapes herself over his bike.

Of course, it can’t all be plain sailing. There need to be some facile demons for Maverick to overcome, as well as a nameless enemy to blow out of the sky (you have to justify the armed forces, so if all else fails, create a threat. Scratch that, if all else doesn’t, fail create a threat. Hegelianism in full effect). So he has a dad who was a pilot to live up to (Skerritt’s Viper Metcalf flew with his old man). And he needs to learn to be cocky and responsible, so Iceman will be his wingman, and for that he needs chastening death.

Pauline Kael’s review referred to Tom as a “nautilized, dinky thing” which is hilarious. He must have loved that. She also suggested “Top Gun is a recruiting poster that isn’t concerned with recruiting but with being a poster”. Which is an excellent call.

It’s notable how many budding actors turned Top Gun down for glorifying war (Matthew Modine among them, who was making the likes of Birdy and Full Metal Jacket around his time). There are few of the mooted names you could imagine making it a hit the way Cruise’s presence does, though. Tom has none of their moral qualms, something that ought to be evident from his subsequent career.

You might think one religiously inclined – particularly towards a religion that saw its founder demobbed due to alleged infirmities – would be a little less enthusiastic. But as documented by Matthew Alford in Reel Power, Cruise has said Bush’s policies were “solid” and “rooted in reality”. Presumably, the reality of a mask-wearing, spleen-venting-on-hapless-crew, plandemic-touting, couch-jumping scientologist. He also met with the CIA to discuss positive presentation in Mission: Impossible III. Plus, he still plans to make a movie in space (yeah – ha-ha-ha, him and Elon’s car both). Tom is fully on board with the Elite agenda. The only variable is how long they want him in their boat.

However keen Tom is, Bruckheimer is even more so. One suspects he’s mostly just a shrewd businessman, having made a slew of Department of Defence-assisted movies (Top Gun, Pearl Harbour, Black Hawk Down) and “contributed financially to George W Bush and John McCain…” Top Gun, famously, was a major boon to the Navy and “helped with recruiting like crazy” (there were 500 percent more applicants in its wake). This may all sound peachy, but more serious-minded military men weren’t so enthused with the way it “fuelled misconceptions on the part of junior officers of what was expected of them and served to… glorify naval pilots in the eyes of many young women”. Rear Admiral Alan “Boot” Hill attested that “young aviators at Miramar Naval Air Station began strutting around believing they actually were Tom Cruise” with “carloads of women” showing up. Yep, that sounds like the ’80s.

Interesting to be reminded of who else shows up here. It’s the first sighting of cute-as-a-button Meg Ryan. Playing a hick, which I didn’t recall. It’s weird seeing Edwards with hair. Tim Robbins is there (Merlin), and apparently, he isn’t too tall to be a pilot (he’s right on the edge at 6 feet 5 inches). Adrian Pasdar was about not to hit it big with Near Dark, and John Stockwell hadn’t yet decided directing was where his bag was at.

You won’t find mention of this on the Wiki page, but Alford documents how plans for a sequel were initially floated only half a decade after the original. Alas, they were “reportedly ditched… when hundreds of Navy pilots hit the front pages for allegedly molesting and mauling 87 women at the Navy’s Tailhook Association annual convention”. Surely par for the course, but more than enough bad publicity simply is bad publicity. Despite my antipathy towards Top Gun, I am intrigued to see the sequel. Not because I feel the need for speed – real Top Gun, according to IMDB, so not necessarily cited, fines anyone quoting the movie – but because Joseph Kosinski can capture vistas like no other. I might be able to endure a modicum of indigestible jingoistic militaristic fervour if it looks nice. Besides, the forces could use all the good publicity they can get right now. 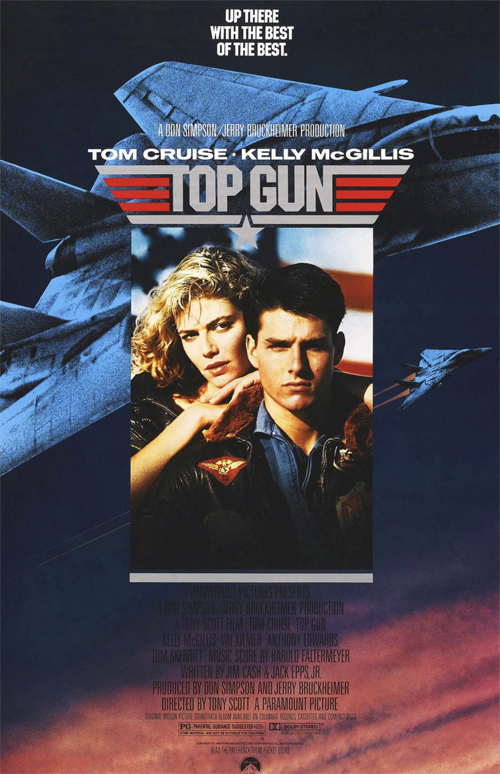 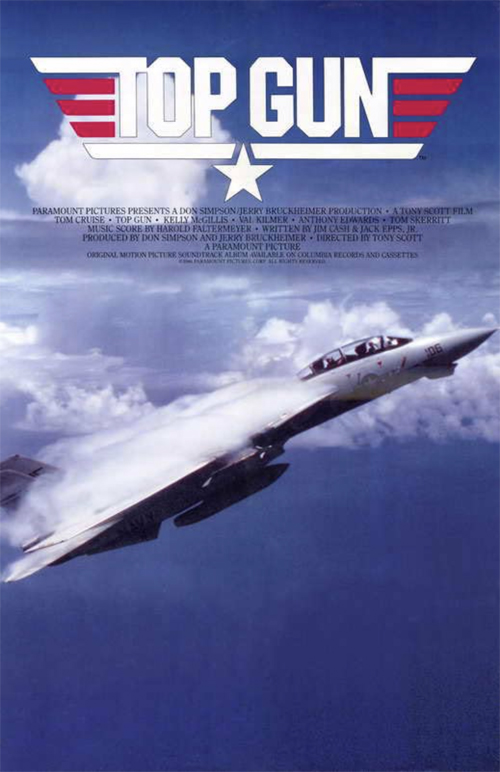 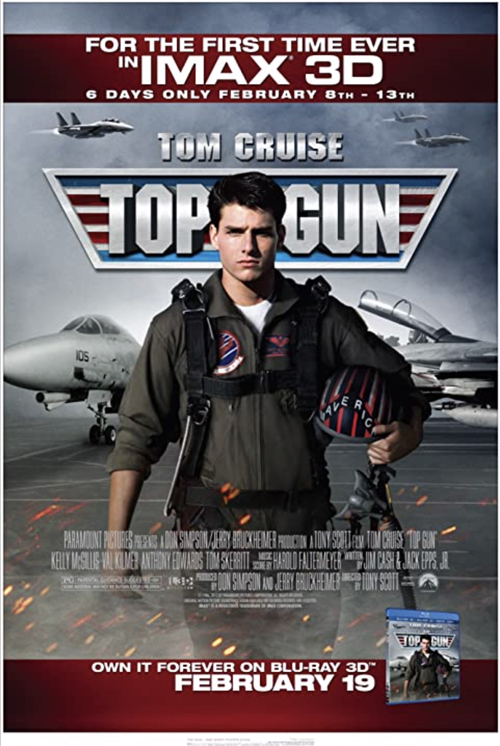