What do you think you’re running? A country club for lions?

Copious quantities of humans were harmed in the making of this movie. Roar is an extraordinary achievement. If you want to put it that way. An act of a deranged mind. Of lunacy. The tale never learned of assuming a wild, vicious animal is going to be nice to you. Which it may well be. Until it isn’t (unless, of course, you’re Anastasia of the Ringing Cedars). The making-of documentary from a few years back (Roar: The Most Dangerous Movie Ever Made) even flaunted the picture’s gory excesses in its poster campaign, revelling in the gruesome gashes, mauls, scars and scalpings inflicted by Noel Marshall’s precious pets. It goes without saying that Roar isn’t much of a movie, barely even scraping together a narrative, but it’s beyond fascinating in its unhinged intent and protracted perseverance.

Roar was in production for more than a decade, and filming itself took five years. Forty acres of Californian desert were turned into Marshall’s “playground”, in order to explore his “dream that humans and big cats could live together”. However, there were zero safety precautions – it was a non-union shoot – and Marshall’s son John, also cast in the movie and fulfilling numerous set roles including amateur vet, observed “It was shocking beyond belief that no one died”.

Cast and crew came close, though. Cinematographer Jan de Bont, the only professional crewmember present, got himself scalped in the third week of filming and needed 220 stitches. Noel was bitten through the hand (suffering arterial bleeding), and later on the back of the leg (experiencing blood poisoning so severe that amputation was considered); both of these incidents can be seen in the finished movie, the former requiring no augmented stage blood. John was bitten in the head and needed 56 stitches. Marshall’s wife Tippi Hedren was co-starring, as was her daughter Melanie Griffith. The latter required plastic surgery after her face was clawed. Hedren’s ankle was broken when an elephant lift didn’t go as planned. Assistant director Doron Kauper was mauled in the throat in a bout of cat savagery that was possibly the nearest to a fatality of numerous life-threatening ones.

And no animals were harmed… well, unless you include the two tigers and star lion shot by deputy sheriffs after the set flooded. And numerous other cats who died from illnesses. 150 big cats were collected and “trained” by Marshall and his family. It’s amazing all this was permitted in California. There are non-union shoots and there’s… Roar. The underlying message was ironically one of the preservation of African wildlife, hence the farcically amateur “poachers” subplot.

Hedren has, of course, gone on to devotion to the cause via the Shambala Preserve and activism against the ownership of wild animals; she was uninterested in returning to the subject when the doc was made, since Roar represents everything she stands against now. Noel and Hedren were married at the time; they separated within a year of production completing, and the odd opening conversation between Hedren and Griffith, the latter suggesting the former has no sex life with her father, and that this may be the key to their estrangement, is a curious pointer to discontent; in the movie, cat trauma ultimately brings the couple together, of course.

John noted of de Bont’s involvement “He doesn’t want to revisit this. Nobody wants to revisit it”. Griffith is still traumatised, apparently. On the other hand, he is very cheerful and upbeat in the doc’s reminiscences. Younger brother Jerry much less so, clearly overcome with grief when recounting the flood that led to the deaths of three cats (and star lion Robbie in particular). Noel’s recklessness clearly knew no bounds. Would anyone sane cover his wife’s face with honey to have a leopard lick it clean? John notes of the safe words that his father would ignore them if it suited him, especially for Griffith, who dropped out of the movie at one point: “Both Tippi and Melanie would try to be in scenes with me because they knew I could stand up to Dad, but they also know I would make sure they wouldn’t get hurt”.

Fascinating as all this is, as a dramatic movie, Roar is woeful. And yet, it’s also compelling, simply by virtue of the deranged “stunts” being pulled. The slender premise finds Noel’s naturalist Hank running a preserve in Tanzania. He becomes distracted from collecting his family – oblivious to his activities and animal associations, it seems – at the airport. So while they end up at his house and are duly besieged by “playful” cats in a kind of inverted home invasion, Hank must overcome obstacles to get reach them (a flat tire!) And then there’s the rogue committee members hunting down his cats. The opening crawl informs us that, because untrained animals formed the backbone to the movie, “they share the writing and directing credits”. You can believe as much.

Roar is a simultaneously excruciating and nerve-wracking experience. You’re fully aware none of this should be happening, let alone being filmed for a movie. Occasionally, there’s a splendid sight (a giraffe racing past a motorbike), but you’re mostly just stunned at the proceedings. Aside from the traumas visited, the most amazing thing is perhaps how deaf it was to any concept of a target audience (did Hedren really think it would gross more than $100m?) Which explains, to an extent, why Roar was sold, by turns, as a thriller, a family adventure, and a “ferocious comedy”.

“It’s just like life. You get the funny with the tragic” Noel tells Mativo (Kyalo Mativo), desperately trying to assure him – and himself, presumably – “They’re just playing, I’m telling you” and dismissing a mass mauling with “All you’ve got’s a few scratches”. When the family are first being corralled by a company of oversized felines, who have brought in some zebra snacks, Hedren utters “Oh God, look what the cat dragged in”. Baffling. Later, when the evil committee members are savaged for their wanton tiger slaughter, the odd arm is gleefully ripped off. Who was supposed to be watching this thing?

I recall half-page comic strip ads for the movie in DC Thomson comics at the time (to compare, similar promotions were run for Clash of the Titans). Blue Peter did a feature. What trauma awaited the nation’s unsuspecting nippers? One thing’s for sure, you’ll come away persuaded big cats are insanely dangerous and have no business sharing any common territory with humans.

Roar cost about $17m ($50m today) and it seems Marshall, in his hubris, refused a US release (because they’d take all the profits). As a result, the movie’s said to have made about $2m. I found it on YouTube (where you can also see an out-of-synch version of the documentary). Perhaps Roar would be ripe for one of Disney’s “live-action” remakes. Composer Terence P Minogue’s Nchi Ya Nani? (Whose Land Is This) would certainly fit right in with The Lion King. Noel Marshall was able to fund the feature partly through profits from The Exorcist, on which he served as executive producer. I’m unsure which picture is the more shocking. 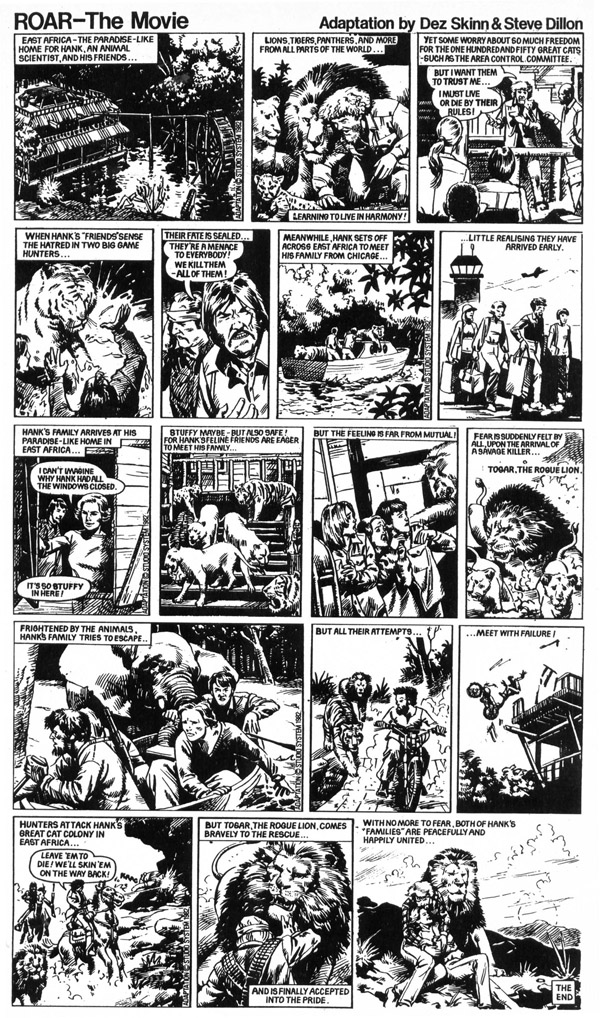 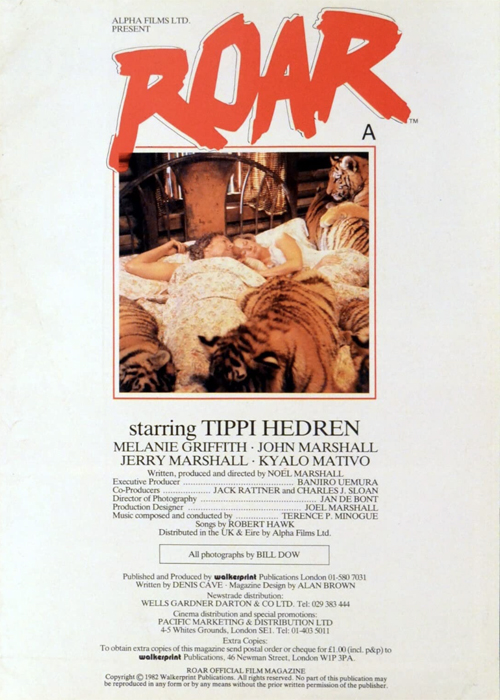