Ironically, for a director who has made his career whoring himself to the music industry – furnishing videos for such Illuminati stooges as Madonna, Jay Z, Taylor Swift, Beyoncé, Justin Timberlake and the Jackson siblings – it’s Mark Romanek’s first movie that he sees fit to disinherit. He’s much better known for his subsequent – infrequent – pictures One Hour Photo and the vastly overrated Never Let Me Go (clones as a metaphor for the Elite feeding off the general populace?) than Static, but it’s perhaps his youthful naivety, before he became enslaved to the Beast, that makes it his most interesting feature.

Which isn’t to suggest Romanek is other than very talented, but dedicating his gifts so overpoweringly and concertedly to the cause of his masters is a bit of a choker. He’s known for embracing transgressive/decadent/occult imagery going way back, in such videos as Hurt (Johnny Cash), Criminal (Fiona Apple) and Closer (NiN). Romanek started out trailing Brian De Palma on Home Movies, where he met and struck up a friendship with Keith Gordon. Who is now a prolific TV director, of course, his career taking in the likes of Dexter, The Leftovers, Fargo and Homeland. And a smattering of features too (A Midnight Clear and The Singing Detective among them). Together, they cooked up Static, with Gordon starring as a relatively balanced guy by his recent (Christine) standards – so only relatively, mind – despite a penchant for arranging warped crucifixes on his wall (which he has stolen from his job at a crucifix factory, a job he has just lost).

That’s merely an incidental to Ernie Blick’s main malaise, however. Ernie is “onto something big… huge”. It’s the “culmination of two years of nearly continuous work”, and he’s about to announce it to the world. Even before he does, there are bets on this minor local celebrity’s invention (a “new laser weapon or something”), with those closest – Bob Gunton’s evangelical cousin Frank and Lily Knight’s waitress Patty – expecting his big idea will come to nothing. “One day, he just started talking about changing the world” Patty tells Amanda Plummer’s Julia; she’s jealous of Ernie’s returning old flame (they were like twins together, we learn, which may explain Plummer’s expert androgyny).

It isn’t coincidental in locals’ minds that Ernie has been working on his invention ever since his parents died in an auto accident (“The insurance paid off big, though, right Ernie?”) Ernie has no concerns, however, because he knows it works. He has seen it. It will “change the way people think about themselves” People will see things the way they really are: “After today, people will be happy, and not sad”. Ernie’s big discovery? It’s “a television… that can tune in to heaven”. The only problem is, at the unveiling, the only one seeing a higher realm and not static is Ernie himself.

The temptation is to view Ernie as a deluded loon, but by what yardstick? Julia returns to town after walking off stage mid-gig, and there are mutterings that she may be mad. Frank is insanely obsessed with Armageddon (as most of us poor saps were in the ’80s, sold the nuke lie wholesale). Gunton, best known as The Shawshank Redemption’s warden, is convinced of the imminent “total annihilation of life as we know it”, which means it’s time to “Let Je-sus into your hearts, and you can be a winner in WWIII!” Frank has weapons hanging from the wall, supplies for the end and hazmat suits for the wife and kids (“Radiation death is an ugly thing”).

There’s also Ernie’s response when his unveiling – on an Arizona Christmas Eve – turns out to be a damp squib. He hijacks a bus to Albuquerque but entirely with the support and cajoling of the elderly passengers aboard, inspired as they are into action through enthusiasm for his invention.

Static appears to be heading somewhere, but the offbeat escalation of the situation – Ernie wants the Press to hear his idea, so mirroring an earlier fantasy sequence – suddenly concludes when the besieging police open fire and the bus explodes, killing all aboard. If it seems random – as if Romanek and Gordon are summoning the spirit of Goddard circa Pierrot le Fou – it’s nevertheless germane to the core concept; the movie concludes with Julia gazing into the static screen before heading off once more, a wistful smile on her face. Has she seen Ernie in heaven? Is it grief that enables one to attune to the device’s images? Or are both Ernie and Julia just bonkers?

There’s another possibility, of course. That the punctuation of the ending is Romanek and Gordon flirting with nihilism, setting the scene for the unhinged protagonist movies that follow (Donnie Darko, Fight Club) and violence spawned by the stark bleakness of the desert environment (Breaking Bad, White of the Eye).

But the picture is too quirky – probably the part Romanek wants to distance himself from most of all – to feel as if it has descended into abject gloom. At times, there’s an almost Lynchian vibe (Frank’s kids dancing around in lizard masks). At others, Alex Cox’s Repo Man comes to mind. And throughout, one can see the promo director Romanek would become. The soundtrack is a welter of notable tunes, from the likes of Elvis (Blue Christmas), Johnny Cash (Ring of Fire) and The The, but it’s the more synthy choices that really set the tone, with Brian Eno (Weightless), OMD (Sealand) and especially Japan’s magnificent The Experience of Swimming pushing Static from nuthatch into inspirational SF territory.

Romanek had this to say about Static: “For me it seemed premature. Like I had an opportunity to make a film before I felt I had much to say or knew what I was really doing as a filmmaker, so I just find it this sort of embarrassing bit of juvenilia. I find it is embarrassing, but I know that some people connected with it and I don’t mean to discount that fact. I just wish it would go away…”

Well, it’s on YouTube at the moment, so it isn’t going away, Mark. Perhaps he doesn’t like it because it even invokes the idea of heaven, something as anathema to him as Joe Johnston’s eventual interpretation of his The Wolfman. I hadn’t seen Static since the ’80s, and I’m pleased to report that much of its oddball charm has survived intact. Perhaps more successful moviemakers should embrace such pseudy juvenilia. Growing up tends to be the death of aspiration and inspiration. Reality takes over. Doing what the Elite tell you. Feeding the youngsters subliminal messaging through a heady diet of music videos. Attaboy, Mark. 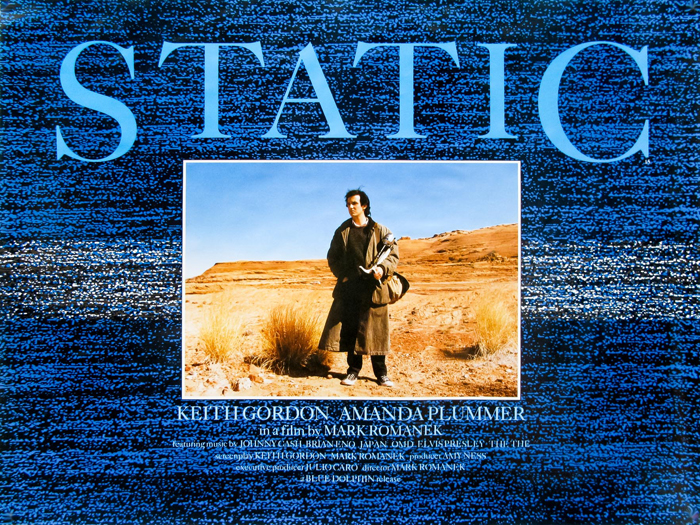