If only every Disney princess movie were this good. Of course, Roman Holiday lacks the prerequisite happily ever after. But then again, neither could it be said to end on an entirely downbeat note (that the mooted sequel never happened would be unthinkable today). William Wyler’s movie is hugely charming. Audrey Hepburn is utterly enchanting. The Rome scenery is perfectly romantic. And – now this is a surprise – Gregory Peck is really very likeable, managing to loosen up just enough that you root for these two and their unlikely canoodle.

Even the sting in the tail – Peck’s journalist Joe Bradley is exploiting their day together in order to get a story on her incognito Princess Ann – is dealt with in a warm and unsensational manner. Ann, or Smitty as she is dubbed, has had enough of the strictures of her daily routine and makes off into the Rome night, almost immediately – and highly conveniently given his profession – falling (asleep, due to a sedative) into the lap of Joe. When he realises who she is, he quickly secures a deal for a story (“The private and secret longings of a princess”). Then he inveigles photographer pal Irving (Eddie Albert) to aid and assist. Ann buys comfortable shoes, has a haircut, smokes her very first cigarette, commandeers a runaway Vespa, visits the Colosseum and puts her hand in the Mouth of Truth. And, when the plain-clothes agents sent to find Ann catch up with her at a bar and a full-on fight breaks out, she utilises a guitar to potently pugilistic effect.

It’s a very innocent vision of royalty – a fantasy one, even. Of decent, genuine, put-upon individuals doing only what their regal duties permit and longing to break away for an hour or two. No nasty ritual sacrifices, hybrid bloodlines or rigorous inbreeding. That we’re privy too, anyway. When Ann returns to her retinue, she has new agency (“Were I not completely aware of my duty… I would not have come back tonight or ever again”). Journalism is also treated with kid gloves, as both Joe and Irving opt to do the right thing and give the incriminating photos to Ann rather than pass them on to boss Hennessy (Hartley Power) for the ultimate scoop.

Wyler might not have been known for his light touch, but I suspect that helps the picture sustain its breezy charm. He scrupulously avoids getting in the way or overplaying the comedy and so lets the actors, the screenplay (which Dalton Trumbo wrote while blacklisted, Ian McLellan Hunter acting as front man), and the enticing locations do the talking. Someone else might have over-cranked the engine, but with the radiant Hepburn supported by the gently amused Peck, while Albert provides the laughs, Roman Holiday works like a dream.

It’s tempting to suggest, Hepburn’s allure being what it is, that anybody could have served in the Joe role, particularly if her smile could melt someone as severe as Peck generally was (Cary Grant was first approached when Frank Capra tried to make it with Elizabeth Taylor in the late-40s). But I think Peck’s natural reserve and oakishness result in the perfect balancing act. It also makes the ending, where both return to their former ways of life, seem stoically natural rather than a downer.

The adjective elfin was, of course, made for Hepburn, who sounds surprisingly like Joan Greenwood when in her regal pose. She makes the contrasts of someone steeped in pomp and ceremony, who’d like to wear pyjamas or “sleep with absolutely nothing on at all” seem entirely natural (or naturelle) and empathetic. She tells Joe she ran away from school and he tells her he sells fertiliser, while Irving snaps her picture with a secret miniature cigarette lighter. Both are liars, but his liar is the unscrupulous one, which is why his apology needs to be pronounced. That scene, played out during a royal interview, is positioned through subtlety and reaction rather than overstatement.

The romantic comedy is an easy genre to deliver on autopilot but a difficult one to do really well. Often, it’s down to alchemy – for me, the not dissimilar in set-up Notting Hill never quite works, at least in part because Julia Roberts is no Audrey Hepburn – and is thus an indefinable the Academy rarely recognises. Roman Holiday did well to be nominated for Best Picture from that perspective, and I might even go further and suggest it should have won. 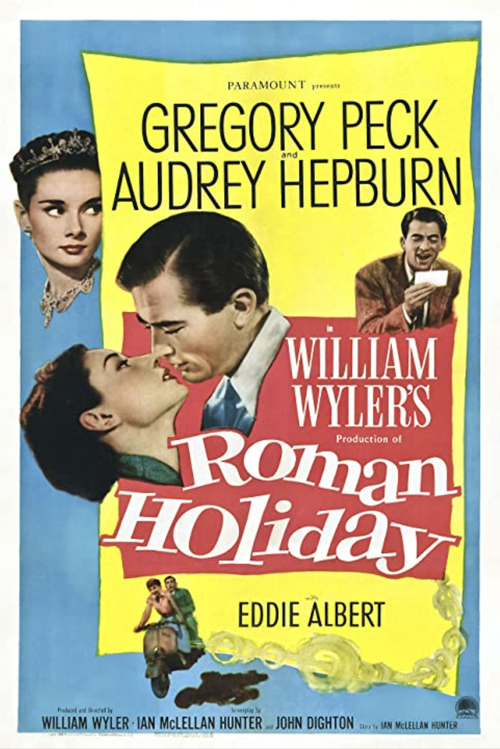