I’m a bagel. I’m a plateful of onion rolls.

Some movies lend themselves to instantly facile, derogatory retitling. The Un-Talented Mr Ripley. And this drudge of a musical that saw Barbra Streisand alight on the big screen like an egg-bound duck. Perhaps it takes a Babs fan to see her movies as the produce of golden geese; I’ll own up to having some catching up to do in order to offer a fair appraisal. Perhaps, if Streisand’s your cup of tea, Funny Girl just flies by. Perhaps, to everyone else, this, the most popular film of its year in the US, is endlessly turgid dross, all two-and-a-half hours of it.

I don’t put this down to a lack of appreciation for musicals, since for the most part, Funny Girl barely resembles one. Long stretches go by without the whiff of a song, and when there is one, it’s largely an intimately staged piece of ho-hum. Indeed, I’m mystified the movie reportedly cost half as much again as Oliver! Whatever you can say about the latter, it’s all up there on screen. All Funny Girl leaves you with is a sense of half-hearted period drabness.

But again, perhaps the “wow” factor of Streisand was everything. Funny Girl was her movie debut, and she’d achieved huge fame as well as awards with the stage version (originally conceived for the screen). There was evidently an appetite for her, not only from audiences but also from critics and the Academy (a stark contrast to Julie Andrews being snubbed when it came to My Fair Lady’s cinema incarnation).

Hollywood’s ’60s love affair with the musical has been cited as a bigger, better, more colourful means of competing with television’s inexorable pull on audiences, and bagging Babs must have seemed like a no-brainer to that end. As told by The Secret History of the Academy Awards, there was some discontent that Streisand was invited to join the Academy’s ranks before she had even made a movie, making it sound almost a fait accompli that she should go on to win Best Actress Oscar (which turned out to be an unusual tie, with Katherine Hepburn for The Lion in Winter). Famed costume designer Edith Head reacted to Streisand’s outfit, comprising see-through, bell-bottom pyjamas, with the succinct “Shocking!”

But everyone was rabid for Streisand, bleh-outfits or not; there was even some inkling of recognition that, beyond her luminary presence, Funny Girl wasn’t all that. Kael gushed all over her, claiming she arrived on screen “when the movies are desperately in need of her”. But she also referred to William Wyler as a “good, solid director” for the project. Which sounds more like an assessment of the nutritious content of porridge than acumen for the musical genre.

Roger Ebert was similarly smitten with the star and less enthused by the material. Sidney Lumet had been attached before Wyler, falling out due to disagreements with star and producer Ray Stark. He’d go on to his musical moment of, er, majesty with overblown bomb The Wiz. Wyler had scored as big as they got with Ben-Hur almost a decade prior, but he hadn’t attempted musicals hitherto either. Later asked if Streisand was hard to work with, he responded “No, not too hard, considering it was the first movie she ever directed”.

I knew nothing of Fanny Brice or Ziegfeld Follies prior to the picture, beyond the latter being a revue. Nothing much is really needed in advance, though, to recognise the gist: ugly duckling makes a name for herself, falling for a dashing man who isn’t perhaps as amazing as all that after all. Why, that almost sounds like… A Star is Born. You know, with Streisand still trying to mine the notion of her unlikely stardom nearly a decade later. And audiences were still buying it.

The first half hour of Funny Girl is fine enough in that regard, with Fanny revealed as an effortlessly funny and unlikely contrast to the Ziegfield girls. The slapstick stage routines are well staged and genuinely amusing, be it Fanny causing havoc on roller skates or shocking Walter Pidgeon’s Florenz Ziegfield by performing a finale “pregnant”, to audience ecstasy.

But then Funny Girl sinks like a stone. Omar Sharif, one of the most boring actors ever – Doctor Zhivago succeeds in spite of him – arrives as Fanny’s gambler admirer Nicky Arnstein, and every scene between them is dramatic sludge (not even good, solid sludge). Fanny goes from strength to strength and has a sprog, while Nicky gets more and more in debt. And there are a few songs littered along the way. A way that just goes on and on and on.

Wyler treats Funny Girl like a serious movie when there aren’t any songs, but it lacks the spark or momentum to sustain such pretensions. Funny Girl isn’t terrible, but it’s inert. Like porridge. Perhaps audiences secretly thought so too. Or some of them. Streisand’s musical follow-up, Hello, Dolly! really was a grand extravaganza, and its lack of proportionate success helped put the temporary nail in the coffin of the form. 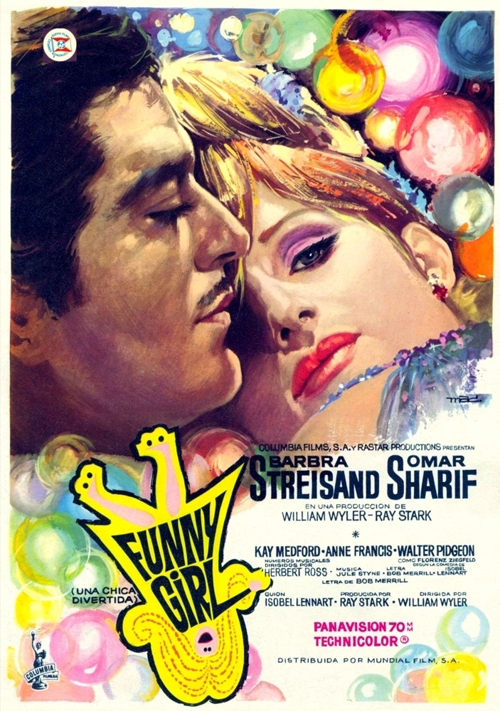