Any book – especially a Young Adult science-fiction novel – titled The Knife of Never Letting Go is just asking to be dismissed out of hand as pretentious twaddle. Whether or not the subtitle would have seriously worsened Chaos Walking’s chances of success is now moot, of course. While the YA phase peaked nearly a decade ago now, Hollywood is still willing to take a punt, hopeful that something might somehow break out. Hence this, featuring Spidey (popular) and the Amazing Wonder Rey (less so). And a disastrous production schedule that would have any right-minded exec dubious about giving its director the nod to shoot a Tom Cruise action movie in space… assuming, of course, said space wasn’t entirely green screen masquerading as space. You know, like all the footage of space we ever see.

There isn’t much chance now of the other books in Patrick Ness’ Chaos Walking trilogy getting adapted, even without the mess the adaptation made of the first novel’s structure. Lionsgate (and Summit), who hit a goldmine with their first few YAs (Twilight, The Hunger Games) and then not so much (Ender’s Game, Divergent not even reaching a final instalment due to consummate greed and taking an audience for granted), snapped up the rights in 2011. Charlie Kaufman (shockingly) delivered a draft in 2012. He was subsequently rewritten by various parties before Christopher Ford and Ness arrived at the final credit (possibly rather ignominiously for the latter).

The movie entered production in 2017, and the assembly was deemed a disaster – as Doug Liman initial cuts often are – before reconvening in 2019 with no one’s maestro Fede Álvarez overseeing copious reshoots, including a new final act. Which is easily the least successful part of the movie, generically located around a crashed space ship and seeing the inspiringly cast Mads Mikkelsen, in the entirely atypical role of the villainous mayor David Prentiss, stalking Tom Holland’s Todd as the latter attempts to protect Daisy Ridley’s space girl Viola.

Ness’ premise, of (Earth) colonists stricken by a mysterious affliction, the Noise, is at least a reasonably original one; all the menfolk have gone down with it, and it leaves them unable – mostly, anyway – to hide their thoughts from each other. The women? All dead. Murdered by the predatory CGI alien bipeds the Spackle. Which sounds a bit insensitive, as names go (they’re also called Spacks in novel, which is even worse).

Inevitably, the source material having woke cachet in advance of the woke movement itself yet through divine providence coming out now, at the height of woke, the cause of the absence of women is not the poor maligned CGI aliens, but men. You know, males. They’re the worst. Incensed that women could hide their thoughts, it turns out they went on a bloody culling rampage.

In fairness, they aren’t all white hetero CIS-gendered males. There’s David Oyelowo’s possessed preacher, who seems to have suffered some slashed subplots and unforgivably kills Todd’s dog Manchee (if you want your movie to stand a chance with audiences, never ever kill a beloved pooch). And who rather ridiculously is struck by the final realisation “I couldn’t tell the voice of God from the Noise”. Then there are Todd’s parents, Ben (Demián Bichir) and Cillian (Kurt Sutter of Anarchy), who as a gay couple unsympathetic towards Prentiss’ actions and rule have nevertheless remained silent and therefore dubiously complicit. If Chaos Walking is in any way radical, it’s saying no men, no matter their creed or orientation, are any good.

Lest you assume Chaos Woking is the stuff Kathleen Kennedy would dream of, and possibly build a small altar to, however, it’s very evident that Todd is the focus, with Viola in the objectified heroine role. She’s very capable, naturally, but not quite enough to accuse Ridley of serial Mary Sue-ing. She rides a bike really fast through the forest (like Leia in Return of the Jedi), and overpowers a guy just when you think Todd will need to save her. She also pushes Prentiss off a precipice for no other reason than it must have occurred to those in charge of the reshoots that the girl needed the most proactive climactic action. This is, however, after her exclaiming “Todd, stop! Don’t kill the CGI thing” and reprimanding him with “So your solution to everything is just to kill”. What like no other solution he’s had, you mean?

In fact, Viola’s surprisingly lacking in agency or distinction, which rather leaves you assessing how considerably lacking Ridley is in screen presence. This isn’t helped any by her blonde drag act, which makes her Look like Pamela Anderson playing Janet Street-Porter in Not the Nine O’Clock News. And about eighty. She has less teeth than Keira but is also less winning.

Holland, in contrast, can’t help but be likeable. So tiny, he could probably fit in Daisy’s pocket, but likeable. I dare say he’ll even be likeable as the horrifically miscast Nathan Drake. Chaos Walking delivers a notably similar premise of outsider young male on an oddball “Earth” setting with a pet pooch and impossible idealisation of his dream girl as Love and Monsters. But that Netflix offering keeps things light and fizzy. Chaos Walking only really has the conceit of hearing thoughts to keep the interest going.

To be fair, though, I did find it quite engrossing, and it’s an effective suspense tool at points too, since it’s almost impossible to keep quiet with it. But it’s also painfully obvious that none of these overheard thoughts and images relate to reality. The feistiest Todd’s subconscious gets in Viola’s presence is a “Kiss me”; let’s face it, any coherent rendering of this idea would have her running a mile as soon as she encountered a man – including nice, benign and eternally boyish Todd – what with every one of them thinking incessantly about her in a sexually compulsive Tourette’s syndrome kind of way.

Doug – and Fede, I guess – does largely succeed in depicting this strictly PG-13 open-thoughts milieu, though, even as it’s rather subsumed thematically by the sub-Fury Road wokeness baggage of evil men vs virtuous women (“Oh my God, the mayor’s a woman” blurts Todd of Cynthia Erivo – shortly to be the Blue Fairy in Robert Zemeckis’ Pinocchio: I know). Todd’s journey is to learn that women are bestest evah. Why, he even draws on the image of their suffering to defeat Prentiss.

Elsewhere, Liman limbers up for “space” with some weightless scenes actually shot up there (as in, as “actually” as the “actual” shoot with Cruise will be. Actually). One is also given to speculate the reasons for dropping the novels’ taught tale, that the Noise was a Spackle-created germ that killed the women (the read through would be that virus theory is a lie, obviously not something to be publicising in the middle of a plandemic). Although, in the novel, the Noise is in fact a “natural contagion”, it seems. Perhaps space contagions work differently to Earth ones.

One can’t help think more could have been done with the possibilities of the Noise. Prentiss is able to manipulate others (“I am the circle, and the circle is one”) and conjure images, something Todd – in a Force-like way – has some uncontrolled ability with too. But to double down on this, a particularly male magical skill, would rather be to rebuke the direction in which Hollywood is now headed full throttle, audience approval be damned.

What is very clear, though, is that Chaos Walking is another DOA picture – its fate sealed by critics and audiences alike before its release – that isn’t nearly the disaster you’re expecting. It’s quite watchable, and if the dynamics and characterisation tend to the generic, its gimmick holds the attention. Shouldn’t have killed the dog, though. 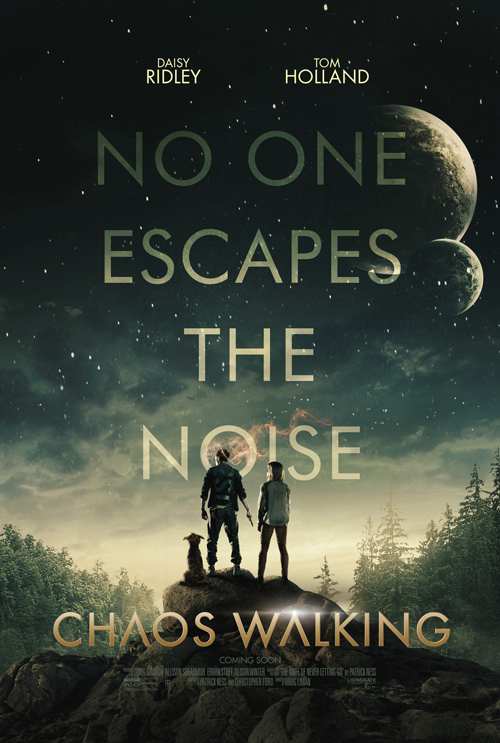