To our glorious defeat.

I’d quite forgotten Peter Sellers essayed multiple roles in a movie satirising the nuclear option prior to Dr. Strangelove. Possibly because, while its premise is memorable, The Mouse that Roared isn’t, very. I was never overly impressed, much preferring the sequel that landed (or took off) four years later – sans Sellers – and this revisit confirms that take. The movie appears to pride itself on faux-Passport to Pimlico Ealing eccentricity, but forgets to bring the requisite laughs along too, or the indelible characters. It isn’t objectionable, just faintly dull.

US Defence Secretary: Do you want it recorded in history that a nation of our size attacked the smallest country in the world?

The Mouse that Roared was adapted from a 1955 novel by prolific Irish novelist Leonard Wibberley (churning out as many as three books a year, once he started). The first of five lightly satirical Grand Fenwick novels, this one spoofed the arms race and, in particular, the nuclear one. The premise, however, derived from the aid Japan received following the US peace treaty. Wibberley initially had Ireland invading the US, but then invented the Duchy of Grand Fenwick as a bankrupt nation scheming to hit it big; they would be betting on a similar shedload of funds flooding in to rehabilitate their country, following a swift defeat by the vastly larger nation (Fenwick is “the smallest country on the face of the globe” at fifteen and three-quarter square miles).

Rupert Mountjoy: The Americans forgive everything. There isn’t a more profitable undertaking for a country than to declare war on the United States and be defeated.

Roger MacDougall (The Man in the White Suit) and Stanley Mann (later of A High Wind in Jamaica, Damien: Omen II and Conan the Destroyer) penned the screenplay, and Jack Arnold, best known for his science-fiction fare during that decade, was the curious choice for director. Perhaps he came at the behest of Columbia (whose logo is lightly mocked at the opening, with the statue stepping off her plinth), and it was felt an American eye leading the invasion of the US was appropriate. Certainly, he wasn’t known as a comedy guy, and I think that comes across.

Narrator: Ladies and gentlemen, this is not the end of our film. However, something very much like this could happen at any moment. We just thought we ought to prepare you and more or less put you in the mood.

Rupert Mountjoy: My idea was sound. Only an idiot could have won this war, and he did.

Taking up the nuclear football – or Q Bomb – may not be Grand Fenwick’s intent, but it quickly becomes so. Rather than fulfilling his mission of taking a squad of twenty men to America and promptly surrendering, Tully (Sellers) the Hereditary Forest Ranger, Field Marshal and Grand Constable of the Armed Forces, succeeds in taking captive General Snippet (MacDonald Parke), four NYPD officers, Doctor Kokintz (David Kossoff), designer of the Q Bomb, and his daughter Helen (Jean Seberg). And the Q Bomb. It’s a disaster for Prime Minister Count Rupert Mountjoy (Sellers) and Leader of the Opposition Benter (Leo McKern), counting on even a nincompoop like Tully pulling off his limited task.

It isn’t really his fault. They arrive during a nuclear attack simulation – you know, the kind of thing Bill Gates is fond of, but again, with something equally invisible – and despite coming equipped with their Passports and health certificates (ahead of the curve there), they discover “There doesn’t seem to be anyone to surrender to”. Only a Decontamination Squad van driving around and the explanation that “They want people to get used to long alerts” (you know, all the better for living in a state of perpetual fear). It doesn’t help any either that the Grand Fenwick war declaration has been dismissed as a joke.

The oblivious Dr Kokintz, because you always need a bigger threat (or “deterrent” as the linguistic subterfuge would have it), is developing a “new bomb, infinitely more powerful than the H Bomb and capable of devastating an area of two million miles”. The Q Bomb (as opposed to drop) is composed of Quodium, a substance a hundred times more powerful than hydrogen. Once the Q Bomb has been “safely” escorted to Grand Fenwick, the concern announced by Duchess Gloriana XII (Sellers) is that another country will develop their own “X, Y, Z bombs and then, someday, one of them will go off”. Thus, disarmament presided over by neutral nations is essential. All very commendable. Except that, in the final scene, the Q Bomb, the greatest threat to humanity since… well the nuclear one, or maybe the neutron one… is revealed as nothing very special: “All the time it was a dud. Remarkable”. On top of which, “Only we know”. That’s the way to maintain fear of an invisible threat. It doesn’t even need to be real. Just position the idea in people’s minds.

USSR Ambassador: The peace-loving workers of the USSR would do everything to prevent the Fenwick bomb from falling into the greedy, bloodstained hands of the imperialist warmongering hyenas.

Since the ideas are so good, it’s a shame that most of The Mouse That Roared’s delivery is fairly anodyne. There’s much play made of the comedy value of the Q Bomb going off (leading to passing the “football” in a literal routine that ends with Tully crossing a goal line with it). There’s some admittedly decent material presented by Colin Gordon’s BBC announcer (that and the narration are probably the wittiest parts of the picture), with the Soviets attesting they also have a Q Bomb – again, see the nuclear “threat” – and volunteering their services to Grand Fenwick.

An eventual agreement takes place with Grand Fenwick (they may have to settle for a billion dollars, as a million is too low). This is accompanied by Tully (one of the dullest characters Sellers has played) and Helen (Seberg at her most nondescript) announcing their nuptials. Bobo (Rupert Mountjoy, the now ex-PM) and Benter are put to work crushing grapes (Pinot Grand Fenwick, “a small but sturdy wine with a virile bouquet”, was the principle export and source of income for the country, but unfortunately a cheap imitation called Grand Enwick flooded the US market, sending them to the edge of bankruptcy. Which is where the movie came in). There’s no discussion of how foreign funds traditionally result in the usurping of all sovereign rights, so engineering a puppet regime. Perhaps Wibberley saved that for one of the sequels.

Sellers is the star attraction, of course, and it’s said this put him on the map in the US, where The Mouse That Road was a success, despite its relative failure in Britain (the notion that the latter was down to one scene where Fenwick can’t wangle twenty volunteers for the army seems a bit of a stretch, particularly given the huge success of the very cynical Private’s Progress a few years earlier). It likely also explains that he became a difficult bugger to work with almost immediately (see Two-Way Stretch).

The Grand Duchess is by some distance the best creation here, variously claimed to be modelled on Sellers’ grandmother and Queen Victoria, but she’s also fairly slight compared the gusto Alastair Sim brought to his drag act in the St Trinian’s series. Likewise Bobo, allegedly based on Alec Guinness’ Disraeli in The Mudlark but coming across as a low-rent Terry-Thomas impersonation. Yes, there’s a superficial similarity to Guinness’ undertaking in Kind Hearts and Coronets, but the comparison is entirely unflattering to The Mouse That Roared.

General Snippet: I warn you madam, I know the Geneva Convention by heart.
Grand Duchess: Oh, how nice. You must recite it to me some evening. I play the harpsichord.

William Hartnell is engaging pulling straight-man duties, much as he did in Private’s Progress, while McKern is rather kept in check by Sellers. Parke’s blistering buffoon general actually wins the most laughs, owing to his obsession with the Geneva Convention and insistence that his meals be served on a tin plate (meanwhile, the New York cops are waited on hand and foot by pretty Fenwick femmes). And again, it’s the narration that hits the most bullseyes, relating at the outset how the Duchess is still mourning her Consort Count Leopold of Bosnia-Herzegovina “who disappeared in a tiger hunt 27 years ago”. And that, if many Fenwickians resemble each other, that would be down to their Founder “who was in every possible way the father of his country”.

Tully: Don’t stumble, don’t fall. Because if you fall, all of America falls with you.

Pauline Kael held that The Mouse That Roared “abandons its small, amusing idea and goes off on a wearying tangent” in respect of the Q Bomb. She also surmised “it was hugely and inexplicably popular”. I can’t disagree with either view. A thumbs up for the animated opening and closing titles, though, featuring the titular mouse courtesy of future Bond supremo Maurice Binder. 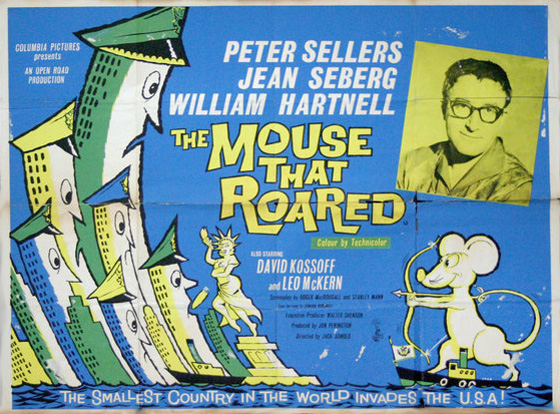 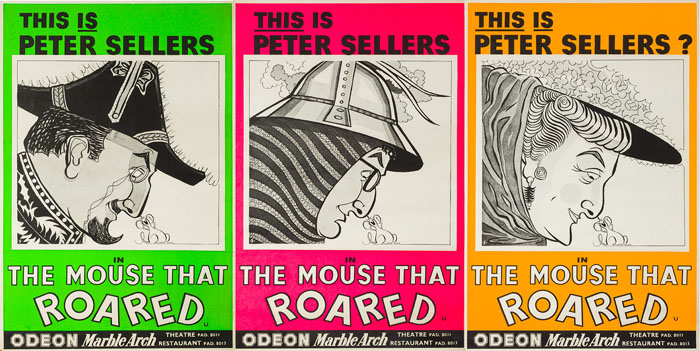