Maybe back in the days of the pioneers a man could go his own way, but today you got to play ball.

Which is more famous, Burt Lancaster and Deborah Kerr making out in the surf in From Here to Eternity or Airplane! spoofing the same? It’s an iconic scene – both of them – in a Best Picture Oscar winner – only one of them – stuffed to the rafters with iconic actors. But Academy acclaim is no guarantee of quality. Just ask A Beautiful Mind. From Here to Eternity is both frustrating and fascinating for what it can and cannot do per the restrictive codes of the 1950s, creaky at times but never less than compelling. There are many movies of its era that have aged better, but it still carries a charge for being as forthright as it can be. And then there’s the subtext leaking from its every pore.

Daniel Taradash adapted James Jones 1951 novel of the same name (Jones wasn’t pleased with the picture). It’s a magnificent title, derived from a Kipling poem (Gentleman-Rankers). Jones’ The Thin Red Line has been subsequently made twice, of course, and both works share an individualist protagonist in a system that irons out all traces of individual thinking. Rather than dealing with combat itself, the plot revolves around life at a Hawaiian barracks in the run up to Pearl Harbour. The attack is, by dramatic necessity, staged for the climax, although I couldn’t help feel it undercut the melodrama (in a similar respect, it’s the cadet training in Full Metal Jacket that carries the punch, rather than the Vietnam sequences). Michael Bay didn’t have much more luck when he re-enacted it. Naturally, there’s as much analysis of the machinations behind the Japanese attack as Oliver Stone would provide in The Secret History of the United States (none at all). And because it includes no armed combat, it’s also absent any discussion of the paraphernalia of heroism (something Terrence Malick’s The Thin Red Line is able to grasp).

Which isn’t to say From Here to Eternity doesn’t try its best to undercut classical Hollywood narratives of righteous warfare. Pauline Kael noted of this and the following year’s Best Picture winner, that “these films brought new attitudes to the screen that touched a social nerve…” Private Prewitt (Montgomery Clift), a bugler new to the regiment, finds himself under pressure – mostly in the form of vindictive punishments and coercive duties – to buckle down and join the regimental boxing team. Having previously blinded a man during a match, he is understandably reluctant. His foolish, philandering superior Captain Holmes (Philip Ober) scoffs at his attitude (“You might as well say stop war because one man got killed”), while the First Sergeant Warden (Burt Lancaster), who disdains Holmes, is convinced Prewitt will buckle.

But as presented, there is good army and there is bad army. Warden, “The best soldier I ever saw”, is obviously good. That’s why he doesn’t want to be an officer. He puts his men first. While the system here is presented as corrupt, it is by dint of ensuring cooperation within its rifle company, not endemically so. Holmes is an ass, the NCOs obeying his instructions to test Prewitt are (mostly) brutes, and even those who aren’t (Jack Warden’s Corporal Buckley), aren’t going out on a limb for him.

Director Fred Zinnemann and Taradash had to amend their adaptation to dampen down military objections. So in a climactic scene Zinnemann hated shooting, Holmes is forced to resign (in the novel he is promoted and transfers out) or face court martial, his superiors less than enchanted by his behaviour. Stockade Sergeant “Fatso” Judson (Ernest Borgnine) subjects Private Maggio (Frank Sinatra) to routine beatings when he finally has him locked up, but he is not characterised as representative (and the beatings occur off screen, while Maggio’s death is also caused by falling from a truck, rather than entirely due to the injuries inflicted by the sergeant). It seems the army was still not happy at the finished film, such that they took their name off it. I can’t say I’m that surprised, particularly as the Holmes resignation scene only ever feels like the sop it is. More than that, though, the picture’s entire underpinnings are downbeat; no character comes through improved by their experiences of or in the services.

There were other elements removed for production code reasons; rather than having suffered a veneral disease, Karen (Deborah Kerr) is unable to have children due to a miscarriage. Prewitt’s girl Lorene (Donna Reed) is a hostess at a “social club” (“She pays us to be nice to all the boys” Lorene says of the madam). Meaning she’s a hooker at a brothel. Gay themes from the novel are absent, although more of that shortly.

None of this – Time Out’s Geoff Andrew called it a “bowdlerised” adaptation – can distract from the picture’s mettle, however. The dialogue is polished, and the performances, even where they don’t fit, are compelling. Lancaster is a good choice for the tough sergeant. Kerr was cast over studio head Harry Cohn’s objections (he wanted Joan Crawford, until he nixed her over outrageous wardrobe demands). Sister Clodagh from Black Narcissus is reinvented as a swimsuit-sporting sex bomb. Kerr’s entirely commanding as an embittered woman whose spark of life is rekindled.

Sinatra had scarcely been able to get a gig in Hollywood prior to this (per Anthony Holden’s The Secret History of the Academy Awards), with legends forming around his lobbying for the movie (namely, the horse’s head in a bed in The Godfather). He’d win an Oscar and a newly-invigorated screen career. I’m a little less enthused, though. He’s engaging and eager, and because he mines the laughs, it’s a showy role, but his performance is much less interesting than those of most of his co-stars (perhaps his mob chums threatened the Academy of voters with depraved visitations on their pets too). Who also include Reed (winning an Oscar), Borgnine, Warden and George Reeves (Superman on TV). And Clift.

Clift’s act is easily the most interesting part of From Here to Eternity, but it’s interesting in the way that Brando’s turns are always the most interesting thing about any movie he’s in. It doesn’t necessarily mean they’re appropriate to the material. I disagree with Kael’s take that Clift is able “to control the charm… without ever stepping outside his inflexible, none-too-smart character”. For me, there’s an essential disconnect between Clift and Prewitt, in that the former is unable to disguise that he’s deeper and more self-aware than the man he is playing. That intelligence is perfect for the same year’s I Confess, but I find myself simply not believing here, even as the trials forced on the non-compliant private are dramatically engrossing. Prewitt avers “I’m a thirty-year man”, but I am never once convinced of this.

Kael also suggested “Clift’s innovative performance was buried in the public praise for Sinatra and Lancaster”. Although, it’s worth noting that, for such a heavily rewarded movie, it missed out on statuettes for its main roles (Lancaster, Clift and Kerr were all Oscar nominated but none won). Clift was reportedly highly upset by the lack of recognition (“What do I have to do to prove I can act?”) He also thought Lancaster was rubbish and “a big bag of wind”. Lancaster is said to have found Clift’s acting chops intimidating (it’s said Clift’s exactitude raised everyone’s game on set). Cohn hadn’t wanted the exacting method man, stating he was “no soldier, no boxer and probably a homosexual”.

The latter is an interesting observation, given From Here to Eternity’s barely concealed subtext. It’s there from the very first scene, in which Warden’s attentions are divided between Karen and newly-arrived Prewitt. Homoerotic subtext in military movies, where conflict between characters typically gives way to camaraderie, could be more recently seen in Top Gun (and doubtless its forthcoming sequel). Here, we follow each enlisted man’s blossoming romance in parallel. Both choose women who want to escape their situations (unhappy marriage, turning tricks) and may not look to closely at their prospective spouse’s proclivities. Both men attest to their girls their love of and devotion to the company of men (the service). Ultimately, both men choose the company of men over their other half.

Warden opts out of taking a captain’s exam, key to his future with Karen. Prewitt takes revenge on Fatso for killing his beloved Maggio, stabbing (penetrating) him and being stabbed (penetrated) in return (notably, Maggio in the novel’s originally censored material is established to have prostituted himself to male clients in the past). In another movie, say An Officer and a Gentleman, individuality would be the kernel of a great soldier; here, it is indicative of a sensitive soul. We see this most clearly when the two drunken men commiserate their troubles and Warden asks “How’s your girl?” as he strokes Prewitt’s head. And then, as the capper, Warden breaks off his intense heart-to-heart with Karen, the one where it’s clear their relationship is over, because he believes he has spotted the AWOL Prewitt (“I’m sorry. I thought you were somebody”). It’s quite clear where his deepest affections lie.

I mentioned that I didn’t find the climax too good a fit with the material. Apart from anything else, it seems to double down on the themes of just and noble war following justice served to Holmes (and this is despite resisting the usual catharsis of the decent man consistently resisting violence triumphing when he eventually succumbs; Prewitt beating John Dennis’ Galovitch is actually a prelude to his downfall and death, both acts of violence). Kael was of the view “Prewitt’s fate gets buried in the commotion of the Japanese attack on Pearl Harbour”, and it’s true. It doesn’t help that this is preceded by the clumsy manner in which escapee Maggio suddenly appears to interrupt Warden and Prewitt’s drunken tête-à-tête (only to swiftly die).

Zinnemann won Best Director Oscar, something he would later repeat for A Man for All Seasons. His approach has received differing responses over the years; Kael referenced his “lean, intelligent direction” while Andrews termed it “flat”. I’d come somewhere in between. You aren’t aware of his work, which at its best enables the storytelling to unfold expertly (in both those Oscar winners, it’s the performances you remember). You don’t, however, tend to think of him as very seized or dynamic (although, The Day of the Jackal, with its immediate documentarian bent, is no slouch). This was the first time I’d seen From Here to Eternity – that I recall, anyway – and my response is very much guarded recommendation. It’s far from the unqualified classic its reputation suggests, but it’s easy to see why it has been embraced as such. 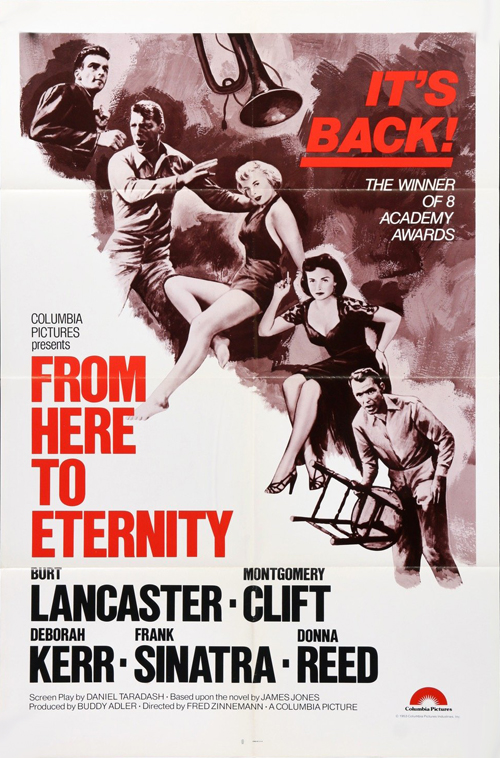 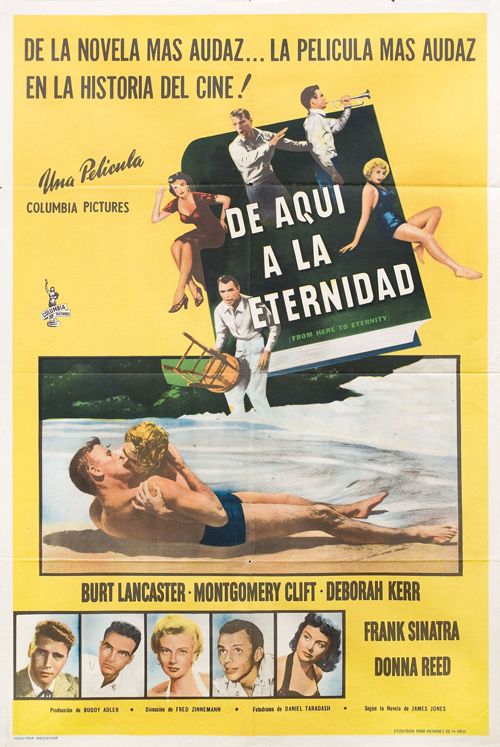 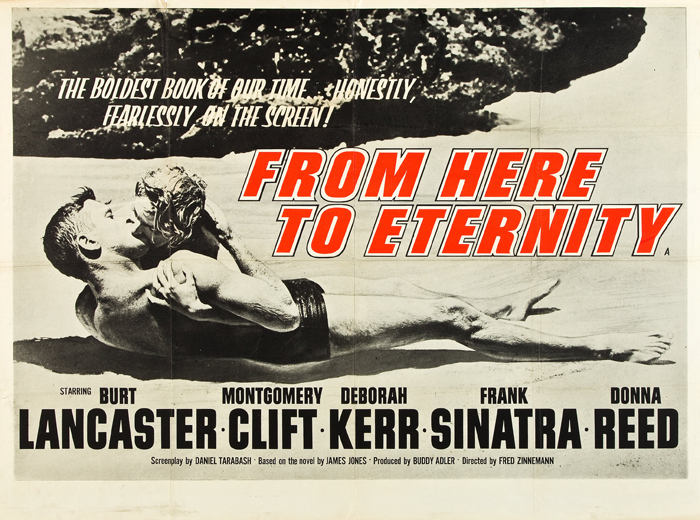