I was toying with the idea of translating Kafka into Welsh, but how do you translate his values?

There aren’t very many occasions when Peter Sellers immersed himself in “proper” characters, as opposed to caricatures or sketches. Probably because, in such instances, he had too little foliage behind which to conceal himself. Mostly, these were straight roles (Mr. Topaze, Hoffman, The Blockhouse), but there’s also this, a curiosity of a kitchen-sink comedy from Launder and Gilliat. Only Two Can Play’s far from the top of their game, an adaption of Kingsley Amis’ second (published) novel That Uncertain Feeling – his first, Lucky Jim, had earlier been made by the Boulting Brothers – but it’s an interesting performance from Sellers, filtered through a Welsh accent and a dry wit.

Bryan Forbes, at that point never more prolific and having just turned his hand to directing to boot, penned the screenplay. Luckily, there isn’t a Nanette Newman in sight. Which doesn’t mean there weren’t other casting problems. Virginia Maskell – probably most familiar to many, myself included, for the first episode of The Prisoner – apparently did not meet with Sellers’ approval (this was near the beginning of his difficult phase); he was rebuffed by Gilliat when he requested she be replaced. So convinced was Sellers of her deleterious influence, he sold his profit share back to Launder and Gilliat, thinking Only Two Can Play would bomb (it was Number Three at the British box office that year; interesting, given how obscure it is now).

Perhaps Sellers was secretly unnerved by how authentic Maskell is as Jean, the wife of John Lewis (Sellers). They live with their two children in shared accommodation in a South Wales town (Aberdarcy, Amis’ take on Swansea). John is a librarian and theatre critic for the local Chronicle. Much to Jean’s stoic sufferance, he has a wandering eye and an easy charm, and the picture’s best balance is struck in the early sequences where we glimpse John’s frustrations. Our empathy with him is never to an extent that we aren’t more sympathetic towards Jean, however.

Indeed, the rundown bedsit life is a make-do nightmare, with a precocious daughter and annoying co-tenants; Jean has to make do with it all day, while John gets to escape to flirtation on the bus (a recurring appearance by the becoming Marjie Lawrence – Sarah Greene’s mum) and further flirtation at the library. The picture is told very much through his eyes; Jean’s appearances form reactive bookends to John’s days, fully aware of his carry ons but realistic about the situation (“Just give me my housekeeping each week and stay out of my way” she tells him at one point). The picture ends with a too-cosy reconciliation, the pair sharing duties in a travelling library where she can keep an eye on his roving one; it’s a little too smug and illustrative of Only Two Can Play’s habit of veering from fine observational comedy to something rather broader and closer to the expected Sellers “brand”.

Because the movie’s first half, prior to John embarking – or attempting to embark – on an affair with Liz (Mai Zetterling), the wife of local councillor Vernon (Raymond Huntley), features some strong material. The picture’s populated by colourful supporting characters, including Graham Stark’s perv – “Pages 28 to 34 inclusive are the ones you’re looking for, Mr Hyman”, John informs him of a scurrilous tome – and Kenneth Griffiths’ dishrag of a fellow librarian Ieuan Jenkins. When Liz, active in the local dramatic arts, breezes in and takes a fancy to John – we quickly learn she’s a serial adulteress, with her ex-bit-on-the-side Bill, John Arnatt, still hanging off her every word – he can’t believe his luck.

There isn’t too much chemistry between Sellers and Zetterling, but that rather works to the benefit of the objectification at the heart of their affair, and the manner in which she attempts to manipulate him into dependency on her boosting his career (she engineers a promotion, one he rejects in due course when he realises it was entirely fixed).

The big problem is that, having brought them together, Only Two Can Play devolves into lame farce hijinks whenever they attempt to consummate. First, she invites him back to hers and titillates him in her bathroom before – inevitably – her husband returns, accompanied by a never-ending procession of fellow councillors. This provides an opportunity for Sellers to deliver some misplaced slapstick as, unable to escape, he mugs frantically to a bemused John Le Mesurier, pretending to be a plumber. Later, John and Liz head out to canoodle in the countryside but are intruded upon by a cow, a car radio that won’t turn off, and then the farmer with his gun.

Such proceedings suggest someone involved was concerned this might not offer the laughs Sellers was best known for, so best get some lowbrow yuks in. Unfortunately, it torpedoes the tone at a vital moment. There are some decent later scenes as Jean confronts John, and the job interview is amusing (inevitably, Le Mesurier is on the panel. He presses John for a family connection to the plumbing business: “Well, as a matter of fact, my father once had an unfortunate experience at Euston Station during the blackout. Uh, what happened was… You see, it was dark at the time and he didn’t realize that the train was actually standing at the station at the time… Apart from that, no.”)

John: I was ploughing through your novel today. Nourished is the Grass. Or perhaps I should say Nourish-ed is the Grass. We have an unsigned first edition. I believe they’re the rare ones, aren’t they?

The highlight is undoubtedly the party where John and Liz first kiss. There’s consistently fine observational writing and characterisation here, from Liz’s unmistakably diminishing comment on Jean’s dress to the fireworks between John and adored “bard” Gareth L Probert (Richard Attenborough). Probert is putting on a production of Bowen Thomas: Tailor of Llandidno. It’s a magnificent self-regarding turn from Sir Dickie, complete with chin beard and condescending manner (“The original white-collar slave, how are you Lewis?”) that meets its merciless match. Vernon is particularly amused when John offers his unfiltered view of the poet (John: A puffed up, undersized, four-eyed little twit; Vernon: Fascinating).

Indeed, if the entire film had been of that standard, perfectly judged dialogue and parrying, Only Two Can Play might be regarded as one of the Sellers classics. This was the same year as Lolita, and the actor was certainly entertaining more serious notions of artistic approval at this point (ultimately, his ego and insecurity would be his own worst enemy). With Clouseau and Strangelove, he had found the perfect balance that appealed to all bases, but rather than capitalise on such roles, he fell into scattershot hits and misses that strikingly contrast with the run of unmatched work he delivered from The Ladykillers to this point. Also popping up are Damaris Hayman (Doctor Who’s The Daemons, on the interview panel), Desmond Llewellyn (a clergyman) and Gerald Sim (thieving cigarettes at the party). 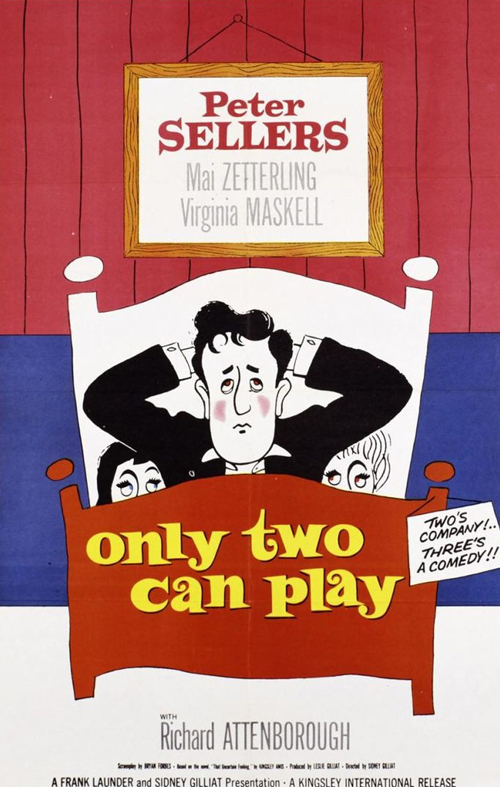