The Reverend Thomas says you wet his trousers.

In casting terms, Double Bunk could be a sequel to the previous year’s magnificent School for Scoundrels. This time, Ian Carmichael and Janette Scott (he still almost twice her age) are wedded, and the former continues to make dumb choices. Despite being an unlikely mechanic, Carmichael allows himself to be sold a lemon of a houseboat; last time it was the Nifty Nine. And Dennis Price is once again on hand, trying to fleece him in various ways. Indeed, the screenplay might not be a patch on School for Scoundrels, but with Sid James and the fabulous Liz Fraser also on board, the casting can’t be faulted.

Although, enlisting Sid and Liz to sing the theme song wasn’t such a fine move, even if elicits a classic Sid “Ra-ha-ha” at the finish. Fraser and James make for a perfectly matched couple. One is cast for her pulchritude (she plays Sandra – “You wouldn’t think by looking at her that she’s one of the best strippers in the business” – and spends much of the proceedings in a bikini). The other for his trademark allurement to said pulchritude. In that respect, CM Pennington-Richards’ movie isn’t too far from the Carry Ons both actors were appearing in at that point, but Double Bunk is generally much less focussed on the lewd and much more on the gentle ineptitude that characterises your typical Carmichael vehicle.

Which makes it a surprise that Sid (as Sid) is Jack’s (Carmichael) friend, rather than someone out to con him. Lest you assume James has been cast totally out of character, though, he is a used-car salesman and definitely as dodgy as you’d expect from James. Jack and Peggy (Scott, as ever, sweetly pretty) succumb to the charms of the houseboat when owners Reginald Beckwith and Irene Handl manage to palm it off (some too easy haggling lowers the price from £1100 to £750 – about £17,000 in today’s money). Alas, their prospective cheap-and-cheerful honeymoon rather falls apart when the roof springs a leak. Once Sid and Jack have fixed the engine – during which Peggy falls in the local drink – Sid suggests he captains the boat so they can enjoy a relaxing second honeymoon. What could possibly go wrong, particularly when Sid shows up with Sandra (Fraser)?

Price is Mr Watson, owner of a yacht and Peggy and Jack’s mooring (he attempts to charge them more than £5 a week for it – about £100 today). Various larks ensue during their trip, including reprimands for going too fast and causing a wash. When the Thames Conservancy Officers come on board and Peggy asks “Would you like a little something?” – referring to a tipple – Bill Shine, fixated on Sandra, replies “Oh, yes please”. Ra-ha-ha. Terry Scott later surfaces as a river policeman and is similarly impressed: “I don’t know about green belt. Take a look at her in white”. Ra-ha-ha!

Jack: Can you cook?
Sid: Are you kidding? I can’t even boil water.

Owing to Jack messing up the compass, an intended jaunt to Ramsgate (“You know, I did a strip show there once”) lands them in Calais. They’re barred from going ashore and also prevented from returning home (having run out of fuel). They also have no food. Luckily, Watson has berthed there too, hosting a stag trip with a lot of chums. Unluckily, he refuses to help them. So while Sandra puts on a striptease for the bawdy stag party (Ra-ha-ha!), Jack and Sid appropriate some valuable fuel. And champagne and caviar (an aside to this is that Sid appears entirely unaware of vodka’s inebriating properties and gets completely sloshed in about five minutes).

Naturally, there’s a need for a big finale. So Watson challenges Jack to a race home, double or nothing for Jack in rent as the wager. En route are mishaps on both sides, as Captain O’Malley (Noel Purcell, Noah in The Avengers’ A Surfeit of H2O) becomes affronted and then intoxicated, and the houseboat springs a leak (Sid: Get hold of that and wiggle it; Sandra: Alright, if you say so. Sandra proceeds to wiggle it. Ra-ha-ha!)

There’s nothing very singular about Pennington-Richard’s movie, then. He began as a cinematographer before moving into directing (mostly TV) and performed double duties on Double Bunk, writing its screenplay. Also appearing is Miles Malleson as a vicar (one of his go-to types). There’s a solid gold mistaken photo gag – “She’s got a bit of flat bottom, ain’t she?” says Sid, looking at one of the houseboat. Jack thinks he’s talking about Peggy. Sid then sees her actual photo and responds “What a cracker!” Ra-ha-ha! Naturally, Jack and Peggy manage to offload the hulk at the end. Double Bunk is mostly charming for the reliable main quartet (quintet, if you include Price). Undemanding but very amiable. 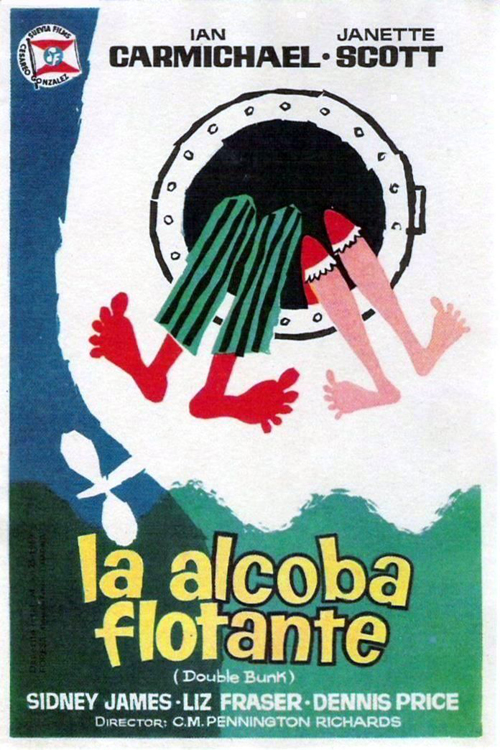