That’s what they call the devil’s skin.

One of the era’s great lurid horror titles – its unhinged company also includes Blood Beast Terror, Captain Kronos: Vampire Hunter and the astonishing Zoltan, Hound of Dracula – The Blood on Satan’s Claw, perhaps surprisingly, stands the test of time better than many of its stablemates. It relies less on by-then-established Hammer-esque staples than it on an atmospheric exploration of a community disintegrating from within, not a million miles from The Crucible in malignancy. Rather different in approach, however. Here, the surface is ripped away to reveal an unnerving patch of hairy skin beneath.

Doctor: Ah, there are so many sick and unknown maladies in these parts, I fear a general plague.

This setting is a rural eighteenth-century idyll. Well, drab overcast April. The Blood on Satan’s Claw has often been included in the “Folk Horror” sub-category. The most prolific examples being The Wicker Man and The Witchfinder General (I’ve never been a big fan of the latter) as well as Tam Lin, the works of Nigel Kneale, and The Owl Service and Penda’s Fen. Subsequent decades have seen The Company of Wolves, The Witch and Midsommar join the ranks.

Robert Wynne-Simmons wrote the screenplay and Piers Haggard directed (latterly mostly in television, including for Kneale’s The Quatermass Conclusion). Perhaps because Haggard wasn’t the horror guy – and this was only his second feature – there is less emphasis on gore or cheap shock tactics, while Wynne-Simmons comes up with a curiously distinctive angle for ridding the town of its plague of devilry

Doctor: We have much to learn. I will open a vein, and perhaps the humour will pass out.

As presented, the source of the village’s malaise is a strange skull unearthed by local yokel Ralph (Barry Andrews) while ploughing a field. A skull with a living eye! Ralph visits the sceptical judge (Patrick Wymark), insisting “It weren’t human, sir” and “It were more like some fiend”. In no time at all, unwholesome events are afoot. Peter (Simon Williams) brings home fiancé Rosalind (Tamara Ustinov, Peter’s daughter). She’s the farmer’s daughter and so well beneath his station. Staying the night, she goes mad in the attic and scratches Peter’s Aunt Isobel Banham (Avice Landone), who subsequently takes off, never to be seen again. Later Peter, believing himself strangled by a hairy demon fiend, cuts off his own hand.

Which is as nothing compared to the machinations of the local youth (although there are conspicuously several pension-age persons in their cult). Akin to a particularly diabolical Lord of the Flies – Wynee-Simmons was tellingly influenced by both the Manson Family and the Mary Bell child murders – ringleader Angel Blake (Linda Hayden) coordinates a campaign of murder, rape and slander while inept Squire Middleton (James Hayter) looks entirely in the wrong direction.

Judge: But you must have patience. Even while people die. Only thus can the whole evil be destroyed. You must let it grow.

Throughout all this, the judge has made himself scarce. He has, however, undergone an adjustment in his views after reading a book on witchcraft. He duly returns when Angel’s plan to reconstitute the demon is at its peak, gratuitously running through the beast. Wynne-Simmons had it that the judge represented “dogged enlightenment” whereby the darkness must be brought into the open to banish it: “When it becomes a fully-fledged cult, it will show itself”.

It’s an interesting strategy. Indeed, QAnoners have come up with much the same explanation for global events escalating in severity, whereby the public must be able to recognise the extent of the evil before it is overthrown (the only flaw with this, well one of the numerous flaws with it, is that it proceeds on the basis the public do wake up). That, along with the false accusation of the Reverend – the willingness to believe the victim immediately, dispensing with due process – makes the various themes in The Blood on Satan’s Claw quite topical.

It’s also interesting that Wynne-Simmons leaves the cause and effect of the devilry vague. We assume the skull is the remnants of Behemoth’s demonic force personified, but how, why and when this occurred is unknown. The actions it instigates in the village are intended to lead to its eventual reincarnation, but the picture is more compelling when it is less tangible. The emphasis on the destruction of the psyche in the early stages, in tandem with the body, is especially effective. Rosalind’s mental disintegration after being locked in the attic all night is witchily disturbing, most of all the clawed had extending from her robe (the demon effects, wisely limited, are contrastingly quite risible, at their nadir when a hairy gorilla arm breaks through the floorboards in search of Peter; this sequence is only saved by the outright horror of Peter severing his own hand).

Reverend Fallowfield: There is growing amongst you all, an insolent ungodliness, which I will not tolerate!

The temptation of Reverend Fallowfield (Anthony Ainley, sporting one of his better wigs) is also persuasive e, and precedes the similar treatment of virginal Edward Woodward in The Wicker Man two years later. Elsewhere, the cult’s influence is decidedly more visceral, both in the murder of Mark (Robin Davies) and the especially grim rape and murder of Cathy (Wendy Padbury, recently ex- of Zoe in Doctor Who). Indeed, there are some truly obnoxious oiks here. The suggestion is that the malignant influence will consume all once it is pervading the village, hence good guy Ralph discovering he has also been cursed with the hairy skin (once flayed, the pieces from each surrogate carrier will reconstitute the demon’s physical form).

Local Idiot: We know, if she don’t sink, she be one.
Ralph: If she sink, you done ‘er murder.

The Blood on Satan’s Claw is largely unalleviated by humour or levity. Ralph’s response of to the witch dunking of Margaret (Some Mothers Do ’Ave Em’s Michele Dotrice) is quite dry, as is the report on the missing Aunt Isobel (“She must have a constitution of an ox”). It’s notable too that, strong as Hayden is as lead antagonist, the movie lacks an accomplished diabolical figurehead per Christopher Lee in The Wicker Man. This does rather serve to underline the lack of cosiness in the construction, though.

Wymark is solid in his final English language film role. Andrews appears cursed with a ridiculous wig, but that’s until you realise it’s his actual ridiculous hair. Hayden was apparently under contract to appear, and at seventeen already had a history (controversially) of disrobing for movies; she’d go on to several appearances in the Confessions… series.

Judge: I am ready to return. But understand, I shall use undreamed-of measures, to conquer the evil.

Kim Newman suggested The Blood on Satan’s Claw “marked out an area of intergenerational tension that would become central to the American horror film of the 1970s”. However, it doesn’t explicitly position itself in such an oppositional manner. The malign influence is designed to undermine the traditional structures, yet it is equally inclined to see the youth turn upon themselves. As such, it is more characteristic of brainwashing and exclusivity (Margaret is rejected by Angel when the mark of the beast is shorn from her body). It’s in the collapse of the community that The Blood on Satan’s Claw at its strongest, and the rapidity with which this can occur. A situation that leaves all concerned bereft until a leader is invited, in whatever form, to take charge. 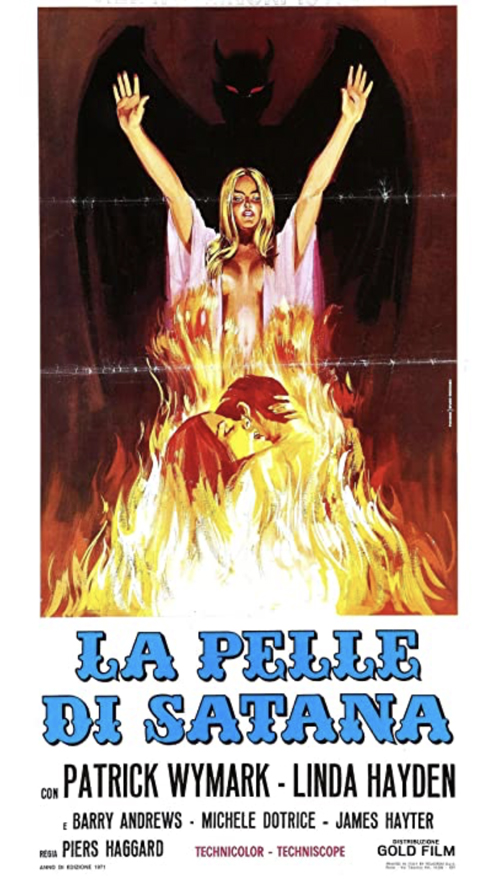 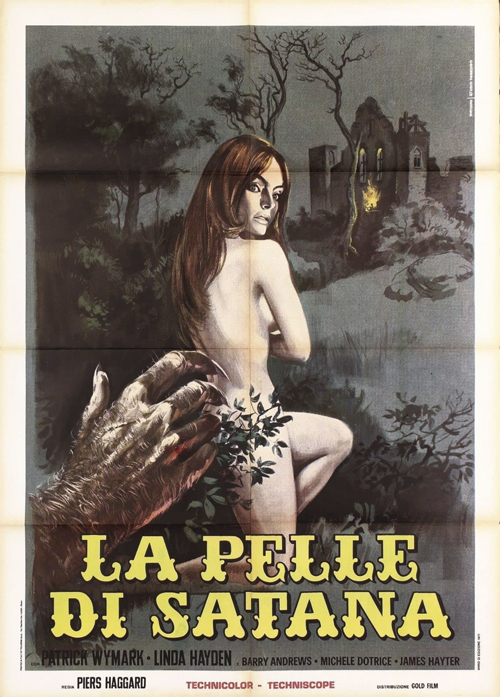