Seriously? I just spat in your coffee.

I’ve been having little luck finding commendable Oscar-nominated fare this season, and Promising Young Woman is no exception. Heralded as a satire, Emerald Fennell’s movie would be better labelled a polemic, one with all the subtlety of the pillow used to smother protagonist Cassie halfway through the third act.

Attracting adjectives in the “brave” and “audacious” range, the picture comes armed with the loaded dice of a soft target – rapists deserve retribution – no one is likely to disagree with, such that it’s consequent suggestion – all men are potential rapists or at very least complicit in justifying the same, Chris Vernon and Marcus Mumford doubtless honourably excepted – is one the critical cognoscenti are sure to get behind, lest they’re accused of making excuses for those whose behaviour it condemns and so proving its point.

And you know, fair call. At least that’s a strong point of view. Unfortunately, this same self-consciously “provocative” quality is in itself a mischaracterisation of daring; Promising Young Woman is more accurately responding to the latest “organic” movement and so “catching” the zeitgeist wholly mechanically, with all the nutritional zeal of reformed ham.

Had Fennell really mined the satirical potential here, then a clever and distinctive commentary might have emerged – perhaps even an audacious or brave one – rather than a tonal misfire. Promising Young Woman dances around disparate objectives, at times straight shooting, at others enjoying heightened absurdity, and others still embracing implausible plotting, before settling on sacrificial eulogising. Avenging angel Cassandra/Cassie (Carey Mulligan) lures potential rapists at clubs through feigning insobriety, only to turn the tables on them back at their places and lecture them on their predatory tactics.

Somehow – because Fennell is suggesting these are all beta males? – Cassie encounters no one who reacts violently to being put in their place (if her notebook is to be believed, she has engaged in this low-key vigilantism on hundreds of occasions). Which is very lucky, until it is not, although that situation represents a significant break with her routine. Would Cassie not go out armed with a Taser at least (no, because then the shock ending wouldn’t be guaranteed)? And are we supposed to assume that, duly chastened, her targets wouldn’t revert immediately to form? Fennell doesn’t explore this, although Sam Richardson’s characters refers to talk of her “psycho” behaviour getting around. Which begs the question. Does she really keep returning to the same bars again and again in different outfits on these numerous occasions?

Perhaps these issues are deliberate. Perhaps we’re supposed to examine Cassie critically in a way Fennell, as a debut feature director, has been unable to convey. If so, were she more of a visual stylist – a few shots of slo-mo gyrating male oafs and cinematographer Benjamin Kracun revealing a sometimes-poppy colour scheme don’t really count – who could suggest irony beyond soundtrack choices, the movie might have landed differently. But the problem with being generous to intention is that the plotting continually deflects assumptions of dexterity.

Cassie isn’t required to be wrong, to reflect on her own morality. Cassandra’s not complex. I suspect Fennell includes women Cassie sees as complicit – Madison (Alison Brie) and Dean Walker (Connie Britton) – partly to deflect accusations of a one-track tract, that Cassie is equal opportunities in denouncing those who perpetuate rape culture. And I assumed the insane lessons Cassie teaches them – leading Madison to think she might have been raped; suggesting the dean’s daughter is likewise endangered – are there to highlight that she may indeed be, as the dean suggests, a sociopath. After all, she is, isn’t she? She’s on a demented revenge spree and flitting between personalities at the drop of a hat. She’s Batman, even to the extent that she briefly hangs up the cowl.

But if that’s the case, is Fennell being sly or facile when she then narratively rebukes any objections to the treatments Cassie prescribes? The dean presents the entirely reasonable argument of presumption of innocence, one firmly demolished after the fact by the incriminating tape ex machina. It’s an introduction of evidence so risible, one kind of hopes Fennell had some other, non-literal intention, but I’m struggling to find it. This comes at a point when Cassie has renounced her wacko behaviour; in plot terms, therefore, it exclaims, “No, she was right, and here’s the proof” (through a hackneyed twist of an order usually reserved for a Joe Eszterhas script). And with it, there’s Madison confirming Cassie’s moral rectitude, shamed as she is into revealing this dark secret (and so providing confirmation that Cassie was right not to let dead friend Nina’s fate lie).

There’s probably a version of Promising Young Woman makes a virtue of this plotting, where the lurches in intent become coherent. If it was straightforward exploitation fare, with no pretensions to artistry, the daft twists and turns would likely have felt of a piece. There’s surely no doubt in any viewer’s mind that Ryan (Bo Burnham) is a bad seed as soon as he sips Cassie’s spit; worse still, he’s an inveterately irritating spit sipper. That he, the guy she was foolish enough to believe was a good egg, should be revealed at the scene of the crime she is haunted by, cheering it on, is as little surprise as it is laughably trite. At least Jodie Foster demanding her dog back or Ellen Page posing as scalpel-wielding minor didn’t attempt to sell themselves as above their genre conventions.

As far as I can tell, Clancy Brown is an undiluted good guy as her dad, but who knows? Certainly, Molina’s repentant lawyer is way too obvious. Again, if Fennell were a better director – or maybe not, and this was exactly how she saw it – this scene might have been better delivered, but the worst-of-the-worst’s epiphany seems much too calculated, and borderline parodic (although, I like the way Mulligan responds to his supplication, genuinely unnerved in a way she never is with those who do mean her harm).

It’s another of the picture’s variable messaging/plotting omissions that it structures the denouement, in which previously vilified justice is served after Cassie meets her end, as even possible. Fennell offers Cassie up as sacrifice to the cause, coding her as both avenger and victim, playing fast and loose with the rules of her fantasy depending on whether she wants to inflict cheap impact (Cassie must die because that’s “real”) or cheap impact (everyone is brought to book, at a wedding, which absolutely is not). As an edgy satire, l was put in mind of nothing so much as Peter Berg’s crude shockfest Very Bad Things.

Maybe Promising Young Woman is simply too acutely clever for me, its clumsy plotting an intentional façade, whereby it wasn’t suggesting any of the things I thought it was suggesting. Maybe we weren’t supposed to think Cassie had won ironically in the end (after all, she’s dead). Rather, that she dies because she’s a crazed sociopath who went too far (anyone in their right mind would have gone to the police with the evidence, or gone to the police with the defence attorney with the evidence. Which, as we know, wouldn’t have been dismissed this time, because the actual ending tells us as much…) I’m unconvinced, though. The only resonance here is cartoonish, in the manner of celebrating last year’s “deep” Best Picture Nominee Joker. Or better still, Harley Quinn; how clever of Promising Young Woman to sell itself with such pop bubble gum mimicry!

Indeed, Birds of Prey is a good point of comparison. Both attempt heightened visuals and fail to carry them through. Both attempt revenging characters but to obvious and sometimes puerile ends. Admittedly, Birds of Prey wasn’t part of any Oscar conversation, but then, neither should Promising Young Woman have been. And Birds of Prey at least had the good grace to demand far less time dissecting its relevance. At least it knew it was puffery.

Even Mulligan’s performance isn’t all that special. How could it be? She can only work with what’s available. I’ll grant Fennell’s movie this much; as much as its choices may disappoint, as much as I expected more from it, it avoids a turn towards tedium. Which is more than I can say for most of this year’s Best Picture contenders. On the other hand, Promising Young Woman fits right in with them, in scrupulously woke terms, so full marks to Fennell for shrewd timing. 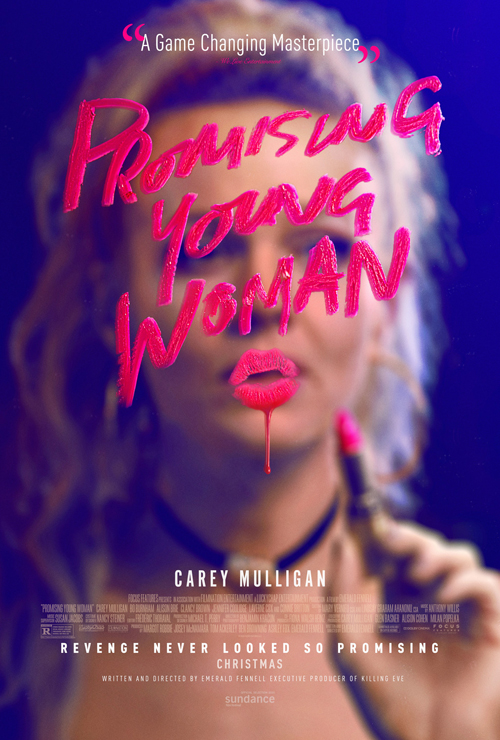 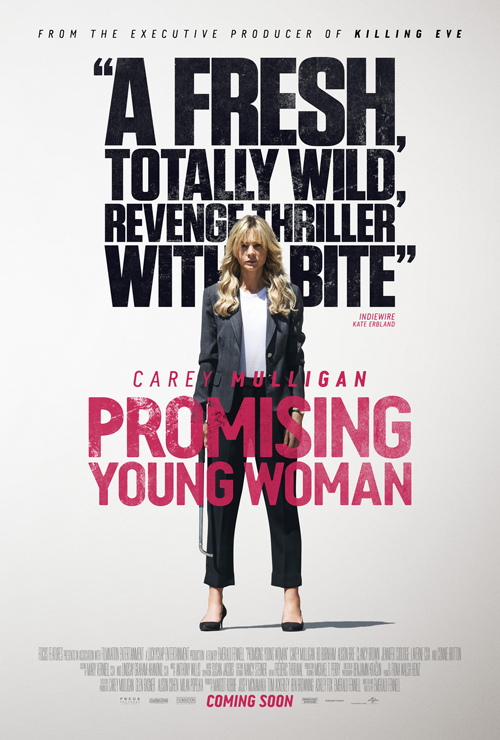