I’ve got things going round in ’ere that would make Maigret drop ’is pipe.

The signs were arguably there with the acclaim he received for his performance as Quilty in the previous year’s Lolita, but we’re right on the cusp of the second phase of Peter Sellers’ movie career here, just before The Pink Panther and Dr. Strangelove sent his star into the stratosphere. One might even trace this germ back to The Mouse That Roared (1959), his first significant US success and a spark for his more troublesome tendencies. Coming at the end of Sellers’ post-war British comedy period, The Wrong Arm of the Law is in some respects relatively run of the mill in its “cops and robbers with a twist” trappings, replete with a range of recognisable faces; it could quite easily have been made a decade earlier.

Parker: A quiet bit of breaking and entering is one thing, but sloshing a bogey in the execution of ’is duty. Oh dear, dear, dear!

The picture is dubiously able to boast five writers (with another two getting story credit), most prominently Ray Galton and Alan Simpson on their second feature after The Rebel. The premise, of known-quantity local criminals forming a truce with the police in order to bring down a gang of (Australian) interlopers who are making both sides look bad, is certainly original enough. However, despite some first-class interplay between the leads – Sellers and Lionel Jeffries, previously on opposite sides of the law in Two-Way Stretch – this comedy doesn’t quite have the verve of other, earlier outings from the likes of Ealing or the Boulting Brothers. Serviceable director Cliff Owen may be part of that, having come from TV (he could later boast the dubious honour of calling the shots on two of the three Morecambe and Wise movies). Most memorable are his freeze-frame punches during the climactic fisticuffs.

Pearly: I do not sell frocks in the West End. I sell gowns, mate!

I mentioned The Pink Panther, and Sellers is curiously playing a similar role there to that of Lionel Jeffries’ Inspector Fred “Nosey” Parker. That is, if Nosey came equipped with Pearly Gates’ fake French accent – he poses as a couturier in his legitimate business – and main squeeze Valerie (Nanette Newman). Because the protagonist in both movies is oblivious to his other half’s subterfuge. Admittedly, however, The Wrong Arm of the Law is considerably burdened by Valerie having no stated motivation for passing on her lover’s information to the rival gang. Added to which, Newman herself is entirely unsuited to the role (you at least want someone vaguely sympathetic, and vaguely believable as a grand schemer). It’s also the case that Pearly never finds out about Valerie’s “unfaithful” behaviour, while Clouseau is eventually apprised of the facts.

Pearly: Send in a nice pot of tea and a couple of fairy cakes, will you?

Besides Valerie, there’s the issue of the facelessness of the opposing gang, the IPO mob (“Impersonating Police Officers”). They’re essentially cyphers dressed as police, showing up to foil the best laid plans at selected intervals. It was probably decided that, with Sellers and Jeffries, enough friction was already on offer. Sellers is playing one of his competents (you could swap in Michael Caine from The Italian Job fairly effortlessly, although you couldn’t trust Caine with the French accent… or any accent for that matter; apparently Sir Michael appears uncredited here, although I didn’t spot him). It’s only Pearly’s blind spot for Valerie that is his undoing. This isn’t a role to bring Sellers broad laughs, then, but he does get a few chuckles in (particularly so describing next week’s educational films to the gang: Rififi, The Day they Robbed the Bank of England and The League of Gentlemen).

Parker: Do you know, I walked right through the building and out the other side without one single constable saluting me?
Pearly: As usual.
Parker: ’Ey!

Jeffries is on peak idiot form, and rather like Terry-Thomas in The Naked Truth, he steals the proceedings from his co-star whenever they’re on screen together (it’s no wonder Sellers became quite possessive about such things later on, when he had far more autonomy). Against Nosey’s wishes, his boss (John Le Mesurier) assigns Parker to Pearly “to become a criminal” for the duration of the operation (which inevitably goes wrong). In a surprise turn, Parker succumbs to temptation and agrees to split the loot from the heist with Gates. Alas, it’s only after their getaway that they discover the substance of the notes, whereby “The Comedy Bank of England promises to pay the bearer 500 laughs” (naturally, per the lineage of such movies, the criminals are not allowed to get away with it).

Brassknuckles: You know, they stripped all our clothes off and left us in the nude.
Pearly: In the what?
Brassknuckles: Well, we had our undies on.

Also on hand are Bernard Cribbins trying out his Oirishness as rival boss Nervous O’Toole (Cribbins in his mid-thirties, passing for a decade younger), Graham Stark, Arthur Mullard and Tutte Lemkow (this time playing a German, a German voiced by Sellers). Dennis Price has a scene as “Educated Ernest, confidence trickster”.

The Wrong Arm of the Law received a glowing Time Out review; Adrian Turner clearly tickled himself with his reading of “a sly portrait of Britain slowly emerging from the ‘Never Had it So Good’ days into the Wilson era”, on account of the “welfare state criminality” of the homegrown gangs being undermined by the emigres. I don’t know. Maybe… Even if that’s the case, the movie isn’t quite precise enough in its targets and execution to count as an all-timer. Nevertheless, you can’t go too far wrong with Sellers and Jeffries sparring. 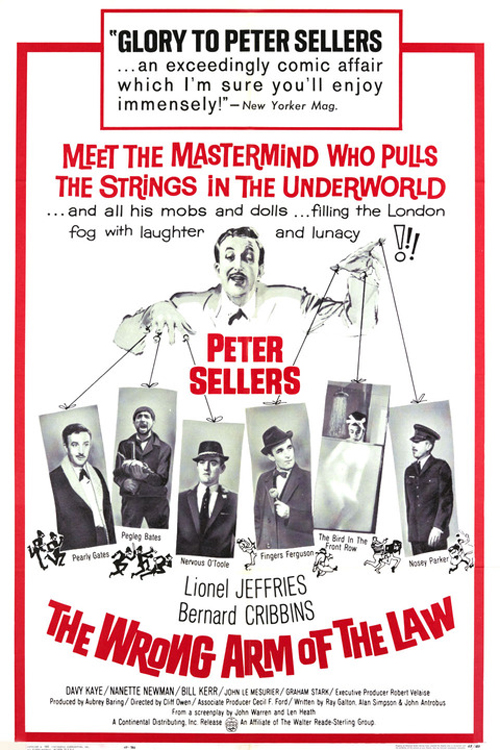 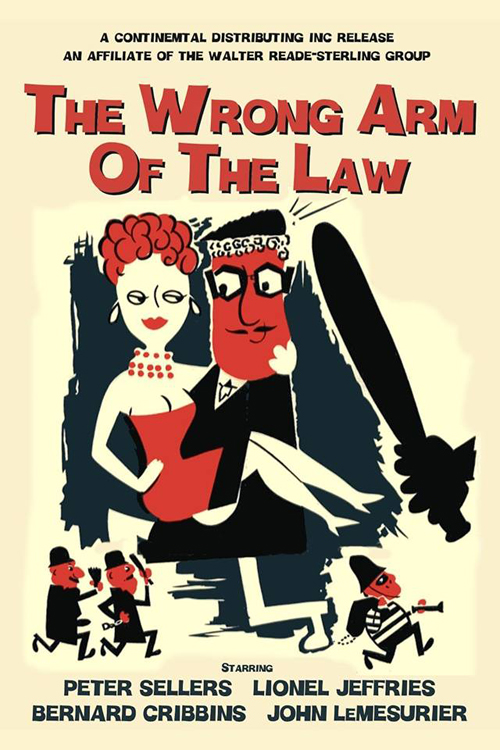