I’ll wager you anything you like, if American women stopped wearing brassieres, your whole national economy would collapse overnight.

One might suggestive the connective tissue between this and director Stanley Kramer’s other, conspicuously non-comedic fare, is the thunderingly obvious. By which I mean, whether he’s delivering painfully self-righteous social justice or broad slapstick, subtlety simply isn’t on his radar. I hadn’t revisited It’s a Mad, Mad, Mad, Mad World in a least three decades – so this is the first time I’ve actually bothered to count the “Mad”s; there are less than I assumed – but it’s good, bad and incredibly distended are nevertheless etched on my memory, and little has changed with regard to my takeaway. Which is predominately that Terry-Thomas’ gap-toothed majesty towers, as might be expected, luminously over his co-stars.

Amazingly, such an overstuffed spectacle records only two credited writers, William and Tania Rose. The former even has several classics (The ‘Maggie’, The Ladykillers) to his name. Coming up with chase/hunt format was surely the only sensible option for a production that needed to chop and change according to availability and/or swelling numbers (Stan Laurel was sought for Smiler Grogan, who literally kicks the bucket in the opening scene, as he metaphorically kicks the bucket – oh, my sides! – but had sworn off performing again after Oliver Hardy died; Jimmy Durante played the part, with a Laurel bowler).

We’ve seen this kind of thing since, if never on quite the same scale. The Cannonball Run, Rat Race, Scavenger Hunt and The Blues Brothers all adopt a similarly loose format – complete with mad stunts – give or take. The latter feature is notable, as John Landis provided a Trailers from Hell commentary for the It’s a Mad, Mad, Mad, Mad World trailer. He opined that something on this scale could not be tried now, but The Blues Brothers does evoke something of the same freewheeling, off-the-cuff, out-of-control quality. Landis’ backhanded appreciation is all over “a bizarre movie”: “It’s not great”; “It’s not a good movie, but it’s got great stuff”; “It’s not that funny, but there are brilliant things in it”. He quotes Joe Dante calling it “comedy nirvana”, although one of its most conspicuous issues for me as a kid – and even today, to a greater or lesser extent – was a lack of familiarity with many of the comedy faces. It wasn’t as if UK TV offered the same dietary provisions as the US. Added to which, I would have first encountered it mid-to-late-70s at the earliest.

I knew Terry-Thomas, naturally. Phil Silvers, of course. Buddy Hackett. He was in The Love Bug, so check. Mickey Rooney, yes. But Milton Berle? Ethel Merman? Jonathan Winters? Dick Shawn (who is riotously insane as momma-devoted groover Sylvester Marcus, surely the most dedicated performance in the picture)? I’m not sure I knew Sid Caesar either (although maybe, because of Barnaby and Me), but seeing the movie again, he comes across as the most comfortable of the comedy lead presences (it’s interesting therefore that he never had much of a movie career. He was hardly the Chevy Chase of the ’60s).

Which made locking Caesar’s character, dentist Melville Crump, and his wife Monica (Edie Adams), in a hardware store for half the movie (if not more) an odd choice. But then, the Roses, having set their balls in motion, discover they need to keep them up and in a holding pattern until the grand climax, be that through sending characters airborne, into a bout of protracted fisticuffs, or trapped in a basement. It might have been more satisfying had there been an actual treasure hunt, with accompanying foul play as the clues are solved and/or stolen, rather than setting out the objective from the off – $350,000 buried under a “W”; about $3m inflation adjusted – and so having to find means of stalling them from reaching it.

It’s a Mad, Mad, Mad, Mad World gets short shrift in many quarters, while its sheer extravagance ensures it’s simultaneously a cult item – with several cuts of varying lengths I’ve not investigated; I’m not one of its cultists – and has even garnered the Criterion treatment. As noted, my response from previous occasions largely held true; initial engagement with the set up but fatigue setting in by the ninety-minute mark. There’s some enjoyment to be had from the pairings, and the bickering and feuding. Hackett (Benjy) and Rooney (Ding Bell) enjoy solid chemistry. Phil Silvers’ Otto Meyer is written as thoroughly underhand and unscrupulous, fitting Silvers to a tee, but after initial encounters with Winters’ doofus Lennie Pike (in which Otto amusingly leaves him standing after hearing the finer details of the objective), he’s rather left scratching for opponents.

Terry-Thomas’ Lt Colonel J Algernon Hawthorne was originally earmarked for Peter Sellers, so the lore goes, but Sellers demanded too much money (and can you imagine how he wouldn’t have handled all those competing egos?) Terry-Thomas is inimitably Terry-Thomas, as might be expected, but he’s stuck feuding with the underwhelming Milton Berle as J Russell Finch, seaweed salesman, for much of the movie.

He’s given some decent digs at Americana, though, particularly the obsession with boobies, and his distinctive safari outfit means he – or his stunt double – tends to be more visible in any given long shot than his co-stars. He’s also subjected to a level of low wit from his transatlantic cousins that rather proves his point; more than one is reduced to mimicking his English accent as the smartest retort they can summon. Hawthorne and Finch end up in a dirty playground fight after saying terrible things about each other’s countries, including the former’s charge that America is afflicted with “the most unspeakable matriarchy in the whole of western civilisation”.

He may have a point, if Finch’s mother-in-law Mrs Marcus (Merman) is anything to go by. Finch has married Mrs Marcus’ daughter Emeline (Dorothy Provine) for reasons unclear on the latter’s part (Berle’s only 27 years her senior, and the same age as Merman). Merman’s performance is almost as legendary as Shawn’s as her son. An unmitigated font of verbal bile, nagging and tongue-lashing, Mrs Marcus is seemingly installed in the movie to induce an absolute loathing for the opposite sex (particularly since the only other female characters of note are relatively low key; Provine’s sympathetic shrew and Edie Adams’ suffering Monica). We can only conclude every indignity Mrs Marcus suffers – most amusingly being shaken upside down in order to dislodge keys secreted in her cleavage – are thoroughly deserved, because she is an old bag. Kramer underlines this by having the despondent, plaster-cast clad competitors all burst into uproarious laughter when she slips on a banana skin in the last scene.

Kramer has, of course, made certain there’s a message, one to bludgeon the audience with according to his custom: greed is not good, folks. It’s the undoing of everyone here, in body and soul. Curiously, the most significant debasement is reserved for Kramer favourite Spencer Tracy as Captain TG Culpeper, biding his time until the crowd converge on the loot before showing up and swiping it himself. It’s notable that Chief Aloysius (William Demarest), believing Culpeper to be a good and honest fellow, unlike everyone else in the department, attempts to blackmail the mayor into tripling Culpeper’s pension; Aloysius has enough dirt to put “you, the DA, myself and a two-thirds majority” behind bars for the next twenty years. The system is inherently and irretrievably corrupt. But this time, all Kramer can uncharacteristically do in response is to laugh.

Landis commented on the significance of branding in the picture’s claim to fame: it’s enough simply to march the Three Stooges on as fireman to elicit the required reaction. Although, Jerry Lewis gets a very funny one, driving for and over Culpeper’s hat when the latter accidentally throws it through his office window and into the street. On hand are Paul Ford (the Colonel from The Phil Silvers Show) to guide down a pilotless plane and Peter Falk as a cabbie. The other cabbie of note is played by Eddie Rochester Anderson, of whom, during the climax, Landis observed: “Eddie Rochester Anderson in Lincoln’s lap. Now that’s tasteless”.

Very patchy, sometimes tiresome, undoubtedly overlong and certainly failing to deliver on all that talent in terms of solid laughs, It’s a Mad, Mad, Mad, Mad World managed to notch up six Oscar nominations – winning one, Best Sound Effects – in a year for overblown spectacles buying up awards recognition (see also Cleopatra and How the West Was Won). In this case, they were mostly technical categories, with song and score making up the difference. Landis is right that It’s a Mad, Mad, Mad, Mad World is neither great nor good, but it escapes being an actual disaster, or a stodgy inert lump, by ensuring things are constantly going on, even if the hit ratio of those things going on is significantly lower than the miss. The movie’s biggest failing is that it’ll eat up at least two-and-a-half hours of your time (at minimum) as you sift through it for the ticklish bits. 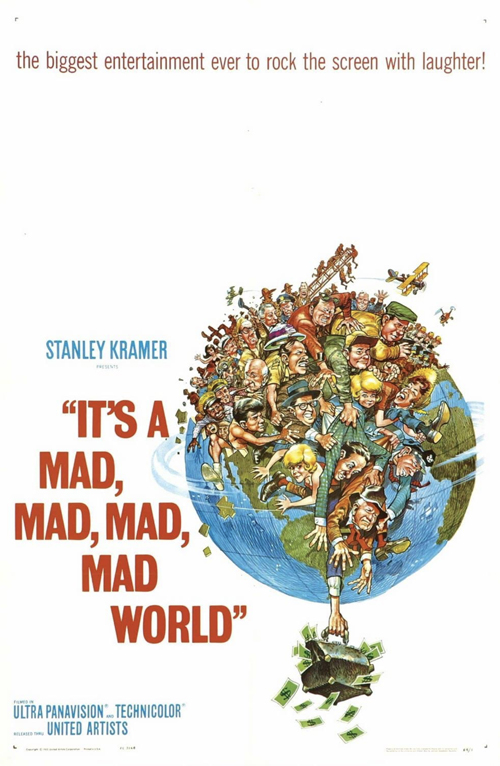 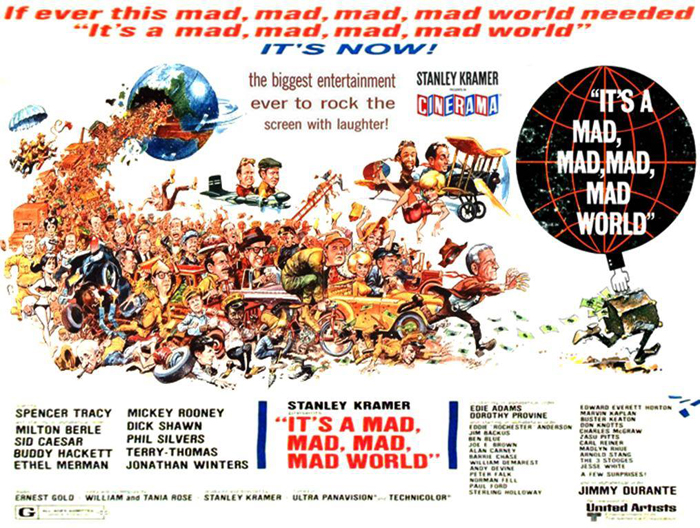