I like my side of the courtroom. The pay’s not so good, but the air is a lot better.

A lean, efficient little thriller, as you might expect from consummate journeyman Peter Hyams. As you might also expect from Hyams, Narrow Margin is unable to make that extra bound into the arena of a truly great lean, efficient little thriller. Nevertheless, this is quality B-material, with Gene Hackman doing his marvellously meat-and-potatoes darnedest to save a witness from hitmen on a train to Vancouver.

Carol Hunnicut: Protect me? You’re the one who put me in danger.

I’d suggest Hyams is permanently underrated, but I’m not sure that’s exactly right. It’s more that his talents are underappreciated; as a filmmaker, he was a craftsman rather than an auteur, despite invariably writing, directing and lensing his films. Hence working twice with Van Damme during a difficult ’90s stretch. And then Arnie, who thoroughly dissed him. But Arnie’s always one to blame his tools. Hyams had a strong – as in solid – run during the ’80s, The Presidio aside, and this represents the last of those. Yet Narrow Margin was underseen at the time and perhaps hasn’t undergone the re-evaluation it deserves.

Hyams decided to remake Richard Fleischer’s The Narrow Margin (1952) after seeing it on television one night (apparently Howard Hughes liked the movie so much, he once planned a redo with a couple of big stars). He follows its loose template of a cat-and-mouse on a train journey in a bid to shepherd a witness to safety. Here, though, rather than a mob boss, we have Anne Archer’s wrong-place-at-the-wrong-time blind date Carol Hunnicut witnessing JT Walsh’s mob lawyer being offed by mobster Leo Watts (Harris Yulin) and accompanying goon. She goes to ground until Hackman’s deputy DA Robert Caulfield digs her up. In Canada. Inevitably, he isn’t the only one on her trail, and before long they have fled to a train bound for Vancouver, hitmen in hot pursuit.

Caulfield: What does somebody who likes the train look like?

The movie absolutely relies on the pre-cell phone age and such concomitant ruses as cutting all communications en route. Hyams also introduces several plot turns less than deftly. It’s obvious as soon as Caulfield tells his cagey boss (JA Preston, of Hill Street Blues fame) of his scoop in front of associate Kevin McNulty that this is a red herring, that the boss is a good guy and it’s McNulty who will do him a wrong ’un. Which he duly does when Caulfield confides in him. Later, Caulfield strikes up conversation with a widow (Susan Hogan), his suspicions focussed on the morbidly obese passenger (BA “Smitty” Smith) who has been watching him. Naturally, the widow is the “third man” on the train, while fatty turns out to be railroad security.

Such unvarnished plot mechanics don’t really don’t dent the greater well-oiled engine, though. Hyams knows how to keep up the suspense, and he couldn’t have a more serviceable lead than Hackman. It’s the kind of role you might imagine Harrison Ford in, albeit Ford would have passed on it as a little routine (he was still a few decades from Firewall). It might have been better to reveal Caulfield was a decorated marine earlier in the proceedings, as there’s a whole action sequence in a washroom where you’re wondering how come a lawyer’s so handy (and even knowing how come he’s so handy, it fails to explain his ability to dive to safety through a tiny window).

Caulfield: First you’ve lost your briefcase and now you’ve lost someone. You guys ought to be more careful.

Sadly, Archer isn’t very well catered for; she was so indelible as the wife in Fatal Attraction (a role with some memorable agency), yet she appeared consigned to playing the other half subsequently (Mrs Jack Ryan) even when she wasn’t (here). Mostly, though, this lack of characterisation is indicative of how stripped back Hyams’ show is. It’s all about Caulfield dodging and interacting with the bad guys, led by Nelson (James Sikking, also of Hill Street Blues but a Hyams regular since Capricorn One). Sikking’s marvellously unphased, steely menace makes him a worthy opponent for Hackman.

I’m usually in favour of movies knowing when to quit, but it’s curious that Hyams sets things up for Caufield and Hunnicut to be met by the mob at the station yet opts to wrap up with an abrupt voiceover phone call once the rooftop climax is over. Of which, Hogan’s fate is pure cheese and more suited to your average Arnie movie of the period than a thriller attempting a semblance of verisimilitude. The perfunctory ending almost suggests someone nixed a budget spend somewhere.

Narrow Margin came from Carolco during their peak period. However, while they had seven releases in 1990, of which Total Recall was by far the biggest hit, most of the rest (including the costly Air America) bombed or underperformed. To be honest, they probably shouldn’t have been surprised Narrow Margin did little business. Not only is it staple B-fodder that stays true to its roots, but Hackman headlining at this point was absolutely no guarantee of a hit. Far from it. Put him in a supporting role (No Way Out, Postcards from the Edge) or Oscar bait (Mississippi Burning) and you’re away, but give him in an ’80s-style thriller – or melodrama – and audiences didn’t want to know (Misunderstood, Twice in a Lifetime, Target, The Package, Loose Cannons and Bat*21 all stiffed). It was Unforgiven that really gave him a second wind of strong parts until he retired.

Keller: No one loves a fat man but his grocer.

Which is in no way to do Narrow Margin down; it’s that welcome movie that knows its range. It’s unpretentious, gets the job done and provides a thrilling ride. Bruce Broughton delivers a suitably tense score, and Hyams under lights effectively, creating a strong atmosphere (there’s a great shot early on of Archer silhouetted through the crack of a door). Any movie that kills off JT Walsh and M Emmet Walsh in the first twenty minutes is going to have its work cut out for it, but Narrow Margin manages to bounce back. 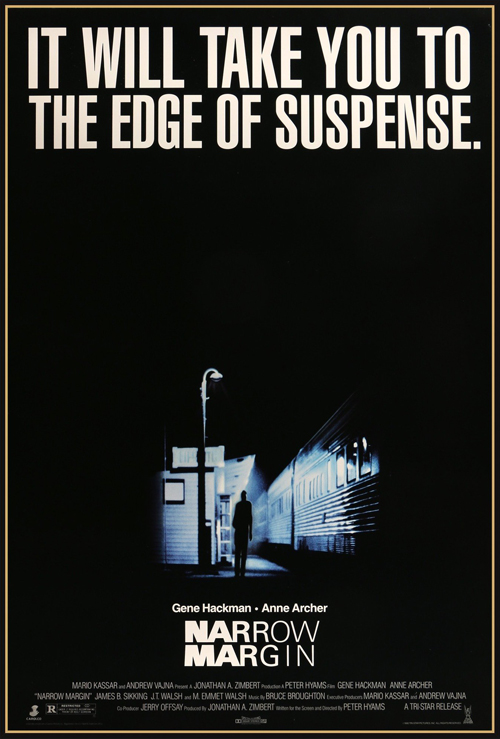