Full steam ahead for the dream.

A blinder of a premonitory suspense yarn from the Ealing stable. Indeed, The Night My Number Came Up was so well received, it garnered a BAFTA nomination for Best British Film (along with fellow airborne contender The Dam Busters; Richard III took the laurels). Michael Hordern’s naval commander recounts an unnerving dream to Michael Redgrave’s air marshal over dinner, only for the chilling realisation to dawn on the latter that it’s coming true exactly as described.

Hardie: It’s an interesting question, isn’t it? Perhaps nothing happens in this world unless somebody dreams about it first.

In essence, this is the kind of material ripe for a Twilight Zone, but the most remarkable part of The Night My Number Came Up is how superbly sustained it is over its ninety-minute running time. The details Commander Lindsay (Hordern) furnishes Air Marshal Hardie (Redgrave) with aren’t exactly rigorous – the presence of the air marshal and the number of passengers in a flight, which then gets into difficulties, a few other odds and ends – but they’re the seed for a growing malaise that infects each and every traveller who hears tell.

Robertson: If it did happen, then there’s no such thing as reality.

You can see elements of other movies and genres here – particularly the later ’70s disaster cycle – but director Leslie Norman concentrates on slow-building dread, such that you know it’s only a prelude to yet greater disturbance even when the action troughs. Norman is probably best known now as Beeb film critic Barry’s dad (Bazza managed to produce a list of Best British Films of all time in 2013 that omitted any of Leslie’s yet saw fit to include The Full Monty and Skyfall. Go figure). Like many heyday British directors, Norman spent much of his later career (mid-60s to late-70s) earning a crust in television, but his work also includes Quatermass-wannabe X the Unknown and the Dunkirk that wasn’t Nolan’s. It’s probably fair to suggest that black-and-white is Norman’s friend here, as there’s a significant amount of model work that wouldn’t warrant nearly the same free pass in colour. But it’s also the case that there’s no point where the evident artifice impacts the suspension of disbelief.

Norman had earlier worked as an editor, and there’s an unshowy confidence to The Night My Number Came Up’s pacing that speaks to a filmmaker secure in the knowledge his material will grip the viewer if allowed to unfold deliberately and with due diligence to the core concept and characters. Lindsay is introduced advising Hugh Moxley’s Wing Commander to search a certain stretch of the Japanese coast for a missing aircraft but refusing to divulge why, since he claims the Wing Commander will call off the search if he does. We then proceed to a flashback of events leading to this state of affairs, in which Lindsay reluctantly recounts a dream to attendees of a Hong Kong dinner party including Hardie, government official Owen Robertson (Alexander Knox) and Hardie’s PA Mackenzie (Denholm Elliott). The latter has already heard the unexpurgated version and will offer further details later.

At this stage, the story is little more than a curiosity, Robertson imparting superior knowledge of native superstitions regarding dreams (there are liberal references to “Chinamen”), whereby they are “glimpses of the future sent for their guidance”. As opposed to “too much lobster for dinner”. Even then, there’s a keenness to discredit any merit to the account, highlighting a divergence in the complement of travellers (the dream has eight passengers and five crew) and the type of plane… At which point, Hardie reveals they are travelling on a Dakota, per the dream, and not a Liberator as Mackenzie believed. And then there’s the reproof offered to Lindsay that will recur with greater conviction after the pilot has been informed: “Really, commander. That’s a terrible story to tell to flying men”.

Robertson: If we changed our plans every time somebody had a dream, things would soon be chaos.

The key characters quickly take shape. Redgrave is dependable and considered, open minded but not prone to flights of fantasy. Mackenzie was a fighter pilot during the war and suffered a nervous breakdown, such that he only flies as a passenger now (in theory, this sets the character up to lose it at a crucial moment, but the movie is more sensitive than that). It’s with Robertson that the screws really tighten. Most outspoken about the subject and writing a book that “proves the absurdity of suspicion”, he’s clearly protesting too much. As Mackenzie observes when they arrive at the airport the next morning and two soldiers (Bill Kerr and Alfie Bass) attempt to thumb a ride. Robertson strenuously refuses, to which Mackenzie responds “If we’d been eight and they’d have made us ten, you’d have paid them to come”.

While Robertson’s disarray increases as the harbingers pile up, the others are also far from immune. The flight’s first stage proceeds with the squaddies along for the ride, but while it has a hairy moment or two, they land safely. The all-round relief leads to looser tongues. Mackenzie tells Lord Wainright’s (Ralph Truman) assistant Mary Campbell (Sheila Sim), whom Wainright initially tried to swap out for a man so as to avoid the premonition of a female passenger, about the dream. He reacts strongly, however, when she in turn tries telling the pilot (Nigel Stock, later both Number Six and Dr Watson). Explaining himself, he stresses that it isn’t so much that he believe in premonitions as “… I’m certain you should never put such things into the mind of a pilot. It’s asking for trouble”. Norman then cuts to Robertson telling the pilot the lurid details (he plays mischievously with this again later during the flight, when Hardie tells Robinson, who gets an even greater sinking feeling, “I wouldn’t breathe a word to the captain of an aircraft about the things in that dream”).

Hardie: I’m very sorry, but you’ll have to wait for another aircraft.

The picture sets out the that no degree of conviction in logic and science can prepare one for the vagaries of fate, or “putting ourselves back a thousand years to the days when men were slaves to witchcraft and black magic”. Anyone saying otherwise is simply full of blusterous self-denial (“I shan’t sleep a wink tonight”). The false dawn on stopping of in Okinawa is soon redressed by the arrival of Bennett (George Rose, who met with a grisly demise in real life), “coarse, flashy with a loud voice” as the dream soothsays, angling for a lift but meeting with solid rebuffs at first; even the unflappable Hardie is reluctant to let him on board. Mackenzie later tells Robertson he knew even more of events that transpire; “That’s why I didn’t tell you the radio had broken down” – “I think I’d have died if I’d known that” comes the reply.

Bennett: No radio, no oxygen. You’ll be telling me next the ruddy plane hasn’t any wings.
Engineer: Well, it hasn’t.

The flight’s second stage is a superbly crafted white-knuckle ride, as predictions of “Storm, darkness, snow” and “Storm, snow, cliffs and a beach” come to pass, all the while with Bennett being coarse, flashy and demonstrating his loud voice. The plain rises to 14,000 feet but has to descend again because it is icing up. There’s a great moment where Hardie, realising he will be causing more harm than good, has to check himself after disagreeing with the pilot’s decision to set down on the beach (he eventually lands in a snow-blanketed valley). After all that tension, one can see why Norman wanted to end on a gag – Hordern tells the Wing Commander he has also dreamt about him, but not to worry: “If you do disappear, I’ll tell the authorities where to go to look for you” – even if it doesn’t quite land.

Few antecedents in British cinema spring to mind. The Night My Number Came Up isn’t a horror as such, but even the supernatural wasn’t really very common, give or take a Dead of Night. RC Sheriff of Journey’s End fame was credited with the screenplay, but Norman, who wanted to write the script himself, commented “I don’t think RC Sheriff added anything to it”. The story was based on a 1951 article in The Saturday Evening Post concerning Victor Goddard. Goddard, an air marshal, was interested in the paranormal and cited various experiences, one of which was seeing RAF Drem in Scotland reactivated; he experienced this vision when the airfield was disused, during a flyby in 1935. It became operational again four years later (this story is possibly more famous than the movie’s; certainly, it’s has greater currency due to its “time slip” element).

In Goddard’s incident, the scenario was similar to the one depicted, although Goddard was annoyed the film showed his stand-in Hardie becoming emotional at the unfolding events. Goddard’s interest in the area of the uncanny would duly burgeon, taking in several books, the Wrekin Trust (an “Educational Trust concerned with the spiritual nature of man and the universe”) and UFOs. His perspective on the latter tended more to the ultra-terrestrial – paraphysical – than extra. I suspect John Keel would have endorsed his general hypothesis:

UFO could more plausibly be creations of an invisible world coincident with the space of our physical Earth planet than creations in the paraphysical realms of any other physical planet in the solar system… The astral world of illusion, which (on psychical evidence) is greatly inhabited by illusion-prone spirits, is well known for its multifarious imaginative activities and exhortations. Seemingly some of its denizens are eager to exemplify principalities and powers. Others pronounce upon morality, spirituality, Deity, etc . All of these astral exponents who invoke human consciousness may be sincere, but many of their theses may be framed to propagate some special phantasm, perhaps of an earlier incarnation, or to indulge an inveterate and continuing technological urge toward materialistic progress, or simply to astonish and disturb the gullible for the devil of it.

Wainright: So the Chinese are right after all. Things are preordained.

Wrekin, with the stewardship of Sir George Trevelyan, did its bit for the growing New Age movement, and one might assume that, as an armed forces man, Goddard’s credentials were inherently suspect (along with all those ET whistleblowers). Perhaps so, but his interests nevertheless come across as genuine, his hypotheses insightful and his experiences tantalising. And Norman turned his experience into a fine and respectful piece of cinema, even if The Night My Number Came Up‘s (BAFTA-nominated) lead was a bit too emotive for Goddard’s liking! 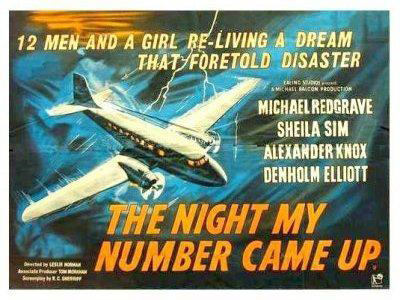