What are you suggesting? That Gulf War Syndrome is caused by UFOs?

It was the final third of the first season before Glen Morgan and James Wong were given a mythology episode, but it should be no surprise that it’s the best of the bunch. They’d written four stories up to that point, including the high-on-the-tension-scale Ice and the breakout for the series’ next-level potential, 1.13: Beyond the Sea. E.B.E. saw them playing with already established characters and situations – Deep Throat, the crashed craft/alien, local officials warning our heroes off their investigation – while relishing the opportunity to be extra slippery with the series conspiracy and paranoia tropes. Oh, and they introduce the Lone Gunmen!

Scully: From the trucker’s description, the shape he fired on could conceivably have been a mountain lion.
Mulder: Conceivably.
Scully: The National Weather Service last night reported atmospheric conditions in this area that were possibly conducive to lightning.
Mulder: Possibly.
Scully: It is feasible that the truck was struck by lightning, creating the electrical failure.
Mulder: It’s feasible.
Scully: And you know, there’s a marsh over there. The lights the driver saw may have been swamp gas.
Mulder: Swamp gas?
Scully: It’s a natural phenomenon in which phosphine and methane rising from decaying organic matter ignite, creating globes of blue flame.
Mulder: Happens to me when I eat Dodger Dogs. How can a dozen witnesses including a squad of police vehicles in three counties become hysterical over swamp gas?

At their best, Morgan and Wong were peerless contributors to the show. They moved on to Space: Above and Beyond, came back (4.2: Home), and then they screwed up Millennium (in Chris Carter’s eyes, I should stress). As such, it would be nearly the full twenty years before they worked on the show again.

You can see how visibly they’re into the 1970s paranoia genre antecedents here, most acutely with Mulder setting to work, The Conversation-style, on finding the bug he’s been told is in his apartment. But also through the manner with which they embrace the “Trust no one” ethos of contact Deep Throat, such that Mulder’s final conclusion is one that could be seen to summarise not only the show but the current state of the global society: “I’m wondering which lie to believe”. Wong’s unnecessarily hard on himself (“I think we played a lot of texture instead of substance”), as E.B.E. works on both levels he’s critiquing.

Byers: And, Mulder, listen to this. Vladmir Zhirinovsky, the leader of the Russian Social Democrats? He’s being put into power by the most heinous and evil force of the twentieth century.
Mulder: Barney?

As with the previous Season 1 alien excursions, there’s a deliberate choice to withhold rather than reveal. If it weren’t that we were witness to an enormous “mothership” in the opening minutes, it would be quite easy to conclude the entirety of the alien hunt was an elaborately staged hoax to go with the variously hoaxed photos and abductions Mulder and Scully encounter en route. As such, E.B.E. is possibly the season’s most effective interrogation of just what it is Mulder – and by extension, we the viewer – are pursuing, and the confirmation biases we carry with us on every step of any journey of discovery, and which may – or will – ensure we are never clearly able to discern the wood from the trees.

Rivers: You’ve gotten all you’re going to get out of this county. We will no longer cooperate in your investigation.

The essential premise isn’t so far removed from Fallen Angel; instead of tracking a crashed UFO, Mulder (and Scully) are pursuing a crashed alien. The difference is all in the writing and delivery, in both respects much more purposeful, urgent and resonant. This time, the UFO went down over Iraq, which was obviously topical but now seems a little opportunistic (other episodes, notably 3.8: The Walk, 5.1: Redux and 9:10: Providence would also reach for that touchstone).

Langly: Yeah, UFOs caused the Gulf War Syndrome, that’s a good one.
Byers: That’s why we like you, Mulder, your ideas are weirder than ours.

Mention of Iraq leads in turn to the mention of Gulf War Syndrome, although feverish, coughing Frank Druce (Peter LaCroix) turns out to be red herring (the series freely dipped its toe into the “Agent Orange of the nineties”, Gulf War Syndrome, several times, perhaps because at no point did it suggest a vaccine cause, although vaccines themselves do pop up regularly in its conspiracy lore and The X-Files Wiki does namecheck the anthrax vaccine – so antithetical to soldiers’ health it was eventually removed from use… until that is, it was reintroduced – while rubberstamping artillery shells with depleted uranium, here also referenced by The Lone Gunmen).

Scully: Those were the most paranoid people I have ever met. I don’t know how you could think that what they say is even remotely plausible.
Mulder: I think it’s remotely plausible that someone might think you’re hot.

Onscreen “objective’ events inform us there was indeed a UFO, and it did indeed go down over Iraq, but as to the purported passenger, we can never know for sure. Mulder’s stopwatch analysis initially announces supportive evidence, such that Morgan and Wong can later inventively use the same device as proof that our two FBI agents are being duped (“The stopwatches tell the same time”). They also have fun with their established personas (the upper-most exchange of scepticism and reproof), overtly referenced by the Gunmen (“Is this your sceptical partner?”), and then double back on this when Scully’s scepticism proves the necessary antidote to Mulder’s naivety where Deep Throat is concerned (they also have fun with the budding Mulder-Scully shipping section of the audience).

Deep Throat: Mr Mulder, I place my life in great jeopardy every time we speak. I’ve been a participant in some of the most insidious lies and witness to deeds that no crazed man could imagine. I spent years watching you from my, uh, lofty position to know that you were the one I could trust.
Mulder: Then why did you lie to me?
Deep Throat: I needed to divert you. You and Scully are excellent investigators and your motives are just. However, there are still some secrets that should remain secret – some truths that people are just not ready to know.
Mulder: Who are you to decide that for me?
Deep Throat: The world’s reaction to such knowledge would be far too dangerous.
Mulder: Dangerous. You mean in a sense of outrage like the reaction to the Kennedy assassinations or M.I.A.s or radiation experiments on terminal patients, Watergate, Iran-Contra, Roswell, the Tuskegee experiments, where will it end? Oh, I guess it won’t end as long as… men like you decide what is truth.

While the bugging/attempted hoodwinking of our heroes furnish the episode’s incidents, it’s the increasingly opaque motivation of Deep Throat that really underlines the labyrinthine halls of conspiracy at the show’s heart. Much better and more satisfying when this is intentional, as opposed to the consequence of slipshod and unwieldy arc plotting. It’s Deep Throat who purposefully feeds Mulder faked information and whose justifications for doing so only go to confirm – despite his protestations of being imperilled himself – that he should not be trusted.

His assessment that “there are still some secrets that should remain secret” reminded me rather of Rudolf Steiner when discussing the eighth sphere and how this occult/esoteric information was not supposed to be released at that time; he was only discussing it at all as a corrective to flawed interpretations (which immediately leads one to question what else he was withholding for the same reasons as Deep Throat: that there are “some truths that people are just not ready to know”). Mulder’s outrage at Deep Throat’s presumption is entirely justified. But is that in itself a deception? Certainly, Deep Throat’s subsequent account of international agreement that anyone finding an alien would be responsible for its extermination is an outrageous porkie. But even before Mulder says anything, Deep Throat must know he won’t believe that story.

Deep Throat: After the Roswell incident in 1947, even at the brink of the Cold War, there was an ultra-secret conference attended by the United States, the Soviet Union, the People’s Republic of China, Britain, both Germanies, France and it was agreed that should any extra-terrestrial biological entity survive a crash, the country that held that being would be responsible for its extermination. I, uh… have the distinction of being one of three men to have exterminated such a creature. I was with the CIA in Vietnam. A UFO was sighted for five nights over Hanoi. The marines shot hit down and brought it to us. Maybe… it didn’t know what a gun was or perhaps they don’t show emotion but that… innocent and blank expression as I pulled the trigger has haunted me… until I found you. That’s why I come to you, Mr Mulder, and will continue to come to you to atone for what I’ve done. And maybe sometime, through you, the truth will be known.

The tactic of “using me against myself”, that “I accept the most obvious conclusions and walkaway” is a smart play on Morgan and Wong’s part, even if it is, by the same token, a means to justify the unlikely ability of Mulder and Scully to involve themselves in all these cases without reprisals. This is, after all, a limited hangout tool of the disinformation operation, and a function one might easily argue the show itself serves. Not least in conveniently ceasing production immediately following the biggest conspirasphere event since the JFK assassination (on the flip side, we’re probably fortunate the series had no opportunity to avoid dipping its toe awkwardly in those waters; instead, we just have to make do with The Lone Gunmen Pilot’s predictive programming).

Scully: So they created this elaborate show just to deflect us again. I mean, wouldn’t it have been easier just for them to –
Mulder: Just to kill us? Yeah, I wondered that myself. Maybe they’re using me against myself like you said before. That I want to believe so badly that I’d just accept the obvious conclusions and walk away.

Generally, the episode works every bit as well as it did on first blush. Director William Graham delivers his second and final contribution (perhaps the problems besetting 1.9: Space left a bad taste and forestalled any further gigs). The Gunmen are at their best in their early appearances – very much less is more, as their popularity would prove the death of their cachet (shifting the support to central players rarely works). The recourse to getting into the power plant via a quick call (“Hack me some ID numbers” – yeah, okay) is massively unlikely, but against that is the manner in which Mulder and Scully do get caught convincingly swiftly.

In some ways, you don’t need the following six years (or twenty-six, if you like) of alien conspiracy after you’ve seen E.B.E., as servicing the subject coherently necessitates resisting tangible details. The more you drill down, the more fluid it becomes. E.B.E. effectively sum up the frustration with unaccountable agencies enabled to do whatever they damn please, even to the extent of our demise or slavery, and a rabbit hole that only gets longer the further down it one burrows. 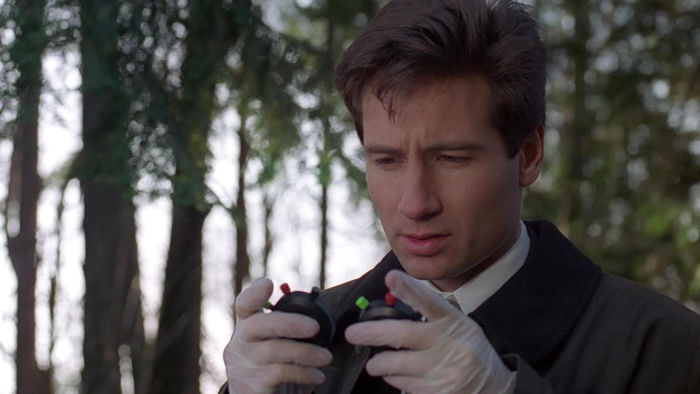 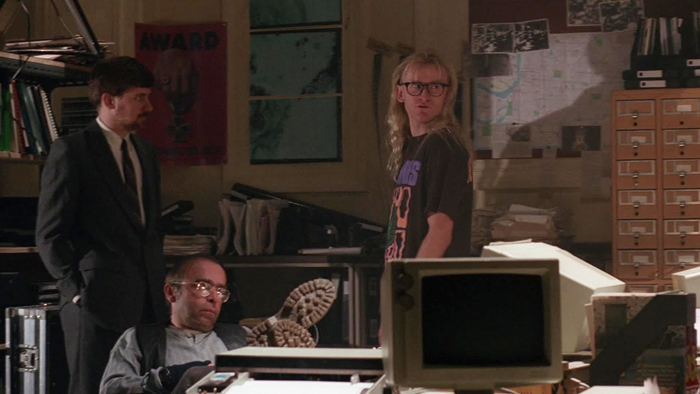 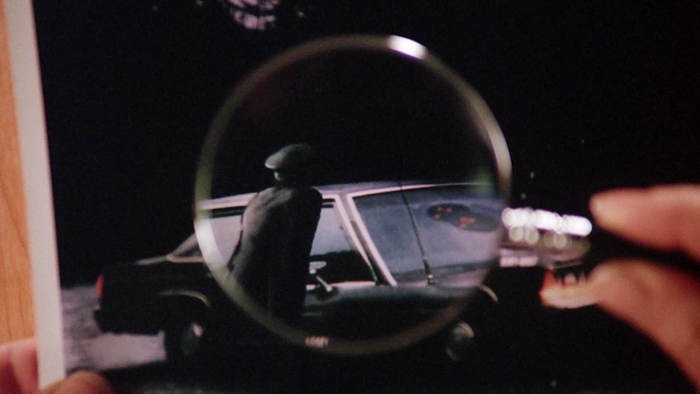 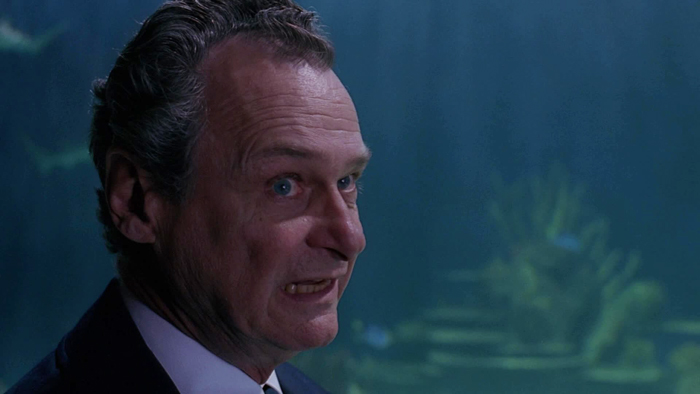 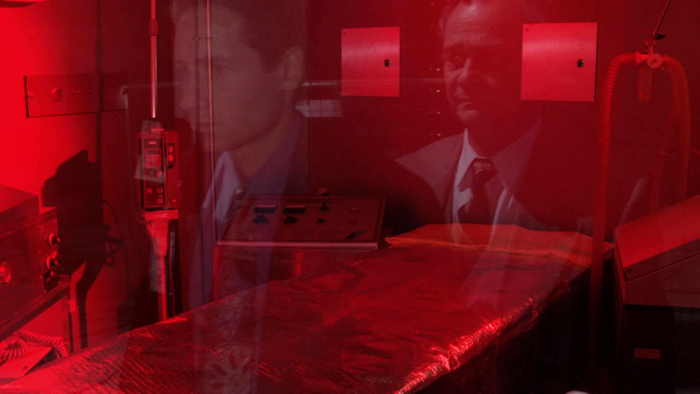