Then what can I say? How can I disprove lies that are stamped with an official seal?

Fallen Angel hits the ground running with Mulder on the ground, running around Wisconsin woods in pursuit of an alien craft before a crash-retrieval team gets to it first. As such, this is an early sign of action-Mulder that’s called into service every so often. Until a rifle butt to the face sees to his little fancy. The subsequent dynamics of the hunt for an alien are so-so, however, and the episode’s strengths revolve around the nascent mythos the show is building for itself.

Mulder: We both want the same thing, only you want it dead.

The series is again, at this early stage, resistant to the explicit confirmation of aliens, which means it instead doubles down on the hardware. Any unidentified craft might – if not a Libyan jet with a nuclear warhead – have a terrestrial origin. The Predator-esque camouflage of the alien might simply be hi-tech military gear. And Max’s scars… well, government abduction and experimentation sold as alien meddling is a popular reading of what goes on (and one ‘Jose Chung’s From Outer Space’ later had much fun with).

Colonel: You just made the worst mistake of your life, Agent Mulder.
Mulder: I think you just knocked out a filling.

This very literal realisation of a main arc story is underlined by Marshall Bell’s colonel, who could easily have stepped straight out of an instalment of The A-Team, hotly pursuing those Nam veterans who escaped to the Los Angeles underground. The military operation has been set up under the guise of a crashed plane carrying a toxic cargo and with it the threat of ecological disaster, so fitting very neatly into much broader conspiracy storytelling. Likewise, the Cheyenne Mountain officer being instructed to refer to the sighting as a meteor (“The meteor seems to be hanging over a small town…”) This makes for an object lesson in obfuscation of absolute facts to all but those at the very top of the hierarchal pyramid. The eco threat as a mask for the real agenda is particularly apposite, since we can readily see that nothing has changed there in the thirty years since.

This goes in tandem with Deep Throat’s very literal introduction, in which he explains the electric fence extending 15,000 miles into space, used to track and monitor “7,087 man-made objects that orbit the Earth” (yeah, right…) In common with the show’s modus operandi, Fallen Angel baits and switches with what we know; Max is clearly an abductee, and we assume, because the military is involved, they are after an alien. But there is also an intent to make the lines murky.

Is Deep Throat on Mulder’s side, as we have hitherto been led to believe, and double-bluffing Section Chief McGrath (Frederick Coffin)? Or is he really hoodwinking Mulder to avoid “having him exposed to the wrong people” (Wiki interprets this as Mulder becoming a whistle blower, but it could surely mean one of several things). Whatever his motive – and we will see he is playing on Mulder’s team, albeit a dangerous and two-edged game – the rebuff of McGrath’s intention to shut down the X-Files always seemed desperately thin. But then, I never found the recurring threat to do so (and occasionally succeed) a particularly engaging one.

Where Fallen Angel is very much successful, though, is in emphasising how the show’s mythology is developing apace, and not so much in terms of the ET arc. Max is the prime example of this. A geeky member of NICAP (National Investigative Committee of Arial Phenomena) – what’s the betting he’s the sole and founder; perhaps not, if E.B.E.’s reference is indicative – he has a track on unexplained phenomena that is very much proto-Lone Gunmen, but for his own aspect of the unexplained.

We’ll also see his reframing of the “caricatures” of Mulder and Scully to increasingly humorous effect as the series grows in familiarity and confidence (“the enigmatic Doctor Scully”). Mulder has his own nascent fandom (“We at NICAP have been following your career really closely”), and we learn how easy it is to keep tabs on someone (Max has been trailing Fox’s activities through travel expenses accessed via the Freedom of Information Act – if only the Act was always so forthcoming). We also learn of Fox’s extracurricular publishing under the name MF Luder (“And of course, I read your article in Omni about the Gulf Breeze sightings”).

Mulder is revealed to take a dim view of the “latest crop circle photos from Project Argus” (which appears to be this instance of them, rather than general dismissal). Which at least suggests a degree of pouring over the minutiae. Unfortunately, that side is let down somewhat by Max plumbing for such obvious touchstones as JFK and Roswell; it would have been much more believable had he offered more obscure references to someone also versed in obscure references, as it makes him sound like an obsessive character written by people (Howard Gordon and Alex Gansa) who aren’t obsessive. A little like the piss-take unemployed would-be abductee in Jose Chung chanting “Roswell! Roswell!” as if it were “Attica! Attica!”

There were a couple of extra-terrestrial themed episodes prior to Fallen Angel that I haven’t revisited as they aren’t part of the “official” mythology arc (this will also be the case later with the likes of 6.19: The Unnatural and 6.4/5: Dreamland). 1.9: Space is, obviously, an absolute stinker (a contender for the all-time worst), a muddle of Face-on-Mars lore and space shuttle guff. Dreadful as Space is, it does take the series’ less-travelled tack, of an alien presence as an energetic or spiritual force taking possession of a victim. 1.4: Conduit also favours blurring the lines between alien and psychic phenomenon, and it makes a significant early contribution to Mulder’s missing-sister narrative; there, it appears that the girl simply ran, or sped, off with some bikers, but Conduit also incorporates perhaps the season’s inexplicable highlight visual of the brother’s binary code drawings forming a picture of his sister’s face.

Mulder: You can deny all the things I’ve seen. All the things I’ve discovered. But not for much longer. Because too many others know what’s happening out there. And no one. No government agency has jurisdiction over the truth.

Director Larry Shaw only worked on one other episode (1.12: Fire), and he furnishes serviceable results, although I’ve never liked the cheap-shock jump-frame effect used during the alien attack sequences. Bellis’ performance as Max deserves particular praise, a convincingly wired guy at the mercy of forces he doesn’t understand (it’s a nice touch when Mulder counters Scully’s reference to Max being delusional with “Max doesn’t believe he was abducted by aliens, I believe he was”). It’s easy to see why his story was sequelised in Season 4. And while the series’ Mulder monologues could become increasingly repetitive (and at times downright laughable) his decrying of the investigative committee is an effective rallying cry to deception the world over, and will never get stale. 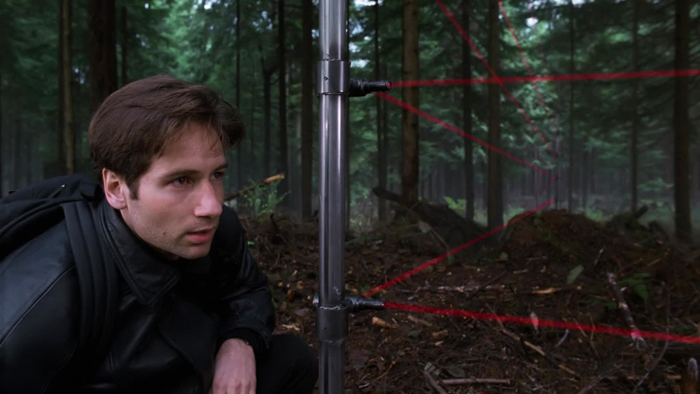 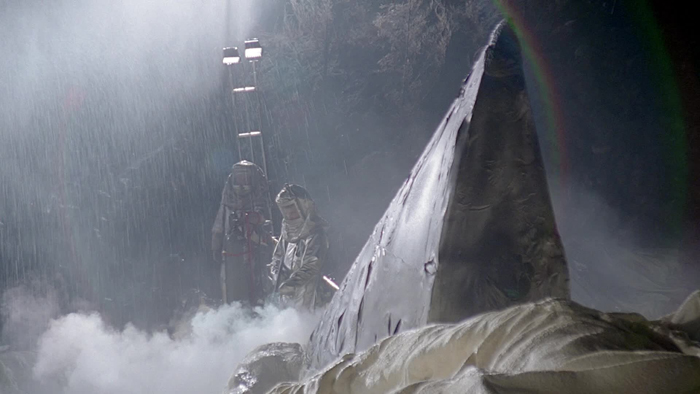 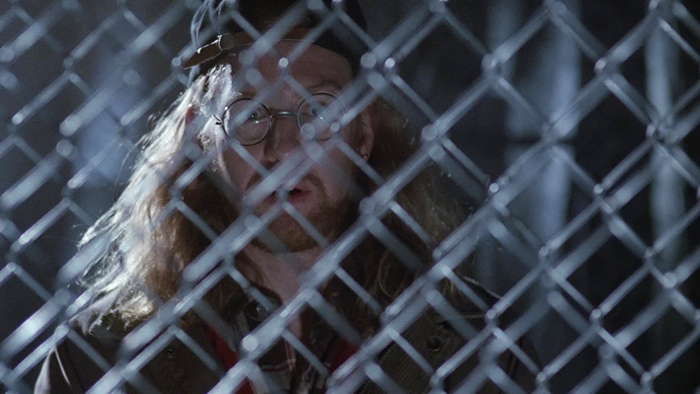 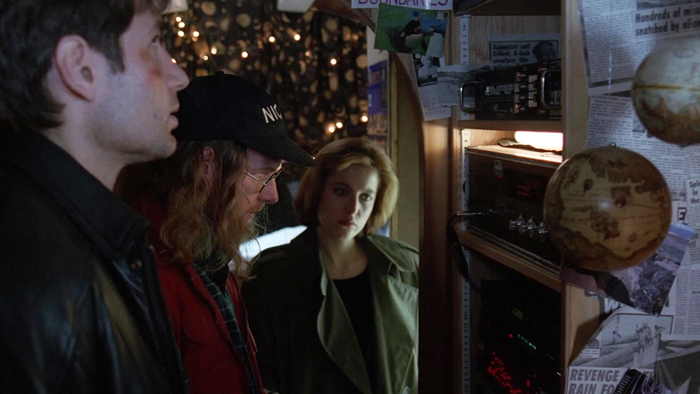 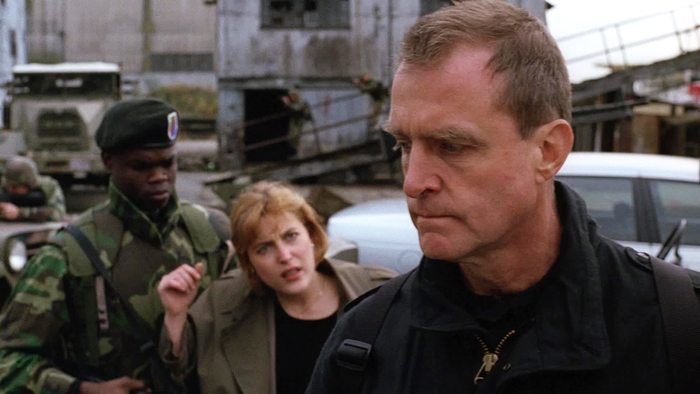 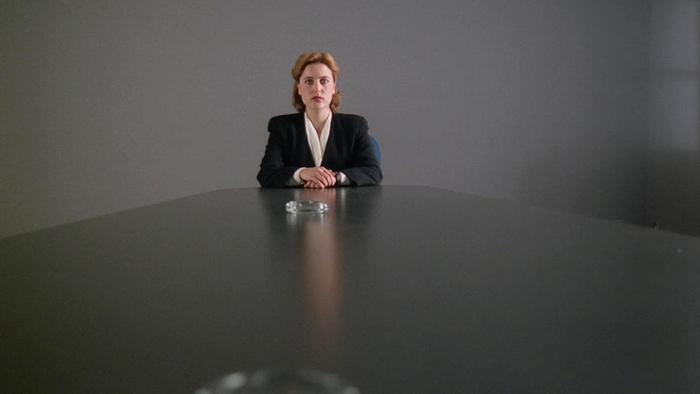