The Quatermass Xperiment
aka The Creeping Unknown
(1955)

The movie most responsible for reshaping Hammer’s output, such that, over the span of a few short years, it would become primarily known for horror. A remake of Nigel Kneale’s 1953 BBC serial, The Quatermass Xperiment boasts higher production values (and crucially, two thirds more of it survives), but it also betrays certain significant shortcomings. Which doesn’t mean it isn’t still vastly superior to the live 2005 BBC4 remake.

Quatermass: Don’t argue with me, I know what I’m doing.

The biggest problem with both this picture and the sequel is that, frankly, Brian Donlevy stinks. This was a period when a British movie still believed an American star was necessary to sell it across the pond (a blight afflicting blighty that took in such luminaries as Doug McClure and Andie McDowell); Hammer had a deal with American producer Robert L Lippert to this end.

Making Professor Bernard Quatermass American isn’t the issue, though. Casting a guy who thinks he’s in a gangster movie is. I mean, sure, if your ambition was to service one of the most dislikeable, unsympathetic protagonists cinema has seen, Donlevy’s your man. Otherwise, it’s a massive blunder (one Hammer repeated, presumably for the sake of continuity, with the sequel). This Quatermass is not only abrupt and rude, he’s ragingly incompetent, clueless and prone to contradicting himself. Basically, he’s a massive wanker.

Unsurprisingly, Kneale was unimpressed with Hammer’s pick. He was similarly unenthused by the changes Richard H Landau and director Val Guest perpetrated on his teleplay (Hammer must have taken note of his position, since Kneale adapted his own work for both sequels, and The Abominable Snowmen too. In the meantime, he also nixed them using Quatermass in X the Unknown). In particular, the ending was altered. Hammer chose to fry the mutant creature rather than having Quatermass persuade it to commit suicide. Perhaps for the best, as I can’t see Donlevy plausibly pleading with anyone. Maybe berating it into submission.

Director Val Guest felt likewise and argued the fireworks were a more appropriate movie ending. He was also unrepentant about Donlevy’s casting. Donlevy gave Quatermass “absolute reality”. Which is true, if that absolute reality involves routing the Mob (we must never forget that Guest ended his cinema career directing Tommy Cannon and Bobby Ball in The Boys in Blue). With that loss went the element of the mutating Victor Caroon (Richard Wordsworth) also absorbing the other two astronauts’ memories.

Lomax: Well, that takes care of my supper tonight.

Margia Dean is a lesser disaster than Donlevy as Judith Carroon (she was dubbed, bafflingly, with an entirely soppy voice). She’s the wife of Victor, who’s the only surviving astronaut of a three-man team Quatermass sent 1,500 miles into space in a “gamble with three men’s lives” (“You deliberately launched that rocket without waiting for official sanction”).

But if The Quatermass Xperiment stumbles badly in its choice of lead, the supporting cast are generally strong. Especially so Wordsworth, stealing the movie in a near silent and entirely convincing performance of a man who is no longer a man, wracked by pain and inner torment as his body transforms before him. Full credit is also due to Phil Leakey’s outstanding makeup job; Victor is ghoulish and gaunt, with an arm increasingly resembling Marvel’s The Thing. Wordsworth has been compared to Karloff as Frankenstein for mesmerising impact. This was presumably in the makers’ heads, hence the scene in which young Jane Asher comes across the stricken monster.

Quatermass: Would a hospital know what goes on out there in space?

Jack Warner is obliged to suffer a stream of grief from temperamental tough guy Quatermass, but his Inspector Lomax is a welcome presence. Warner was post-The Blue Lamp Dixon but pre-Dock Green’s version at this point, and if playing a copper is obviously no great stretch, he infuses the character with a welcome sense of humour (we first see him making a deal of shaving with a new-fangled electric razor; later he has five o’clock shadow).

David King-Wood, unlike Donlevy, actually seems to be portraying a professional as Dr Briscoe. Lionel Jeffries (not yet thirty but born middle-aged) is good in the barracking role of the man from the Ministry (normally someone to be loathed, but in Quatermass’ case, you have to admit he’s entirely on point). Thora Hird is a witness to Carroon’s rampage (“You mean, this time… it’s not a gin goblin?”) Gordon Jackson appears as a BBC producer. Harold Lang and Maurice Kaufmann (later married to Honor Blackman) also provide solid support.

The mutating man precedes the body horror of David Cronenberg as well as the general possession cycle that would infuse the genre once such avenues became less taboo. We can see the influence of The Quatermass Xperiment in a ream of Doctor Whos (most notably The Ambassadors of Death, The Ark in Space and The Seeds of Doom), along with big budget science-fiction horrors such as Alien, The Thing, and er, Lifeforce. John Carpenter was especially taken with Kneale’s work, hence extracting a Halloween III screenplay from him (although Joe Dante suggests he was the instigator of this relationship. Either way, having complimented Kneale, Carpenter then insulted him by rewriting the screenplay). Carpenter also credited his Prince of Darkness script to Martin Quatermass. It’s impossible to see the scene of the mutated cast off being fed upset mice and not think of the kennelled dogs being infected in The Thing. The drained, desiccated victims were also surely an influence on Lifeforce. It’s only in the final realisation, a standard, naff B-movie rubber squid thing, that the effects let the side down.

Quatermass: He’s now the shell of a man being transformed.

It must be admitted, even leaving aside Donlevy’s rigorously unsympathetic performance, that this Quatermass is emphatically unheroic as written. There is, inevitably in a man all for unchecked scientific progress and fully culpable for the adverse consequences, a hubristic side, but pretty much everything about this Bernard is misguided and stubborn. There’s little that might be labelled wise, shrewd or considered. No sooner has he brazenly frazzled the creature than he’s telling Marsh (Kaufmann) he’ll need his help because “I’m going to start again”. It’s ironic that the Jon Pertwee era of Doctor Who was directly modelled on Quatermass, because in this version at least, there’s likely no one with whom the Doctor would be more at loggerheads. This is scientific progress unchecked, without regard for human life or basic empathy. They may as well have put a gangster in charge of British-American Rocket Group.

Quatermass: What a way to invade Earth.

The Quatermass Xperiment boasts an effective score from James Bernard, winning him a regular Hammer gig for the next two decades, and moody black and white cinematography from Walter J Harvey. Hammer wilfully played up the “X” certificate with the title (Kneale reported that Sydney Gilliat showed interest in the adaptation, but blanched at the likely certification; it’s difficult to conceive that he’d have embraced the horror elements as readily either).

Lomax: That’s one premiere I don’t want to miss!

Time Out’s David Pirie commented “Perhaps the most remarkable thing about the film, in retrospect, is the way in which its sequence mirrors so precisely the intrusion of Hammer into the cosy middle class domesticity of British cinema in the late ’50s”. Which is a good point. It’s very easy to see The Quatermass Xperiment as part of the crowded field now, rather than leading it. Nevertheless, as a production, it is crippled by its leading man, and its memorable “antagonist” isn’t enough to ensure it pulls through unscathed. 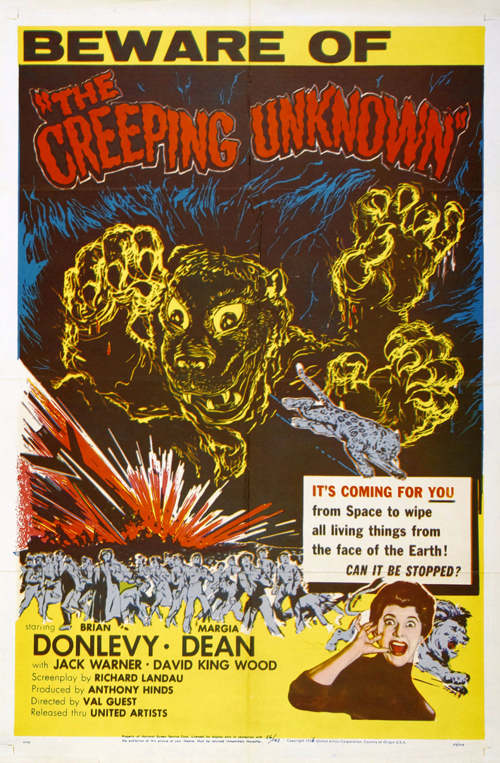 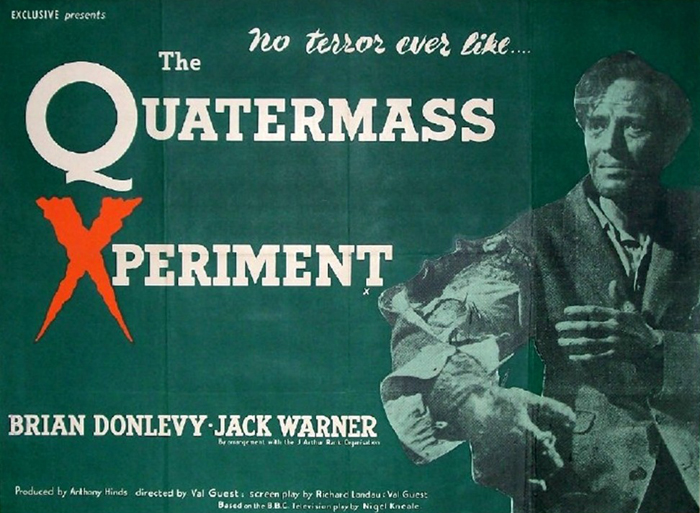