It’s appropriate that James Coburn’s title character is repeatedly referred to as an old hipster in Robert Parrish’s movie, as that seemed to be precisely the niche Coburn was carving out for himself in the mid- to late-60s, no sooner had Our Man Flint made him a star. He could be found partaking in jaundiced commentary on sexual liberation in Candy, falling headlong into counter culture in The President’s Analyst, and leading it in Duffy. He might have been two decades older than its primary adherents, but he was, to repeat an oft-used phrase here, very groovy. If only Duffy were too.

When a movie ends up this way, so sloppily directed by Parrish that one is barely certain he was even on set, it’s difficult to ascertain if the screenplay itself could ever have passed muster. Penned by groovy young occult hipster Donald Cammell as a deep-dive, some might say cynically minded, embrace of the prevailing vibe, much like the same year’s The Touchables (which he wrote first but was released second), it’s difficult to be fair to Duffy’s content and thus work out if Cammell ever had anything more on his mind than a larky rich-kids heist picture.

Certainly, he was so dismayed by the results that he vowed to direct next time. Which he did. Three years later, he would be deeply drinking in the down currents of the love generation with James Fox (again) and also with Nicolas Roeg, who would go on to the acclaim Cammell could never quite muster. And Duffy undoubtedly suggests that all is not hunky dory with the hipsters, nursing a deep suspicion of the prevailing, much-vaunted sexual freedom, as embodied by Susannah York’s easy lay Segolene (which in turn peels away Duffy’s carefree façade, rousing his jealousy such that he accuses her variously of being a slut and a “groovy old hooker” – Segolene objects to the first but seems content with the second).

Stefane: Well, you can create beautiful absurdities. Why can’t I?

One might extend this line of inquiry further. Let’s not forget that Cammell came from the connected classes, having grown up the child prodigy of a writer/poet father in a highly bohemian environment. Annigoni bacchanalian parties were attended by both father and juvenile son. He was definitely one of the favoured, going on to attend the Royal College of Art before becoming a leading portrait painter for London society.

He subsequently became chums with rampant occultist Kenneth Anger. It was also rumoured he had Aleister Crowley for a godfather (although Film Comment dismissed this as a “technical impossibility”). With such privileged beginnings, one might posit that Duffy’s entire premise, in which the upper classes see the entire counter-culture movement as something of a frivolous game, holds a kernel of autobiographical insight.

The same attitude holds for the apparatus that hypnotises the lower classes, beholden to the financial system and everything in it; money is merely a plaything to James Mason’s JC Clavert. Duffy is the setup’s outsider, and he’s rather patronised and manipulated than warmly welcomed. If Duffy remains ultimately separate, we later see blurring of societal lines in Performance, where the unlikely gangster form of Fox is thoroughly debauched, or further debauched, by his initiation into pop star Jagger’s world.

The Duffy screenplay was credited to Cammell and Harry Joe Brown Jr; the pair shared a story credit with Pierre de la Salle. It’s said the story was based on the experiences of Albee Baker as related to de Salle, but since the source of this is IMDB Trivia, that may not be wholly accurate. Cammell was certainly vague on the facts and dismissive of the movie generally: “It’s based on an adventure that really happened to a mate of mine, or maybe it was all my lovely group – Susie York, James Mason, James Coburn, and Willie (James) Fox. It’s not a serious movie, more of a bon bon, very carefree. Not worth discussing”.

His reasons for not wishing to discuss it were probably more to do with the experience – like pretty much all his filmic ones outside of Performance –not being such a happy one. Cammell was fired for “independent thought” during the production and was less than keen on the finished movie, as noted above. The premise of rich kids (Fox’s Stefane and idiot stepbrother Atony, played by John Alderton) attempting to steal money from their father, aided and abetted by Stefane’s girlfriend Segolene (York) and old hipster Duffy, the key to facilitating the operation, is very much a “bon bon”, but one can see certain personal impulses feeding into the brew.

Segolene: He looks groovy in that drag.

Father Charles (James Mason) is present at their wild parties, as Cammell’s father was at Donald’s, and if their relationship is far from one of equals, it involves a mutual embrace of immorality (or, if you’re feeling generous, amorality). In the last ten minutes, we learn Charles has been having his way with Segolene too, and indeed that he has been aware of his offspring’s entire plot throughout (it’s only Duffy, cottoning on, who prevents the entire affair from resolving itself in Charles’ favour). This is both suggestive of the Annigoni period and Cammell’s later love life, notably his embarking on an affair with a teenager – the daughter of Marlon Brando’s girlfriend – in his forties. Evidently, he considered himself an old hipster, one for whom the normal rules did not apply; not so uncommon in such rarefied artistic or select circles (in contrast to Mason’s character, who at least entertains his children, Cammell would shun any contact with the child he had with Maria Andipa).

Stefane: I want to create a fantastic amateur theatrical. A happening.

The biggest problem with Duffy the screenplay is that it’s so self-consciously empty of stakes – swindling tolerant crook dad (who broadly claims to engage in “nothing illegal”) – and is clearly a big lark on both sides. It absolutely needed a director who could embrace the material’s bubble-gum energy, were it to stand a chance of translating. Yes, there are guns, and there’s some corpse snatching, but Duffy is the only one present even to intimate that this is something to give one pause. Which means much of the proceedings revolve around interminable interactions between Duffy and the privileged oiks, as he gets the hots for Segolene, objects to their careless planning, and comes back on board the operation after he beds her.

Duffy: You’re not a psychopath.
Stefane: Oh, I’m not?
Duffy: No, somewhere inside you is a, an unborn psychedelic Cecil B DeMille.

These passages are ultimately rather tiresome. Ernie Freeman does his demonstrable best to inject some zip into the production with a very groovy score, but Parrish, an Oscar-winning editor, seems to have absolutely no aptitude for the visuals. The framing is sloppy, the timing – particularly for an editor – non-existent. Scenes that might well have been rambunctious fun – the characters dressed variously as sheikhs and priests – fall flat. The heist itself is only kept moving by Freeman.

Cinematographer Otto Heller has some fine work to his name, including The Ladykillers, Peeping Tom and The Ipcress File, but Duffy opts for a dull realist look, such that even Spain doubling for Tangiers isn’t overly attractive. Cammell’s screenplay only really stirs interest about ten minutes from the end, when the twist with Segolene is revealed; the rest is often a bit too much like a ’60s scene pop group movie vehicle, but lacking the pop group and their concomitant witticisms, camaraderie and banter.

Duffy: This, er, psychopathic convulsion you had just now, fascinates me. And, speaking as a professional clinical psychopathologist, tell me, was it not traumatic?

The non-pop group cast are all individually good actors. James Mason manages to rise above it all because he’s James Mason. Alderton plays an idiot with conviction. Fox likewise as an entitled brat. But the consequence is that both Stefane and Antony are incredibly irritating, the former monumentally so, and you have no wish to spend any time with him. York looks delightfully groovy, baby, but she’s also stuck with an entirely unsympathetic character. Worse still, there’s zero chemistry between her and Coburn.

Duffy: You’re not a slut. You’re just one big drag.

As for Coburn, sporting a Hunter S Thompson hat – or is it Monsieur Hulot? – and a very with-it vernacular, the character would only work if he was as wise, hip and above-it-all as the scenario and would-be style calls for. Revealing him as petty, jealous and obsessive entirely topples any breezy momentum the picture covets (and if Cammell wanted an analysis of the illusion of free love and partner swapping, he should have written Bob and Carol and Ted and Alice).

Stefane: Don’t get hippy with me.

Variety wrote “Coburn tries awfully hard to be a hippy” but it isn’t that he tries hard; it’s that the characterisation does its best to make Duffy uncool, and Coburn is playing to his comedic strengths when he is cool and knowing. We’re given a sniff of Swinging London before we’re off to Tangiers (Spain), a dismissive reference to The Beatles (had they lost their lustre even then?) and a definite swipe at modernist art as the gang arrive at Duffy’s pad and witness a series of plaster-of-Paris and mannequin limb atrocities adorning every nook and cranny (“sort of rotting erotica”, or “pop porno”).

Stefane: Did you ever think about piracy in your more active days?
Duffy: No man, its’s not in my bag.

I was trying to place the movie Duffy wanted to be, and the best I could come up with was the decidedly less glam and idiosyncratic (but much better made) Shooting Fish. Duffy’s a dead-in-the-water caper, and it’s only the undertow of Cammell’s psychosexual obsessions that identify it as other than frivolous. To be honest, I’ve never cared hugely for Performance; perhaps it’s the overkill of saturnalia. Apparently, his absurd transhumanist nightmare Demon Seed was intended as a comedy (who knew?) His later films are certainly infested with a brooding occult spell (his Jack the Ripper with freemasonic ties script might have made an interesting picture). If Roeg conjures the forces of nature, Cammell’s diabolism is altogether more malevolent, poised to erupt into violence at any moment. Duffy, however, offers no violence. Or consequence. And it barely scrapes a smile.

Duffy was originally called Avec-Avec, the title changed, it seems, when a journo mistook the translation for “with-it”. I can’t imagine a title imitating a French art movie would have better suited the material. York was unimpressed at the decision, calling it (presumably in character) “boring and square”. I wouldn’t call Duffy square, but too often, much too often, it is boring. 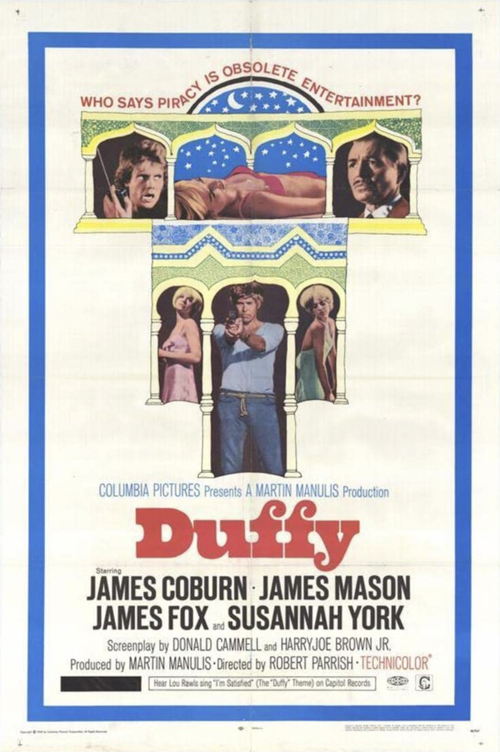