Hey, look, I know all about bourgeois clichés.

A sprawling, tone-deaf, indulgent mess of a movie from Spike Lee. So what’s new, right? At least BlackKklansman had a coherent screenplay at its core, undone as it was by typically scattershot direction and copious detours. Da 5 Bloods is shockingly inept on that score, likely the result of Lee overlaying his de rigueur didactic, windbag politicking over a shameless piece of exploitation cinema. It’s Three Kings meets The Treasure of the Sierra Madre meets Stand Up Guys meets (via some hilariously inept flashbacks) Platoon. But all of those influences – yes, even Stand Up Guys – are vastly superior.

Danny Bilson and Paul De Meo were responsible for Trancers. That should give an idea of where this started out, before Lee and Kevin Willmott rewrote it. Honest trash is one thing, Spike having the cheek to score points off Rambo while pissing out a veterans-waging-war-in-Nam picture himself is something else entirely. There’s so much wrong with Da 5 Bloods, it’s difficult to know where to start, but it beggars belief that Lee thinks it’s appropriate to show snuff news reel footage one minute and larkily homage – badly – Apocalypse Now the next. And then again, the next.

Da 5 Blood’s premise is the old one of buried treasure fermenting division and greed – leavened but not really by some lofty pretensions towards reparations for African Americans, just one example of the pulp/politics failing to marry – as a quartet of veterans return to Vietnam 45 years later. Paul (Delroy Lindo), Otis (Clarke Peters), Melvin (Isiah Whitlock Jr) and Eddie (Norm Lewis, who’d have been twelve when Vietnam ended, but who’s counting) are ostensibly on a trip to recover the body of fallen comrade Stormin’ Norman (Chadwick Boseman, looking unwell in the flashbacks and done a considerable disservice with such a shoddy squad leader hero role). However, they’re mostly there to claim a stash of gold bars they buried when sent to recover a crashed CIA plane’s cargo.

The “money undoes a military team” plot was also the subject of Netflix’s patchy Triple Frontier a few years back. That at least was well made. Da 5 Bloods spends the first hour ambling listlessly through various ruminations and reminisces and catch-ups as we get to know the cartoonishly sketched characters and their habits and hang-ups. Lindo’s Paul is awarded the lion’s share of the scenery chewing as a PTSD-suffering Trump supporter (or “the Klansman in the Oval Office”). Because he supports Trump, Paul’s obviously racist, temperamental, a live wire, prone to violent threats and inevitably – ultimately – responsible for the operation spiralling into disaster (it isn’t said outright – rare restraint there – but Paul’s political excesses are evidently caused by his PTSD; how else could his attitudes be so aberrant?) Lee being Lee, he has to stop the movie in its tracks intermittently and flourish brazenly patronising pointers to underline his message (look: footage of the Donald; look: a black hero during the war they should have made a movie about). These have all the artistic merit of cutting to a news report in the middle of Tom & Jerry.

When he’s not resorting to archive footage in a vain attempt to summon substance and respect, Lee’s feeding his characters risible dialogue. Dialogue that can’t be salvaged, no matter how good the performer is. Tien (Le Y Tan) is required to deliver a lecture on the indignities and abuse she suffered as a result of having a daughter to an African American. Hedy (Melanie Thierry) is trotted out as a self-loathing descendent of French plantation owners (“We exploited the shit out of the Vietnamese people”). She is working through her guilt, and introducing Chekov’s Landmine in the process, by defusing unexploded mines with a team called LAMB.

Each new scene or character promises an embarrassment of clichés and turgid exposition or exploitation. Scenes are crudely cobbled together so characters can freak out or abuse the local population (Delroy and his chicken). Entirely failing to complement the proceedings is Lee regular Terence Blanchard’s highly inappropriate score, utterly defusing any inclination towards pacing or narrative tension. Da 5 Bloods is two and a half hours of the cue at the end of a movie, just before the hero rides mournfully off into the sunset. Which makes the picture especially laughable during the flashbacks.

Yes, the flashbacks. I’m sure Lee had intellectual reasons for using his sexagenarian leads in the Nam scenes, but it’s still a very dumb move, particularly with fatty Whitlock Jr wheezing about the battlefield (Whitlock earns an extra point for saying his patented “Shiiiiiiit!” though). And then there’s the way Lee’s skill with action dynamics makes your average episode of Tour of Duty appear authentic.

In some respects, the second half of Da 5 Bloods, where things take a turn from the tedious to the outright ridiculous, is a marginal relief. The way in which Lee goes spectacularly off the rails put me slightly in mind of that bad-taste travesty Very Bad Things. We’ve already witnessed Paul becoming progressively more unhinged as the jungle trek progresses, especially so after finding Otis’ concealed weapon. The team find their money, of course, in a WTF moment of Paul’s son David (Jonathan Majors), who tagged along to keep an eye on dad, striking gold bars when he’s digging a hole to shit in. I shit you not. We’ve been waiting for a landmine to strike, and it duly strikes Eddie, in a manner so telegraphed and so excessive that it really belongs in Monty Python, or Tropic Thunder. Then – I mean, by this point it’s churlish to complain about plot contrivances as Da 5 Bloods is one long contrivance – Hedy and her landmine people show up to lend a hand and are set upon by mad dog Paul.

If the solution to David stepping on a mine seems like nonsense, that’s because it most likely was, albeit purportedly based on an actual incident(s). Fear not, though, there’s much more nonsense to come, with some truly loathsome Vietnamese rocking up, as Lee contrives to present them as both racist caricatures (one even says “We don’t need no stinkin’ official badges”) and wagging-the-finger lecturers (“Ever heard of My Lai?” – no, why don’t you tell us Spike, or provide a brief visual essay).

By then, with Lindo’s bug-nuts crazy PTSD act at full roar, I was questioning how anyone in their right minds concluded this performance might be Oscar nomination worthy. Then I realised even the Academy wouldn’t be that daft. And that was before Paul is hilariously attacked by a rubber snake (altogether now, “Goddam snakebite!”) That there’s also room for the “discovery’ that Paul blames himself for Norman’s death, complete with ghostly Norman materialising to forgive him, at least confirms to any last doubters that Spike has zero quality control. And there’s still the oozingly hissable Jean Reno – slowly turning in to Gerard Depardieu – to come, donning Paul’s MAGA hat for added thematic nuance.

The action climax involves a baffling showdown at some temple ruins – yes really – and Melvin jumping on a grenade (unsurprisingly, he snuffs it out completely). Followed by Spike showing us what they do with their money. Well, those who survived. Yes, it’s those reparations, entailing the revelation that it wasn’t just George Soros funding BLM! I can’t say I’ve seen very many 2020 releases – obviously, there weren’t as many 2020 releases as in a usual year anyway – but I’ll be astonished if I see one worse than Da 5 Bloods. 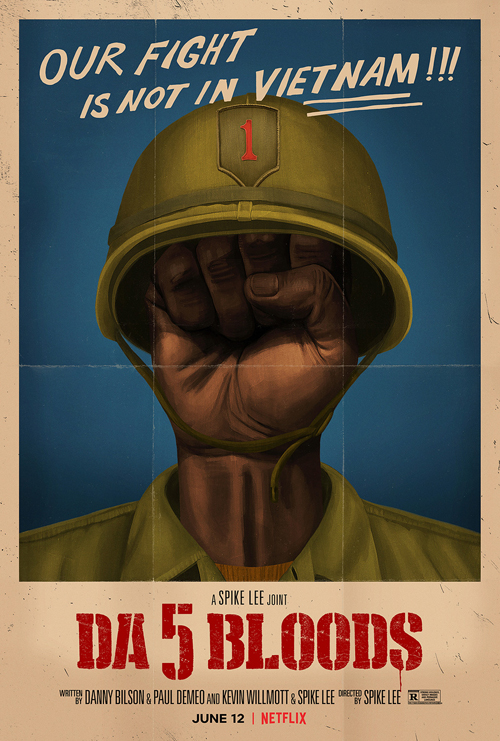