As far as anybody is, we’re the Martians now.

Quatermass and the Pit
aka Five Million Years to Earth
(1967)

The last and best of Hammer’s Quatermass adaptations, in no small part due to Andrew Keir taking over lead duties from Brian “bladdered” Donlevy. But mostly because this is by far Nigel Kneale’s best script for his professorial protagonist. Which means that even Roy Ward Baker’s so-so direction cannot prevent Quatermass and the Pit from remaining fresh, vital and thought provoking.

Quatermass: “The figure was small, said Mr Parker. Like a sort of hideous dwarf.”

The antecedents to and subsequent influence of Kneale’s trilogy capper (he had to go and turn it into a quadrilogy…) are well documented in a series of interviews on the Studio Canal release. Most notably via Joe Dante and Kim Newman, both of whom are very watchable and both of whom make many of the same observations. So Childhood’s End came before Kneale in ancient-astronauts lore, and HP Lovecraft before Arthur C Clarke, while von Däniken only gained currency afterwards. Since then, Zechariah Sitchin has made a whole cottage industry from “verifiable” (interpretations of) ancient texts with his Anunnaki = aliens claim. Neither contributor broaches the obvious preceding, pre-overtly science-fiction explanation for influence by higher beings, that of the Fall as the genesis of modern man, which takes in banished angels corrupting the path of humanity and fostering such delightful spawn as the Nephilim (Lovecraft, with Yaldabaoth/the demiurge, feeds into many Gnostic notions of a corrupt or distorted – fallen – creation).

It’s a stew, and a potent brew. Most particularly when developed by Kneale, because there’s such a sharp mind guiding the material. As Dante observes, Quatermass and the Pit eclipses the Donlevy movies because it has “an intellectual depth that the other pictures only hinted at”. Newman called it “intellectually terrifying, rather than emotionally terrifying”. Since then – since both the superior 1957 BBC serial and its decade-later film incarnation – we have seen all manner of variations on a theme.

Doctor Who got in on the alien-progenitor act with ’70s fare including The Daemons, Pyramids of Mars, Image of the Fendahl and City of Death. Then there are, as Dante and Newman point out, the likes of Stephen King’s The Tommyknockers, Tobe Hooper’s Lifeforce and Martin Quatermass’ Prince of Darkness. Sir Ridders retconned the xenomorph in Prometheus as the product of the same extra-terrestrial force that fashioned the error that is man (incarnated as pallid giants that might even pass for the aforementioned Nephilim).

In the alternative community, the viewpoint that humanity, if not directed by actual physical aliens, has been oppressed by inhuman forces is a pervasive one, one that only garners cachet when such forces may be construed as enacting a global cull, albeit a less humane one than a bolt gun to the back of the head.

Quatermass: What you are about to see is a memory, stored for millions of years in the very substance of that hull.

Indeed, when you hear lines about “A race purge, a cleansing of the Martian hives”, “It’s the way they lived, and it’s the way they intended their substitutes to live” and “I think we may have observed a ritual slaughter, to preserve a fixed society, to rid it of mutations”, it’s very easy to transpose that to genocidal machinations that might lead to the populace turning on each other (“You had to be destroyed”), be it through non-compliance or “mutation”. The Martian spaceship “draining the whole energy of London to turn it into a Martian colony”, and with it creating a hive mentality, isn’t so very far from the transhumanist ideal. Race riots are often cited as an influence on Kneale’s initial work, but as Newman suggests, he fosters an “up-to-the-minute” quality that engenders relevance in whichever era one approaches his work.

As a man in the pub observes “Three streets away, and we’ve got to see it on the telly. I tell you, people don’t believe nothing nowadays unless they’ve seen it on the telly”. Which is why a wizened monarch – or her digital avatar – pressing you to get the shot to aid the cull/metamorphosis is grist to the mill (and why, if you are “saved” from all this hideousness, you probably shouldn’t trust that either). The idea presented here is that we are infinitely malleable – Quatermass himself is essentially “a caveman” – unwitting instruments of whoever is pulling the strings, no matter how conscious we like to think we are (because, by design, we are always limited to seeing far less than we need to see to grant discernment).

Barbara: Hob was once a sort of name for the devil.

Kneale explicitly approaches an idea Doctor Who in particular would encourage with its subsequent endeavours: that the supernatural, the occult, the diabolical, have a very tangible, material, and above all scientifically explicable basis. The effects of a tunnel excavation turned archaeological dig turned exhumation of a WWII bomb turned alien spacecraft – cutely, given the boom in Nazi UFO lore, an explanation continually returned to is that it’s a wartime German superweapon – results in all manner of uncanny effects, many of them of a poltergeist or possessed variety (“The Germans didn’t make this and then lose the secret. You ask von Braun”; he was much too busy perpetrating the NASA hoax at that point, of course).

Vicar: I felt sure he’d been in contact with spiritual evil.

The religious verdict is forwarded when a vicar (Thomas Heathchote, cheerfully lobotomised in The Prisoner the same year) tending for Roger Avon’s electrician objects to Quatermass’ “Scientific terms, to explain it away”. Quatermass is admittedly rather flagrant in reducing anything psychic or unexplained to a Martian influence: “Poltergeist outbreaks, second sight, they’ve been recorded the world over, throughout the ages”. It’s a consummately materialist, rationalist interpretation, much as the haunted The Road turns out to be straightforwardly explicable time travel/future shock nuclear holocaust as witnessed by those in eighteenth century (who assume it to be ghostly goings-on).

Consciously or not, Kneale was a significant contributor to the prevailing social-materialist trend, one that reached a wide ’50s audience. He was a vocal admirer of eugenicist HG Wells, and although the content of Quatermass and the Pit would appear to rebuke Wells’ sympathies, Kneale’s world of science and rockets and tangible alien life does indeed promote a grounding influence, rejecting a spiritual or religious outlook, however much Quatermass may claim to agree with the vicar’s assessment of evil at work.

Newman points to the MR James influence on Kneale, however, highlighting their shared enthusiasm for inventing fake histories. Indeed, that aspect is very strong in Quatermass and the Pit, underpinning the odour of ancient evil: “This has well been known as a troubled place”; records held in Westminster Abbey; references to uncanny events in 1341, 1763 and 1927. He’s also skilled at adding apparently effortless thematic texture, such as the conjecture over how humanity would respond to a sentence of doom “say by climatic changes”; in which case, we would “probably go on squabbling as usual” (not if Greta has anything to scowl about it). The same with evocative descriptions, of Mars as “Nothing there but a few scraps of lichen” and how “five million years ago”, the Thames Valley was swamp.

Minister: You are ridiculously wrong. My duty now is to quieten public alarm and you, up til now a government officer with the same duty, you’ll keep your damn paws out of things!

Quatermass, an establishment figure, is on the fringes more than ever here. He clashes on a core-principles level with Julian Glover’s Colonel Breen and Edwin Richfield’s minister, neither of whom is willing to entertain the evidence before them (to be fair, that evidence does include a risible alien puppet show). This, most explicitly, is the oeuvre the Third Doctor would inhabit three years later. If there’s an analogy, it’s that the wheels of institutions, lacking as they are in self-awareness, are encouraged to believe they have autonomous control or insight, unconscious until it’s much too late that they’re as fragile and beholden as everyone else. That said, the colonel’s assessment “Fakes… like fairground mermaids” may be erroneous in context but stands as a relevant charge of disinformation in respect of the alien agenda (Roswell, for example), particularly given the common identifiers of diminutive, hive-mind insectoid ETs.

There’s debate over who the best Quatermass of the different versions is, but it must surely come down to the two Pit personas. Kiel is a very human professor, possibly the most relatable and least standoffish of the lot. He makes for an agreeably fallible figure, stumbling when it comes to resisting the alien influence. Instead, it’s first-billed James Donald as Doctor Roney who pulls through, at the cost of his own life, utilising ancient principles to practical purposes (mass into energy) via an iron crane dispersing the Martian influence. Hammer regular Barbara Shelley deserves a mention too, making a strong impression with relatively little detail as Barbara Judd.

Electrician: Jumping! Leaping! Huge, right up in the sky!

Production-wise, Quatermass and the Pit is solid if occasionally rather lacking. Arthur Grant’s colour photography is strong and vivid, but Roy Ward Baker is a solid rather than creatively formidable pair of hands. He stumbles when it comes to the imaginative side (the Martian orgy) and fails to play up those elements that could get under the skin; generally, his fourth season work on The Avengers around the same period shows much more flair. The effects are variable too; the poltergeist-y thrashing cables and flying equipment remain highly impressive, but the alien designs are hugely disappointing, not a patch on the BBC’s. Contrastingly, Breen’s melted visage is as sterling a display of grue as you ever did see.

Mark Gatiss has it that Kneale was the force delaying production of Quatermass and the Pit until 1967, rather than various legal and circumstantial wranglings. That may be the case. It’s certainly true that, while it arrives at the point when the possession/devil cycle was about to incarnate (beginning with Rosemary’s Baby the following year, and lasting pretty much all the way through to The Final Conflict), it feels tailored for a different era, much as The Quatermass Conclusion arrived half a decade too late for all that hippy nonsense (albeit, similarly out of step to Milos Forman’s Hair). The picture bears little relation to the horror and dinosaurs of most of Hammer’s other output at that point either. If none of the Hammer versions live up to the TV originals, Quatermass and the Pit comes closest to succeeding in its own right. Admittedly, though, it would have taken a concertedly inept craftsman to foul up Kneale’s screenplay. 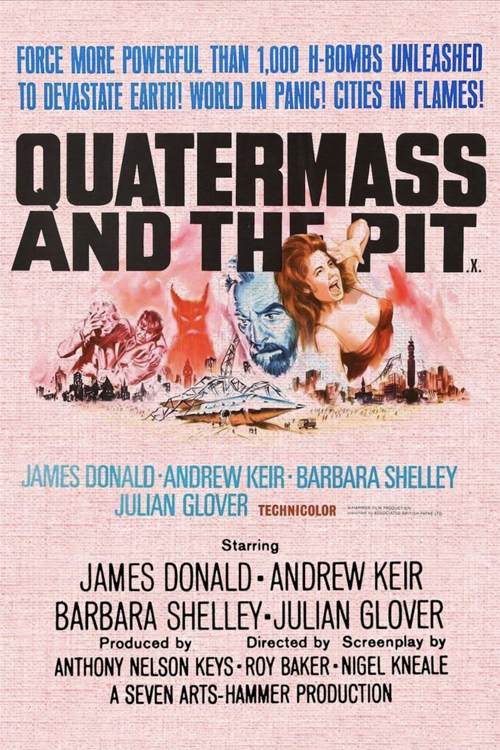