This cannot be the Rhondda Valley.

It’s worth making the most basic of compare-and-contrasts between this cheap and cheerful Amicus follow up to their reasonably successful 1974 Edgar Rice Burroughs adaptation The Land that Time Forgot (which also happens to be reasonably decent) and the subsequent year’s game-changer Star Wars. Because while a slew of cheap and cheerful Star Wars rip-offs would follow that wouldn’t look so out of place in At the Earth’s Core’s company, George Lucas’ movie instantly relegated this kind of picture to the status of a dinosaur (or Mahar).

I enjoyed the movie when I first saw it on TV, of course (my guess would have been its 1980 BBC premiere). Not nearly as much as The Land that Time Forgot, which really fired my young imagination. But still. It had dinosaurs… okay, Mahars… And a giant drill breaking through to a land in the centre of the Earth… that looked the spit of a studio set exotically exuded beneath multi-coloured lighting gels. And it had Peter Cushing… And also Troy, I mean Doug McClure. The latter’s curious tenure as a British American movie star – as if Bob Hope decided to flex his muscles – lasted about half a decade, and one can only assume he was so prolific because he was dirt cheap. But McClure also seems right for these period pictures, and his pairing with Cushing makes for an effective mix and match.

Much as the monsters in At the Earth’s Core are entirely unconvincing men in suits – albeit using some of the same blue screen techniques as the Rancor in Return of the Jedi, just less effectively – it fares better in other areas. The steam-punk drill is really quite good, and if Kevin Connor’s far from the most versatile of directors, I rather like the cramped staging of the machine’s send-off, as if posed for a dusty, faded Victorian photograph (and the cute ending, with the drill breaking surface on the White House lawn).

Cinematographer Alan Hume was no slouch, and if you’re never less than conscious of At the Earth’s Core’s set-bound realisation, it also has a suitably intense, sweaty lustre (Hume worked on everything from the Carry On films to The Avengers to Bond to the aforementioned Return of the Jedi). Mike Vickers’ score at times has the semblance of early John Carpenter, and some of the sound effects – the telepathic signals – could have been dropped seamlessly into Star Wars’ hugely innovative sound design.

Then there’s Peter Cushing, here playing the doddery, prat-falling daffy professor very broadly – it’s in the lineage of his earlier turn as Doctor Who in the two Amicus Dalek movies. Fast forward five months and he’s the cool, calculating evil core of Star Wars. You know, the one who orders his plodding black-clad minder about to do his dirty work.

No one else makes much of an impression, which is a shame. There’s Keith Barron, who had also been in The Land that Time Forgot, and the adolescent’s fever dream that is Caroline Munro. In contrast to Land, which had German antagonists going for it too, there’s little in the way of engaging conflict here (the inner-Earth humans fortuitously speak English, but they’re a bland bunch, even the bad eggs).

Perhaps the presentation of the Mahars is a problem; since they’re telepathic, Connor communicates a sense of their sonic control of the Sagoths, but it’s all fairly basic and rudimentary. There’s a visualised disconnect in attempting a highly intelligent race – they have books and all in the novels – depicted as lumbering men in suits that would have embarrassed Tomoyuki Tanaka. Their most salient activity is decidedly bestial, showing off their hang-gliding skills in picking off human prey.

Then there are their Sagoth servants, nominally designated ape men but visualised with a curiously porcine aspect and a slightly dubious oriental quality. Of course, such suggestive aspects of the movie don’t seem altogether a bad fit for Burroughs, often identified as racist in disposition and finding good company with a “proud” rank of literary eugenicists, including Huxley, Wells and Lovecraft. He was also big on forced sterilisation, so he’d doubtless approve of the mass effect currently sweeping the globe. Not much of that is overly driving At the Earth’s Core, though. There are allusions to the Sagoth – “They seem a pretty subhuman species, and yet the master race” – that fit the bill, but screenwriter Milton Subotsky is also happy to mock assumed imperialist superiority (“You can’t hypnotise me! I’m British!”)

Also absent are some of Burroughs’ more intriguing ideas – time is subjective in Pellucidar – but that seems entirely in keeping with a movie featuring rugged Doug leading the way. Ray Bradbury had it that Burroughs was “probably the most influential writer in the entire history of the world” but that’s a pretty big statement to quantify (his context was stimulating a whole generation of boys).

He certainly had a capacity for tapping the mythic and evocative, a strain that filtered and mixed and matched science (fiction) – life on other planets, most notably Mars – and the influence of the new spiritualism – lost continents, fabled ones beneath the Earth (but not flat ones; doubtless if he thought he could have made a mint, he’d have based a series on that too). And with an advance reptile race feeding on humans, perhaps he wasn’t so far from modern mutations of such concepts.*

As we’ve seen, attempts to bring his storytelling to a modern era have met with mixed results, requiring both revisionism to his attitudes – The Legend of Tarzan – and the realisation that his influence is so profoundly infused in stories since that a diligent adaptation could only be a little dated (the underrated John Carter).

My feeling is that Burroughs’ most mythically potent works – Pellucidar and Caspak – are the ones that ought to be looked at by any budding movie producers, as their subjects are relatively untapped in modern iterations. Perhaps because they are “scientifically” outmoded (really, that’s exactly why they represent fertile ground). Back when Burroughs was churning out his pulp, “The world may not be as we know it” was an entirely legitimate starting point. Now, with it ever-more pinned down and yet perversely less scrutinised, this may be the time to return to his imaginings.

Amicus had an adaptation of John Carter of Mars in the planning stages; they couldn’t make it happen, which is why they resorted to disappointing sequel The People that Time Forgot. It’s more the shame that some bright spark didn’t attempt to mount one of these Burroughs series with the kind of production values Lucas and Spielberg were flourishing at that time. Whether the reason is a lack of a sufficiently sympathetic filmmaker, or inherent datedness, these earlier works – and the likes of Flash Gordon, Alan Quatermain and Doc Savage – haven’t fulfilled their undoubted potential on the big screen.

*Addendum 25/11/22: Also notable in this regard is Donald Marshall’s take on the Vril/Vrill, that they were evolved prehistoric parasitic lizards surviving deep underground. While he was misinformed as to their origins, similar lore may have fed into Burroughs’ fiction. 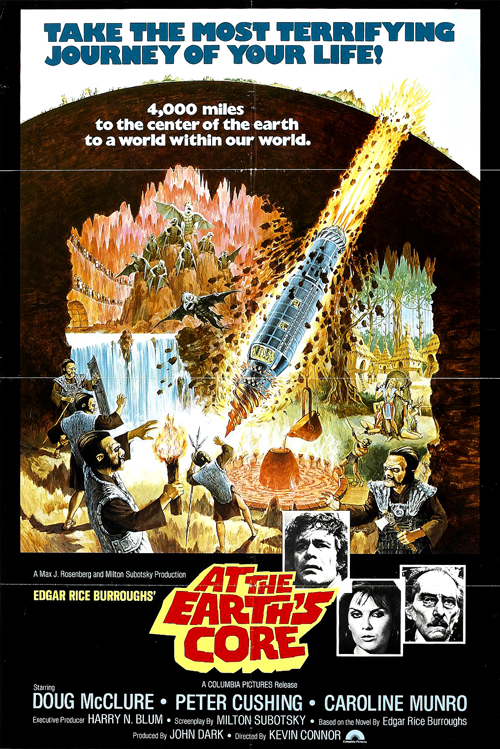