Tony Richardson’s follow up to Tom Jones rather suggests his success with that film was an accident (I’m an unabashed fan, and regard it as a rare Best Picture Oscar winner the Academy got right). More likely, it was a case of the very things that worked for Jones… didn’t so much for The Loved One. The movie entertains consistently – it couldn’t really not with that cast – but it never feels quite as incisive or as effective as it should, Waugh’s eviscerating satire ending up rather too broad and scattershot.

Pauline Kael labelled The Loved One “a triumphant disaster”, suggesting “although it’s a bad movie, it is funny”. And that verdict isn’t too wide of the mark. It’s at once “modern” but indebted to an older, more literary style of satire (it ought to be, adapted from Evelyn Waugh’s 1948 The Loved One: An Anglo-American Tragedy; it was based on his experience of visiting the US at MGM’s expense as they attempted to persuade him to sell the rights for Brideshead Revisited. Which, amusingly, he had zero intention of giving up).

So the picture is replete with exaggerated visual motifs and performances, but without any underlying stylistic sensibility on Richardson’s part. Other than Haskell Wexler’s black and white cinematography, that is, which many have praised. For me, though, married to Richardson’s lack of élan, it leaves the picture feeling rather flat and undernourished. Kael put it well when she suggested “From the look of the movie, Richardson wasn’t sure what he was doing, shot every plausible idea that came up, and then…. chopped it up and slapped it together hard, trying to use overlapping sound to plug the holes”. She further suggested the introduction of Paul Williams’ character was staged as if for daytime television, another sentiment that rings true. With Tom Jones, the jarring immediacy of the approach revitalised a potentially stodgy period setting. With The Loved One, it just looks like carelessness.

That’s compounded by a feeling that everything’s just too… busy. It isn’t necessarily that there’s no room to breathe, more that the breathing is entirely irregular. The gags and visuals and characters and targets in Christopher Isherwood and Terry Southern’s screenplay – Southern had just come off an Oscar nomination for Dr. Strangelove – come tumbling out, frequently amusingly, taking in the funeral business, the motion picture business, the fickleness of employment, courting rites, familial bonds and – suitably enough, given Richardson’s most famous scene in Tom Jones – gluttony, but often with no discernible guiding light to accompany the overstuffed melange. Other than a facility for the grotesque (hence “The Motion Picture with Something to Offend Everyone!” But really, The Loved One doesn’t seem more than a trifle naughtier than most British satirical comedies of the previous decade).

Robert Morse, still a year away from his most identifiable screen role (returning to his most identifiable stage role in How to Succeed in Business Without Really Trying) is winningly scurrilous and opportunist as a poet attempting to woo mortuary cosmetician Aimee Thanatogenos (the becoming Anjanette Comer, later the lead in the warped and unbecoming Baby). Morse’s English accent is fine, which may be because “every word that I say is looped”. His knowing comedic poise isn’t a million miles from How to Succeed in Business; it’s been said Morse is too wacky to convey Waugh’s lead character, but you can hardly fault him for responding to the madness around him.

Ms Thanatogenos is also the object of the attentions of Rod Steiger’s Mr Joyboy, an extraordinary creation. Imagine an Oscar-winning Actor indulging an inflamed piece of campery by way of a studied exploration of the works of Benny Hill. His relationship with his mother exceeds even that, perhaps the part of The Loved One where everything truly coalesces into a queasy “splendour”. Ms Thanatogenos’ horror upon arriving for a Joyboy home-cooked meal is only exceeded by our own, as obese, bed-bound Ayllene Gibbons tucks into a whole roast suckling pig. Mother gets her TV kicks from drooling over food adverts, and the last time we see her, she has managed to topple the fridge onto herself in her hoggish attempts to extract a whole roast turkey.

Southern and Isherwood have overlaid a whole corporate scheme onto Waugh, with plans to turn Whispering Glades into a retirement home and, solving the problem of what to do with the bodies, employ Williams’ Gunther Fry to supervise sending them into space. It’s every bit as thunking a plotline as that sounds (Elon “You can tell it’s real because it looks so fake” Musk would doubtless be proud).

Jonathan Winters makes an impression in dual roles as the mercenary Reverend Wilbur Glenworthy and his decidedly less successful upwardly-mobile brother. John Gielgud is wonderful as Morse’s uncle, and Liberace is an instinctive scene stealer as Mr Starker (“Propane or butane, Mr Barlow?”) You’re left wanting more of him, but he goes AWOL after the first half hour.* That’s also the case with other small roles from Robert Morley and a quick cameo from James Coburn (as an immigration officer). Lionel Stander is also hugely memorable as the Guru Brahmin, a drunk agony aunt offering Ms Thanatogenos marriage advice.

But the picture can’t ultimately make good on these vignettes. As Kael observed, “you keep imagining what they could do if the director knew his business”. The Loved One comes across as presuming its own brilliance, which is usually a dangerous sign, and it duly falls foul of hubris. It’s far from brilliant, but it’s nevertheless a fascinatingly garish – if you can call a black-and-white film that – folly.

*Addendum 14/08/22: To be clear, that’s in no way endorsing one of the Church of Satan’s earliest members. 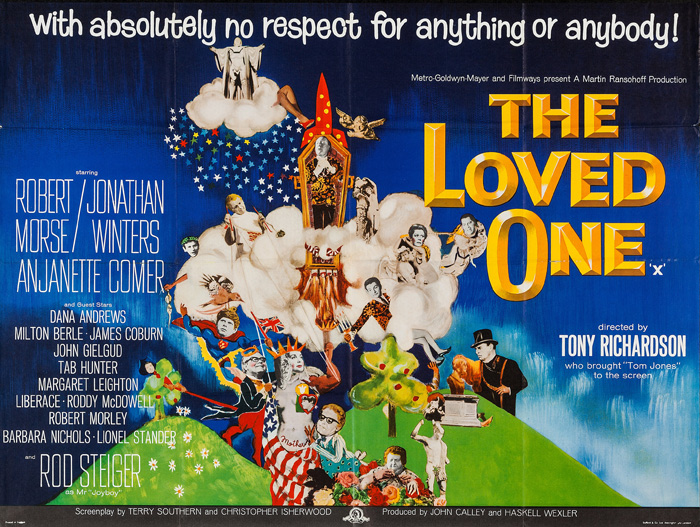