So God ordered a hit on an investment banker?

Or Arnie v Satan. And maybe, a decade earlier, it could have been a match worth catching. Or maybe not. Because End of Days simply cannot escape the fact that this is a terrible fit for the Austrian Oak. That it remains an entertaining movie – in most respects more so two decades on from its release, when it came across as no more or less than a rather desperate cash-in on pre-millennial angst – is almost entirely despite his presence.

Which reeks of irony, as Schwarzenegger was quite forthright in laying the blame for End of Days’ failure at director Peter Hyams’ door. In an interview with Harry Knowles – remember him? – he recounted how Hyams was suggested by James Cameron. Arnie, trusting Cameron implicitly, went with it (anyone familiar with Jimbo’s positive soundbites on various of the Terminator sequels will know his opinions are not to be taken seriously). Then, Hyams had the audacity – the audacity! – to veto Arnie’s suggestions for using handheld camera as “crap stuff” and proceeded to under-light his star’s BIG movie. Arnie took particular issue with Hyams’ comment that Cameron “over lights all of his sets and I don’t like the way his things look”. The thing is, Hyams is right. Cameron does over light all his sets. Take a look at Aliens again.

In a sense, though, Arnie wasn’t wrong. Not in terms of the verdict that “he did not have the potential… I think visually and intellectually to really do something with that movie” but rather to make an Arnie-appropriate action movie. Few directors do suit Arnie, because few have the requisite muscular style (pretty much Cameron, John Milius, John McTiernan, Walter Hill and Paul Verhoeven). Sam Raimi, who apparently turned End of Days down, would probably have made a decent Arnie movie, and Guillermo del Toro too (Marcus Nispel was replaced, and given his subsequent films, as well as being responsible for the Wet Wet Wet Love is All Around video, that’s probably no bad thing). The style needs to be big as its star, basically.

As does the story. It’s very easy to identify that End of Days was not conceived as an Arnie vehicle. Reputedly, Jericho Cane was envisioned for Tom Cruise, although I’m not sure an alcoholic cop grieving over his murdered family would really have done him any favours either (see Minority Report). But another, more versatile actor might have lent the part the necessary gravitas and nuance. As was increasingly the case post-True Lies and pre-governator – not helped by big projects like Crusade and I Am Legend falling apart – Arnie’s decade-long sure touch had floundered in the mid to late-90s. After Batman and Robin, Eraser and weak-sauce comedies Junior and Jingle All the Way, End of Days seemed to confirm he was batting wildly and unevenly (playing a villain in a Batman movie is sure to be a homerun, as is starring in a Christmas comedy, as is tackling millennial angst. Plus, Satan is big box office right now – see The Devil’s Advocate).

With Arnie come ever-bigger action sequences, all of which are competently staged by Hyams, as you’d expect, but also serve to emphasise that the best parts of the picture are those focussing on The Exorcist meets Sea of Love premise. Or a redux of The First Power, or Fallen, or The Hidden, if you like, with some Rosemary’s Baby thrown in (Screenwriter Andre W Marlowe didn’t fare too well with movies – Air Force One and Hollow Man also carry his name – but he went on to moderate acclaim for TV show Castle. He’s egregiously responsible for the scripted association “Christ in New York… Christine York”. Although, it sounds to me exactly the kind of gematria-tinged insight that would prove entirely credulous currently).

Cane: What about the End of Days?
Satan: Think about it as a new beginning. A change of management. And you’ll be right there with me on the ground.

End of Days would probably have been a more effective affair if it had been economically staged. When Hyams is allowed to focus on Satan’s – in the possessed body of Gabriel Byrne’s banker, or rather “Wall Street scumbag” – tenacious pursuit of his bride/mother of his child (Robin Tunny, the Christine York in question) the picture has a sense of trajectory and cohesion. It’s only when Jericho Cane lumbers into frame, offering unmodulated Arnie quips, that things fall apart.

Byrne is terrific, more so than the more acclaimed Pacino in the same role two years earlier, and very nearly singlehandedly pulls off a scene where Satan offers Jericho the return of the family he lost (“You were an honest cop. And where was God…? I can make it like it never happened. All for the price of a stranger’s address…”) Unfortunately, the scene also relies on Arnie’s ability to play emotional, so runs aground. See also Jericho’s generally appalling lines, appallingly delivered (“Now I have to believe in God in order to solve a crime?”; “Why don’t you just stop all this church talk and tell us what the hell is going on”; “Between your faith and my Glock 9mm, I’ll take my Glock”; and most excruciating of all “You’re a fucking choir boy compared to me!”)

Most of Cane’s dialogue turns to sawdust, even as he’s commendably supported by heavy-lifting Kevin Pollak (the buddy part) and Rod Steiger (the good priest part). Arnie recently delivered two more terrible performances, the first telling us of his pain over many of his family’s fascistic attitudes (someone needs to dig up his old interviews and recognise it wasn’t just his family) and pretending he’d been stuck with the RNA alterer.

Mabel: Take another Xanax to relieve your anxiety. You’re fine.

Udo Keir is dependably infernal as evil stooge Doctor Abel, until he gets his face punched through by Satan (there’s quite a bit of gore here, and Satan is generally more T1000 than he is Mephistopheles). CCH Pounder essays a fairly routine detective turned Church agent. Tunney is surprisingly strong as Christine. Not because Tunney isn’t a good actress, but because it’s yet another fairly nothing part. And then there’s Mabel, Christine’s adopted mother; Arnie being beaten up by Miriam Margolyes is possibly the greatest thing ever committed to celluloid (Arnie also apparently farted in Margloyes’ face, which is another mark against him).

Chicago: You’d be amazed what you’ll agree to when you’re on fire.

On the one hand, Satan has a propensity for kinky incest-themed threesomes and pissing gasoline, but on the other, a thing for atmosphere-draining CGI flourishes. His antagonistic status, perhaps inevitably, casts the Vatican in a positive light, which is almost as laughable as Arnie’s acting. They’re represented by a good but bloodthirsty masonic order (you know, cos masons are good, but bloodthirsty). But hey, even Dan Brown’s villains actually held Christian beliefs. Unlike, you know, the real Vatican.

There isn’t much that is genuinely literate or theological in Marlowe’s screenplay, as you might expect from its opportunistic timing (at least Strange Days had the decency to arrive four years before the big day). Accordingly, there’s much bumbling about 666 becoming 999 as the devil is all about reversals, and 31 December isn’t important in itself. What’s important is a “temporary celestial alignment” (so it isimportant).

There’s a reheated Baudelaire line – itself not actually a new one when he flourished it – that had already appeared in The Usual Suspects and ought to have turned up in The Devil’s Advocate about the devil’s greatest trick being convincing the world he didn’t exist. As we now know, his actual greatest trick was convincing the world there was a killer bug on the loose, and that we had to sacrifice our entire way of life in order to hold it in check.

The greatest trick of End of Days – if you think it in any way succeeded – was convincing the world he needed to come back, become corporeal and even have a kid in order to hatch his nefarious schemes. In other words, that he wasn’t running the whole kit and caboodle in a good cop, bad cop manner anyway. Much of the internal logic of Satan’s behaviour, abilities and awareness is on the wafer-thing side, but it needs to be to have Arnie as a legitimate opponent. In the end, Jericho is possessed by the devil. Arnie as Satan is about as convincing as you’d expect, but at least he can add that to his CV. He is also, shockingly shamelessly, crucified at one point. And there’s a decent, if overblown, subway chase.

Arnie dying at the end was apparently Hyams’ idea, but frankly his Terminator dying in T2 was more affecting. And that was dafter than it was affecting (I know many will disagree). The main thing to remember is that the millennium was all hype, and by the time November 1999 had come round, there had already been a cancelled Chris Carter series nurturing dwindling interest, a host of tedious Y2K fear porn and a solar eclipse, I mean cosmic alignment (yeah, one of those) that came to nought. It all seemed like a bit of a fizzle. End of Days, a bit of a fizzle, served to underline that. It’s not a bad movie, but it’s a bad Arnie movie. 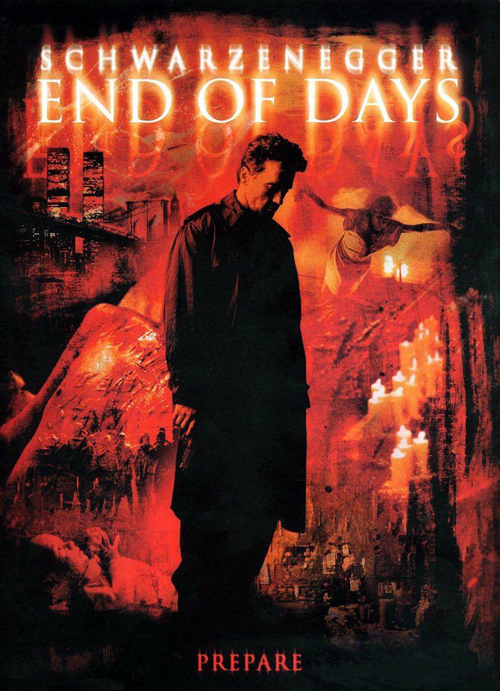