You’re even more beautiful in person than you are in real life.

I’ve always liked After the Fox, since first seeing it as a youngster, in thrall to its catnip Burt Bacharach score while simultaneously perplexed by its final reveal. It has to be admitted, though, it perhaps isn’t quite as funny as it might have been. And further, it may have been a bit too clever to have stood a chance of garnering another The Pink Panther (1963) size hit for Peter Sellers (it came complete with animated-animal titles and potential hit single from The Hollies that failed to chart). Taking shots at Fellini movies simply isn’t the kind of thing that engenders mass-audience raves.

The Fox: If only I could steal enough to become an honest man.

Because, for a movie about a brilliant master thief, Neil Simon’s screenplay spends very little time on how brilliant he is, or indeed riffing on criminal tropes. It’s far more concerned with sending up the vanity of the movie industry, its seductiveness and affinity for pseudish self-regard. It was purportedly the latter element that attracted legendary The Bicycle Thieves (1948) director Vittorio De Sica, an unlikely choice on the face of things.

Simon set out to target the art-house movie, and if Sellers’ involvement – Simon favoured a genuine Italian actor – turned it into a different beast, it also brought De Sica. If the collaboration was a less than joyous one, that shouldn’t be entirely surprising; Sellers, fuelled by several big hits and accompanying critical raves, was very much the prima donna by this stage (most conspicuously leading to his firing from the following year’s Casino Royale).

While these moviemaking sequences are amusing, they’re rarely uproariously funny, aside from Victor Mature’s winningly self-effacing turn as unaware, baffled and densely over-the-hill, “internationally handsome” Hollywood star Tony Powell (who wears his trademark trench coat in every movie). One can readily appreciate the inanity of art cinema as summoned by Sellers’ Aldo Vanucci, posing as a neo-realist director Frederico Fabrizi (uh-huh) in order to facilitate smuggling the stolen Gold of Cairo into Italy, casting his sister (Britt Ekland) as the leading lady and desperately improvising motivation and plot to Powell: “No matter how fast you run, you can never run away from yourself!” To which Powell responds with an enthusiastically indiscriminate “It’s beautiful!”

But much of the accompanying wash of eagerly dupable locals, dazzled at the thought of being stars of a real movie, is a little lacking. Lando Buzzanca makes an impression as the hapless town police chief, similarly seduced and incessantly practising his solitary line of “Good morning!” (Buzzanca would appear in another English-language comedy a few years later, essaying one of Monte Carlo or Bust’s stereotype sex-mad Italians).

Martin Balsam is the solitary rock of sanity as Powell’s manager, who knows something’s very wrong with this picture but is unable to convince his star of the same. There’s also amusement to be had when the shockingly inept footage is shown in court; a film critic leaps to its defence, claiming it “A work of art! I cried, I cried! It’s the greatest film to come out of Italy in forty years!”

The consequence, however, is that the most enjoyably comedic parts of the movie come during the early stages, when Sellers gets to dress up and assume a variety of roles, from policeman to priest, his excursions accompanied by Bacharach’s delirious score. His early scenes of incarceration, which include the novel conceit of giving his visiting friends and family difficult-to-obtain desirables, finds Aldo offered respect from fellow inmates in the manner of Noël Coward in The Italian Job (1969) a couple of years later; it’s a wonder he was never tempted to do a Godfather spoof.

There are also laughs to be had at the suspiciously over-protective brother trope, with Aldo continually putting his foot in it in his attempts to keep Gina on the straight and narrow. This extends to his dalliance with the extraordinarily pulchritudinous Maria Grazia Buccella, going rather splendidly until Aldo discovers she is the sister of his business partner Okra (Akim Tamiroff). The most memorable sequence involving the two finds Aldo making a play for Buccella while the words coming from her mouth are those of Okra (he is seated behind her, in aid of an “inconspicuous” meet). This would be riffed on by Mike Myers in Austin Powers in Goldmember (2002), with Nathan Lane and Beyoncé Knowles.

Vanucci: When I give you the signal, do nothing, absolutely nothing.

It’s possible that After the Fox’s director wasn’t the man to mine the material’s comic potential to the max. Simon opined that De Sica’s editors didn’t understand the jokes, and that even recut, many funny moments were lost. Certainly, revisiting the final scene with Sellers at his most post-modern (or conversely, Goonish), what strikes me now is not the absurdity, but that the timing is off. As if he told De Sica his notion, and Di Sica didn’t really understand but let him run with it. Much as I appreciate the puncturing of Fellini et al, I can’t help but conclude the movie After the Fox was sold as, with its daring cartoon fox bank robber and exaggerated Frazetti poster design, would have been a much funnier one. 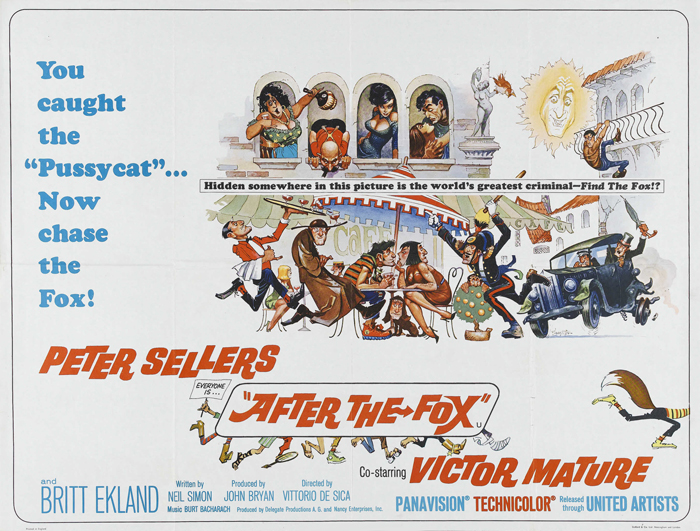 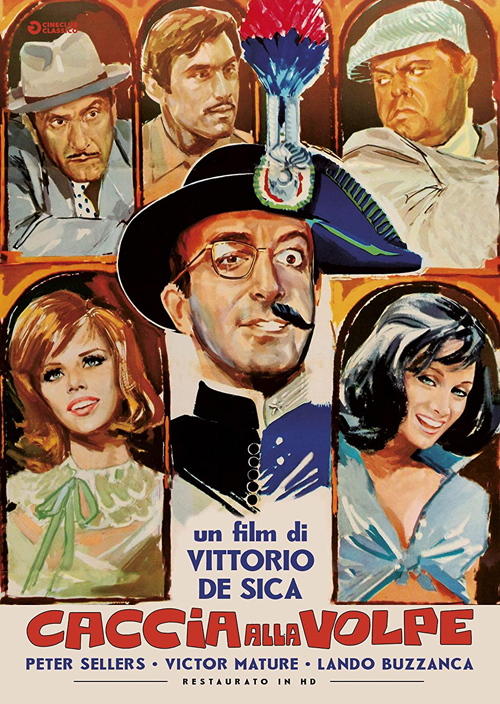