You were a few blocks away? What’d you see it with, a telescope?

John Carpenter’s first serial-killer screenplay to get made, The Eyes of Laura Mars came out nearly three months before Halloween. You know, the movie that made the director’s name. And then some. He wasn’t best pleased with the results of The Eyes of Laura Mars, which ended up co-credited to David Zelag Goodman (Straw Dogs, Logan’s Run) as part of an attempt by producer Jon Peters to manufacture a star vehicle for then-belle Barbra Streisand: “The original script was very good, I thought. But it got shat upon”. Which isn’t sour grapes on Carpenter’s part. The finished movie bears ready evidence of such tampering, not least in the reveal of the killer (different in Carpenter’s conception). Its best features are the so-uncleanly-you-can-taste-it ’70s New York milieu and the guest cast, but even as an early example of the sub-genre, it’s burdened by all the failings inherit with this kind of fare.

Streisand dropped out because the subject matter wasn’t her thing (too “kinky” as Peters later put it). She was replaced by Faye Dunaway, who’d appeared in a number of hits during the previous decade yet had proved a firmly resistible box-office draw in her own right; The Eyes of Laura Mars duly performed respectably, but it wasn’t the hit it ought to have been. Certainly, given the amount Peters spent on it (not least in publicity). The aftereffect of Streisand’s involvement was a song for the soundtrack, a soundtrack that goes to lengths as notable as the location shoot to establish a sense of time and place, awash as it is with synth disco – most notably Let’s All Chant, but not the Pat and Mick version, alas – mainly during Laura’s photoshoots.

These photoshoots have made Laura Mars famous, owing to her Helmut Newton-tinged marriage of sex and violence. It emerges that her disturbed style has been formed through flashes of images she’s been privy to over the past couple of years. Now, though, she is experiencing full-blown visions of murderous acts. Acts perpetrated on those she knows. Director Irvin Kershner duly presents a roster of possible perpetrators, including her flamboyant friend Donald (René Auberjonois rocking a Barry Manilow look), her driver Tommy (Brad Dourif in his third film role, and since he’s already been typecast as unhinged, clearly earmarked as Suspect Number One) and her ex-husband Michael (Raul Julia).

Investigating the case is Tommy Lee Jones’ police lieutenant John Neville. For various reasons, he’s the least likely person to have committed these crimes, so when it turns out to have been him all along, it rather undercuts Kersh’s stated desire to inject realism into the proceedings (“the original script was a trick, and I didn’t want that trick. I wanted it to be a result of psychological truth”).

The Wiki summary suggests Neville’s behaviour is down to multiple personalities (reasonable, to the extent that he has only just empathically spent time berating Frank Adonis’ Sal for gunning down Tommy with “He didn’t even know what he’s doing, Sal. He’s sick, Sal. He’s sick!”) If so, then it’s another risible Hollywood take on multiple personalities (MKUltra only occasionally gets an overt look-in from Tinseltown, but that’s probably a good thing if insights are coming via Max Landis). Carpenter, it seems, had an idea very much in line with Michael Myers’ unmotivated massacres, in the form of a killer unknown to the audience.

If the picture never rises above the structural stir and repeat of Laura getting a vision, vision getting killed, Laura getting another vision, whittling down suspects and offering an occasional red herring, as all the while she gets it on with the copper, it is nevertheless diverting due to its more than solid cast. Julia’s unable to do much with a few scenes as Laura’s alcoholic ex, but Dourif’s a typically nervy livewire while Auberjonois relishes all the best lines (“Hey, I do a terrific Lloyd Bridges” he tells a cop at one point, before proving it).

Kershner can thank the movie for getting him The Empire Strikes Back gig – purportedly, an early rough-cut impressed George Lucas – but there’s little here (or indeed, in his work either side of that classic) to suggest the finesse and detail of his Star Wars foray. There are some fine compositions, yes, but little real sense of creative vision outside of Laura’s photography. Indeed, the Laura-eyed view, all gauzy POV, is particularly uninspired. And as Carpenter pointed out in his critique, the director’s decisions, far from supporting them, rather went against notions of realism (“In my version Laura Mars was a crime photographer. Also, I think Irvin Kershner failed at making the visual style of the visions compelling. Finally, if you could see through someone else’s eyes you would be essentially blind to your own surroundings. You’d experience vertigo, lose your balance, etc.”)

By changing Laura to a fashion photographer, Kershner seems to be striving for a slice of lofty commentary about on that world’s treatment of women. Except that there’s little sense of such thematic content in the final film, aside from Laura’s statement on her art (“I’ve seen all kinds of murder. Physical yes, but moral, spiritual and emotional. I can’t stop it, but I can show it”). And, of course, Kershner’s professed envisaging would make Laura herself a perpetrator.

Production values aside, the only element that really sets the picture apart from serial-killer outings to follow is how scrupulously Kersh avoids lashings of the red stuff. But if he isn’t attempting to titillate by slasher standards, The Eyes of Laura Mars’ leery structure more than does that job for him. 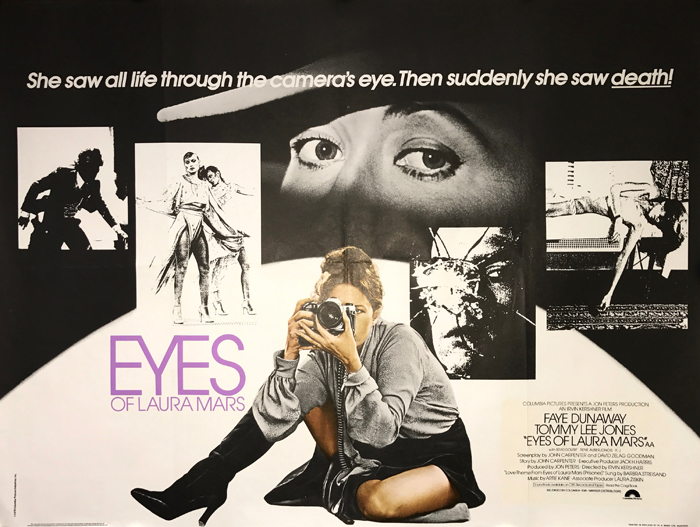