The gods are best served by those who want their help least.

I dare say post-Star Wars generations tend to see Ray Harryhausen and his ilk as a hoary old joke. But even as one who was the right age to be fully on board with the shiny new cinema of Lucas and Spielberg, the period before any of their fare reached television, when it was populated by all sorts of movies – 20,000 Leagues Under the Sea, The Valley of the Gwangi, The Land that Time Forgot, Doc Savage: Man of Bronze – that would now generally be regarded as less salutatory fodder, was in fact a kindling of the imagination. And Harryhausen influenced a slew of filmmakers, rabid acolytes including the aforementioned, John Landis and Sam Raimi. He was, after all, overtly about spectacle, which is why – not unlike latter-day blockbusters – you tended to be short-changed with regard to solid characterisation or performances from the main protagonists (if you can easily distinguish the leads of the Sinbads, or Jason, you’re a better fan than I am). Jason and the Argonauts was a formative picture, hugely impressive in many respects. It still is. Yes, it’s as creaky as Talos in places, but there’s a reason this one, rather than Clash of the Titans nearly twenty years later, gets the lion’s share of the plaudits.

Not that Clash of the Titans didn’t reap decent box office, hitching a ride on the fantasy boom Lucas ignited through embracing just enough of that cuteness – Bubo the mechanical owl – to blend the old ways and the new. It didn’t, however, convince MGM to finance Force of the Trojans (something of a melange of mythic creatures and encounters en route to Aeneas’ founding of Rome, by the sound of it). As Harryhausen tells it, Jason and the Argonauts’ success was mostly in afterlife reputation – although business was brisk in the Britain – and he considered the Academy failing even to nominate the picture for Best Visual Effects was partly to blame.

One of the issues that does need to be recognised with these earlier effects films, and you name it, is that, in contrast to the later wunderkinds, there was little creative acumen in marrying the director with the effects maestro. You’re not going to be caught mistaking any of the directors associated with bringing Harryhausen’s vision to the screen for secret auteurs. And if Don Chaffey was one of the better ones – he’d also helm several Hammers and Pete’s Dragon, as well a slew of quality episodes of ’60s TV including four episodes of The Prisoner and five of The Avengers; unfortunately, he ended up jobbing on indifferent US shows, the likes of Airwolf, TJ Hooker, MacGyver and Matt Houston – he wasn’t someone particular adept at making the human element as compelling as the armies of skeletons and winged harpies.

Which means Jason and the Argonauts relies on its supporting cast to enliven the dead air between strange encounters. Olympus is pretty much sorted, with a very authoritative Honor Blackman as Hera, the devoted deity protector of Todd Armstrong’s Jason. Blackman was still in The Avengers at this point (she would leave to make Goldfinger) but it’s evidence of her ascending currency that she was, effectively, the leading lady (yes, you can make a case for Nancy Kovak’s Medea, but she arrives quite late in the game, doesn’t do much – less still the grisly activities that make her memorable in the myths – and like Armstrong, she suffers the indignity of being dubbed).

Niall MacGinnis is strangely perfect as Zeus. Sure, Laurence Olivier is more authoritarian in Clash of the Titans, but MacGinnis’ portly joviality, yet with underlying firmness, lends the appropriate two-edged quality that goes with being a big-cheese god who rather sees humanity as playthings (and has the effective chess board to convey the same). Michael Gwynn (later Lord Melbury in Fawlty Towers’ first episode) is a bit on the camp side as Hermes, which is probably about right.

Aside from them, there’s only Bill Gudgeon, who offers some decent slow-motion exertion along with a convincingly flicking tail as sea god Triton – Poseidon’s son, but a ringer – during the Clashing Rocks encounter. Nevertheless, for all that it is sparsely populated, this vision of Olympus is simple but effective. So much so, it’s probably the first thing many of us go to when conjuring an image of the Greek gods’ mountainous residence (all ionic columns and friezes).

As for the humans, Nigel Green’s unlikely – as in, he’s no Schwarzenegger, and you just have to go forward a couple of years to The Ipcress File for a more typical role – Hercules is a surprising hit. So much so, you miss him when he stays behind to search for chum Hylas (John Cairney). There’s also Gary Raymond as Acastus – a bad guy in this iteration – but he isn’t terribly interesting, and Laurence Naismith as Argus (think chunky). That’s really it, though. If you didn’t know Jason and the Argonauts wasn’t the first choice of title (there’d already been a Jason and the Golden Fleece) you’d think there was something a bit suss in the lack of individualisation of the title characters.

Fortunately, Pat Troughton’s also on hand as blind Phineus, beset by heartless harpies, and Jack Gwillim as King Aeëtes (the fiend responsible for sowing the Hydra’s teeth). Both would later return to Harryhausen projects, the former in Sinbad and the Eye of the Tiger, the latter as Poseidon in Clash of the Titans. And there’s Douglas Wilmer as Pelias, who initiates Jason’s quest in a “that’ll get him out of the way so he doesn’t do for me” piece of “cunning”.

Very oddly, since Harryhausen says there was no explicit plan to make a sequel, the movie ends without Jason confronting the man who killed his father and thus fulfilling the prophecy and serving justice. You wonder at whoever signed off on the script conferences (the screenplay is credited to Beverly Cross – later of Clash of the Titans – and Jan Read).

Mostly, though, Jason and the Argonauts is about the set pieces. The first, with bronze giant Talos, is still mighty. Based on an early automaton legend involving technocrat god Hephaestus but rather inflated in size by Harryhausen so as to invoke the Colossus of Rhodes, it’s a piece of stop motion entirely suited to the slightly unreal (like the skeletons in that respect). The effectiveness is added to by outstanding and unnerving sound effects (Bernard Herrmann’s score is superb too). I think the harpies sequence was always my favourite, though; there’s something very primal about their purpose and realisation, essentially existing to torment Phineus, resigning him to a state of purgatorial misery. The Hydra and skeletons are impressive – and the latter, of course, was a major influence on Raimi’s Army of Darkness – but it’s these early encounters that stayed with me the most.

So yes, when the stop motion isn’t up there on screen, the drawbacks of a Harryhausen picture tend to be starkly in evidence. But for all the playing fast and loose with specifics, there’s a respect for the essential myths in his work, not least Jason and the Argonauts, that is absent from later versions, be that the unholy mess of the Clash of the Titans remake(s) or the gods-free attempt at The Iliad (Troy). Gods doing what gods do, heroes doing what heroes do, and Harryhausen manifesting fantastic beasts in between. 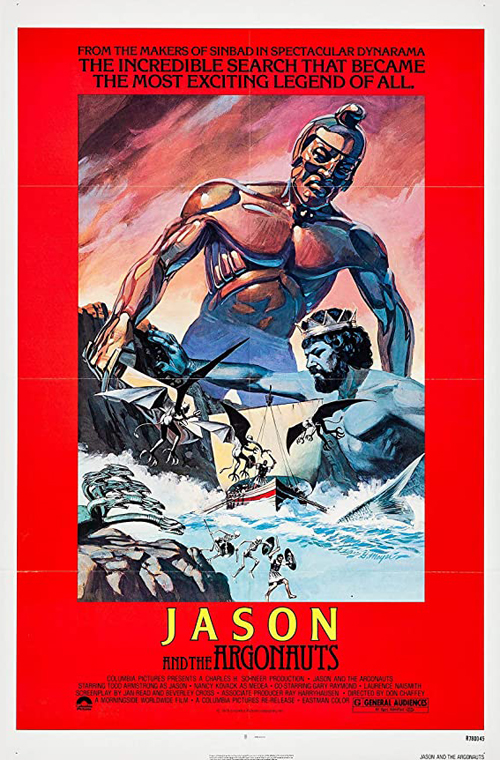