One final thing I have to do, and then I’ll be free of the past.

I’ll readily admit my Hitchcock tastes broadly tend to reflect the “consensus”, but Vertigo is one where I break ranks. To a degree. Not that I think it’s in any way a bad film, but I respect it rather than truly rate it. Certainly, I can’t get on board with Sight & Sound enthroning it as the best film ever made (in its 2012’s critics poll). That said, from a technical point of view, it is probably Hitch’s peak moment. And in that regard, certainly counts as one of his few colour pictures that can be placed alongside his black-and-white ones. It’s also clearly a personal undertaking, a medley of his voyeuristic obsessions (based on D’entre les morts by Pierre Boileau and Thomas Narcejac).

Judy: Well… you don’t look very much like Jack the Ripper…

Actually, revisiting Vertigo, I was most conscious throughout of how it has informed Brian De Palma’s career, above and beyond any other Hitchcock film. Obsession (1976) is the obvious example, but more than in mere narrative terms, I’m thinking of the manner in which De Palma favoured meticulously designed, extended and wordless suspense sequences (or just plain sequences). You can see the influence of the early tailing of Kim Novak’s Madeleine in a tauter form in the likes of not dissimilar episodes in the Psycho-inspired Dressed to Kill (the art gallery) and Body Double (the panties pursuit).

Scottie: I’ve always said you were wasting your time in the underwear department.

Geoff Andrews in Time Out called Vertigo “Brilliant but despicably cynical” and “slow but totally compelling”. I think that’s where I diverge. Not with the slowness, which is fine, but the being totally compelled part. It may sound a little facile, but I don’t find myself caring about any of the characters here, barring the very human Midge (Barbara Bel Geddes, later of Dallas). As a consequence, my interest in the story as it unfolds always becomes rather detached, clinical. I can only respect Hitchcock’s accomplishment, rather than obsess over it as he would.

On the other hand, that’s not to say I remotely relate to Orson Welles’ outspoken criticisms of the film. He didn’t like Rear Window either, it turns out (“Everything is stupid about it” – something you might easily argue of The Other Side of the Wind). But Vertigo, “That’s worse” and “I think he was senile a long time before he died”. Ouch.

Official: But we are not here to pass judgement on Mr Ferguson’s lack of initiative.

One problem with Vertigo is that the murder plot is nonsense, really. Not necessarily an issue with a Hitchcock movie where he keeps up the pace and doesn’t allow you time to reflect (his next picture, for example). Here however, every development invites introspection and interrogation. Even assuming you buy into the train of events planned by Gavin Elster (Tom Helmore) playing out as they do, you’re left with James Stewart’s Scottie as a curiously distancing protagonist.

Scottie: It’s no dream. You’ve been here before.

I mean, obviously, we’re not supposed to be on board with his insanely consumed desire to reincarnate Madeleine as Judy; Kim Novak plays Judy’s increasing disintegration in the face of Scottie’s grim determination convincingly. It’s more that, the more Hitch doubles down on it, the more absurd the scenario becomes (and this isn’t one of his comedies). On one level, he actually made a very wise decision to (very inelegantly) undercut the suspense plot – and the unfolding of the novel – halfway through by revealing that Judy and Madeleine are one and the same person. It means the logistics of the hows are pushed to one side in favour of the ramifications of all this on Scottie’s psyche. But that in turn requires you to be fully engaged with his deranged path, and to believe in his necrotic fixation.

Scottie: And you know something, doctor? I don’t think Mozart’s going to help at all.

I can’t make that leap. Perhaps Hitch was correct to criticise Stewart’s age when the picture fizzled (he considered him too old, which may explain his failure to use him again). Or perhaps he was right that Novak wasn’t quite right. She’s extremely pulchritudinous, but that rather serves to suggest that Scottie’s obsession is, at its root, decidedly un-exotic and rather base in its impulses (notably, when he fishes her out of San Francisco bay, he doesn’t rush to get her medical attention but instead takes her back to his apartment, undresses her and puts her to bed).

Judy: Scottie, what are you doing?
Scottie: I’m trying to buy a suit.

Hitch costumes Novak and photographs her with extraordinary precision, but the result serves to emphasise that the only element between the protagonists – and the director with his female star – is objectification. Which means, even with Scottie projecting on her as part of the plot – albeit, she really does love him, in the kind of development that could only be a movie twistedness twist – we can’t really move beyond there being no spark or chemistry between Stewart and Novak.

Scottie: Judy, please. It can’t matter to you.

Would Vera Miles (who modelled for the painting of Carlotta Valdes and was cast, before her pregnancy nixed plans) have been better? Well, she held her own opposite Henry Fonda in Hitch’s previous film The Wrong Man (1956), so I suspect so. But it would have been a very different picture. The “one-dimensionality” of Scottie’s obsession rather becomes the point with Novak. With Miles, you’d have felt something, so the inevitable bleakness of it all would likely have been less precise, relentless, cruel. But it might also have seemed motivated.

There’s so much that dazzles here, though. The trip-tastic opening titles are a masterpiece in themselves (later revisited in Scotty’s fever dream). The opening rooftop chase finds us joining the proceedings mid-plot – later riffed on in the opening of The Matrix (1999) – and is the most action packed the picture gets. Scottie’s character massacre, dealt by Henry Jones’ coroner, is horrifying. The restaurant Scottie visits, first seeing Madeleine there, represents a descent into hell with its infernal décor. Bernard Herrmann’s score is superlative. But overall, I’m cool on Vertigo. It doesn’t make me giddy or reel in a faint.

Jay Dyer points to Vertigo as an illustration mind control, doubling and voyeurism “on the part of a shadowy Bohemian Grove-esque elite”; it represents “an insight into the control and manipulation we see from those who are our masters”. To sell this case, he points to Elster’s background in the shipping business (elite wealth and links to mind control), and quotes Fritz Springmeier, who considered the director “was familiar with the occult world and some of their mind control techniques” (before adding pointedly that he had a knighthood). Dyer emphasises the possibility that Judy’s death at the end is MKUltra suicide programming. However, the muddle of Vertigo’s plot is further muddled by Dyer trying to disentangle why Scottie would be inveigled by a man so powerful for such an absurd scheme: his solution is that this elaborate process is designed to split his personality. Which comes back to why Scottie? 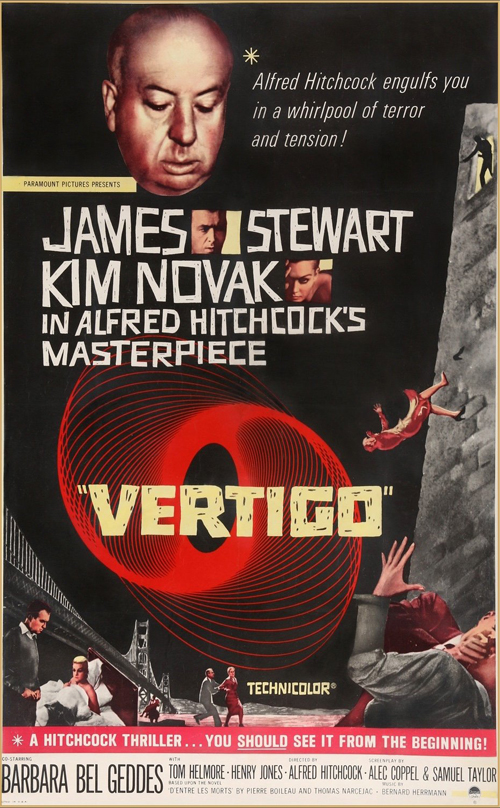