If you don’t hear from me by midnight, feed my fish.

The X-Files
5.18: The Pine Bluff Variant

I had a hankering to revisit this one because I remembered it as a first-rate “What-If?” What if The X-Files eschewed the supernatural/aliens/sci-fi and was instead a straight FBI drama show? Because The Pine Bluff Variant is played pretty much on that level, courtesy of series supremo director Rob Bowman. I’d pretty much forgotten anything else about it besides Mulder going undercover and mustering palpable tension as a result. There is, inevitably, a science-fiction element, courtesy of a flesh-eating biotoxin, but its presence is almost an apologia to anyone affronted by the otherwise lack of weirdness.

Of course, we know or should by now that the entire field of contagion is rife with lies and obfuscation, not least whatever it is our governments get up to in their biowarfare labs if they’re unable to fashion deadly viruses they have no intention of unleashing on the world. In the defence of The Pine Bluff Variant, its extravagant bio-agent isn’t in the realm of high-fantasy airborne viruses mutating and infecting anyone and everyone they come across, animal, vegetable or mineral. Rather, this one is transferred through contact. You know, in much the same way that every Ebola outbreak has purportedly and mysteriously occurred with ten miles of a US military base.

Mulder, naturally, is equally suspicious of anyone whiffing the lie of the US swearing off dark and deadly activities in that field. It’s amusing to recall how the show’s writers – in this case John Shiban, frequent collaborator with Vince Gilligan, and remains so currently with Better Call Saul – would encumber themselves with “factual” chapter and verse, in compare-and-contrast to the week’s uncanny events. Thus, we’re customarily reminded of the official line/status quo prior to Mulder and Scully uncovering much murkier truths beneath.

In this case, it’s Skinner, informing us “The United States has no bioweapons, Agent Scully. President Nixon dismantled our programme in 1969”. Naturally, the episode reveals otherwise, and that the case has been a rather convoluted, covert bioweapons test via a homegrown terrorist group (the New Spartans). Actually, this part, the infiltration and manipulation of groups, has been documented as part and parcel of routine FBI procedure. Indeed, the vast majority of their “success” stories are ones where they have manipulated or even laid the seeds for the group’s insurgent activities (ask Chris Morris).

The problem here is that there’s never quite enough sense of whys, wherefores and objectives to underpin the drama. I mean, it is enough that Mulder is up against it, because this sustains the premise effectively throughout. From Scully’s suspicion of what he is up to, to the monster-mask heist sequence – effectively homaging Point Break on a budget, and showing why Bowman deserved graduation to features, even if it was short lived.

But The Pine Bluff Variant could have been even better, had this been more coherently mapped out. Indeed, I’d much rather have seen this story as a feature-length version than Fight the Future (1998), even if that would have been giving fans exactly what they didn’t want (so rather like I Want to Believe (2008) in that sense). Shiban was reportedly inspired by John Le Carré and The Spy Who Came in from the Cold, but you can see the Heat references much more clearly. The title, meanwhile, both references an Arkansas military installation housing chemical weapons and riffs on ’70s conspiracy thrillers (The Parallax View et al), although the paranoia is closer to Sidney Lumet (and then there’s Die Hard With a Vengeance (1995) mysteriously showing at a cinema three years late, except that one also involves terrorists robbing banks).

As for the infective agent, lacing bank notes with a toxin certainly sounds like an effective method of killing people (the question lingers, if Scully hadn’t shut the bank down, would the spooks have let it get out there, and one has to assume so. After all, even if it is, by its nature, contained and non-contagious, those spreading it aren’t going to know what annoying places traces might end up). Cinemas – now an endangered species – are identified as prime places for experimental slaughter, following on from Outbreak (1995). In terms of real-world counterparts, firearms would be more popular, but scenarios such as this set the mood for their being potentially deadly ground.

Shiban drops in lots of buzz references – “highly toxic biological agent”; “hot zones”; “it would seem to be genetically engineered. A bioweapon”; “especially virulent bacterium”; “genetically engineered strep” with a “synthetic protective layer” – leading us further down the inventive path of invasive viruses. Given the dubiousness of such alleged endeavours, one might suggest Shiban is closer than he knows when he has Skinner quote the official verdict that the United States has no bioweapons. Which doesn’t mean it doesn’t have many and varied means of poisoning the populace if it so wishes. So it’s a good thing “Our government is not in the business of killing innocent civilians”.

Sure, Scully shouldn’t be doubting Mulder for a second, and Bowman’s unable to sustain Fox failing to shoot guy in the bank for as long as the scene requires (particularly with the cop out of “That weapon’s traceable”). As usual, Mulder wants to get the truth out to the people, and as usual, he is rebuked (“Well sometimes our job is to protect those people from knowing it”). Season Five, for all its failings – for a while there, until Season Six gave the show a shot in the arm, I thought it had passed its sell by date – puts the emphasis on how much Mulder doesn’t know, even within his wisdom of how much he doesn’t know.

There’s some good casting here. Daniel von Bargen (George’s boss Kruger in Seinfeld at about the same time) is strong as New Spartans leader Haley, while Sam Anderson gives great duplicity as US Attorney Leamus (he would later appear as a regular on Angel, Lost and Justified). On a shrewd character basis too, I particularly like that Mulder’s outspokenness has aligned him with the interests of a terrorist cell – as they see it (“He spoke at a UFO conference in Boston, where he apparently broadcast his feelings about the government and their conspiracies against the American people”).

Much of the time, the aliens are the insulation against The X-Files being a show in which the protagonists are essentially upholding the system’s values; The Pine Bluff Variant chips away at that (although, as Rob Shearman notes, this also makes it something of a precursor to the push-pull of 24, cautiously criticising a system through promoting its underlying values: we need a terrorist task force, because look-see. We need an FBI, because…. Etc.) 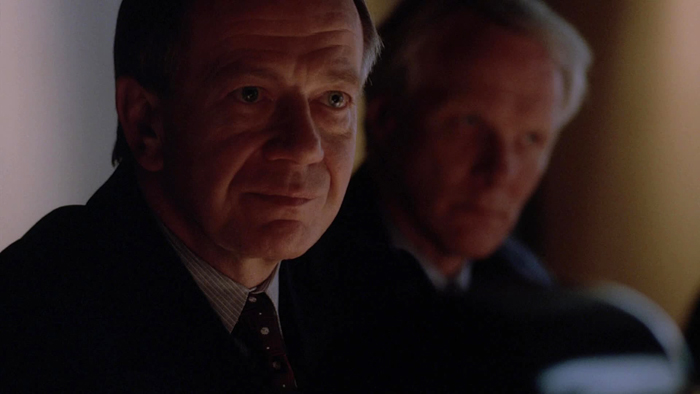 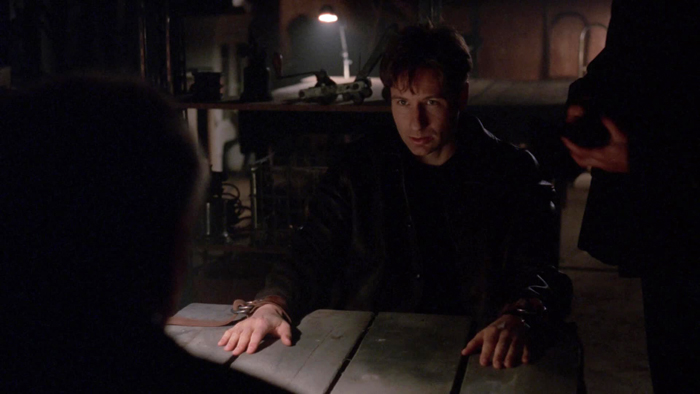 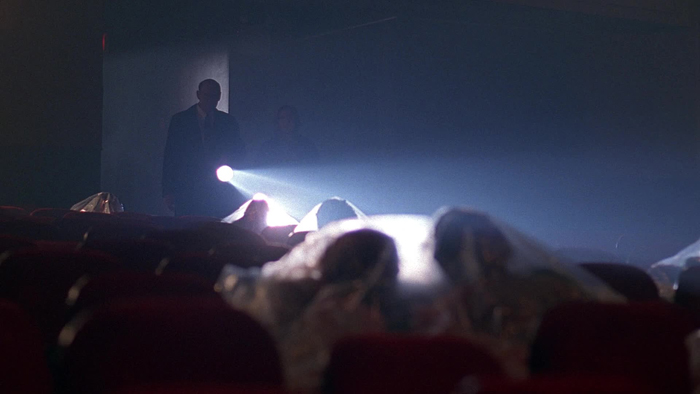 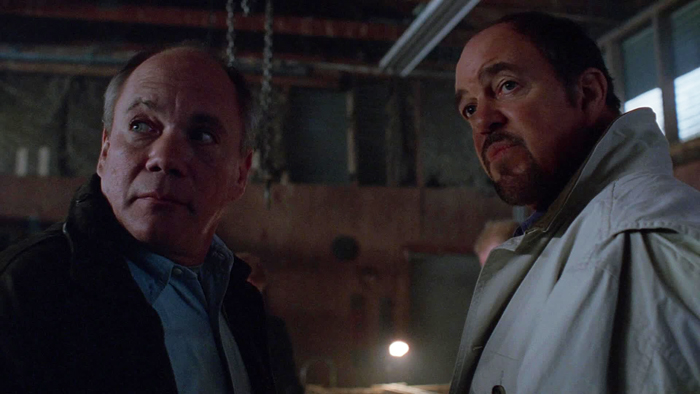 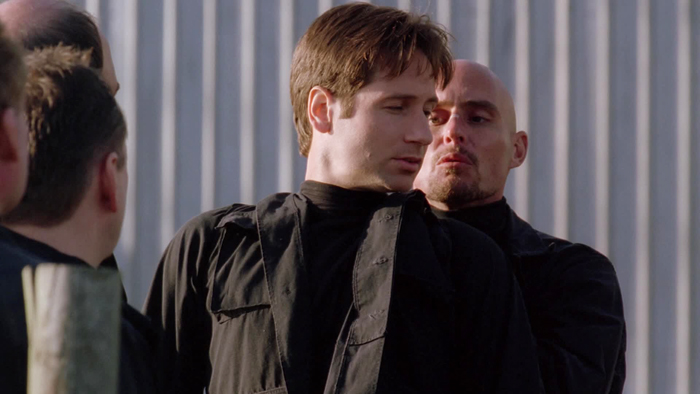 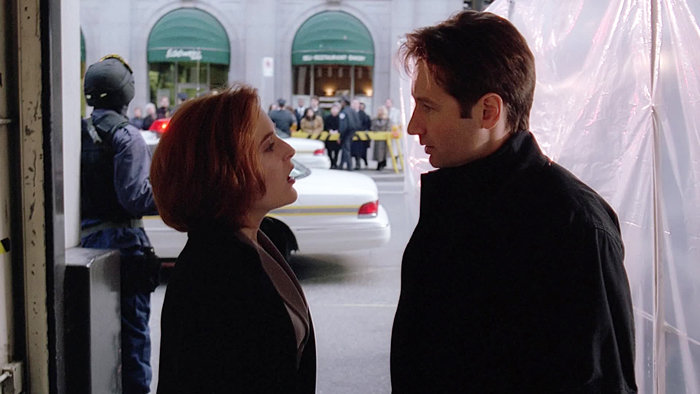